Conclusive evidence of there being Planet X there! [From January, 2002 to December, 2003]

[I] The Orbit and Path of Planet X: Overview 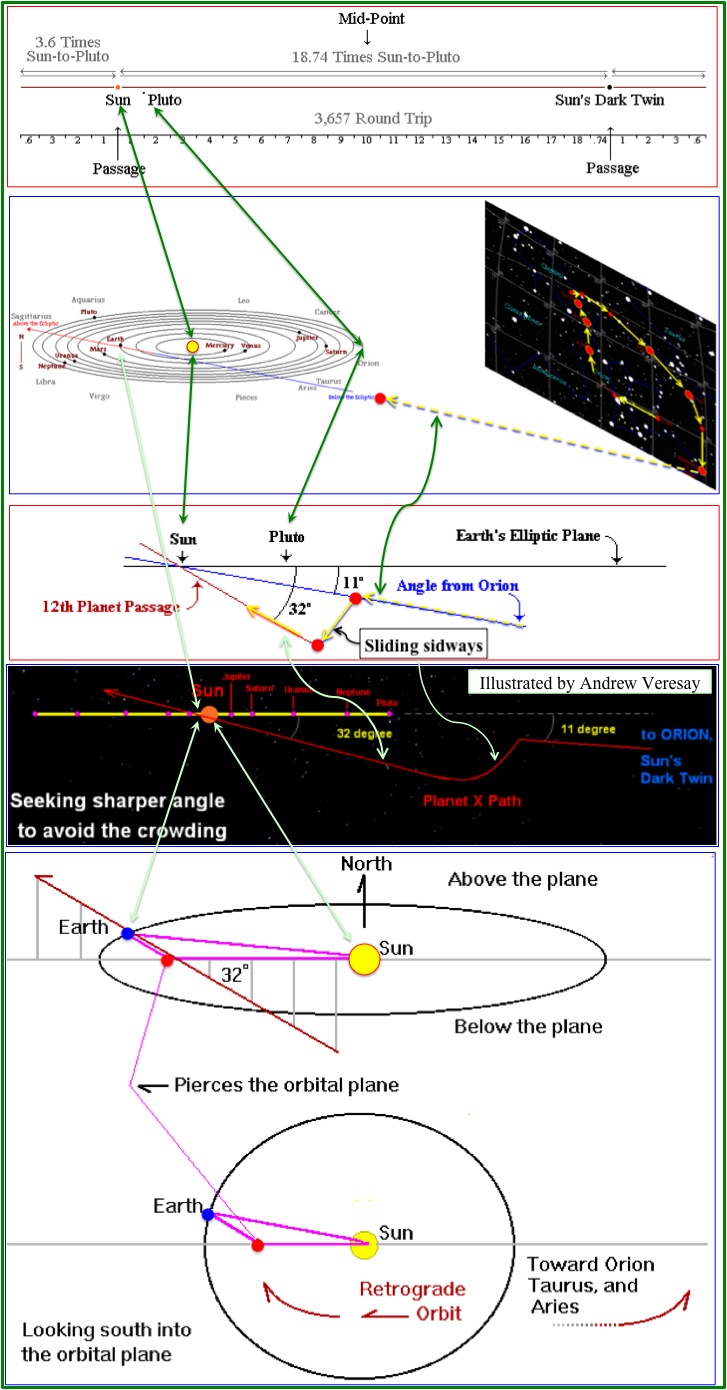 * Planet X is circling on a long elliptical orbit around the sun and its dead companion which lies at a distance some 18.724 times the length from the sun to Pluto. [Distance from Earth]

* The Zetas provided the Path of Planet X. [Path]

* It approaches from Orion at an ultimate 32 Degree Angle to the ecliptic, assuming a Retrograde Orbit.

The riddle of why Sitchen feels it may approach from Sagittarius has been solved. The Point of Passage has been diagramed.

Details on these and subsequent sightings on the TEAM page. * In 2003, Planet X Zoomed Into the Inner Solar System * Sightings, Done at Observatories in Early 2001

On Feb 7, 2001 the 12th Planet was Sighted at the coordinates given by the Zetas at a Swiss Observatory, the Neuchatel, but this appeared to have been a Non-Offical use of the observatory. 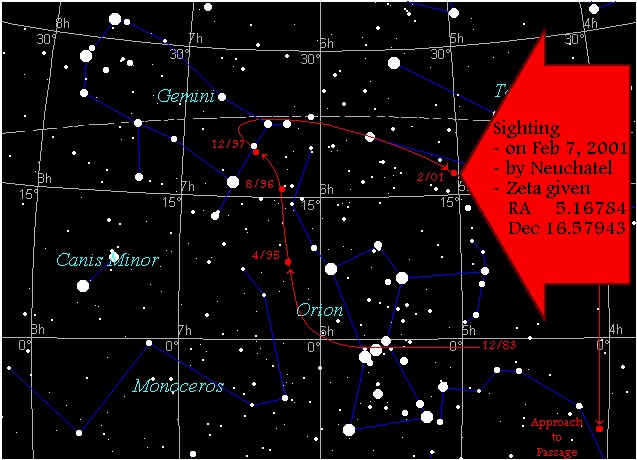 * Planet X showed up on infrared images of the sky in early 2002 moving in accordance with the Zeta coordinates.

On Jan 5, 2002, Imaging began, a New Object, Absent before, identified at the Zeta coordinates, and on Jan 19, 2002 a Second Image showed the object Moving. 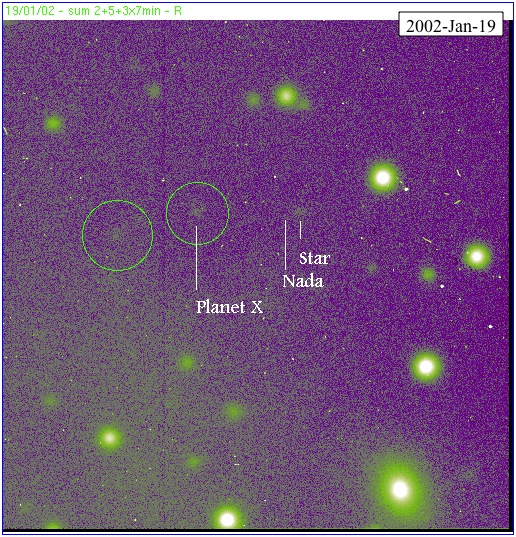 The inbound Planet X (aka Nibiru, 12th Planet, Marduk, etc.) cannot be viewed from Earth during part of the Earth's orbit around the Sun, as those gazing in that direction must look past the sun, during daylight, and light polution virtually eliminates the ability to even see bright stars. This is termed being "in the sun" by astronomers. Where ZetaTalk has stated that amateurs will be able to see it with their scopes by mid-year 2002, the spot in the sky to be viewed will only be in darkness the hour before dawn at best by very late summer to very early Fall, but by December will be visible for most of the night.

* FITS Files from CCD Cameras, Amateur Scope, Done by the Sighting Team; from Fall 2002 to Early 2003

Trends: Trends in Planet X Sighting (or Not seeing the Forest for the Trees)

When a traveler approaches a distant forest, at first the forest itself is seen, then individual trees, and as the trees themselves become the focys, the size of the forest may be lost as the traveler stops seeing the forest for the trees. Trends over the Fall 2002 viewing seasons show that:

1. Where Planet X came through in the Sum and Median (when generated) of the images, indicating presence in all frames over the background, it was often only discernable in single frames at first.

2. When at a distance, the entire Planet X complex of dust and tail and moons was taken to be Planet X, appearing as a dot. Where the brightness of this complex increased steadily during the Fall of 2002, as the complex came closer the tail and moons separated from the Planet X body, thus seeming to diminish the body relative to the rest of the complex. But when Dust Shrouding is considered, growing larger!

3. The tail first appeared as a pixel brightness haze, increasingly brighter and affecting more pixels, then seen as distinct swirls and then when the swirls overlapped, as Dense Splotches. As the complex comes closer, and spreads, the individual moons become evident and separate from each other, thus seeming to diminish the tail density.

4. As the dozens Moons began being recognized as Distinct Entities, increasingly Avis recognized as other than noise, the dense tail splotches stopped showing up in the images.

* Path Plot of Red vs White Personas vs Coordinates 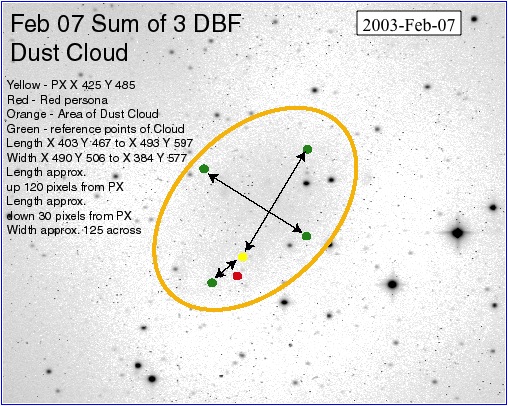 (6) Nancy's Animation suggests the personas have again moved along the coordinate path, as have JWilliam's Candidates. (Mar 9, 2003) 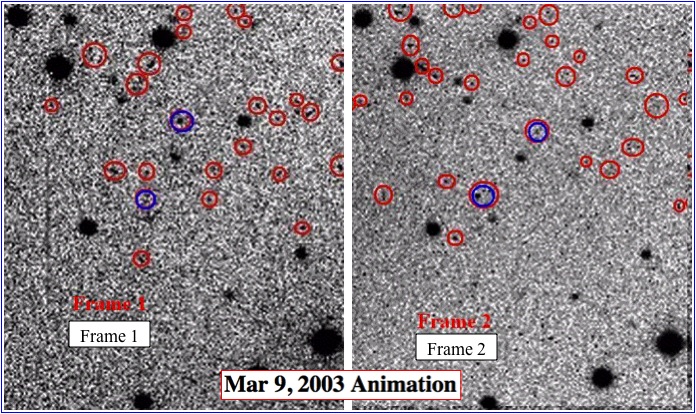 By looking for the object appears with most stability on the frames, a Red and White Persona emerge again from the new objects Steve circled. These areas have also moved along the coordinate path and are closer to the Mar 10 coordinates than to the Mar 7, 2003 coordinates.  Nancy (8) A professional photo from France focusing on the corpus, when Enhanced, showing debris. (Apr 5, 2003) 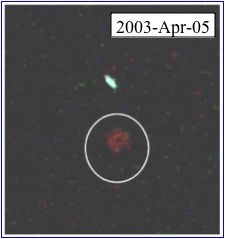 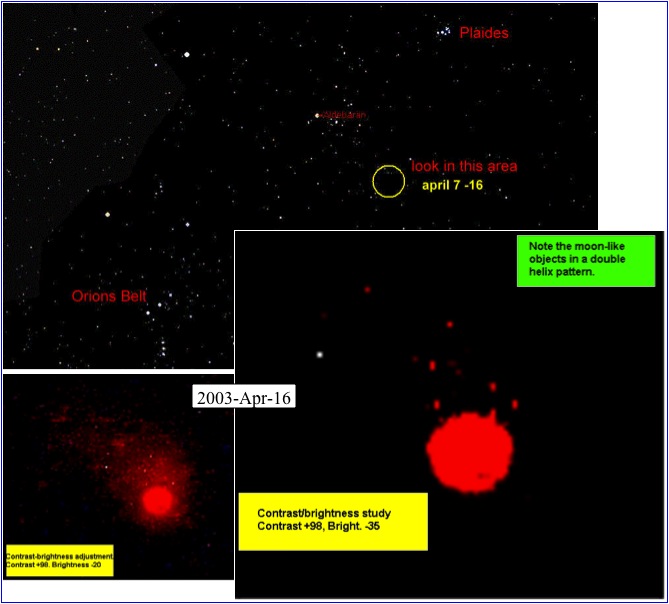 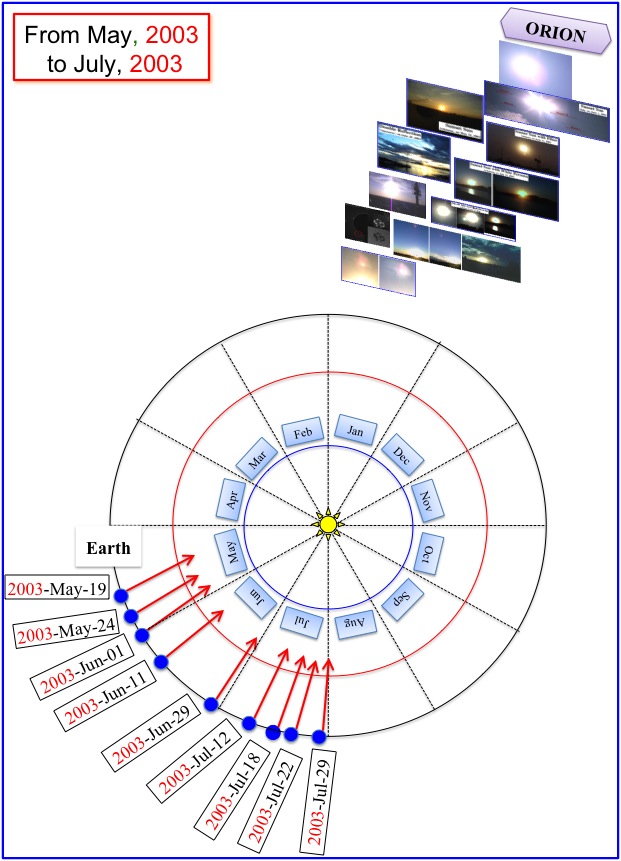 Here is a new pics of the possible Planet X, taken at approximately noon EST. This was seen with naked eye and with 4megapixel camera (full resolution). Merl and Gene, in Kentucky 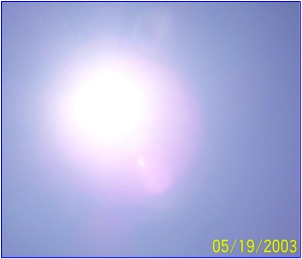 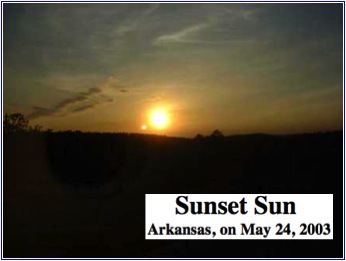 I suspect these are Planet X Moons, as it is rapidly drawing closer. This parallels what we experienced during the Fall 2002 to Spring 2003 imaging sessions via CCD camera using Arnie's Rent-A-Scope. First we saw the complex as a dot, then a tail haze, then moon swirls in the tail, then the individual moons could be identified.  Nancy

This photo was taken with a filter around 7-8 PM a few evenings ago in Ontario, Canada looking W to NW near sundown.  Garry 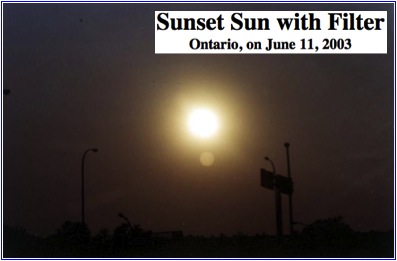 The astonishing photo capture of a double reflection is the best example of what is the buz of the day. People are reporting not only double reflections, but double shadows. When the Sun goes behind a cloud, a second shadow is dominant, from the second sun, landing at a different angle. Closer, brighter, and for those not yet able to catch a glimpse of the second sun as it is too close to the real sun to look, this is one means to determing without looking at the blinding sun, that Planet X exists, and your government is not informing you!  Nancy Note the distinct White Persona at 2 o’clock, very close to the Ecliptic, and later when the Sun sets having an indedependence from the Sun as the White Persona sets later than the Sun!  Nancy

Note the distinct Red Persona at 7 o’clock, moving again independently from the Sun. The White Persona, the actual physical location of Planet X, can also be seen at 2 o'clock in the second photo.  Nancy

I snaped these photos, sunset July 17 and sunrise of July 18 in that order. I live in northern Alberta, Canada and have great views of sun sets. All of my photos have never been altered. Your eyes in the northern sky.  Farmer

This persona, with tail, shows up both evening and following morning photos.  Nancy

This one is from July 14. I'll have to say their is definitely something out there. Your eyes in the northern skies.  Farmer 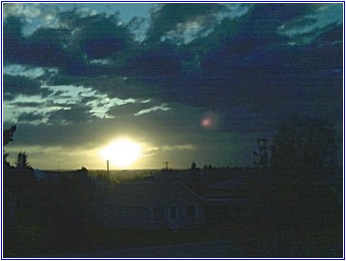 Note that in addition to the vertical pink lens flare caused by the extreme intensity of the double suns, and the elongated sun which is in fact the Sun and the Red Persona overlapping, we have the off stringers of the dust cloud seen recently from photos from Italy and Alberta! And Moons!  Nancy

Please note the placement of Planet X in this SOHO C3 capture, in the same location as a July 15 SOHO C2 Catch but closer to the Sun. It has since moved to occulting the Sun in late July.  Nancy Here's two images from Eastern Pennsylvania. The first one at about 5:30 PM and the other at about 7:30 PM. These were both taken on July 29.  Doug

Here is another that looks similar, but much larger, to photos from Alberta on July 18, when separated from the Sun by the angle of the viewer, due to latitude or time of day. Note it operates independently of the Sun. The Fire Dragon, with streaming tail of red dust, coming closer and getting larger.  Nancy 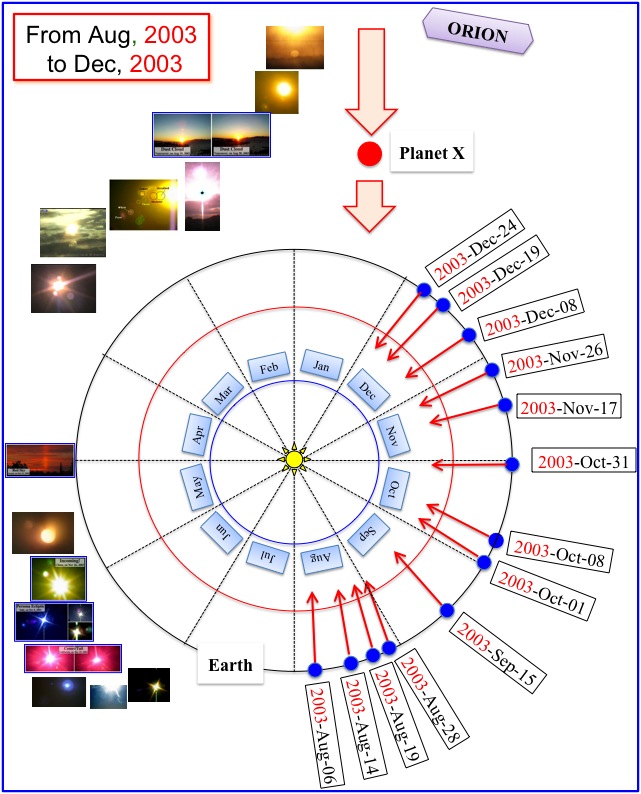 Here we see the Fire Dragon, in the second photo with two other personas or moon swirls, changing into a Monster Sun.  Nancy

Compare this to the photo from August 19. Retrograde motion as well as increased size is apparent.  Nancy

Almost entirely lost in the glare of the Sun, the Fire Dragon emerges under heavy filtering. This is why many people cannot find Planet X, when the angle is such that it is placed in front of or close to the side of the Sun's glare.  Nancy These personas do not appear to be lens flares, with the one exception a flare past the White Persona. They do not all line up from the center of the Sun as flares do. They differ in appearance and size and color. All but the White Persona are composed of bending red light that focuses depending upon many factors, including location and time of day. In the Aug 24 Ohio Lotus Flower crop circle, these personas appear to line up as they are tend to do in these photos.  Nancy 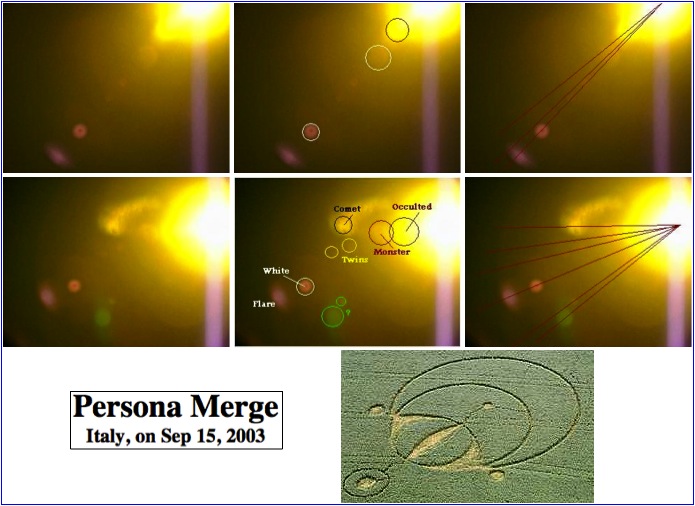 Some pictures from Niagara Falls, Canada, Oct 1st at 6:55 AM  Hussam

Standing behind the clouds, this is not a lens flare!  Nancy

This frame of video at 4:20 PM today  Alberto

This Ohio soybean crop circle, discovered Sep 28 in Highland County, implies three personas swirling about the Sun, perhaps telling us this is to be the next expected presentation of Planet X as viewed from Earth. Indeed, Alberto's photos seems to show us this!  Nancy This afternoon [Nov 16] among many clouds, this picture, cropped. Second photo around noon [Nov 17] and 1PM.  Alberto

Note on two different days and times, the Monster is along the Ecltipic on the Libra side!  Nancy

The corpus, here at 10 o'clock, with moons swirls, the triad seen in so many photos from around the world recently. Notice the brightness and size increase in the corpus of late. Note also the similarity to photos from New York, same time fram.  Nancy 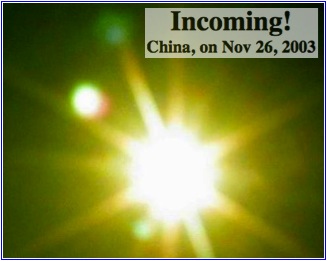 This first pic at 12:20 and seem to be the most favorable time to take more objects when sun is at meridian. Ciao.  Alberto

As the day progresses, the Planet X complex, which is within the inner solar system coming between the Earth and Sun, appears to move along the LIbra/Virgo side of the Ecliptic, but it is the viewpoint from Earth which gives this differing perspective.  Nancy

These weren’t taken through a window. I used 3 different filters over the lens - a blue, a red and a light purple and just aimed the cam at the Sun’s direction and this is what I got. I was so excited to finally capture that image. I finally got a good cam! A fugi finepix 1300 is what I used.  Donna

Note the tail heading up at 12 o'clock and Moons or Moon swirls at 4 o'clock and 5 o'clock, and a red presona occulting the Sun at 10 o'clock!. A stunning capture of what is showing up on many photos from China, Italy, and New York.  Nancy

Moons or Moon swirls to one side of the Sun! A stunning capture of what is showing up on many photos from China, Italy, and California.  Nancy

A whisp of the dust tail coming down from the Sun, and 3 Moons or Moon swirls! A stunning capture of what is showing up on many photos from Italy, New York, California.  Nancy

This one at 9:45 AM. I find very nice this image with all the contrast, which seems to me similar to what I remember we all saw during Shoumaker-Levy years ago. Ciao.  Alberto

Moons or Moon swirls in an arch and a red persona at 2 o'clock! A stunning capture of what is showing up on many photos from China, New York, and California.  Nancy