Dubai-based Emirates Integrated Telecommunications Co., better known as Du, said Monday the cuts happened on the SMW3 cable near Suez, Egypt, and on the i2i cable, which links southern India and Singapore.

Du says it is rerouting traffic over other lines while repairs are under way, but says users may still face slower Internet speeds.

There were no immediate reports of Internet outages linked to Sunday's cuts. 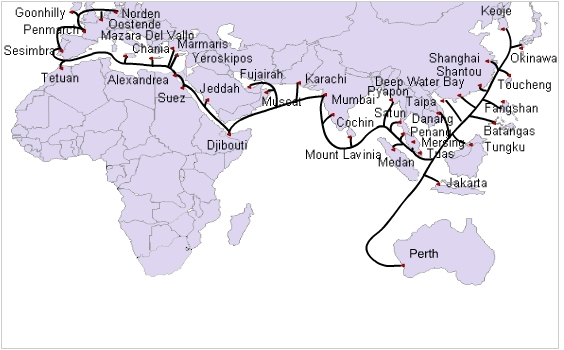 Once again an undersea internet cable is torn near where it makes landfall. This incident is in Dubai, on the other side of the Arabian Plate from Alexandria. What is similar in both of these incidents? Both are offshore from landfall sites, where the cable rises out of the seabed to connect at a spot where it is fixed. Such a spot creates tension if the cable is being stretched, causing the cable to rise up out of the seabed and reducing slack. This causes the tense cable to be vulnerable to ships' anchors. The Flag Falcon was a new cable, laid since early 2005 and thus plowed into the seabed properly and recently to avoid ships' anchors in shallow water. If the breach offshore from Alexandria was due to the stretch zone in the Mediterranean caused by the African continent rolling eastward and dropping into the Indian Ocean, what caused this stretch offshore from Dubai?
After leaving Alexandria, the cables cross the Suez Canal to land on the east of the canal, thence down the Red Sea to where it empties into the Indian Ocean, thence along the bottom of the "boot" of the Arabian peninsula and up around the "toe" formed by Oman to landfall in Dubai. As we have stated, the Arabian plate will rotateas this region of the world is pulled apart. As though the "boot" were walking, it will move from where the "heel" appears to be landing to where the "boot" is rolling to be positioned on its "toe". Where this does not put tension along a cable laid around the edges of the "boot", it puts tension on the cable from another end - the landfall in India and Pakistan. The "heel" of the boot has been pulled away from India and Pakistan. Overall, the stretch zones around the Arabian Plate are pulling open, thus there is less slack on any cables laid there.

Internet Provider in UAE Confirms Undersea Cable Cut Between Dubai, Oman, Cause Unknown February 2, 2008
An undersea cable had been cut in the Persian Gulf, causing severe phone line disruptions and compounding an already existing Internet outage across large parts of the Middle East and Asia after two other undersea cables were damaged earlier this week north of Egypt. It was not known how the underwater FLAG FALCON cable, stretching between the United Arab Emirates and Oman, had been damaged. Workers were still trying to determine how the Persian Gulf cable was cut.
Saudi Arabia Confirms Multi-Million Dollar Investement in FALCON May 7, 2005 http://www.ameinfo.com/59481.html
FALCON, a new high-capacity resilient loop cable system is being installed to provide multiple landings throughout the Gulf region, with submarine links stretching from the Middle East to Egypt in the west and, initially, to India in the east.