Colombia: An immense geological fault was detected by the authorities care and emergency prevention in Garzón 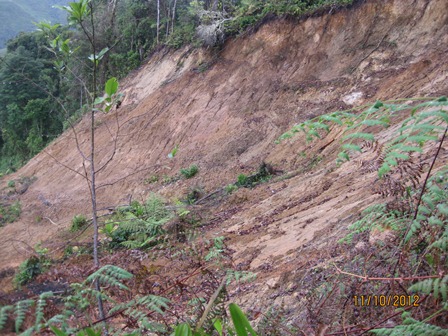 Emergency agencies detected a fault in the area of ​​Villa Rica.

A landslide of great proportions was detected by disaster prevention agencies in the top of Villa Rica, which would threaten a vast area of ​​Garzón. The rainy season rang alarm bells.

An immense geological fault was detected by the authorities care and emergency prevention in Garzón, which has put on alert the community to the top of the village Villa Rica, where cracks were found on a stretch of more than one hectare of land that threaten to slip into a ravine.

As stated by the coordinator of the local committee of the Risk Service, María Durán Aracely Vega, cracks are at least 50 meters high and 100 meters wide, threatening the stability of the ground and should generate alert between at least seven families that are focused directly on the slide area, resulting in a site survey.

"What we show is that about six months ago is evolving natural phenomenon. The land and the mountain is coming to a landfill which flows into the creek Majo, which in turn has an impact on at least two tributaries that cause the fall of total land and others, would produce an avalanche that is what we are looking to adopt mitigation measures, "Duran said Vega.

On the ground of the top of the village of Garzon was the Emergency Care Committee in full, local farmers and others familiar with this type of flaws that should guide them to take appropriate action. "Families who are on the site are seven, but the greatest danger is of the creek downstream, endangering a large number of people, due to the breadth of the cause, so it is placing an alarm system against Slip an eventuality, "reiterated the official.