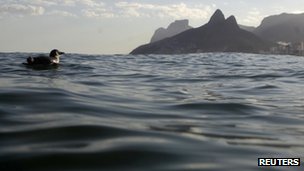 Wildlife experts are concerned and investigating after 512 Magellanic penguins washed up dead across 65 miles of the Brazilian coast, reports the Merco Press. Further worrying veterinarians is that the birds were all apparently in good health, well fed, and free from oil stains. Magellanic penguins are migratory, moving from southern Argentina to Sao Paolo at this time of year. It's not a great time for penguins in general, with the population of a major colony in Antarctica plummeting 36% since 1991.

Brazilian biologists are investigating the deaths of more than 500 penguins found washed up on the beaches of Rio Grande do Sul state.

Autopsies are being conducted on some of the birds to determine the cause of death.

Researchers said the penguins appeared to have been well-fed, with no apparent injuries and no oil on their bodies.

Magellanic Penguins migrate to southern Brazil from Patagonia every year during the southern winter.

Last week dozens of young penguins were rescued from beaches in Rio de Janeiro after straying far beyond their normal range.

The birds delighted beach-goers, but scientists said their health was suffering in the tropical waters.

Brazil's environment agency is preparing to fly those penguins back to the south.

Good news and bad news for the wildlife of Planet Earth.

Given man's rapacious nature, at the current rate of population explosion, most of the Earth's biological resources would be exterminated within decades. Those that remained, beyond cultivated crops and animals, would be deep within the sea or in barren cold places where pollution had not spread because man did not choose to live there. The cataclysms, of course, will change all that, more than evening the odds between man and nature. But were it not for the cataclysms, mankind would utterly destroy the biological diversity of this world, plundering the seas until chain reactions set in to decimate populations not even targeted by man. Penguins, who eat fish, cannot migrate to warmer climates if the fish decline - they can only weaken and succumb to the cold. Kelp beds, the great oxygen machine of the Earth, are already damaged by the harsh rays of the Sun which the depleted ozone layer is failing to filter. The kelp beds stand at the base of the food chain for many thousands of life forms, in one form or another. For instance, some life forms require the kelp beds for protection, shelter. On land man's senseless greed has left so many scars we need not retell the tragedy....

... Will these trends continue after the Transformation? They will, but due to setbacks during the cataclysms, they will essentially stop, and as attitudes will change during the Transformation, raping the Earth will cease. The Earth's natural bounty will be allowed to renew, the new race of man living in harmony, not clashing, with nature.  http://www.zetatalk.com/transfor/t15.htm

Racine Brazil will be the new north pole after the shift so it's interesting to see the areas where the penguins were found.  They're just a little early.

Posting this here as this is symptomatic of Planet X disturbing natural habitats.  Animals are on the move even to their own peril to escape danger.