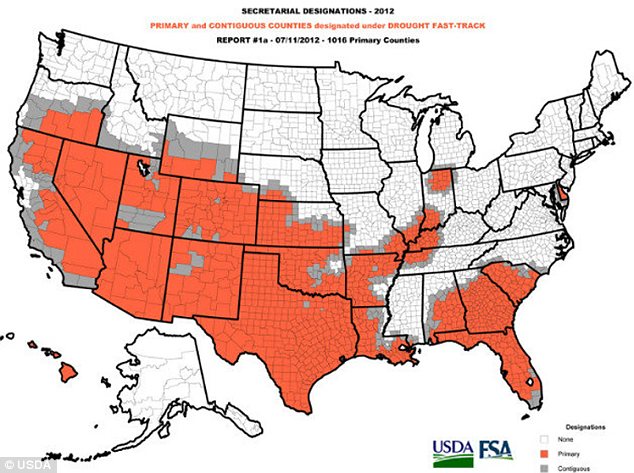 The United States Department of Agriculture declared natural disasters for 26 states and more than 1,000 counties because of the extreme drought that has destroyed crops in farms throughout the nation.

The USDA’s designation provides federal financial help for farmers during the troubling time.

The declaration come as the worst drought in a quarter century tightened its grip on Midwestern states over the past week.

Sweltering temperatures and scant rainfall punished corn and soybean crops across the region, a report from climate experts said on Thursday. Nearly two-thirds of the nine-state Midwest region was in some stage of drought in the week ended July 10, up from just over 50 per cent a week earlier, according to the Drought Monitor, a weekly report on drought throughout the country compiled by U.S. climate experts.

The most anomalous conditions covered the lower Ohio Valley, southern Great Lakes, and middle Mississippi Valley, where daily highs averaged 10 to 13 degrees above normal. Additionally, these areas received scant rainfall if any,' said Rich Tinker of the Climate Prediction Center.

'The worst conditions (D3 to D4) were assessed along and near the lower Ohio River and in northeastern Indiana, where rainfall was 7 to 11 inches below normal for the last 3 months,' he said, referring to the top two categories of drought, extreme and exceptional.

The deepening drought has dragged the yield potential of the developing soybean crop and the pollinating corn crop, which is in a growth stage when its water needs are highest.

On Wednesday, the U.S. Department of Agriculture slashed production forecasts for both crops due to the drought, joining scores of private forecasts that have sent grain prices to near-record highs.

The whole of Iowa was classified as abnormally dry as of July 10 and 12.7 per cent of the top corn and soybean producing state was in severe drought, up from 0.8 percent the prior week.

Harder-hit Illinois, the No. 2 corn and soy state, was 66.28 per cent under severe drought or worse, up from 40 per cent the previous week.

Severe to exceptional drought covered 80.15 per cent of Indiana, versus 68.84 per cent the prior week.

Conditions in Missouri also deteriorated, with 82.54 per cent of the state in severe drought or worse, compared with 78.83 percent the week before.

Rain was expected to move across the Midwest over the next 10 days, including parched southeastern areas, but coverage may be spotty, forecasters said on Thursday. 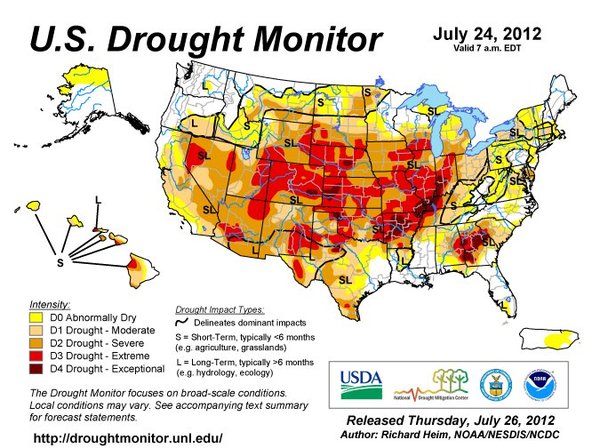 The weekly Drought Monitor shows "widespread intensification" in the central U.S., the National Drought Mitigation Center said in a statement.

Across the contiguous U.S., the total area under all kinds of drought grew only slightly but the most severe categories -- extreme and exceptional -- rose from 13.5 percent to 20.5 percent -- the highest level since 2003.

The jump "this week was the largest since we started the U.S. Drought Monitor" 12 years ago, Brian Fuchs, a climatologist and Drought Monitor author, told NBC News. "This is really showing the rapid intensification of the drought due to the heat/dryness over the region with little relief for anyone."

"We’ve seen tremendous intensification of drought through Illinois, Iowa, Missouri, Indiana, Arkansas, Kansas and Nebraska, and into part of Wyoming and South Dakota in the last week," Fuchs said in the center's statement.

Every state had at least a small area categorized as "abnormally dry" or worse. "It’s such a broad footprint," Fuchs said.

The Weather Channel noted the jump is the equivalent of adding 219,000 square miles to the worst drought categories -- "an area slightly larger than the states of California and New York combined," it  noted.

States posting dramatic increases in just the last week included Illinois, which went from 8 percent in extreme/exceptional drought to 70 percent, and Nebraska, which went from 5 percent to 64 percent.

In Illinois, the drought is impacting water supplies in towns like Pontiac. "The Vermillion River does not have enough flow for us to use it as our primary source of water," one field observer reported Wednesday to the Drought Mitigation Center. "We have had to switch to a secondary source of water, located in a reservoir a few miles outside of town ...  A 'dirt' like smell and taste is being noted ... We NEED rain, very soon."

FOOD PRICES TO RISE MEDIA SAYS TO STOCK UP NOW

(Reuters) - The drought in the Midwest is getting worse for hard-hit farmers and the wilting crops will mean higher food prices, the top U.S. agriculture official told President Barack Obama at the White House on Wednesday.

While USDA Secretary Tom Vilsack said he was praying everyday for rain, he told Obama the drought is not as bad as in the last great drought of 1988.

"I get on my knees everyday and I'm saying an extra prayer right now," Vilsack said. "If I had a rain prayer or a rain dance I could do, I would do it."

In his briefing to President Obama, Vilsack said that the drought of historic proportions will shrink this year's harvest of corn and soybeans. The crops are used for food and feed and because of that Vilsack said meat and poultry prices will be higher this year and next.

Vilsack reiterated he did not see a need right now for a government waiver to reduce production of corn-based ethanol, which critics say is helping to further drive up sky rocketing prices.

But he said the drought footprint was widening with an additional 39 counties designated as primary natural disaster areas for a total of 1,297 counties across 29 states.

The government said this week that the area affected by drought was the largest since 1956, but the 1988 drought is the costliest to date, which devastated farmers and sparked widespread forest fires.

Vilsack said the drought was not yet as severe as the 1988 weather disaster in the Midwest which caused billions of dollars of damage.

"Part of the problem we're facing is that weather conditions were so good at the beginning of the season that farmers got in the field early, and as a result this drought comes at a very difficult and painful time in their ability to have their crops have good yield," he said.

Vilsack urged Congress to work with the Obama Administration to improve aid to farmers who are struggling with a crop that was now affecting 61 percent of the U.S. land mass.

There was, however, little relief in sight from the stingy skies across the region. The western Midwest was expected to remain hot and dry for the next week, though there could be cooler temperatures and light rain in the east, an agricultural meteorologist said Wednesday.

"It's a little wetter for next week in the west and southwest," according to Don Keeney, a meteorologist for MDA EarthSat Weather, who said they were expecting only a half inch or less of rain. "So not much relief and confidence is low in that forecast."

The parched lands and predictions of food inflation will be another source of woe for Obama as he battles for reelection in November with an economy already suffering from anemic growth and weak job creation.

While higher feed costs would likely boost meat and poultry prices later this year and next, those prices could drop in the short term as producers slaughter cattle because of high costs, temporarily raising the meat supply, Vilsack said.

He said the USDA would open up more areas in the Conservation Reserve Program to give ranchers access to emergency grazing land.

Corn prices jumped again on Wednesday due to the deteriorating conditions, rising to nearly $8 a bushel to extend a rally that has seen the grain's price jump 50 percent over the past few months.

Hard-hit livestock producers and other groups want the Environmental Protection Agency to give oil refiners a waiver from the mandate to blend ethanol into gasoline, arguing demand for the corn-based fuel was driving up corn prices.

But Vilsack said ethanol demand was not a problem right now.

"There is no need to go to the EPA at this time based on the quantity of ethanol that is in storage," he told a White House briefing.

The U.S. drought is also expected to be felt worldwide as the world's biggest grain exporter struggles to get the crops off the field and to market.

"The dramatic rise in grain prices in the past few weeks is shaping up to be a serious financial blow for wheat importing countries," a German trader said. "African and Middle Eastern countries are now facing painful rises in import bills."