As before in Kiev and Florida, the vibrating ground makes for some impressive trumpet sounds, this time in Terrace, British Columbia where you can see its location at the confluence of several large rivers means it is at a weak point in the Earth's crust. 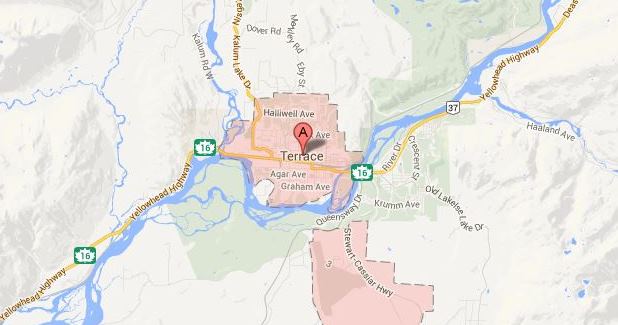 Previous Zetatalk on the Kiev trumpets:

These trumpets clearly involved air movement as the tones were so distinct. The trumpet sound was multi-tonal, almost harmonic at times with more than one tone heard at once. Trumpets, musical instruments, attain their tones by a focused vibration, a higher pitch where the vibrating material is a small surface, a deeper or baso pitch where the vibrating material is a large surface. Thus, the trumpets of Kiev were a vibration on a particular surface that did not change between August 3 and August 8, 2011, the two dates that the trumpet sound was recorded. Man-made structures have at times hummed in the wind, as anyone living near a wire in high winds can attest. But whatever was causing the trumpets of Kiev was more than wind, as the windows in buildings "shivered", per reports. The ground was also moving.

Kiev lies just south of a dam on the Kiev Reservoir, a damming of the Dnieper River. A vibration of the dam itself, like the strings of a violin, would resonate in the water, thus not only creating a vibration in the ground but a vibration in the air. There are musical instruments that use a water filled container to increase the vibration, so the vibration affects the air and sends a tone forth. Glasses of water filled to different heights, when tapped, create a vibrating tone due to the water surface affecting the air. The glass alone, when tapped, is barely audible. Where trumpets will be heard, worldwide, prior to the pole shift, the Kiev trumpets are not due to upper atmosphere clapping caused by lightning. They are caused by the stretch zone above the Black Sea, which will be pulling apart continuously until the hour of the pole shift. Thus, the people of Kiev should become accustomed to the music their dam is producing, as it is likely to be with them for the duration.

and the Florida howl:

The sounds produced by vibrating parts varies, depending upon the instrument. For the violin or guitar, where the string vibrates, the tone is sharp and distinct. If the string is short the tone is high pitched, a rapid vibration. For woodwinds and brass instruments, there is a pocket of air involved as well as a vibrating part, so the sound is more mellow. As with drums, where the large drum has the deepest tone, a vibrating surface that has a large area vibrates at a slower rate, and thus a more basso tone. Drums utilize air spaces to create their tone, as else it would merely be a slap against leather, not a booming sound. Sounds that reach a human ear invariably involve a vibrating air space, but the initial vibration was elsewhere.

As we explained for the Kiev trumpets, when an enclosed body of water rests on vibrating ground, music can be produced. But the variety of sounds that vibrating ground can produce in a stretch zone is not always musical. The fact that the ground is vibrating is reported by witnesses, who state they can feel the vibration in the ground. Yet the official explanation, at a loss to explain the current Earth changes, involves the atmosphere. Somehow, it is the wind. In Kiev the reservoir dam amplified the vibrations, so the reservoir was singing. But where a broad expanse of ground is vibrating, such as the Florida recordings indicate, so many tones are produced that the result is a howl.

Imagine a choir, which normally sings in harmony, each singing a particular note. Imagine the choir members each just making a noise, not a harmonious note, so that a hundred voices are merging into what would seem to be a howl. This is Florida. The entire state is a stretch zone, being pulled down and toward the center of the Atlantic by the spreading Atlantic, but likewise being pulled side to side by plate movement in the Caribbean Plate as the S American roll progresses. This creates vibration, as the rock resists being pulled apart or bent - first a tug, then a bounce back. During the ball game, when the Florida howl could be heard as background noise during the broadcast, the bowl of the stadium was acting like the enclosed air in a drum, amplifying the sound coming from the bay area itself.

Whether the sound is a tone, a rumble, a howl, or a hum the etiology is all the same - the ground is vibrating. A tornado is reported to have a freight train sound, produced by the vibrations of the air itself as air masses slam into each other, rapidly. But here officials can point to the tornado! High winds near wires under tension will also produce a singing sound, but this is very local, not dominating a wide area, and the vibrating wires can be located, the cause identified. This is not the case during stretch zone hums or howls. Experts may recognize that it is the ground that is vibrating, setting in motion music or an undifferentiated noise that sounds like a howl, but are at a loss to explain why the ground would be vibrating! Once again the cover-up over the presence of Planet X runs headlong into the Earth changes, and loses. Those seeking an answer access the Internet and discover our words on the ZetaTalk site.

Just picked this up from Bonnie Scotland -

Here is a corresponding news report from Global for the strange sounds in Terrace BC:

Funny thing is that the establishment really thinks that the excuse of a 'Road Grader' which is absolutely ridiculous. As the report actually contains links to other sounds being observed all over the world.