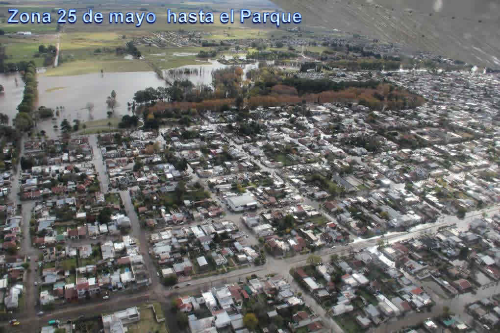 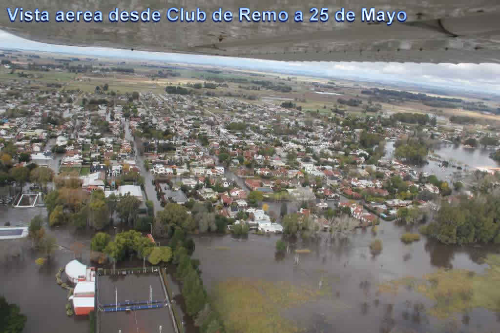 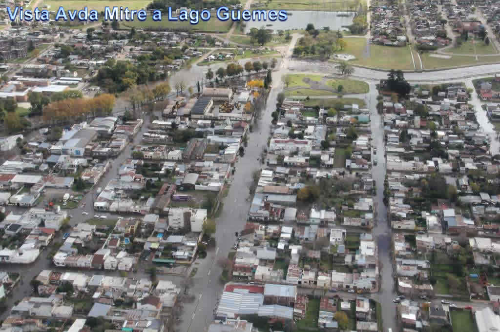 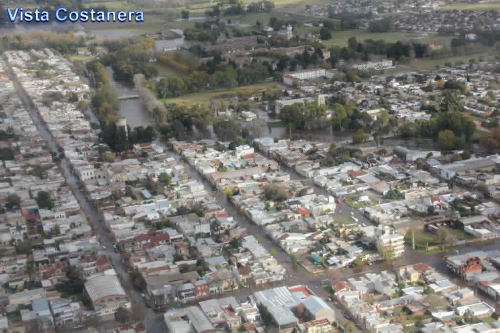 According Alzueta, the party of Bolivar has 500,000 hectares, and of that figure at least 60 to 70% is under water. In Pehuajó, about 80 kilometers, the situation is also critical. "The party has 450,000 hectares and there are some 300,000 underwater. More than 75 percent is under water and roads are impassable," /

/ It was the second most serious flooding "in intensity and volume in the history of this city," said the mayor (mayor), José Inza. / 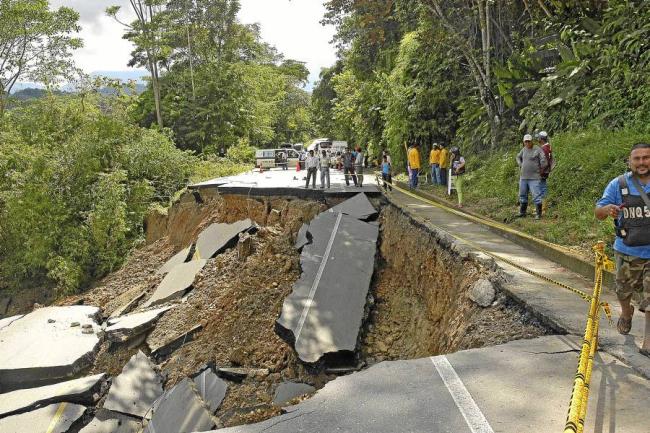 After drought, flood: There are 700,000 ha under water in Buenos Aires

After the drought, flooding. Some 700,000 hectares of bonaerenses Bolivar, Carlos Casares and Pehuajó, which until less than four months suffered from lack of rain, are now under water or are flooded by rainfall. In those regions of the northwest province, so far in 2012 it rained and what is usually recorded in a year. In Bolivar, for example, only 350 mm fell in May and have accumulated between 800 and 1000 mm. The results are obvious: losses in soybean and corn harvest, difficulties to get milk from the dairy, beef cattle exodus and impassable roads to get around.
"Today we are like at the time of 1987/1989, when it flooded everything. So far in 2012 and it rained a whole year and we have fields with 80 to 90 percent of impact," said Fernando Alzueta, president of the Rural Society of Bolivar. "We went from a drought that lasted until Jan. 15 to a flood," the ruralist. According Alzueta, the party of Bolivar has 500,000 hectares, and of that figure at least 60 to 70% is under water. In this district need to collect 30% of the soybean crop, which equates to about 50,000 hectares. Moreover, not even able to start lifting corn. To make matters worse, grasslands for livestock are flooded.
"There will be an important transfer of property, while there are complications to get milk from the farms and bring supplies. Usually we fall in May 40 millimeters, but this time were 350," the president of the local Rural. Bolivar has a beef herd is now about 500,000 heads.
In the midst of this tragedy, Alzueta laments that the provincial government proposes to increase the tax burden on a revaluation of land and a consequent rise in other taxes. "Here there will be unproductive fields until at least next summer, and come up with the rural tax hike. It's unfair what they want to do," he said. Alzueta producers said they will ask for the declaration of emergency or disaster due to flooding.
In Pehuajó, about 80 kilometers, the situation is also critical. "The party has 450,000 hectares and there are some 300,000 underwater. More than 75 percent is under water and roads are impassable," said Miguel Folgado, president of the Rural Society of Pehuajó. "There are places with more than 300 millimeters in recent weeks and have more than 1000 millimeters a year. In any one year here usually 900 mm usually fall," he added.
In this area already collected 50% of soybeans. But they have doubts about the rest. "We do not know if it is set to reap as many crops are under water," he said.
Like Bolivar, Pehuajó are also surprised by the sudden change of climate. "In December and January were asking the drought emergency and now we do by the flood," he said Folgado. "We can not harvest, we are overwhelmed," he said. The local municipality is trying to repair the roads. However, for Folgado "is impossible in this situation."
In Carlos Casares, about 60 kilometers from Pehuajó, there is despair by a similar picture. "The situation is very complicated. Carlos Casares has about 240,000 hectares and over 100,000 are under water. More than 45 percent are affected, but in some places is even greater," he said Alejandro Diaz, president of the Rural Society of the party . Diaz said that "the harvest is very difficult." In this sense, sums that are able to collect nearly 80 percent of the soybeans first, which was planted in October and November last year, but the second, planted after wheat, is now with water in a lot. According to the leader country, the southern part of the party is the one that appears most affected by the flood.

A livestock producers this is causing them severe disorders. "The cows are being run in a few places higher mounds, that are left," he said. Meanwhile, dairy farmers suffer the loss of pastures new for those who had invested heavily to improve the quality of feeding their dairy herds.
If you add the acres affected in Bolivar, Pehuajó and Carlos Casares, the area affected and about 700,000 hectares.
According to the specialist agroclimatology Eduardo Sierra, what is happening still does not respond to the phenomenon "El Niño", which often triggers rainfall above normal. The situation may be explained, in a release of stored energy in the middle of "La Niña" phenomenon, by contrast, leads to low rainfall.
"The cause of this is" El Nino "but that is releasing the large accumulation of atmospheric energy that caused" The Girl Double "(two years)" 2010/2012. Because this phenomenon works putting a "cap" to the atmosphere, which prevents the rains, which usually happens when it ends suddenly releases the stored energy and intense phenomena occur, "said the expert. For Sierra," The Child "just going to cause effect from September onwards. (The Nation)

The region, which until recent months suffered a severe drought, was affected by the rains that in some cases over a few days the annual average.

The parties most affected are those of Bolivar, Carlos Casares and Pehuajó, between 300 and 500 kilometers southwest of Buenos Aires. Because of the floods were recorded crop losses of soybeans and corn, and pastures to fatten cattle. Also altered the production of milk and had to move the animals to higher ground or without water.

"Today we are like at the time of 1987/1989, when it flooded everything. So far in 2012 and it rained a whole year and we have fields with 80 to 90 percent of impact, "said Fernando Alzueta, president of the Rural Society of Bolivar, in remarks published today by the newspaper" La Nacion " . "We went from a drought that lasted until Jan. 15 to a flood," he said.

"We are releasing the large accumulation of atmospheric energy that caused 'La Niña Double' (two years) 2010/2012. Because this phenomenon works putting a "cap" to the atmosphere, which prevents the rains, which usually happens when it ends suddenly releases the stored energy and intense phenomena occur, "he said.

The heavy rains that affected the Buenos Aires region this weekend caused severe flooding in the city of Azul, 300 km southwest of Buenos Aires, where the overflow of a stream that runs through some 2,000 people forced to evacuate their homes.

It was the second most serious flooding "in intensity and volume in the history of this city," said the mayor (mayor), José Inza. The waters came down today and only 18 people remained evacuated.

Both President Ma Ying-jeou and Premier Sean Chen yesterday instructed all-out efforts to carry out disaster relief operations after many areas in southern Taiwan were ravaged by floods that have taken at least one life in Tainan.

Ma gave his instruction at a press conference around noon after his second-term inauguration ceremony.

After he and other Cabinet officials were sworn in, Premier Chen told agencies at the central and local levels to work together and help people affected by floods caused by torrential rains in southern parts of the island.

Rising waters that were waist high in some Tainan districts stranded at least 80 people.

The body of one woman in her mid-70s was recovered in Rende after she was washed away while feeding chickens.

In the same district, another woman — aged 48 — remained missing. Her scooter was found near an irrigation and drainage river.

In adjacent Kaohsiung, several residents were evacuated while landslides cut off bridges and transport links to at least four aboriginal communities in Tianliao and Fuxing districts.

Highway staff worked around the clock to repair the damaged roads and bridges.

Elsewhere, falling rocks at the 83-km and 85-km mark of Provincial Highway No. 20 in northern Taoyuan forced traffic suspension there.

The flooding also caused the roadbed at the 98-km mark to sink.

Officials in southern Pingtung, central Nantou, Taipei in the north and Hualien on the eastern coast have stepped up alert on possible threats from floods in their areas.

Officials at the Central Weather Bureau said residents should remain alert against heavy rains and floods yet.

They forecast that a stationary weather system will continue affecting central and southern parts of Taiwan until at least tomorrow.