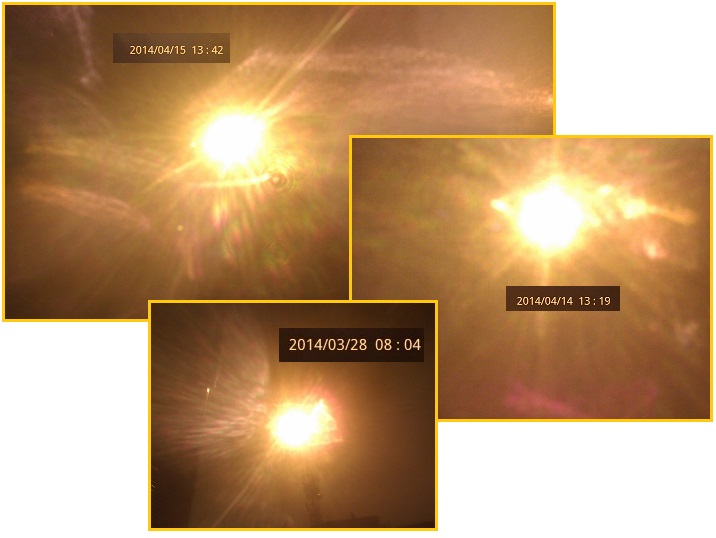 Today monsters presence, and abnormal light and brightness at bottom, explain to me if possible . Ciao Alberto 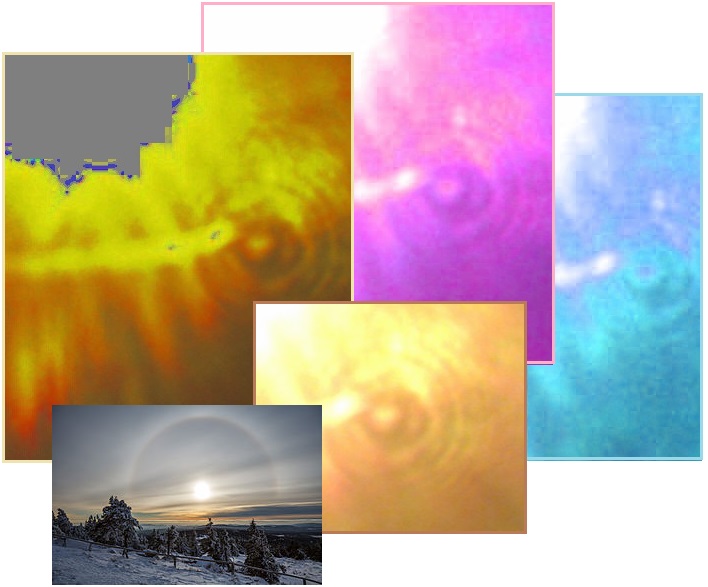 SOZT
Alberto has noted a change in his photos. The light reflected from the vast tail of Planet X is now more evident below the Sun, where formerly the tail wafted in a clockwise manner from below the Sun to the left, thence above. The Moon Swirls were found to the left and above the Sun, as recently as two weeks ago. In addition, there seems to be a distinct orb at the 4 o’clock position on an April 15 photo, which is itself reflecting sunlight as though it were partway between the Sun and the Earth. Is this Planet X itself? It is indeed, distinct from the brilliant Moon Swirls in that it holds dust closely shrouded around itself and does not act like a flashlight funneling light down a tube.

Mankind is familiar with the halos around light caused by ice crystals in the atmosphere. When the angle from the light to the camera or viewers eye is right, a diffraction of the light rays can form a circle. Of course, the light rays are diffracted in all directions, and the viewer is only capturing those light rays that converge on his eye.  During Alberto’s photo, when the heavily shrouded body of Planet X was clearly defined, why did his camera capture concentric circles around this corpus? Unlike the Moon Swirls, which can focus light down a tube as though coming from the end of a flashlight, the Planet X halos are caused by an EVEN distribution of light from the corpus itself. The shroud of dust clings closely, but rapidly becomes less thick at a distance from the corpus. At various points where the COMPOSITION of this shroud changes, a ring is formed that will reflect and diffract light outbound from the corpus of Planet X.

Planet X and the Earth have moved into an 8 of 10 position, whereby Planet X appears more to the right as Earth has pulled as far as possible to the left. In addition, Planet X has moved closer to the Earth, so that when the vast tail is hosed out from the N Pole of Planet X, it splays directly at the Earth. The former curl of the tail round and then above the Sun, visible from Earth, is now more likely to be lost from sight as the Earth is increasingly WITHIN the tail. This of course will bring more electro-magnetic interference with mankind’s electronics and satellites, and also more visibility as Second Sun sightings will increase in frequency.
EOZT