Pre-Announcement Media Coverage
The World in 2017 predictions according to the #Economist
Magazine showing Illuminati Cards to be played.

The World in 2017 contains The Economist’s annual collection of detailed, numerate and opinionated predictions for the year ahead. The World in 2017 features leading figures from politics, business, finance, science, technology and the arts alongside prominent journalists from The Economist and other leading news publications. Evidence from the carvings, made on a pillar known as the Vulture Stone, suggests that a swarm of comet fragments hit the Earth in around 11000 BC

Using a computer programme to show where the constellations would have appeared above Turkey thousands of years ago, they were able to pinpoint the comet strike to 10,950BC, the exact time the Younger Dryas begins according to ice core data from Greenland

Other evidence for the impact from a Greenland ice core suggests roughly the same time frame.

The Younger Dryas is viewed as a crucial period for humanity, as it roughly coincides with the emergence of agriculture and the first Neolithic civilisations.

Before the strike, vast areas of wild wheat and barley had allowed nomadic hunters in the Middle East to establish permanent base camps. But the difficult climate conditions following the impact forced communities to come together and work out new ways of maintaining the crops, through watering and selective breeding. Thus farming began, allowing the rise of the first towns.

The WeatherChannel.Com had the "Two Sun" phenomenon trending on its homepage on April 12, 2017

Amit21 says:
Whilst going on a walk I was amazed to see two sunsets on opposite sides of the sky. One up ahead was the genuine sunset based on the direction, whilst the other was somehow perfectly opposite it on the horizon. 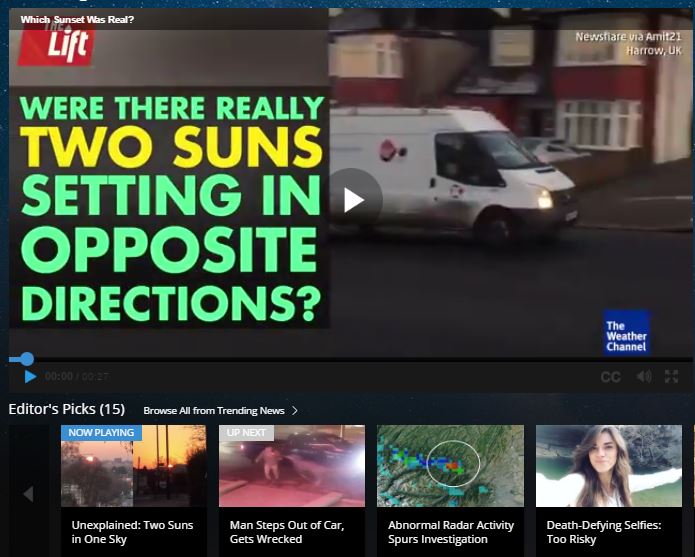 Which Sunset Was Real?

ANU is launching a search for a new planet in our Solar System, inviting anyone around the world with access to the Internet to help make the historic discovery.

ANU astrophysicist Dr Brad Tucker is leading the project, which is being launched by Professor Brian Cox during a BBC Stargazing Live broadcast from the ANU Siding Spring Observatory.

"We have the potential to find a new planet in our Solar System that no human has ever seen in our two-million-year history," said Dr Tucker from the ANU Research School of Astronomy and Astrophysics.

Dr Tucker said astronomers had long discussed the likelihood of a ninth planet on the outer edges of the Solar System, but nothing had been found yet.

"Planet 9 is predicted to be a super Earth, about 10 times the mass and up to four times the size of our planet. It's going to be cold and far away, and about 800 times the distance between Earth and the sun. It's pretty mysterious," he said.

The ANU project will allow citizen scientists to use a website to search hundreds of thousands of images taken by the ANU SkyMapper telescope at Siding Spring.

SkyMapper will take 36 images of each part of the southern sky, which is relatively unexplored, and identify changes occurring within the Universe.

"It's actually not that complicated to find Planet 9. It really is spot the difference. Then you just click on the image, mark what is different and we'll take care of the rest," Dr Tucker said.

He said he expected people to also find and identify other mystery objects in space, including asteroids, comets and dwarf planets like Pluto.

Dr Tucker said modern computers could not match the passion of millions of people.

"It will be through all our dedication that we can find Planet 9 and other things that move in space," he said.

Co-researcher and Head of SkyMapper Dr Chris Wolf said SkyMapper was the only telescope in the world that maps the whole southern sky.

"Whatever is hiding there that you can't see from the north, we will find it," Dr Wolf said.

From 28 to 30 March at 8pm London time, BBC Stargazing Live hosted by Professor Cox and comedian Dara O Briain is expected to be viewed by around five million people.

The ABC will broadcast an Australian Stargazing Live program from Siding Spring from 4 to 6 April, hosted by Professor Cox and Julia Zemiro.

SkyMapper is a 1.3-metre telescope that is creating a full record of the southern sky for Australian astronomers.

People will be able to participate in the ANU citizen science project to search for Planet 9 at www.zooniverse.org

At first blush this offer seems to be asking amateurs to help them locate Nibiru, as we have in ZetaTalk mentioned the possibility that the actual official announcement route might be by elevating amateur discoveries to review and discussion by Prong 3 astronomers. But this maneuver by NASA has the opposite intent. Owned or bribed by the wealthy elite who still want the cover-up to continue, those at the helm in NASA are intent on discrediting the Prong 3 efforts and confusing the general public.

Nibiru will be discovered, as we have stated, within the Dark Energy Survey images which have imaged the inner Solar System from the Chili observatory since 2013 and include recent infra-red images from the SouthEast to the NorthEast along the Ecliptic. This scan is within the Earth’s orbit, where the Nibiru complex has resided since 2004. The WISE images, on the other hand, all point outward from the Earth into the night sky, never imaging the region, thus, within the Earth’s orbit. This maneuver by NASA is intended to create clutter, to drown out the Dark Energy Survey discoveries.

Interestingly the NASA discovery uses the word "Announcement" in their discovery of the 7 Earth-size planets.  There is also a Google Doodle about the issue with links on the topic: On the NASA live-feed they are broadcasting this with lots of interviews:  https://youtu.be/UdmHHpAsMVw 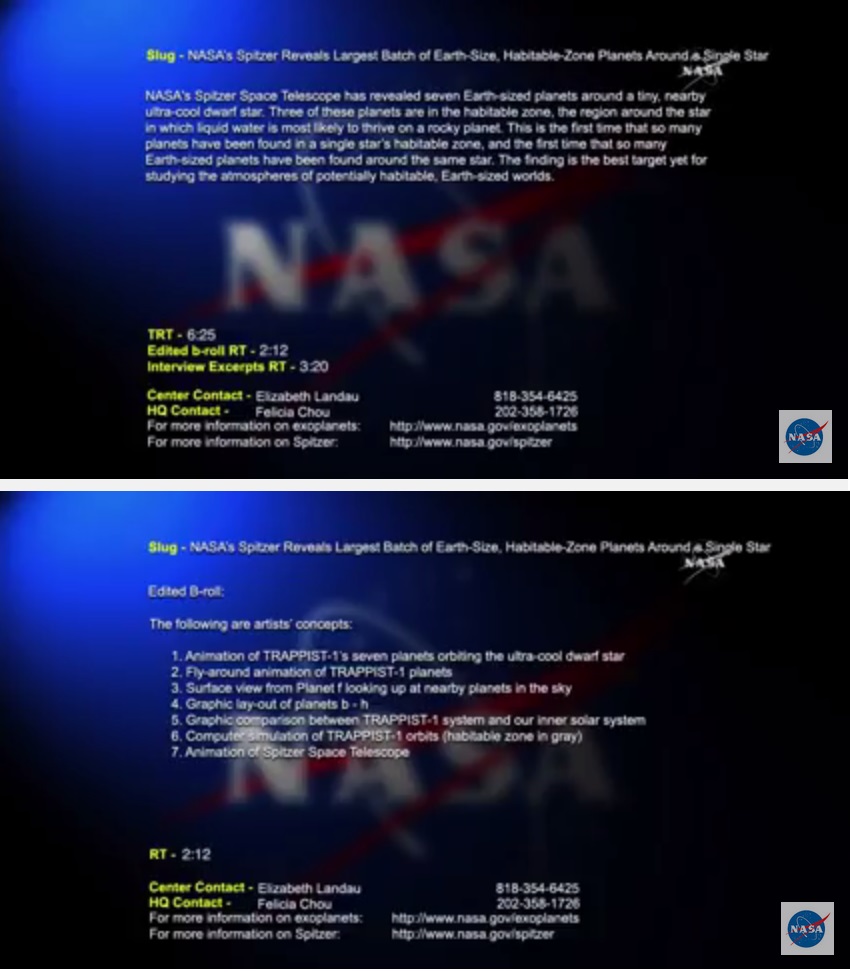 Which brings up the idea that if the two look a little closer.....

Even more Prong 3 mischief from NASA? The "discoveries" are coming thick and fast!

Astronomers have never seen anything like this before: Seven Earth-size alien worlds orbit the same tiny, dim star, and all of them may be capable of supporting life as we know it, a new study reports.

"Looking for life elsewhere, this system is probably our best bet as of today," study co-author Brice-Olivier Demory, a professor at the Center for Space and Habitability at the University of Bern in Switzerland, said in a statement.

The exoplanets circle the star TRAPPIST-1, which lies just 39 light-years from Earth — a mere stone's throw in the cosmic scheme of things. So speculation about the alien worlds' life-hosting potential should soon be informed by hard data, study team members said..... Looks like more Prong 3 mischief planned by NASA as the Zetas explained in last Saturday's New Zetatalk:  this time they are going to reclassify every piece of rock in the solar system as a planet to cloud the issue when PX is announced.

Our solar system could be about to get 100 new planets 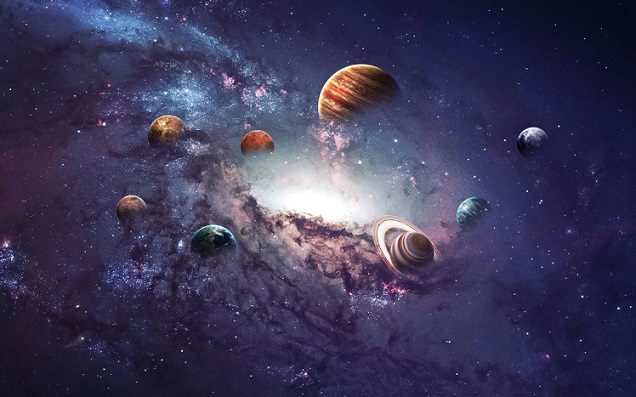 Our solar system could be about to get 100 new planets, under a new proposal by a top NASA scientist.

But don’t worry – there’s not a whole bunch of new worlds flying towards our solar system, preparing to dock next to the sun.

Instead, the whole way we classify planets is wrong – and we should actually consider our moon as a planet, says Alan Stern, principle investigator of Nasa’s New Horizons mission to Pluto.

Stern and five colleagues have written a suggestion of a new way to classify planets – which would no longer require planets to orbit the sun.

If accepted by the International Astronomical Union (IAU), the move would mean that our solar system would acquire 100 new planets – including Saturn’s moon Titan and Jupiter’s moons Europa and Ganymede.

The purpose of these enigmatic sites is still not understood. As very few artifacts were recovered during excavation, they are unlikely to have been villages. The layout also does not suggest that they had been built for defensive purposes. The current thinking among archaeologists is that they were used only infrequently, perhaps as ritual gathering places.

The structures are abandoned enclosures that occupy approximately 13,000 square kilometers. The common belief that the rainforest ecosystem has been untouched by humans is challenged by this discovery. 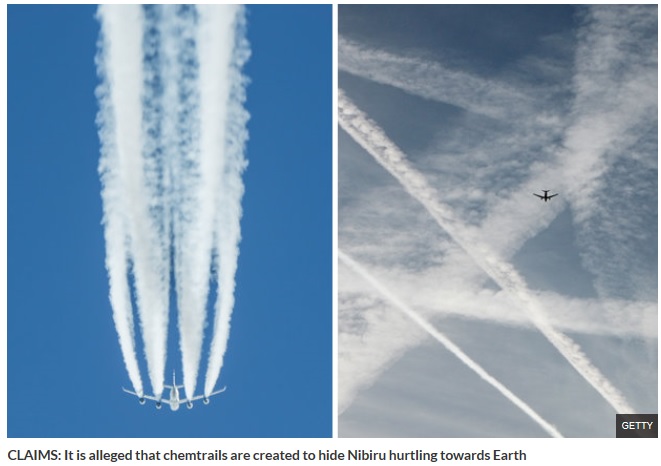 A Top Secret mission is under way to hide a giant alien planet that is going to obliterate Earth.

Operation Indigo Skyfold involves the use of military aircraft to create “chemtrails” in the sky which block out the visibility of approaching Planet X.

Chemtrails is a name derived from condensation trails (contrails) – the white lines of condensation left behind by high-flying aircraft.

However, many people believe they are not created by water vapour but are actually a result of the planes spraying toxic chemicals and biological agents into the air.

The apparent sharp rise in the number of these over the world has been discussed on internet forums for years now.