Incredible footage captured by a driver traveling on the Van- Hakkari highway in Turkey's southeast shows the moment a landslide gathered steam off the side of a mountain, sending up a large storm of dust in the process. 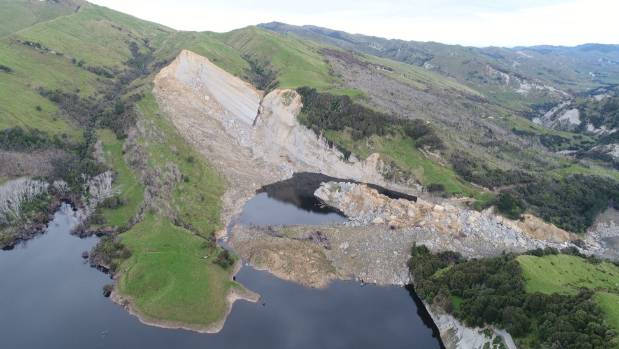 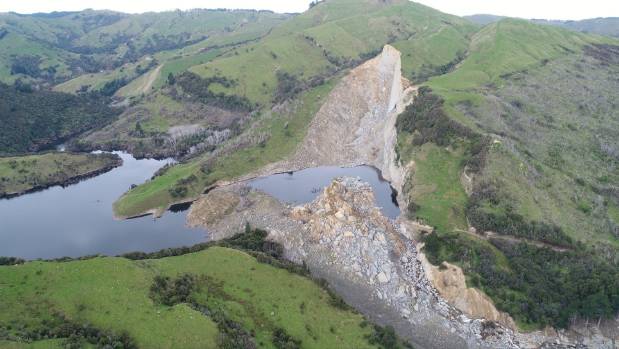 The slip, believed to have occurred overnight on February 24/25, saw nearly 3,000 cubic metres of rocks and earth move down the hill, and is what scientists have called a significant national event - as big as the biggest to come down in the Kaikoura quake, and has created the country's newest lake.

"We knew it was significant in a national sense the moment we saw it," Cave said.

He said about 11.5 million tonnes of material was displaced in the event, the cause of which is still unknown.

Nepal: 3 die in landslide in Gorkha. Three people, including an eight-month-old infant, were killed after a landslide buried a house in Andheri of Sahid Lakhan Rural Municipality-6 in Gorkha district on Wednesday morning.

Landslides buried the house of Nawaraj Kunwar, killing his niece Saru Kunwar, 20, Prabina Kunwar, 11, and eight-month-old Yunik Kunwar. The incident took place when the family and relatives had gathered to celebrate Shrawan Sankranti.

The landslide had occurred at around 5 am.

Over 15 houses in Andheri and 30 houses in the neighboring Tinghare are at risk, according to Ramesh Thapa, chief of the rural municipality. 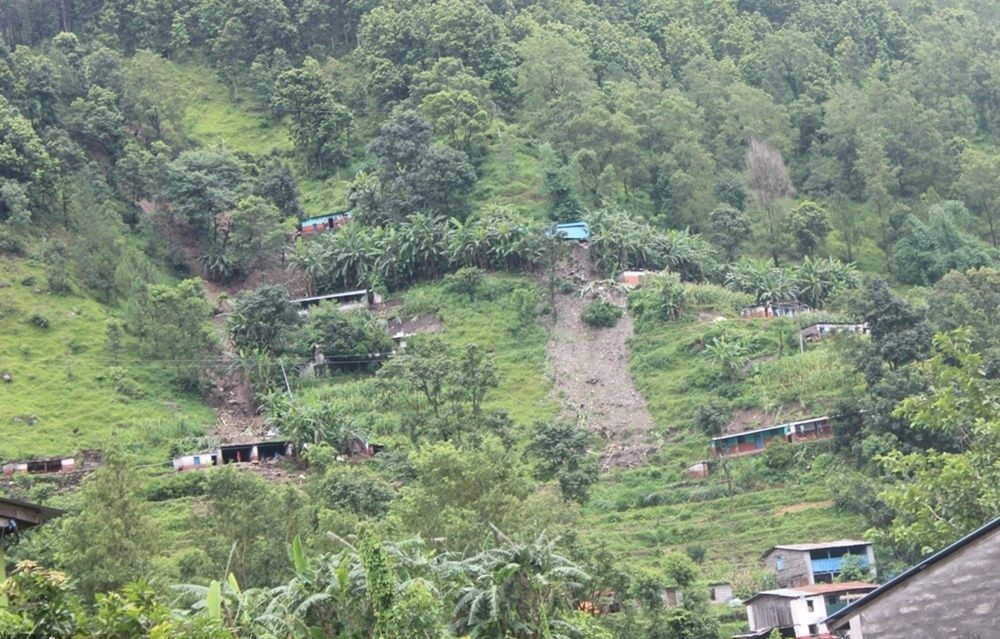 A teenager died when a landslide triggered by incessant rain swept away a house at Lasti Berneta of Jaljala rural municipality in Parbat district on Tuesday night.

According to the police, 16-year-old Bikas Pariyar, son of Bam Bahadur Pariyar, has gone missing after their stone and mud house was swept away by the landslide at 1 am today. Pariyar’s body was recovered from the landslide debris at around 9am this morning.

Likewise, 25 houses in the settlement at Lasti Berneta have suffered damages and five others are missing in the landslide, informed Chief District Officer Gurudutta Dhakal.

Six people were injured when the house of Bhimlal Acharya collapsed due to landslide at Baskot, Dhairing of Jaljala rural municipality. The incident took place at night when the people were asleep. The injured have been taken to local hospital.

Meanwhile, the Maldhunga-Beni road has been obstructed due to landslide at Pang of Kushma municipality. Mexico: 23 houses collapse in Tijuana due to the collapse of a hill. 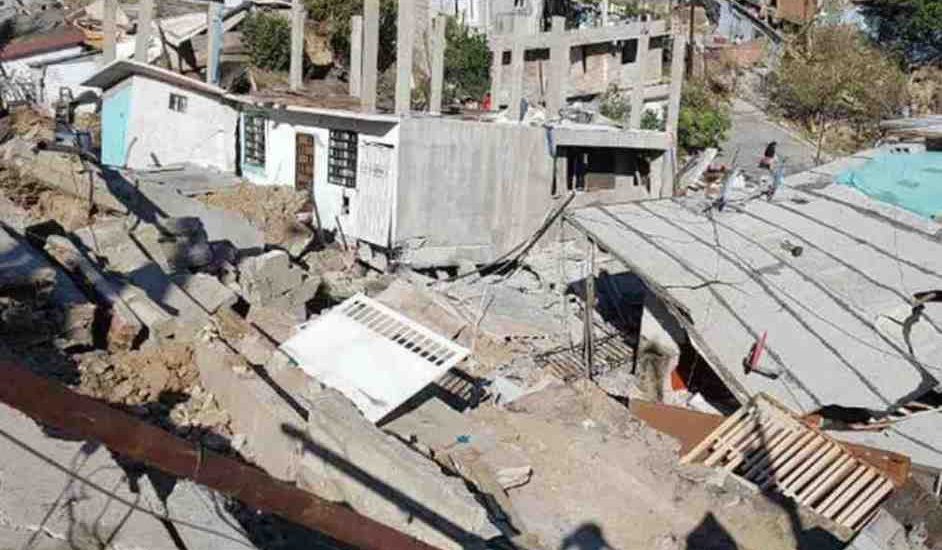 EL NUEVO DIARIO, TIJUANA (MEXICO) .- A total of 23 homes collapsed in the last hours on the side of a hill in the Mexican municipality of Tijuana due to several reported landslides, but no injuries have been reported so far.

According to the director of Civil Protection of this municipality of the northwestern state of Baja California, José Rito Portugal, the unstable conditions of the land can be the cause of the landslides.

"We see a slope of 20 meters, there are many factors that could detonate this, preliminarily and ocularly, what we are observing is something natural," he said, adding that they will wait for the results of the expert tests.

According to the official, the neighbors of the neighborhood (neighborhood) Reforma detected cracks in their houses for two weeks, but did not notify the authorities until Friday, July 13, when the fissures began to grow larger.

As a preventive action, inspectors from the Directorate of Civil Protection came and placed red labels on 11 homes that were in danger of collapsing, and warning their residents of the risk they were running if they decided to stay.

The next day, they placed warning signs in nine other houses and evicted their inhabitants.

During that day, the Municipal Government installed a Mobile Emergency Operations Center.

A few hours later there was the collapse of the first four houses, to which were added another 18 homes for the rest of the afternoon and Saturday night. Starting this Sunday, another house collapsed.

No person has been injured in these events, although some of the residents requested the police presence because they claim that acts of predation have begun.

One of the neighbors said that on Saturday night "strange people were around the remains of the property and I had the fear of being assaulted when I moved my belongings to a relative's house".

Given this, Rito Portugal said today that the Municipal Police is already in place, while the dependency in charge of the area of ​​the disaster.

Likewise, personnel of the Mexican Army went to the demarcation to apply the DN-III-E Plan, which consists in providing relief work to the settlers affected by the collapse.

Meanwhile, the crews of workers from the State Public Services Commission of Tijuana (CESPT) and the Federal Electricity Commission (CFE) arrived to reinstate the water and electricity service that were suspended.

On the other hand, authorities of the municipal delegation informed that a temporary shelter for 25 people is already installed, installed in a nearby community center, although for the moment there have been no applicants.

At least 15 dead in Myanmar mine landslide At least 17 people have been killed while dozens are feared trapped under debris after a landslide at a jade mine in Myanmar's northern Kachin state.

More than 100 people were in the mine at the time of the landslide, which occurred on Saturday, and dozens were missing before authorities called off the search because of bad weather.

According to a report from a hospital in the city of Hpakant, 17 people were confirmed dead, with many more injured.

Jade mine accidents are common in Myanmar, where the last major accident took place in January, in which six people were killed in a landslide at an abandoned mine in Kachin.

In a 2015 report, nonprofit Global Witness revealed that the jade miners work in dangerous conditions and are often exploited by warlords, drug traffickers and military officers.

Myanmar is the biggest producer of jadeite, a valuable variety of jade, which is mainly mined in mountains of Kachin. Jammu, July 15 (IANS) Five persons were killed and 25 injured in a landslide in Jammu and Kashmir's Reasi district on Sunday, officials said.

Police said a large number of people were bathing under a waterfall in Sehar Baba area in Reasi when a landslide occurred, burying the people beneath it.

"Rescue and relief operation is going on. The injured have been shifted to hospital for treatment," a police officer said.

Jul 15, 2018. Rapid action by personnel of the Directorate of Civil Protection of the Mayor's Office of Tijuana, prevented that the landslide in Literatos street of Colonia Reforma had more serious consequences, since this Saturday afternoon Homes whose inhabitants were evicted last Friday, began to collapse.

The director of Municipal Civil Protection, José Rito Portugal, reported that last Friday red labels were placed (high risk of collapse) in 11 homes, and this Saturday 12 more houses with red label were added, of which 9 are in the upper part of the slope and 13 in the lower part.

He pointed out that until 6:00 pm this Saturday, the collapse of four houses had been registered, and the rest were beginning to tilt. For the second time a large-scale landslide occurred. 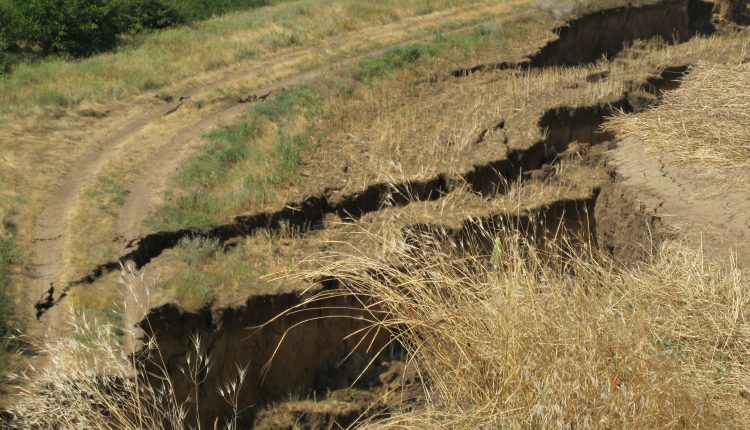 For a few days at the South there were two large-scale landslides. The second incident occurred just a kilometer from the city limits.

This was reported by the correspondent of the Ukrainian Information Service.

The width of the split was 10 meters, and the length was 100 meters. On the spot, experts and rescuers are working, who are investigating the cause and how close the landslide can get to the city.

It should be noted that landslides occur regularly between Sichavka and Yuzhny, but such large-scale ones are for the first time in decades. Employees of the State Emergency Situations Department protected the dangerous territory.

Recall, on July 7, 10 kilometers from the Southern, the first movement of the soil occurred. The width of the fault is 150 meters, and the crack itself was stretched out.