Recent landslides around the world.

Torrential rainfall burst riverbanks across the country and coastal communities have been warned of higher tides.

At least 34 people were killed and scores feared missing after a landslide triggered by monsoon rains struck a village in eastern Myanmar on Friday, AFP reported. “We found 34 dead, and the search for dead bodies is still ongoing,” said local administrator Myo Min Tun.

A deluge of mud descended on Thae Pyar Kone village in Mon state on Friday (Aug. 9) , and washed out 16 homes and a monastery. Search and rescue teams worked through the night to find survivors and recover bodies from the sludge.

Officials believe that more than 80 people could still be missing.

Torrential rainfall burst riverbanks across the country and coastal communities have been warned of higher tides. According to the United Nations Office for the Coordination of Humanitarian Affairs, around 89,000 people have been displaced by floods in recent weeks, although many have since been able to return home.

Residents waded out through waist-deep waters in eastern Bago region after the Sittaung river overflowed, and led to collapse of their homes. 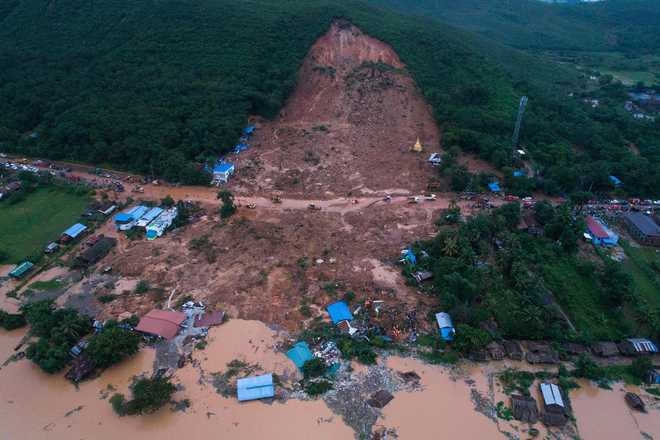 The circulation on National Route 40 was closed due to the great fall of a hill on the side of the road. One person managed to capture the amazing event on video. Villa La Angostura is going through one of the most critical moments in its history, since the lack of light and water now added isolation due to a landslide on km 2094 of Route 40, leaving the road to that locality impassable.

The impressive collapse of one of the hills next to the route was videotaped and viralized in moments. From this morning National Road works in place to remove the debris and enable the passage to the Seven Lakes Road, but they reported that the cut will be until further notice due to the magnitude of the event.

Mudslide threatens condos, forces some residents to evacuate in Harrison 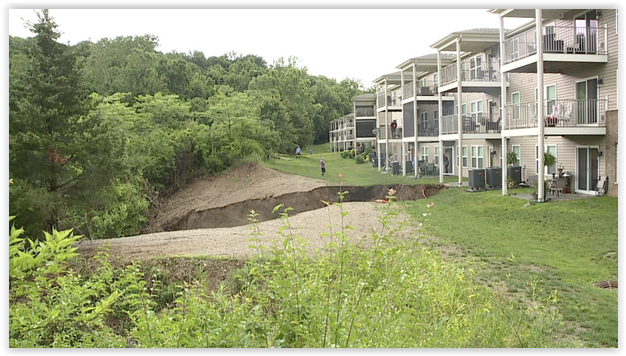 HARRISON, Ohio — A mudslide forced residents to evacuate from their hilltop condos after heavy rains this weekend continued to erode part of the hillside behind them.

About 30 residents of the Legacy by Fisher Homes neighborhood near Heritage Square were forced out after 2:30 a.m. Sunday after the Harrison Fire Department evacuated the condos nearest to the mudslide.

"The neighbors next to us, it's at their patio," said Deanna Frey, a resident who was evacuated early Sunday morning. "So any more rain, it might go.

"They allowed us to come back to get our belongings, and now there's a condemned sign on our door," said Frey.

On Monday, remaining residents were told power was going to be shut off at noon, but it was still on at 12:30 p.m.

The condos are on top of a hill, and emergency units on scene said the ground they were built on is eroding. To make matters worse, utility lines were exposed.

Emergency units said they will stay on scene in case there is further erosion. They also have to wait for an engineer to assess the damage to the exposed utility lines.

Neighbors said there have been issues with mudslides since December, but heavy, continuous rains Saturday night caused it to get much worse.

"We have and continue to offer our expertise and service to aid the Condominium Association in their analysis of the situation and long-term solution," Fischer Homes said, in a written statement Sunday evening. "We remain concerned for those homeowners who were evacuated as a result of the heavy storms and subsequent erosion. Fischer Homes has built more than 24,000 homes over the past 39 years with our customers' best interests always at the forefront. We remain in contact with the Condominium Association to help guide them through the ultimate resolution." 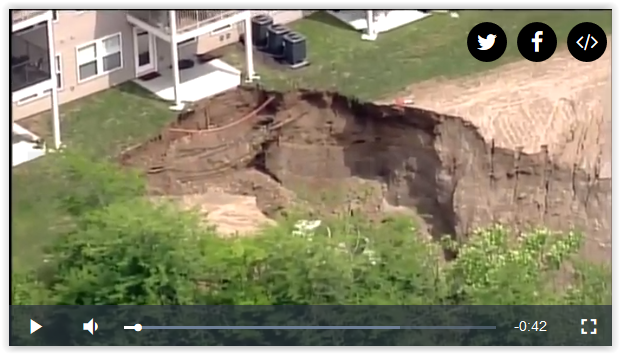 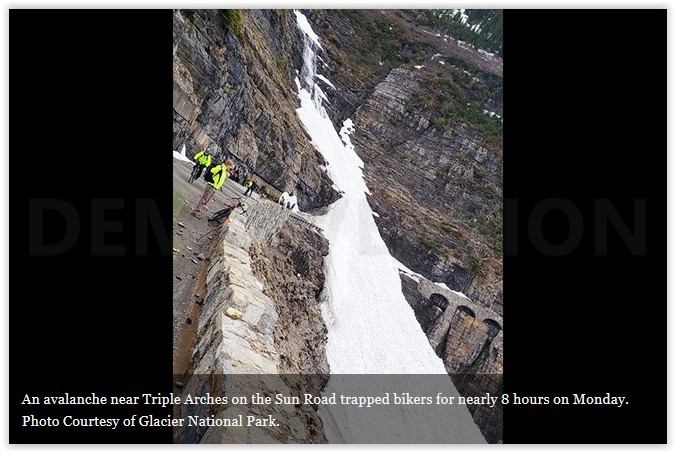 A rockslide and an avalanche near Triple Arches on the Going-to-the-Sun Road left 13 cyclists stranded for eight hours on Memorial Day.

Glacier National Park officials closed the Going-to-the-Sun Road above The Loop on May 27 after a separate rockslide came down on the road and prevented emergency vehicle travel. However, many cyclists were already above the rockslide when the closure was put into effect.

Later in the day, a large avalanche came down on the road at Triple Arches. The snow slide was caught on video by a number of visitors in the area.

No one was injured in either the rockslide or avalanche.

Two volunteer bike patrollers were in the area at the time of the slide and relayed a call for help to park dispatch and a team of more than a dozen park staff, including rangers and equipment operators, were mobilized. An avalanche forecaster with the U.S. Geological Survey was also called to the site.

After clearing the rockslide, and ensuring that the avalanche had stabilized, park staff began to clear a path through the avalanche to gain access to the stranded cyclists. The 13 cyclists were trapped on the other side of the slide for about eight hours. Park officials said they were cold, but otherwise in good spirits.

A number of visitors chose to cross the avalanche so that they could continue their ride to Logan Pass. Park officials said that behavior is strongly discouraged and could lead to significant injury. If you must cross an avalanche path as a last resort, use a spotter to watch for additional slide activity up the mountain and cross one at a time.

“If you see fresh snow on the side of the road or across the road, even if you are excited about your bike trip, turn around,” Chief Ranger Paul Austin said in a press release issued Tuesday. “Take responsibility for your safety and though disappointing, plan on heading out another day. Biking along the Going-to-the-Sun Road is not the same as an easy bike trip around town.”

Glacier reminds visitors that conditions change rapidly in the park. Always pack extra food, bring extra clothes, and learn about potential hazards that may exist in the area you plan to visit.

Late last week, plow crews on the west side of the Going-to-the-Sun Road reached the Continental Divide at Logan Pass. The east side crews are now working in the area of Siyeh Bend. Both crews will converge on the “Big Drift” in the coming days, a section of road just east of Logan Pass, that typically sees drifts of 40 to 80 feet deep.

Although plows are making quick work of snow in Glacier Park, it will still be at least a month before the Sun Road opens to vehicle traffic due to road construction. The park is conducting a number of pavement projects, including on the Sun Road, and the earliest the entire road will be open to vehicle traffic will be June 22.

As of May 28, the Sun Road was open to vehicle traffic between West Glacier and Avalanche on the west side and St. Mary to Jackson Glacier Overlook on the east side. Hiker and biker access is currently limited to The Loop on the west side as plow crews continue to work on the alpine sections of highway. A main road used by crowds of people to get to the San Diego County Fair will be closed for at least another week and a half as construction crews repair the damage done by a bluff collapse last month.

Northbound Jimmy Durante Boulevard has been blocked off to drivers since on April 20.

Repairs began earlier this month but the road is not expected to officially reopen until at least June 4 - after the first weekend of the San Diego County Fair.

The city of Del Mar declared a local emergency to expedite repairs and help recover expenses. On Tuesday, construction crews told NBC 7 the repairs were ahead of schedule.

However, the San Diego County Fair kicks off May 31 and an average of 60,000 people are expected to attend the fair each day. The fair is closed on Mondays and Tuesdays.

Traffic will be rerouted on Camino del Mar to Via De La Valle. Drivers will see signs and people holding flags to help them navigate the detour.

The cost of repairs is estimated at $1 million.

A road in Colorado is closed indefinitely due to a massive rock slide that produced two boulders large enough to wipe out a significant portion of the pavement.

According to the Colorado Department of Transportation, the boulders struck Colorado 145 on Friday between Cortez and Telluride. The slide included dirt and other rocks. 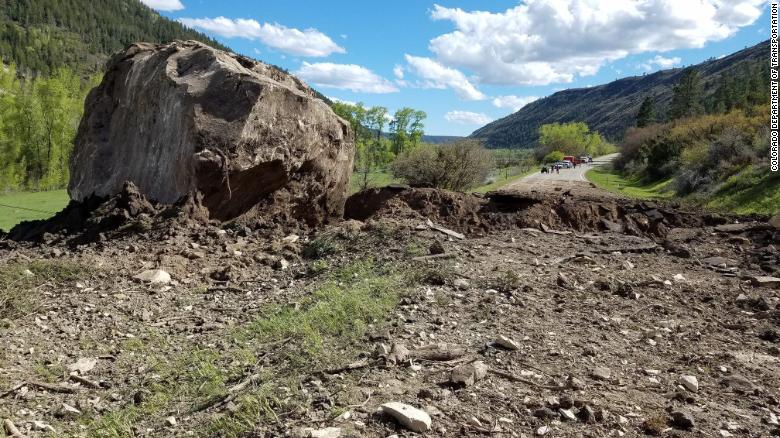 The rock slide occurred Friday on Colorado 145 between Cortez and Telluride. Picture via Facebook

The two huge boulders destroyed the full width of the highway pavement, leaving a trench about 8 feet deep across both lanes. The road is impassable, the department said. 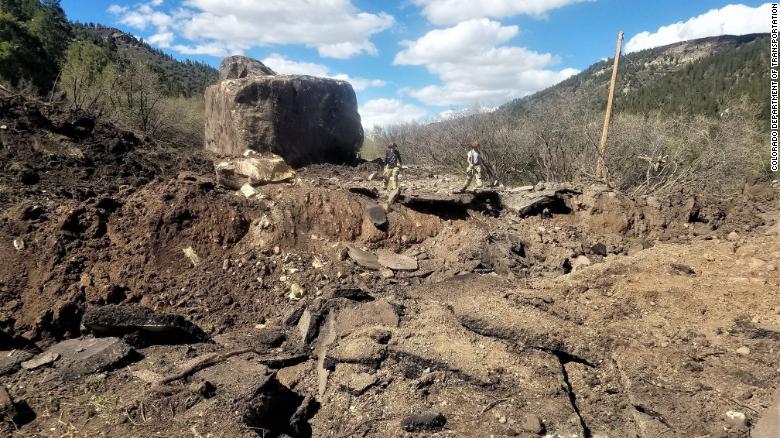 The biggest boulder will have to be removed in pieces. Picture via Facebook

One of the boulders remains embedded on the highway, according to the Colorado DOT, which described it as the size of a building and said it will have to be blasted into smaller pieces before being moved off the highway. 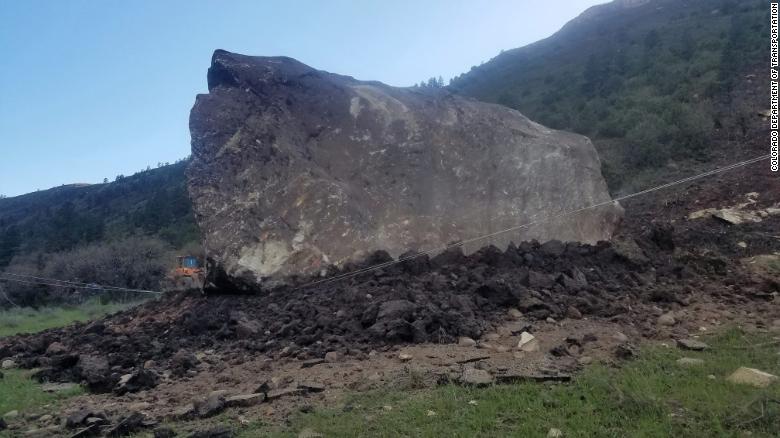 The road is impassible and will be closed indefinitely. Picture via Facebook


“A geo-technical team, equipment and supplies are being mobilized to the site, but it is not known when the road can be re-opened,” the department said in a post on Facebook.

At least two workers were killed in a landslide at a marble quarry in the Black Sea province of Kastamonu in Turkey.

The deceased workers were identified as Recep Kayan and Cemal Aysan.

An investigation into the incident has been launched.