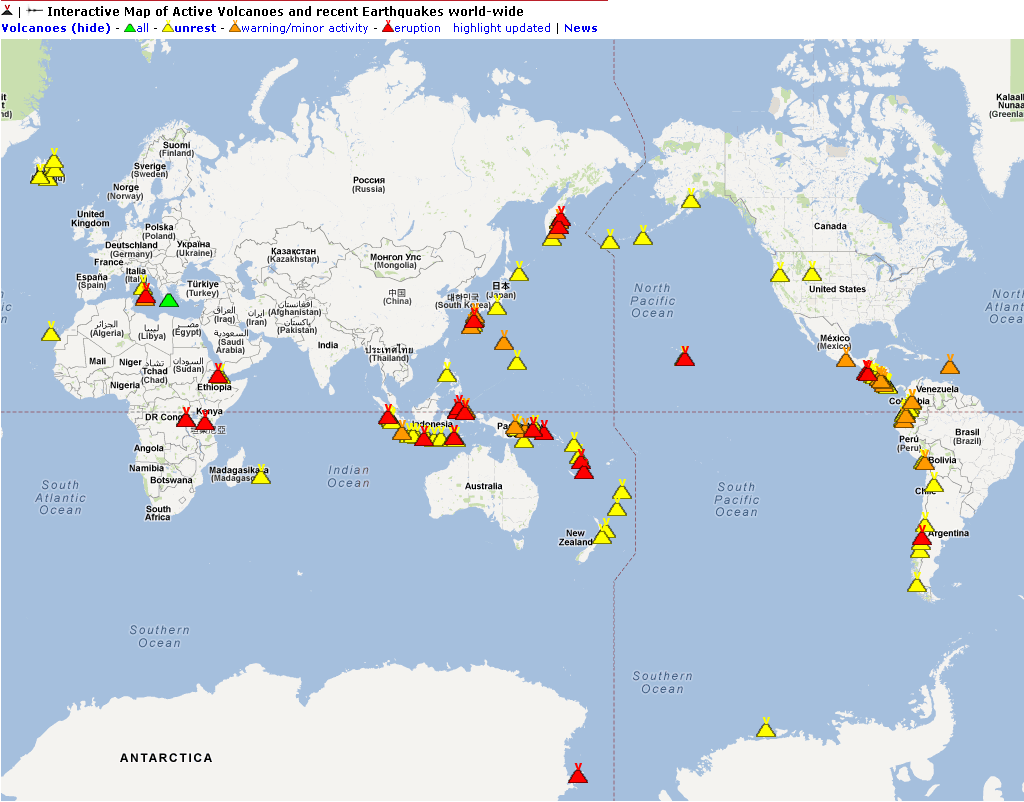 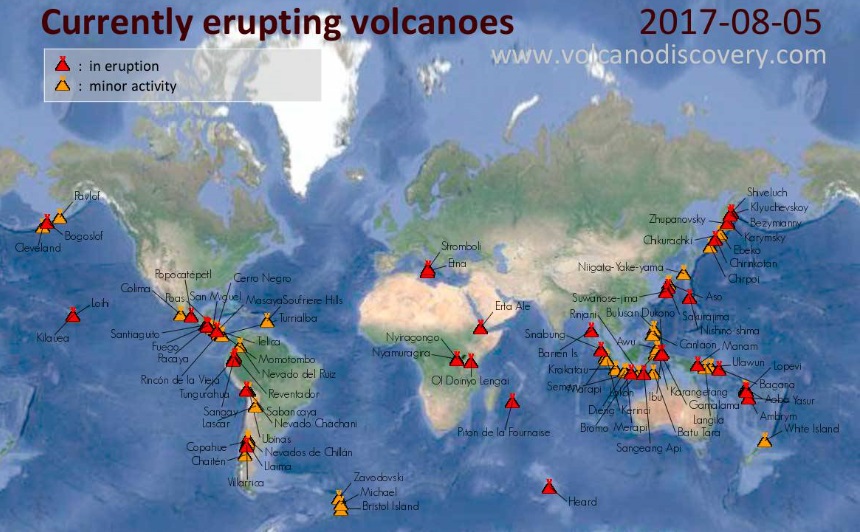 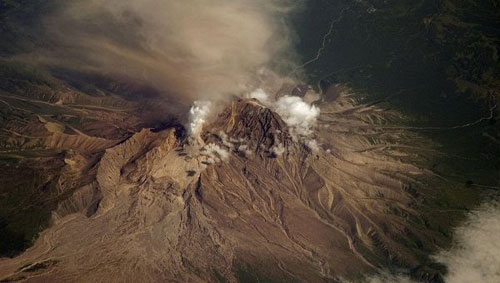 Scientists said ash continued to billow from a volcano in Russia's Far East, which could have an effect on international air traffic in the region.

The Shiveluch volcano on the Kamchatka peninsula was pushing ash as high as 6,000 meters (20,000 feet) and creating "light-intensity" tremors on the ground lasting as long as 40 minutes, the Far Eastern Institute of Volcanology and Seismology said in a written statement.

No towns in the area were considered threatened by the ash fall. Mount Soputan in Minahasa, North Sulawesi, emitted a cloud of ash on Sunday morning, reaching 1 kilometer in height. The volcanic eruption drew the attention of residents of Tompaso district in Minahasa, from which the volcano can be clearly seen. “I was surprised and panicked seeing the eruption at about 10 a.m. It was a big eruption; the clouds and ash looked very tall; almost the same as those produced in the big eruption several months ago,” said Tompaso resident Riko Tamunu, 24. He said he was attending church when the eruption occurred, adding that there had been smaller eruptions earlier at about 6 a.m. on Sunday.

Some Tomoso residents also left their houses, churches or other buildings upon hearing the sound of the eruption. Several residents captured the event using their cell phone camera.

Indonesia Mt.Papandayan update:  Indonesia has banned 1 mile region from the volcano craters to the tourists.

After alert level raised yesterday, Indonesia has banned 1 mile region from the volcano craters to the tourists. Mount Papandayan craters are popular tourist attractions but at present the situation is quite dangerous due to emission of hydrogen sulfide and carbon monoxide gases from the volcano. The alert level to the Mount Papandayan has been raised to the second highest. Since there have been incidents in the past where tourists have ignored the warnings and went to the danger zone anyway, Indonesia is taking strong measures to prevent that. From past few years Indonesia has taken strong steps to stop tourists from entering the danger zone. Indonesia officials currently are making sure that there are no tourists in the region. The warning has been spread to the nearby villages and the area around the crater is being checked for the tourists. (Rsoe)

Alaska - Cleveland Volcano update/warning:  Volcano could be gathering steam for a much more severe explosion.

A volcano in Alaska’s Aleutian Islands has been erupting since the end of July, but could be gathering steam for a much more severe explosion. According to scientists at the Alaska Volcano Observatory (AVO), the Cleveland Volcano, a 5,676-foot peak located about 940 miles southwest of Anchorage has been seeping magma for several days. But this activity could only be a precursor to an explosive event powerful enough to send ash into the atmosphere. “The dome, if it continues to grow, could plug up the crater, creating pressure that could result in “a fairly sizable explosion that could throw ash up to flight levels,” said John Power, scientist in charge at the observatory, a joint federal-state operation. Observers on a August 8 NOAA flight photographed a small, dark-colored dome centered at the bottom of the summit crater. In the last clear satellite view of the summit on August 9 the lava dome was about 60 meters (197 feet) in diameter. The volcano is situated on Chuginadak Island which is currently uninhabited, so no humans are in immediate danger even if the volcano does produce a bigger eruption. The closest community to the volcano is Nikolski, an Aleut village of about 20 people located 45 miles to the east. However, the island does lie directly in the North America-to-Asia flight corridor used by major airlines. Powers also said that the secretion of lava and the building of a bigger dome is uncharacteristic for the Cleveland Volcano, but big explosions of other Alaskan volcanoes have occurred following a dome-building event. The observatory says the last significant eruption of the 5,676-foot volcano began in February 2001 and eventually produced a lava flow that reached the ocean. (Rsoe) From today, August 12, morning the eruptive activity of Etna volcano has restarted. Based on visual and instrumental observations of the volcanic phenomena, the Civil Defense's Department (DPC) Central Functional Centre for Volcanic Risk issued a warning of "High criticality" for the summit area of ​​the volcano and of "Ordinary criticality" for the areas in the middle slopes, at the foot of the mountain and in the urban areas. Starting from 6:00 am local time the monitoring networks of Catania's National Institute of Geophysics and Volcanology recorded a sudden increase of volcanic tremor and at 8:07 am the surveillance video cameras recorded a Strombolian activity at the Pit Crater, at the base of the south-eastern crater of the volcano. This activity increased and brought at 10:03 am to a fountain of lava and the leak of an overflow lava flow, that extended from the Pit Crater to Valle del Bove. Contemporaneously, it was moreover reported the release of significant amounts of volcanic ashes in the atmosphere that transported by the wind are spreading to the South-East. Until August 22, 2011, it's banned the access to the volcano over the altitude of 2,920 m - next to Torre del Filosofo- both on the northern and southern sides, as established by an ordinance of Catania's Prefect. The Central Functional Centre continues monitoring the phenomenon through its competence centers responsible for the monitoring and surveillance of the Italian volcanoes (Sections of INGV and University of Florence), through the operational structures (Mountain Rescue and Guardia di Finanza and Corps of Forest Rangers of Sicily region) and local offices.

It seems that Katla volcano earthquakes are increasing again. This increase appears to be similar to the increase in earthquakes before the glacier flood from the 9th to 17th of June and onwards until the glacier flood on 8th and 9th of July. The only difference now is that I am seeing this pattern earlier since I now know what to look for this time around when this is in its early stages.

How this is going to develop now is a wait and see process. But this might take as long time to get interesting as it did in June to July, to the event that ended with the glacier flood from Mýrdalsjökull glacier. Mt. Ibu in West Halmahera regency has been emitting thick smoke, causing its alarm status to be raised on Sunday.


Ridwan, a volcanic observer at Mt. Ibu said the mountain’s activities had intensified over the past two weeks. Hundreds of small eruptions have been recorded by the seismograph. “There were numerous tremors. Therefore we increased its status to alert level II,” he said yesterday.


Ridwan said the mountain had been closed to hikers and people were prohibited from getting within 3 kilometers of Mt Ibu’s crater. “We announced this two weeks ago and have intensified our observations. We hope people will be aware,” he said.

One of Alaska’s most active volcanoes has started erupting, according to the Alaska Volcano Observatory (AVO).

The 1,730 m (5,676 ft) high Cleveland Volcano, also known as Mount Cleveland, began erupting early on Tuesday. However, the stratovolcano’s remoteness is limiting opportunities for its study, reported the AVO which is relying heavily on satellites for monitoring.

According to the AVO: “Without a real-time seismic network on the volcano, AVO is unable to track local earthquake activity related to volcanic unrest, provide forecasts of eruptive activity, or confirmation of explosive, ash-producing events. AVO is monitoring the volcano using satellite data as it becomes available. Such data suggests that effusive eruption of the lava dome in the summit crater is possibly continuing.”

The volcano is primarily hazardous to aircraft; many of the flights over the north Pacific approach the vicinity of the volcano, and volcanic ash released from eruptions can damage sensitive electronic equipment and sensors.