LOS ANGELES - Many workers who have not been vaccinated against the coronavirus may risk losing their job — along with unemployment benefits — as business-based COVID-19 vaccine mandates take effect.

Businesses are increasingly mandating that their workers get a COVID-19 vaccine, citing health concerns and sweeping new federal requirements for large employers. Those who do not follow company policies are in many cases subject to termination of employment.

Unemployment benefits are generally available to those who were let go through no fault of their own, according to the U.S. Chamber of Commerce. But if someone was fired due to misconduct or violating a company policy, they might be ineligible to collect unemployment.

Multiple companies and organizations including United Airlines, UCHealth System and Novant Health have or intend to fire unvaccinated workers. In fact, 46% of organizations plan to institute a vaccine mandate where legally permissible, according to a recent survey by research firm Gartner Inc., which could mean thousands of people could potentially be forced to leave their jobs. The first cancellations for Friday were announced late Thursday night, when Washington State Ferries said a pair of morning sailings for the Seattle/Bremerton route were being canceled due to a staffing shortage.  A reduced schedule was then announced for the Fauntleroy/Vashon for the same reason, followed by the cancellation of dozens of Friday sailings for the Edmonds/Kingston ferry.

More cancellations then began flooding in shortly before 5 a.m. Friday, including 12-hours worth of sailings for the Mukilteo/Clinton route, as well as all sailings for the day through 8:50 p.m. after a single roundtrip at 6:10 a.m. for the Anacortes/San Juan Islands ferry.

“20 years doing traffic in the city, NEVER have I EVER seen anything like this,” KIRO Radio Traffic Reporter Tracy Taylor tweeted.

As of 6:45 a.m. Friday, Taylor reports a total of 141 cancelled sailings for the day, as well hours-long delays for many other routes.

Addressing the staff shortage on Twitter, WSF noted that “COVID-19 restrictions have not allowed us to hire or train new recruits at the same rate as prior to the pandemic.” Despite that, over 100 new crew members have been added so far this year.

While WSF typically ramps up hiring once a year before the summer begins, it says it is now “continuously recruiting new employees” to account for its lack of staffing.

You can stay up to date on further cancellations for updates on ferry sailings today here. 'Isolate if you have Covid-19 symptoms but test negative'

A director of public health is advising people to isolate if they have Covid-19 symptoms even if they subsequently receive a negative PCR test result.

GPs in the West said they were seeing "a stream of patients" who had received positive lateral flow tests, who went on to receive negative PCR results.

The UK Health Security Agency said it was investigating the cause.

But one Independent SAGE adviser has said self-isolating after a negative test may not be practical for some.

While it is understood lateral flow device (LFD) tests can sometimes produce a false negative, false positives are much rarer.

The UK Health Security Agency said it had been made aware of "some areas across the country" anecdotally reporting positive LFD results with subsequent negative PCR tests. 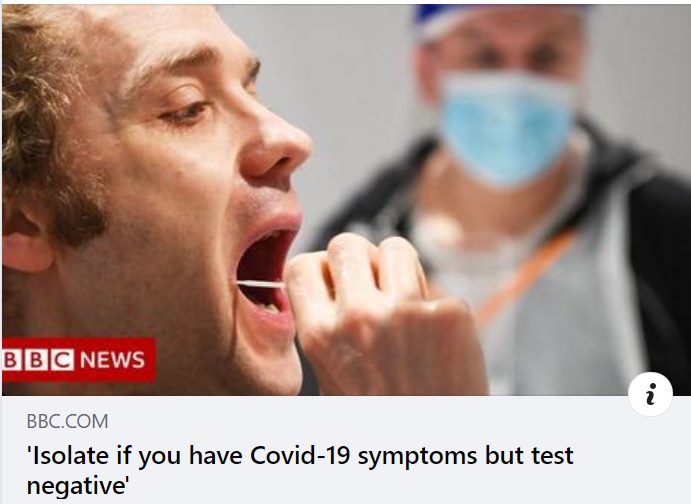 Comment by Juan F Martinez on October 9, 2021 at 5:48pm
Whoops! Double vaxx didn't work!!
“I recently tested positive for Covid and yesterday was moved into hospital for further care and observation,” wrote Wilson in an Instagram message. “Even though I am double vaccinated and took the right precaution set in place through the ISL, I have managed to fall to this virus.
“It’s been a crazy few months and I believe being run down physically and mentally may have made me more susceptible.
“I feel extremely unlucky but I do believe this is a huge wake up call, Covid is a serious thing and when it comes it hits very hard. I’d be stupid not to say I wasn’t scared,” the star added. 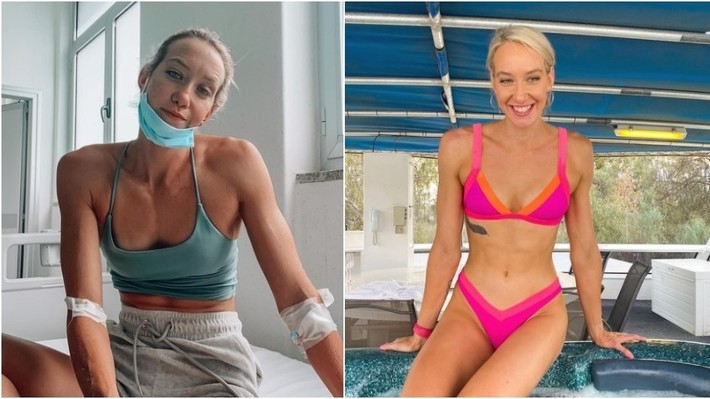 Ellume, an Australian company that supplied over 3.5 million FDA-approved Covid-19 testing kits to the US, has now recalled nearly 200,000 of them due to an unspecified manufacturing issue that resulted in false positives.
The Food and Drug Administration issued a notice on Tuesday alerting the public of “the potential for false positive results” with certain lots of Ellume’s Covid-19 Home Test, a rapid antigen kit used to detect the coronavirus using nasal swabs and a smartphone app. 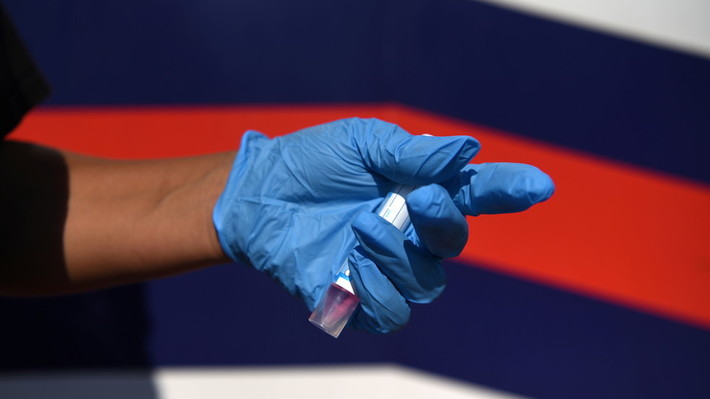 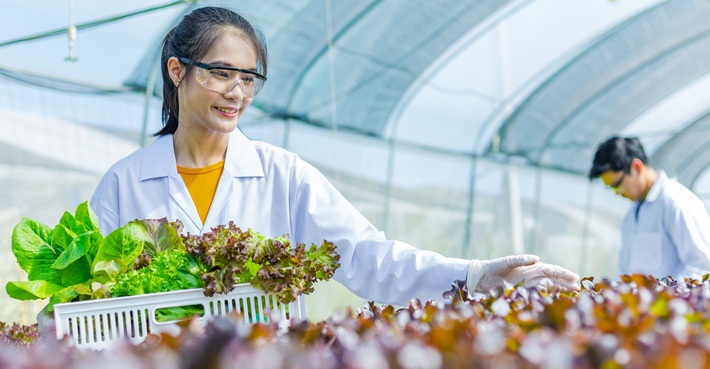 Scientists at the University of California, Riverside are studying whether they can turn edible plants like lettuce into mRNA vaccine factories. The project’s goals are threefold: showing that DNA containing the mRNA vaccines can be successfully delivered into the part of plant cells where it will replicate, demonstrating the plants can produce enough mRNA to rival a traditional shot, and finally, determining the right dosage.
“Ideally, a single plant would produce enough mRNA to vaccinate a single person,” said Juan Pablo Giraldo who is leading the research. “We are testing this approach with spinach and lettuce and have long-term goals of people growing it in their own gardens. Farmers could also eventually grow entire fields of it.”

Biden:  Get vaccinated to protect yourselves from hurricanes, y'all. 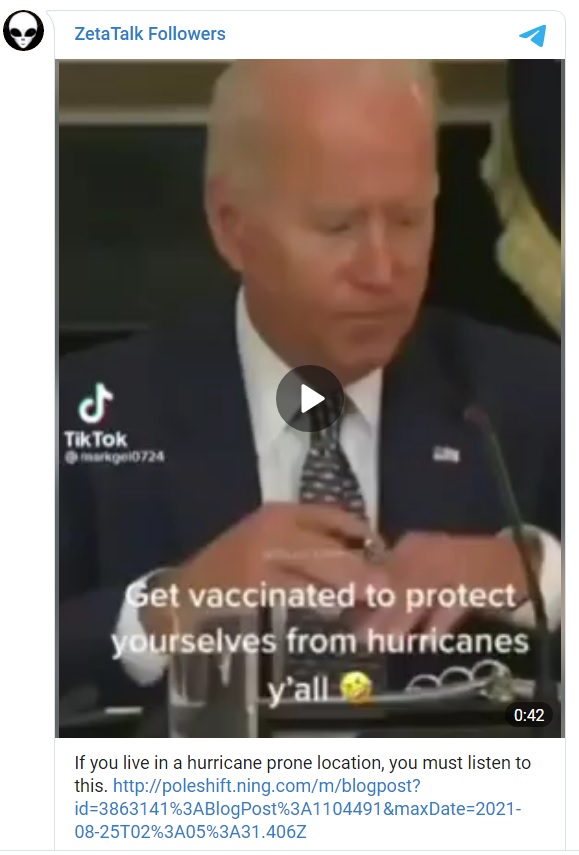 Despite the Democratic Party’s incessant claims that Donald Trump was a “tyrant” and “dictator,” the raft of executive orders that Joe Biden has rammed through Washington, DC are enough to make a Caesar blush. Forcing Americans to submit to medical treatment is Biden’s personal ‘crossing the political Rubicon’ – another one of those “you’re either with us or against us” type of moments that colored the Bush-era “war on terror.”

In this latest chapter of American history, however, the unvaccinated are at risk of standing in for the likes of al-Qaeda and Islamic State. Indeed, given the level of liberal lunacy now infecting every square inch of the America cranium, the unvaccinated could become the targets of a virtue-signaling hate campaign that could easily get out of control, especially when it is considered that there are more guns in America than Americans.

Whatever the case may be, when future historians sit down to write about the America of the early 21st century and its second civil war, September 9 may go down in the history books as the day all hell broke out in earnest. 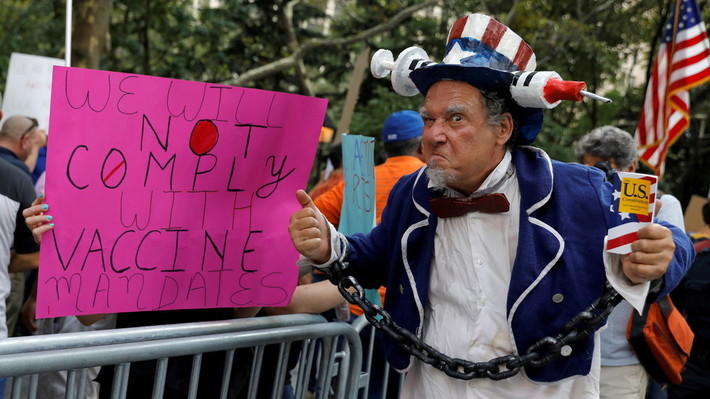