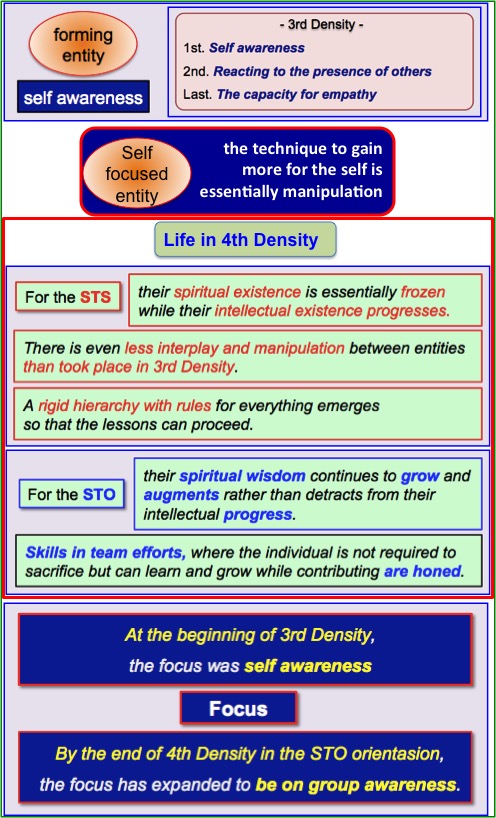 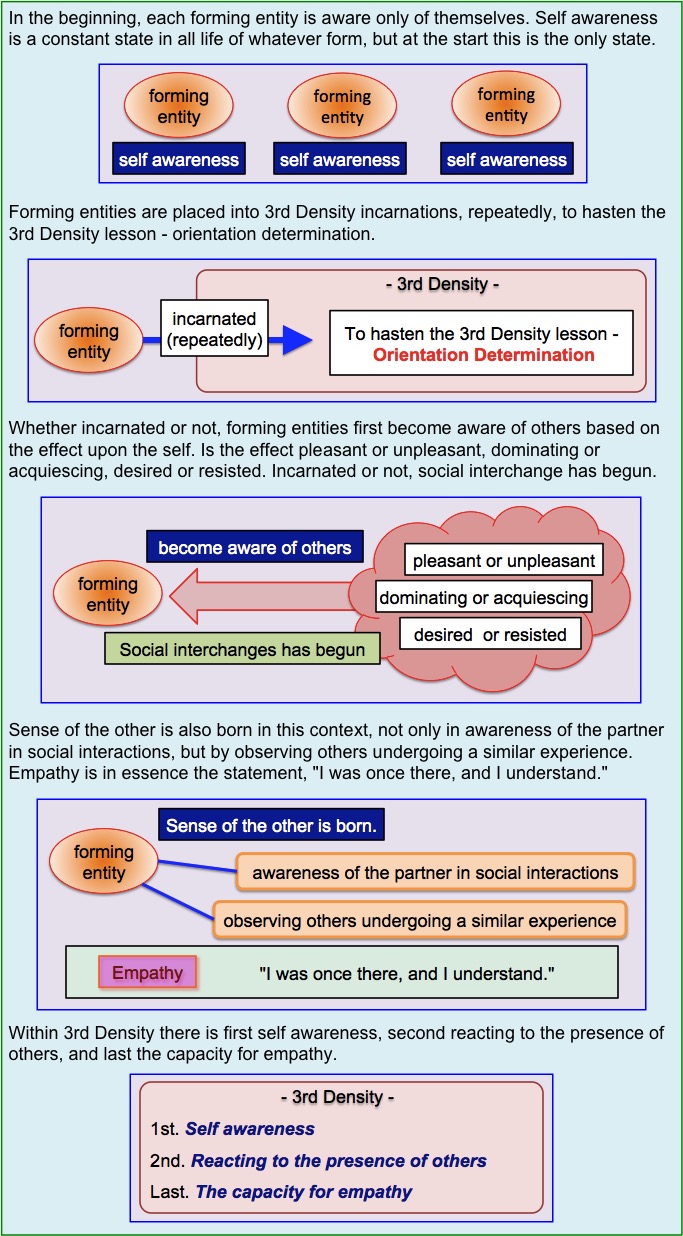 Zetas said that only "very young and undecided souls can be influenced by environment". So, it is the environment that is a factor decisive to young soul's orientation? (that's why Balanced Setting must be required.). Now, 3d Density is mixed setting where young souls are allowed to do onto others as they please, and in this case STS invariably take advantage of STO - those 7% of bad guys that are, however, on the top of the heap, commandeering rules - a slavery on a global, planetary scale. And, connected to previous one - why in similar circumstances young souls choose and lean in different directions? Some are feeling remorse for their actions and some don't? Is it just Free Will or some kind of predisposition?

The soul has no predisposition, but the first incarnation can lean it in one direction or the other. However, forthcoming incarnations are balanced by the Spirit Guides so as to give it a different picture. Service-to-Self as we have explained is not so much a leaning as an immaturity, and why some souls grow and other stay immature is one of God's mysteries.

* ZetaTalk for Single planet for reincarnating

Could the Zetas mention if there are any other races besides humans incarnating into the hybrids or is this just for human souls. There are other race forms here helping out and are they part of the program also?

All intelligent life forms are available for any sparked soul to use during an incarnation. The Birthing Guides obviously choose to use a single planet for reincarnation during the early days of a soul's development, so that progress can be made on the spiritual lessons rather than adapting to yet another environment. Once a soul has graduated out of 3rd Density, it is possible for the soul to be placed on other worlds as a Star Child. Certainly, this includes placement in humans today on Earth, and into the hybrids.

* ZetaTalk for In Spark souls, Separate from others

I have thought about this for a while, humans and other beings have hard lives, often seemingly unfair and cruel but there are lessons to be learnt and the soul is strengthened because of it, tough love. But what about all the insects and other creatures small and large that do not have souls, life in nature can be really hard. If they have no soul, then what's in it for the little guy?

We have explained how it is that souls spark in intelligent creatures. What is required is the ability of the intelligent creature to understand that is it separate from others, be conscious of this. Any creature that can conceptualize itself as a separate entity provides the stimulus to spark a soul. Despite the ability to solve problems and be trained, dogs and monkeys and dolphins do not entertain themselves as separate entities, able to promote themselves above others at the sacrifice of those others. What is seen is instinct, solely. Animal and plant life is born, lives, and dies. It is this way on all worlds that sustain life, and the vast majority do not have any intelligent life that can spark souls. Why God so structured the Universe in this manner, we do not know.

* ZetaTalk for Consciousness; Separate from others; Spark of soul

The brain works on chemistry. Each memory is a chemical path running along neurons to connect to another chemical path. When the memory is to be blocked, because the human is distressed when recalling the memory, the body inserts a chemical break in that path, which can be restored later as it is not permanently broken, only altered. This is why painful memories seem to fade, when joyous memories are recalled fully, over the years. Consciousness is simply the ability of an organism to conceptualize itself as separate from others. Obviously, intelligence exists in animals such as apes, who can figure out how to get food using tools and use language to some extent. But the ape does not see itself as separate from the world around it. Unless this ability evolves, a soul does not spark in the animal, as it is just following instincts in the main.

What is the purpose of having so many 'new' souls incarnating for this shift? On the site I read that of the over 6 billion souls that incarnated for this event, only 1 billion were reincarnating. The rest were 'new'.

We have explained, in what Nancy calls the Density section of ZetaTalk, that more is required to form a soul than an opportunity to incarnate into a conscious intelligent creature such as man. The stuff of souls may gather in such a creature, but not spark into a coherent soul. At death, such a gathering of the stuff of souls will dissipate and there is nothing for the Sprit Guides to gather at death. Trouble, challenge, adversity, all help this sparking process, as it helps the young soul develop empathy for others and move toward the Service-to-Other spiritual orientation. As Earth is in a population explosion, more bodies than there are souls to reincarnate, most are young souls who will not spark. Most lives without incarnating souls do Not spark souls, please be advised. This is termed a soul abortion, which is not cause by anything but the life itself, is natural, thus.

* ZetaTalk for Wealth or poverty, good looks or disabilities, high IQ or low

Regarding people with disabilities, do they all have a soul? What kind of soul do the Spirit Guides incarnate into these people? Is there a sort of punishment for an Service-to-Self soul?

The Birthing Guides do not simply allow souls into hale bodies, as the goal is to allow the soul to progress in its lessons. Wealth or poverty, good looks or disabilities, high IQ or low - all of these situations afford the young soul opportunities for growth. It varies greatly. These types of choices are not karma driven, as is often presumed, but rather focus on the lessons to be learned, the choices to be potentially taken.

I was wondering in these times while the polarization is going on what's happening to the children of the parents that are polarizing to one side or the other? With families breaking up and children being tossed back and forth during custody battles wouldn't the polarization also apply in the event of which parent gets the child/children?

When a soul is placed into a newborn's body by the Spirit Guides, it is known what the environment will be like, spiritually. It is known what the likely physical disabilities will be, for the babe, and what kind of social environment the babe is likely to experience in the neighborhood and extended family. Some souls are placed into an environment where the contrast between Service-to-Other and Service-to-Self is sharply delineated, as a lesson. There are many reasons for this, among them: