On Monday, May 11th, we had a surge of power through our house so great, that it magnified the brightness of our lightbulbs tenfold.  The lights and one of the circuits proceeded to burn out, and the surge fried anything that was plugged in—as a strong burst of magnetic energy would. Even a surge strip did not keep the cable box from being fried. This type of situation has never occurred in our home in over 50 years. The event occurred at a little after 13:00 pm CST, or 18:00 UTC. No source was found for the surge, only a fried wire, which had caused a burning smell in the home. Certainly a malfunctioning wire, more than like fried by the surge as well, would not cause a surge in power, but a reduction in it. Would the Zetas care to comment on whether we are now experiencing  EMPs from PX on a more frequent basis? If so, would it be recommended that all electronics not in use be disconnected from their power source? Space was relatively quiet, but the magnetosphere was fluctuating widely. [and from another] http://www.manchestereveningnews.co.uk/news/greater-manchester-news... The cut was said to have been caused by an electrical surge. People in the area say "Smoke was coming from the electric cupboard from 86 Deansgate when the power surge hit. 4 fire engines responded to the call". Jade Barrow is a receptionist at 86 Deansgate, and said the whole building shook. She said: "The firemen explained to me that an electrical surge is like 2 magnets hitting each other. That's why it all shook because of the force."  [and from another]https://poleshift.ning.com/profiles/blog/show?id=3863141%3ABlogPost... May 15. After 15 days with approximately 300 hours of missing data, it appears the uninterrupted BATSRUS RCM image feed has resumed. 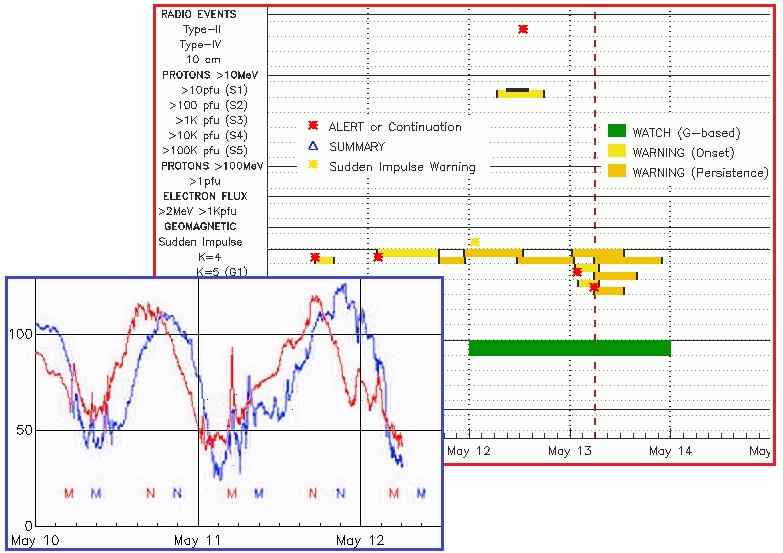 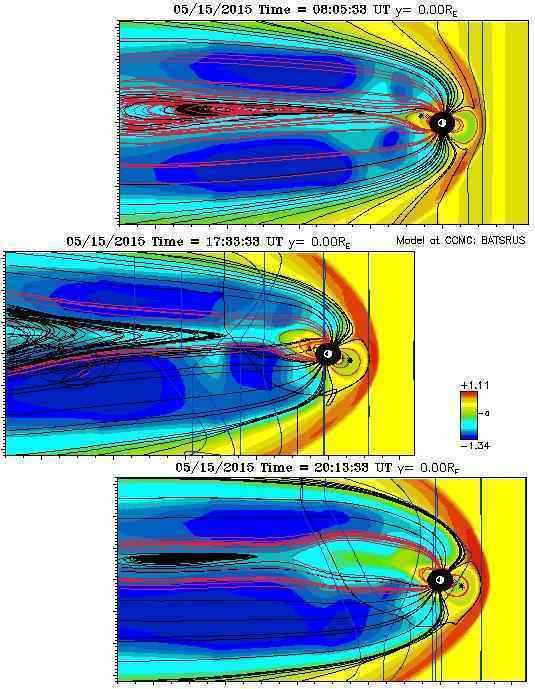 Air traffic in and out of South Florida was disrupted for at least two hours Thursday after a power outage shut down the radar system used by the Federal Aviation Administration to control arriving and departing flights, officials said.

Affected were flights to and from Fort Lauderdale-Hollywood International and Miami International airports as well as South Florida satellite airports, according to federal officials.

“We had flight delays averaging one hour,” affecting approximately 65 flights, beginning at about 11 a.m., according to Greg Meyer, a spokesman for Fort Lauderdale-Hollywood International. Among those flights were 33 departures and 36 arrivals, he said.

The FAA issued a ground stop for flights into the two busy airports after a power outage at the Miami Terminal Radar Approach Control (TRACON). Miami Air Route Traffic Control Center took over the airspace normally handled by the TRACON to handle flights that are in local airspace, according to FAA spokeswoman Kathleen Bergen.

Bergen said the power outage was not related to a fire Tuesday in a Florida Power & Light substation in west Miami-Dade County that knocked out power to several thousand customers.

Although planes waiting to take off were backed up on the runway at Fort Lauderdale-Hollywood International at 1 p.m., Meyer said normal operations were resuming.

In a statement, Bergen said that FAA technicians had returned all systems to service at Miami Tower/TRACON by 1 pm., and operations were returning to normal.

At 12:30 p.m., flight controllers began accepting arrivals with increased spacing of 30 miles between flights, Bergen said, while departing flights were leaving with 20 miles spacing between them. 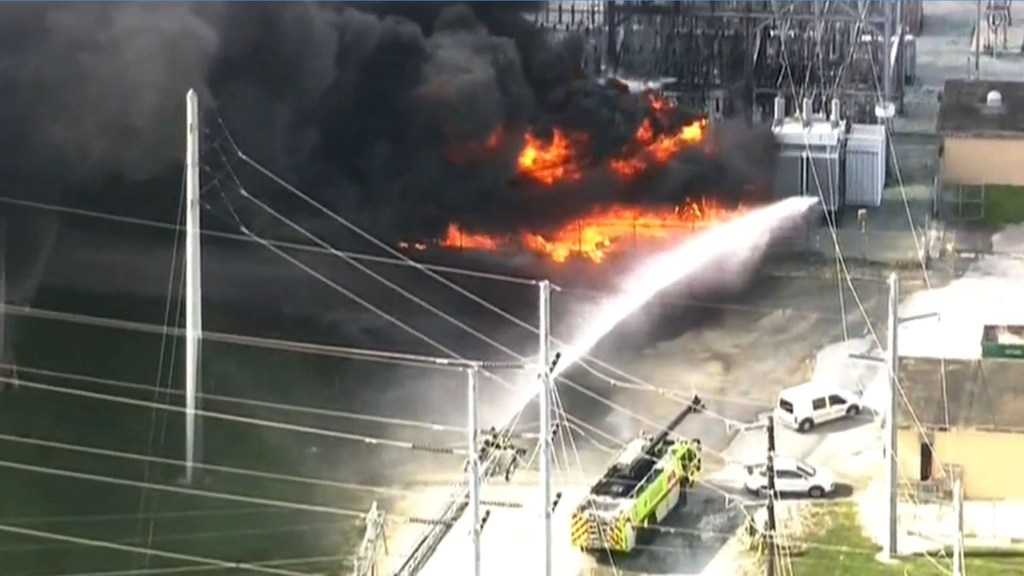 Officials say about 10,000 Miami-area homes and businesses were left without power following a fire at a Florida Power & Light substation.
No injuries have been reported.
Firefighters were using a ladder truck to douse the flames. Around 5:30 p.m., about 80 percent of the fire was contained.
The substation is located just north of Miami International Airport.
"The good thing is that no one was injured; we were able to respond in an coordinated manner and extinguish the fire safely, " Lay said.
People in the area reported hearing an explosion moments before seeing the smoke and flames, but McGrath said the cause of the fire remains under investigation.
The fire caused an interruption in power for at least 10,700 Florida Power & Light customers initially.
At 6 p.m., the number of people without power was reduced to around 1,600.
Milam Dairy Road between Northwest 58th Street and Highway 934 was closed as a result of the fire. The Palmetto Expressway remained open but exit ramps were clogged and northbound traffic was snarled.

August 16, 2016 https://www.washingtonpost.com/local/public-safety/major-transforme...
A fire that broke out around midnight Monday in electrical equipment below the sidewalk at 18th and L streets NW caused that intersection to be closed during Tuesday’s morning rush hour, authorities said.

Drivers were advised to avoid the area.

Flames and thick smoke billowed from an underground vault early Tuesday just outside a clothing store and an office building.
The flames leaped about 10 feet into the air above a street still glistening with moisture from Monday night’s rain. The blaze appeared to break out near the southwest corner of the intersection, which is near both Connecticut Avenue and the K Street corridor.

The D.C. Fire and EMS department described the blaze as a major transformer fire.

Crews from Pepco arrived around 1 a.m. at the scene and cut power to the device.

By 2:30 a.m., D.C. firefighters said in a Twitter message that the fire had been extinguished and their units had left the scene. No one was injured in the incident.

The cause of the fire was not immediately known and crews were still “assessing the situation,” according to Pepco spokesman Marcus Beal. However, transformers can build up large quantities of heat. Summer air conditioning operations may place high demands on transformers, which step down voltages from those used with feeder and transmission lines to those used for interior wiring.

By Tuesday morning, about 100 Pepco customers were without power. Most of those were office buildings in the area. Beal said Tuesday morning that there was no estimated time for when the power would be restored.

United Airlines flights grounded across the U.S. because of a computer system malfunction.

Glitch at the International Space Station on Tuesday caused its position in orbit to change  http://www.reddit.com/r/worldnews/comments/399458/glitch_at_the_int...

27.05.15. An electrical failure at Belgium air traffic control forced the closure of airspace above Belgium on Wednesday morning, Eurocontrol said in a statement. The regional airspace will remain shut until at least 4 p.m. local time, the Brussels Airport authority and Eurocontrol both said.
http://www.nltimes.nl/2015/05/27/power-cut-halts-belgian-airspace-u...