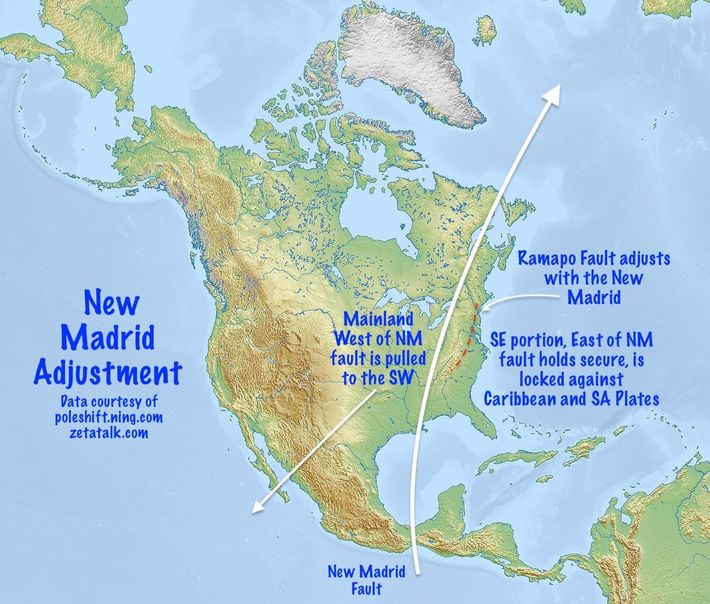 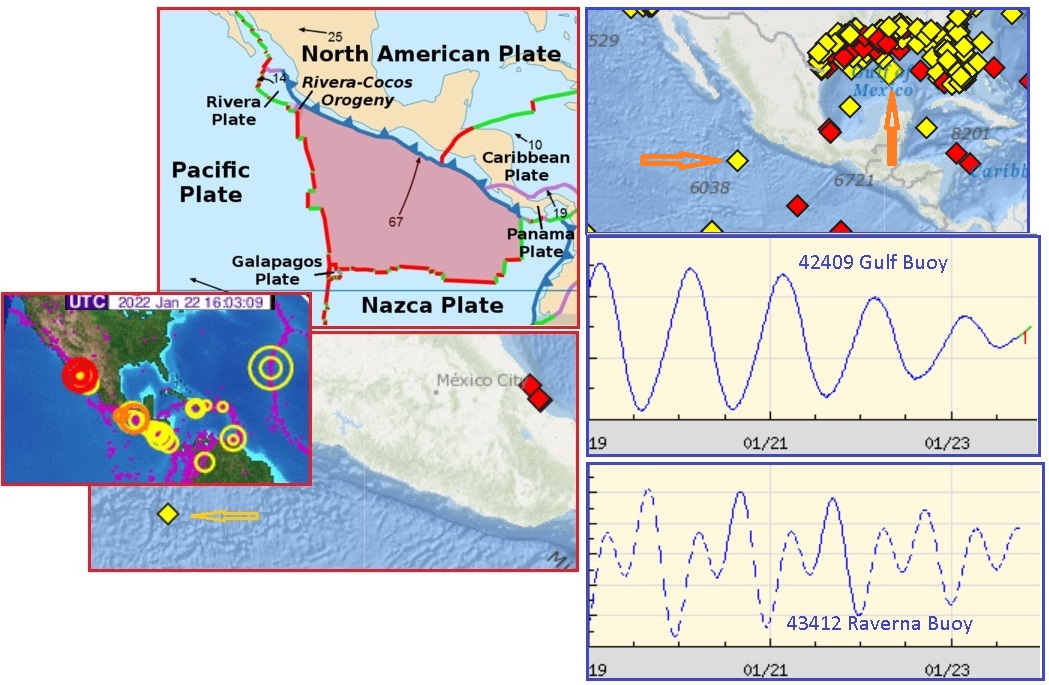 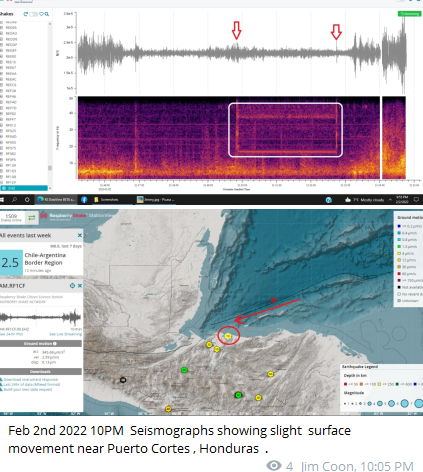 Cocos continues to fracture! A new piece being broken off just below the Isthmus. 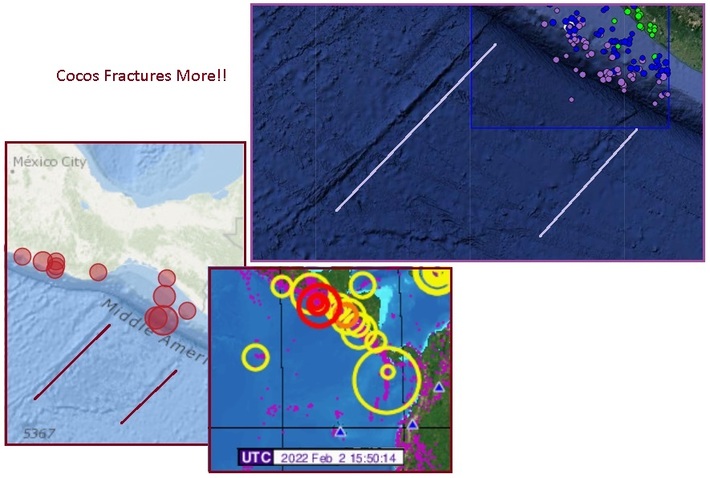 San Diego, the center of the bowing stress that has been imposed on the N American Continent, is having booms. An the shift of the Mainland Portion to the SW also includes a push to the West, as the buoy off Vancouver shows.

Councilman Corey O’Connor said that the collapse of the vital bridge could effect traffic in the area for years: ‘This is a vital road, artery, in our area,’ he said. 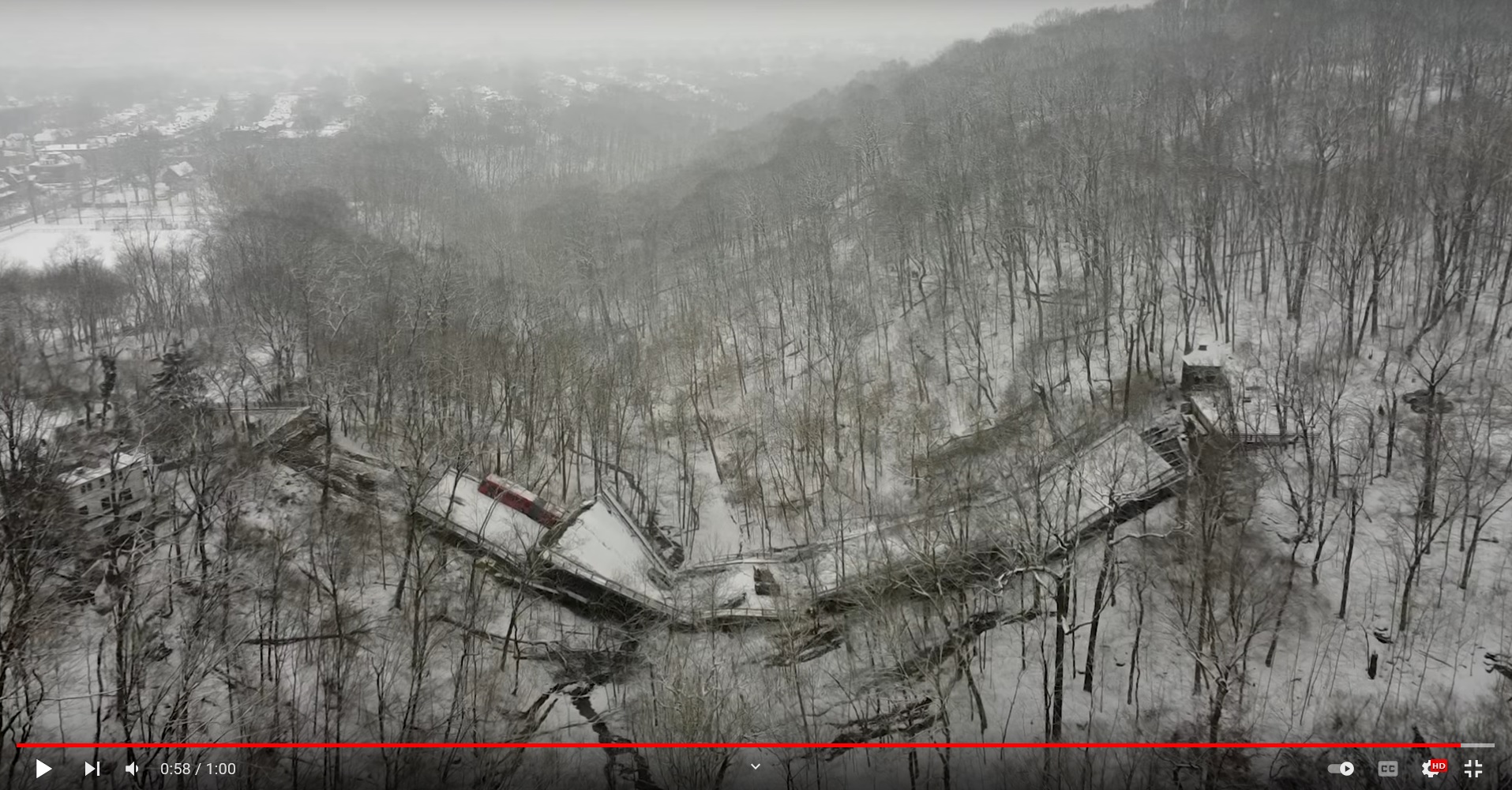 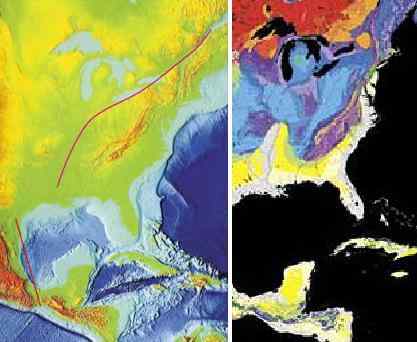 If the quakes in OK and TX indicate that the land there is being pulled down to the SW, then how does this affect the hard rock of the Ozarks? We have confirmed that when this slide to the SW pulls the hard rock on either side of the town of New Madrid apart, the rupture of the New Madrid fault line will occur. Meanwhile, the Ozarks are experiencing rock compression, and this results in electronic screech in the rock. This screech is an attractant for any charge in the atmosphere, which then wants to ground. This blue spiral is very similar to the Norway spiral in 2009.

http://poleshift.ning.com/profiles/blogs/spiral-warnings?xg_source=...
Note the location of the Ozarks spiral. It stands between the OK quake swarms and the town of New Madrid. Rock strata maps show that the soft rock surrounding the Gulf of Mexico ends at the town of New Madrid, which stands like a sentinel at the gateway between East and West in the continental US. The exact date and time of the jolt that will start the final New Madrid Fault Line rupture is not yet established, but it is clearly close at hand. The Ozarks will not tear apart. The Appalachian Mountains will not tear apart. But the fault line will.

When the rock on either side of the fault at the town of New Madrid has been pulled apart such that the rock under New Madrid has become thin and lost its ability to hold the two sides together, it will rupture.

There was a big “pop” then rumbling for 10 seconds.
Our house shook and it seemed like it lasted forever!

The Cocos Plate has fractured! Along the line from the Isthmus of the Teh Ridge down along the Teh Ridge. Also note a new quake where the Rivera Platelet is narrowly connected to the Cocos Plate. This is likely now becoming an independent platelet too. Now the SW slide can pick up speed! 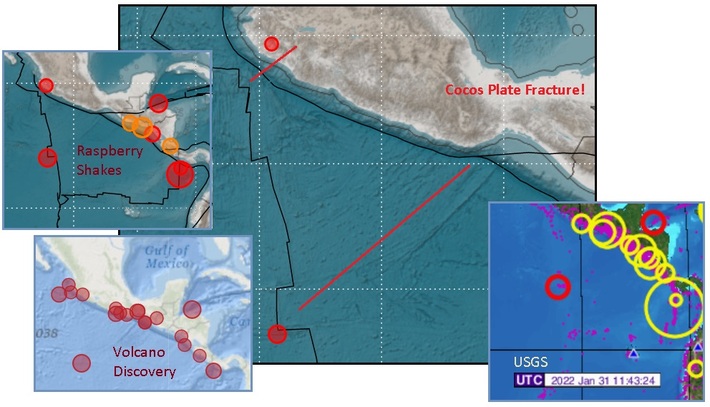 Why do TX and OK have so many quake swarms? It’s every day, and endless but the rest of the country does not have this. 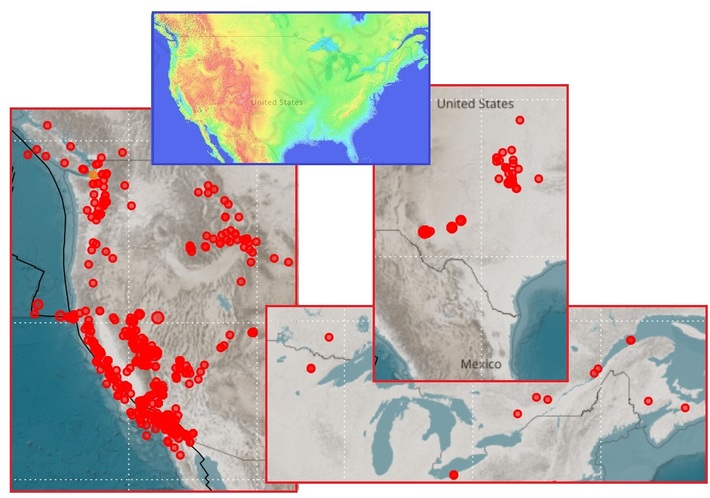 SOZT
We have often addressed stretch zones and why they are considered silent. A crevasse may open up, or a bridge or structure pull apart and drop, but these events are not accompanied by earthquakes. It is where rock masses are asked to make room for other rock masses that earthquakes occur. During all the predecessor events that have preceded the big New Madrid rupture, a drop to the SW of the Mainland Portion does not seem to have happened. Or did it?

The Mainland Portion includes the mountains in the west, which stretch along the Continental Divide from Canada down to the tip of Mexico. When these are asked to adjust, whether via a slip-slide or subduction or rock shattering clash, they complain with jolting earthquakes. This can be seen on the earthquake charts. The expanding Seaway likewise records quakes in the rock on either side, though the record shows destruction occurs primarily in the soft rock that is amenable to a stretch.

But what about the daily swarms in Oklahoma and Texas where such hard rock strata is not a factor? The Mainland Portion of N America has steadily been sliding to the SW, albeit silently. If one were to take a geological survey in the regions of Oklahoma and Texas where these swarms occur, one would find landmarks further apart or closer together, or roadways that skew where they are supposed to be straight. At what point will this silent shift to the SW affect the New Madrid rupture?

When the rock on either side of the fault at the town of New Madrid has been pulled apart such that the rock under New Madrid has become thin and lost its ability to hold the two sides together, it will rupture. Thus the steady silent slide to the SW represented by these quake swarms in Oklahoma and Texas are key to the rupture to come!
EOZT

New Madrid Earthquakes of 1811–12
https://www.britannica.com/event/New-Madrid-earthquakes-of-1811-1812
Ground shaking was felt as far away as Canada in the north and the Gulf Coast in the south. Eyewitness accounts noted that the shaking rang church bells as far away as Boston, Massachusetts, and brought down chimneys in Cincinnati, Ohio
[and from another]
Summary of 1811-1812 New Madrid Earthquakes Sequence
https://www.usgs.gov/programs/earthquake-hazards/science/summary-18...
They were by far the largest east of the Rocky Mountains in the U.S. and Canada. The area of strong shaking associated with these shocks is two to three times as large as that of the 1964 Alaska earthquake and 10 times as large as that of the 1906 San Francisco earthquake.
[and from another]
The Great Midwest Earthquake of 1811
https://www.smithsonianmag.com/science-nature/the-great-midwest-ear...
Tuttle’s team excavated potsherds, spear points and corn kernels and realized that many of the sand blows were more than 200 years old. “Some had archaeological sites on top of them with 2,000-year-old artifacts,”?Tuttle says. “There’s no way the New Madrid earthquakes were a one-time freak event.” The Midwest had been slammed by violent quakes around A.D. 1450 and 900 and 2350 B.C.—and probably more often.
[and from another]
https://www.researchgate.net/figure/Map-showing-the-location-of-the... 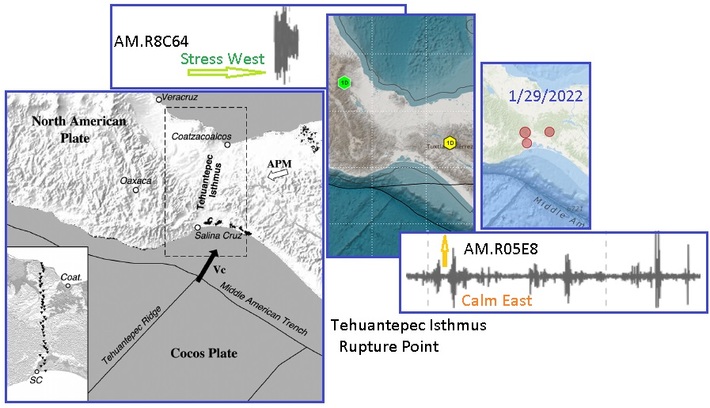 SOZT
We predicted that the New Madrid rupture will be “a huge jolt, with little warning”. History shows that the last adjustment in 1811 had a similar arrival. There was no warning. It was sudden. What would cause the Mainland Portion to suddenly slide to the SW, tearing the New Madrid Fault Line from the tip of Mexico to the mouth of the Seaway? This process is clearly blocked from happening by the solid Cocos Plate, which must likewise move aside or rupture for the Mainland Portion to drop. This rupture point is at the triple juncture where the Tehuantepec Isthmus is located.

To the East of this point the SE Portion of the N American Plate is calm, wrapped around and hooked by the Caribbean Plate, glued to the Africa Plate at the eastern side, and just not inclined to move to the West. To the West of this triple juncture point the Mainland Portion is restless, as the seismographs show. The history of this triple juncture point shows repeated trauma. The Tehuantepec Isthmus shows a mountain range pulled apart, land on both sides eroded so that only a narrow waist remains. History repeats, and 1811 shows that the rupture will likely occur suddenly, with little warning.
EOZT

Prior Prediction 2010: https://www.zetatalk.com/info/tinfx050.htm
For the New Madrid, which will include the European tsunami in its effects, there will be one large jolt with a subsequent and almost immediate tearing of the Atlantic. We have stated that the European tsunami will be the largest, but smaller ones will follow in time. Likewise for the New Madrid adjustment, which involves a tearing of the entire N American continent from the seaway down to Mexico. This adjustment will not occur until minor rock fingers have been steadily broken in a number of places. The areas to be affected have already been experiencing quake swarms, buckling roadways, sinkholes, breaking dams, and unsettling jigging which is unexplained by the authorities. When the primary blockage gives, there will be a huge jolt, with little warning. Aftershocks will continue until the time of the pole shift itself.

Comment by Carlos Villa on January 29, 2022 at 5:07am
Back in Dec 19, 2021 I saw the date of Dec 27 as somehow being important. I told my loved ones that I felt that the 27 is when things would start. On that day, the Permian Basin recorded the biggest earthquake ever in that region. Then someone asked me something about my birthday which is Feb 1 and I immediately saw an image of what looked like a sideways broomstick which I understood to represent the month of February. The first third of the broomstick had a massive hole in it so feb 1 to the 10th. I've had many visions before which have guided me through life but this one was very weird and I'm not sure what it really means as it was very vague. I took this as I had until the 10th of Feb to order any supplies I needed before some kind of hole or interruptions was to make things difficult. This is the first time that I have ever published any of my visions and I hesitated a lot before posting this as I know this site to be a very serious site and what we really should be relying on is what Nancy and the Zetas tell us as anything else is just not reliable.