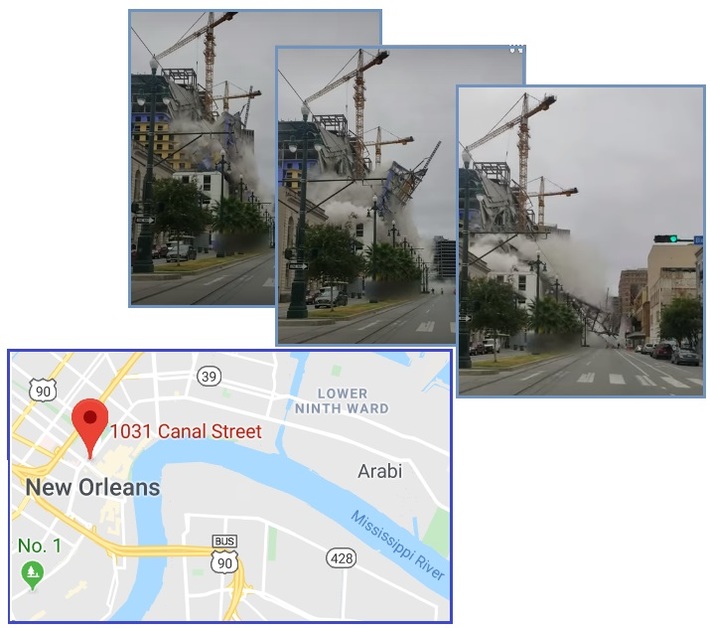 Draft ZetaTalk Newsletter for Sunday October 27, 2019. Newsletters can be found in the Archives by Friday, also. (http://www.zetatalk.com/newsletr/index.htm)

The Zetas predicted that the New Madrid adjustment would start in the soft rock that runs from the southern border of Illinois to the Gulf. They describe the process as unzipping along the Fault Line, from its weakest point where the crust is thin and drooping at the Gulf. This is also the region where the sinkhole at Bayou Corne developed. There are many fault lines that branch from the lower New Madrid, which runs along the Mississippi River. 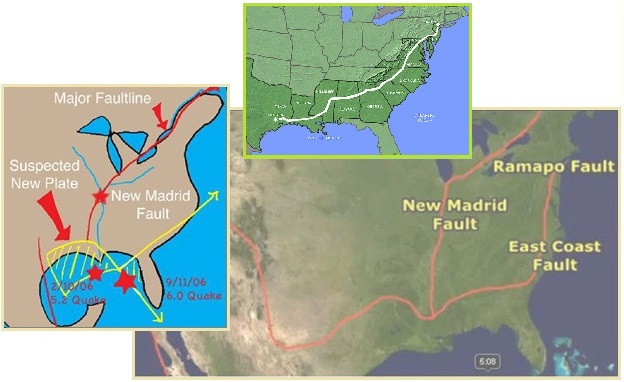 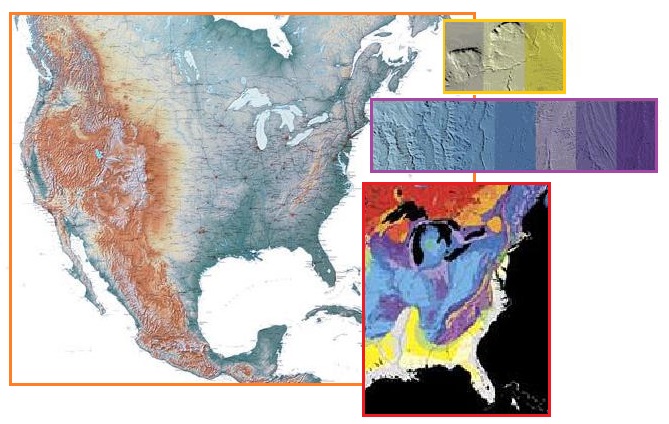 ZetaTalk Prediction 2010: The New Madrid adjustment is most devastating to land to the west of the Mississippi, which will drop slightly in elevation along the river and slide to the SW. 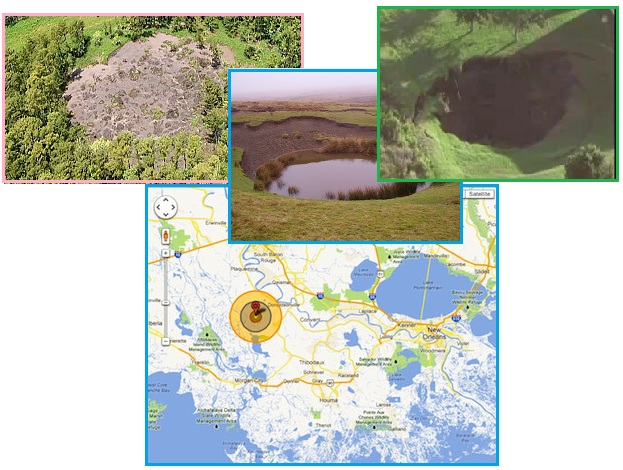 On October 12 the Hard Rock Hotel collapsed, on the west side of the Mississippi river in New Orleans. A video of the collapse shows that the upper deck started collapsing, followed by a swaying crane which was apparently reacting to the collapse, followed by the upper floors sliding toward the street. The media consistently reported that the cause of the collapse was unknown. 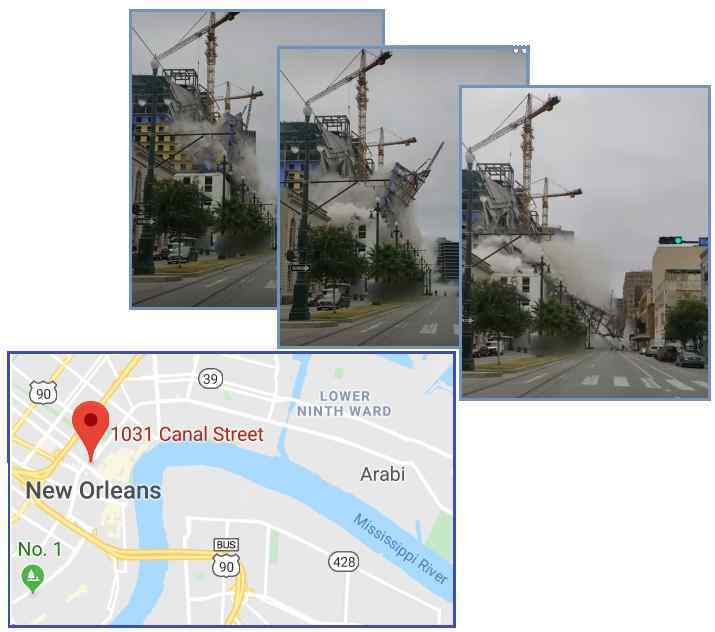 2 People Killed, 1 Trapped Inside Hard Rock Hotel that Partially Collapsed
October 12, 2019
https://abcnews.go.com/US/person-killed-18-hospital-crane-collapses
It's not clear what caused the collapse, which affected the sixth to eighth floors.

Hard Rock Hotel Collapses on Canal Street
October 12, 2019
https://www.wwltv.com/article/news/local/hard-rock-hotel-collapses
Several construction workers had to run to safety on Saturday morning as a large portion of the Hard Rock Hotel, which has been under construction for the last several months, came crashing down suddenly. It was not immediately clear what caused the collapse.

The collapse was quickly followed on the same day - October 12 - by a water main break nearby, also on the west side of the Mississippi River. The S American roll has been relentless lately, forcing the Caribbean Plate to push westward, and by this pushing the tip of Mexico to the west. This intensifies the bow in the N American Continent, which is what will cause the New Madrid Fault Line to slip, ripping the N American Plate in a diagonal manner. The Zetas explain. 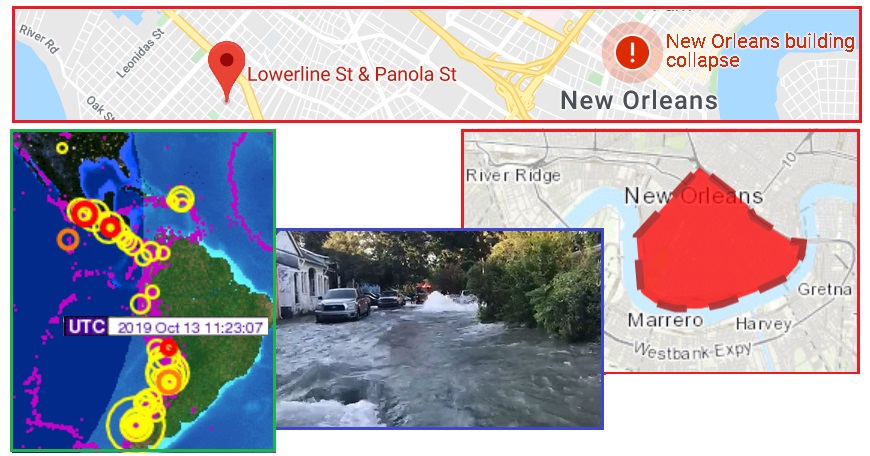 Water Gushes out of Uptown Broken Water Main; Boil Water Advisory Issued
October 12, 2019
https://www.fox8live.com/2019/10/12/water-gushes-out-uptown-broken-...
A 48-inch diameter water main broke near the corner of Lowerline and Panola streets, causing water pressure to fall below 20 psi in the areas bounded by Carrollton Avenue, Interstate 10, the Pontchartrain Expressway, Calliope Street and the Mississippi River. Residents in the affected area are advised to use bottled or boiled tap water to drink, cook, clean food or brush teeth until further notice.

Turkey may be a member of NATO and by this supposedly an ally of the US, but Erdogan was not to be trusted, nor are those who profited by his dictatorship to be trusted. Turkey’s perpetual conflict with the Kurds, who live in northern Syria and have ties to Kurds living in Turkey, is based on the oil and gas resources in the Kurdish lands in Syria. Thus, as soon as President Trump announced a troop withdrawal from Syria, Turkey attacked. Assad of Syria soon rushed to defend the Kurds in Syria.

ZetaTalk Opinion 7/31/2019: Despite being a NATO member, Erdogan and his son have been caught smuggling Syrian oil for ISIS. Where the Kurds are most effective at fighting ISIS, Erdogan tried to eliminate them. Erdogan certainly rigged elections and when a military coup was attempted, survived due to arranged street protests. Dictators always suppress opposition by brutal means. We recently reported that Erdogan damaged oil tankers in the Strait of Hormuz to drive business through his oil pipeline to Europe. He had naked ambitions to recreate the Ottoman Empire, flooding refugees into Europe. Erdogan was a double dealer, a NATO member buying weapons from Russia, playing whatever side was advantageous for him. 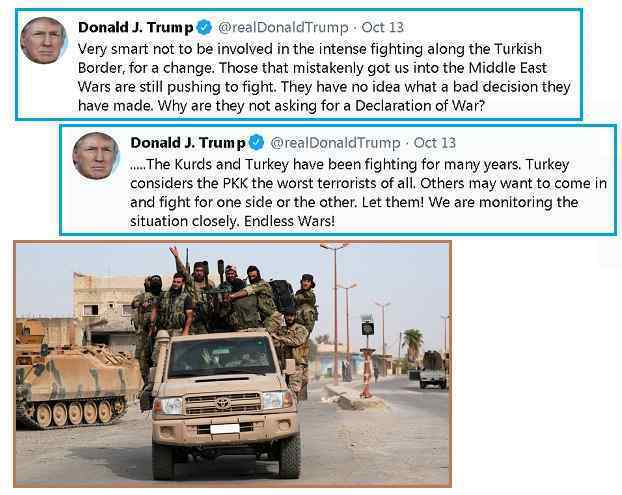 Erdogan says Turkey will Not Back Down from Syria Offensive
October 14, 2019
https://www.reuters.com/article/syria-security-turkey-erdogan/erdog...
Turkey will not back down from its offensive against Kurdish fighters in northeastern Syria “no matter what anyone says”, President Tayyip Erdogan said, adding that the battle would continue until “ultimate victory” is achieved. He also slammed the European Union and Arab League for their criticism of Turkey’s operation and asked for international funds for Ankara’s “safe zone” plans in northeast Syria.

US Troops ‘Leave’ Kobani as Turkish Incursion Advances and Kurds make Deal with Damascus
October 14, 2019
https://www.rt.com/news/470871-us-troops-pullout-kobani-turkey-dama...
The Kurdish-led administration in northern Syria said it had reached an agreement with Damascus for Syrian government troops to be deployed along the border with Turkey. With the Syrian Army on the move, pressure is mounting on Turkey. The Syrian government is going to try to go across and get the oilfields. They also want to take control over prime agricultural land and the Tabqa Dam, which the Americans and the Kurds have held. Ankara’s move has been condemned internationally, and several Western countries have halted their military supplies to Turkey in retaliation.

But wait! Didn’t Erdogan have a fatal heart attack last July? After several days, a Double appeared at that time, identified by several “tells”. 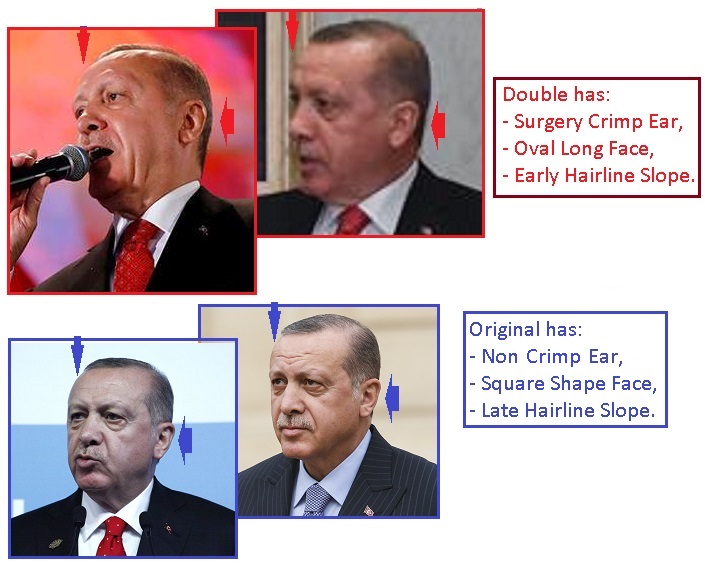 ZetaTalk Confirmation 7/31/2019: Is Erdogan dead? Yes, but Turkey is reluctant to admit this. A dictator is always surrounded by those who benefit from his iron grip, and they do not want their control and influence to be lost. They are seeking a double, and although many have been lined up in the past, at the ready, none are perfect. There is always a “tell”, a clue. Erdogan had many enemies, both within and without Turkey.

Thus it was the Double who came to confer with President Trump in October. From US politicians to the European Union to NATO members and throughout the Middle East, Turkey’s attack on the Kurds was condemned, with sanctions threatened. Turkey countered by threatening to pour refugees into Europe or release ISIS prisoners, or perhaps confiscate the NATO nukes kept at the US air base in Turkey. Now what? 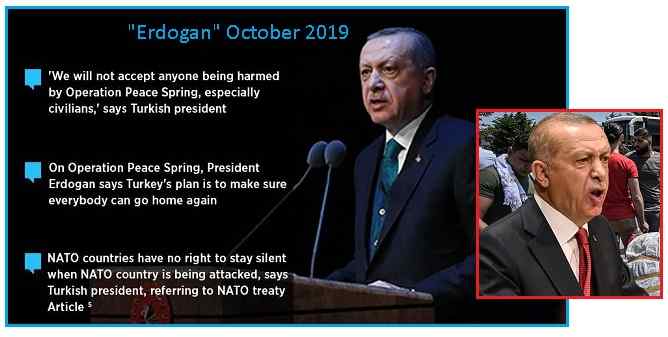 Pentagon to ‘Press NATO Allies to Sanction Turkey’ over Syrian Op, Blames Erdogan for Potential ‘War Crimes & ISIS Resurgence’
October 14, 2010
https://www.rt.com/news/470932-pentagon-nato-turkey-isis/
Turkey’s operation in northeast Syria has “undermined” the US-led campaign against Islamic State terrorists, the Pentagon has claimed, warning that Washington will be “pressing” their NATO allies to sanction Ankara. Germany and France have already halted weapons sales to the country, and it’s unlikely other members of the alliance will defy Washington's “pressure.”

Merkel Tells Erdogan to Immediately Stop Syrian Op – but why Should he Care what Europe Says?
October 13, 2019
https://www.rt.com/news/470862-merkel-erdogan-syria-refugees/
Merkel demanded that Erdogan bring his military operation against Kurdish militias in northern Syria to an “immediate end”. Merkel’s admonishment comes as EU leaders prepare to meet in Luxembourg this week to plot a joint response to Erdogan’s ‘Operation Peace Spring’. It also comes after Germany, France, Norway and the Netherlands suspended arms sales to Ankara and across the Atlantic US President Donald Trump threatened to hit the Turkish economy with “powerful sanctions.”

Trump Followed His Gut on Syria. Calamity Came Fast
October 14, 2019
https://www.nytimes.com/2019/10/14/world/middleeast/trump-turkey-sy...
State and Energy Department officials were quietly reviewing plans for evacuating roughly 50 tactical nuclear weapons that the United States had long stored, under American control, at Incirlik Air Base in Turkey, about 250 miles from the Syrian border. To fly them out of Incirlik would be to mark the de facto end of the Turkish-American alliance.

ZetaTalk Prediction 10/31/2019: Since his fatal heart attack last July, Erdogan has not been leading Turkey, but the group surrounding him when he was in power has taken his place. It was the Double who met with Trump recently. President Trump is pulling the US troops scattered around the world back home, anticipating the New Madrid adjustment and the domino effect that will run up along the San Andreas. As we stated early in the ZetaTalk saga, the troops will be needed back home. The mission in Iraq, to defeat ISIS, was accomplished.

As will be inevitable when the Pole Shift occurs, each country must deal with its neighbors. The Kurds, in northern Syria, have already allied with Assad of Syria and by extension with Russia, who is an ally of Assad. The region the Kurds occupy in northern Syria, is where the oil and gas deposits lie. Will Turkey succeed in invading this region and seizing these assets? The West will impose sanctions, and likely kick Turkey out of NATO. This will involve removing the nukes the US stored at Incirlik Air Base. But temper tantrums by the dictators in control of Turkey are unlikely to end soon.

PG&E opted to face public wrath for cutting power in Northern California to avoid being sued for damages from potential fires that might emerge during an onslaught of Diablo winds. The winds came and went, but it was not PG&E territory in Northern California that burned, it was Southern California. Per the Zetas, until Nibiru is admitted, the heat from subduction of the Pacific plates under California will be blamed on the wrong factors. 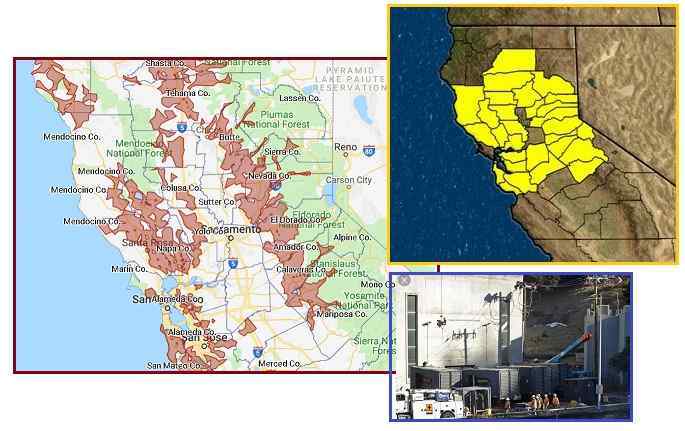 PG&E Cut Power for Hundreds of Thousands in Northern California
October 9, 2019
https://www-m.cnn.com/2019/10/09/us/pge-power-outage
In an attempt to avoid sparking a wildfire, California's largest utility intentionally cut power to hundreds of thousands of customers, and power isn't likely to be restored for days. Diablo winds sweeping across arid Northern California "historically are the events that cause the most destructive wildfires in California history," said PG&E meteorologist Scott Strenfel. San Jose Mayor Sam Liccardo urged residents to prepare to be without power for as long as seven days. 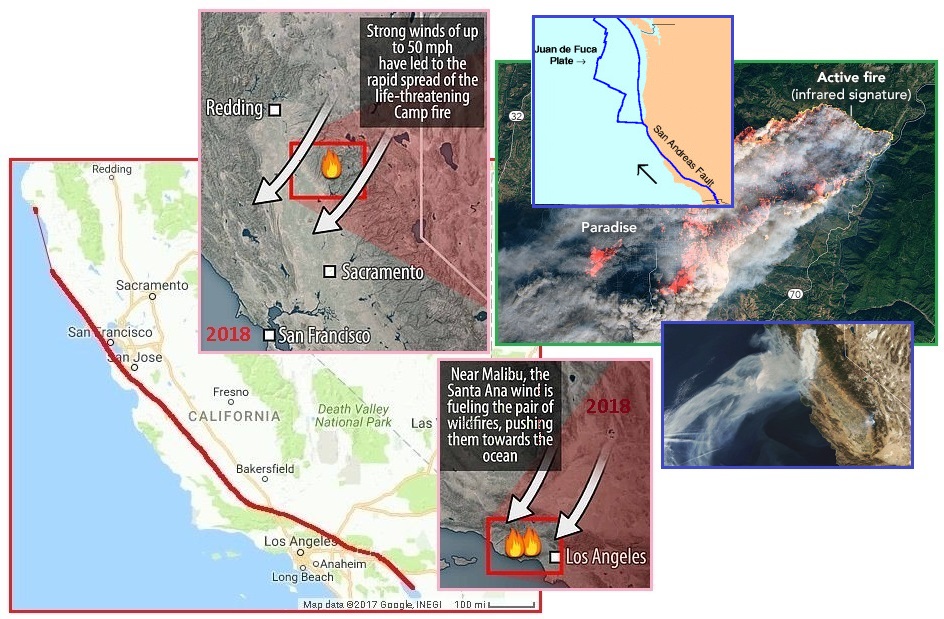 ZetaTalk Prediction 10/31/2019: The pattern for California wildfires in 2018 showed they occurred along the San Andreas Fault Line during the Carr Fire in July due to tension along the fault line caused by the tightening of the N American bow. Then again in Paradise in October due to heat from plate subduction. The ground in both cases was hot to the melting point due to heat from pressure and friction. Hot and melting Earth is legend in some parts of the globe during prior Pole Shifts, and the West Coast of the US is one such locale.

PG&E was blamed for the Paradise fire, and forced to pay a huge fine. Thus it should not be a surprise that PG&E is taking defensive steps to avoid such lawsuits in the future. Nibiru and the 7 of 10 Plate Movements were at fault for both these 2018 fires. But since Nibiru is at present a forbidden word, its presence and pending passage not admitted by the authorities, PG&E anticipates being blamed for all future 2019 fires, and thus is taking every possible step to appear blame free.

Hot dry Diablo winds, the Santa Anna winds coming from the East, are notorious for encouraging dry underbrush to burn. This is the primary excuse being used by PG&E, but they are monitoring other factors and are likely to repeat blackouts whenever hot Earth is detected. Anticipate fires springing up in the blackout regions, even during the blackouts. Until Nibiru is admitted, the blame will shift from PG&E to the usual suspects – arson, camp fires, tossed cigarettes, or lightning strikes.

Nibiru, and the letter Q were clearly visible and included in the photo shots of Dunford’s farewell. In the mirror image, one sees both Nibiru at the 4 o’clock position and the letter Q. 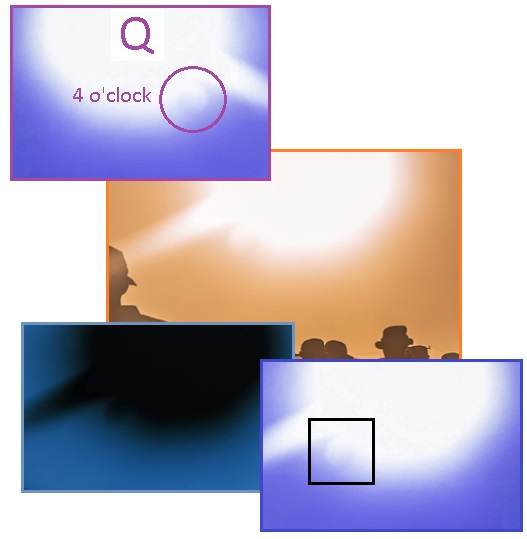 Nibiru has been shown in photos by Eric Trump in March and April of 2018 and during a President Trump salute by the Blue Angels in May of 2018. 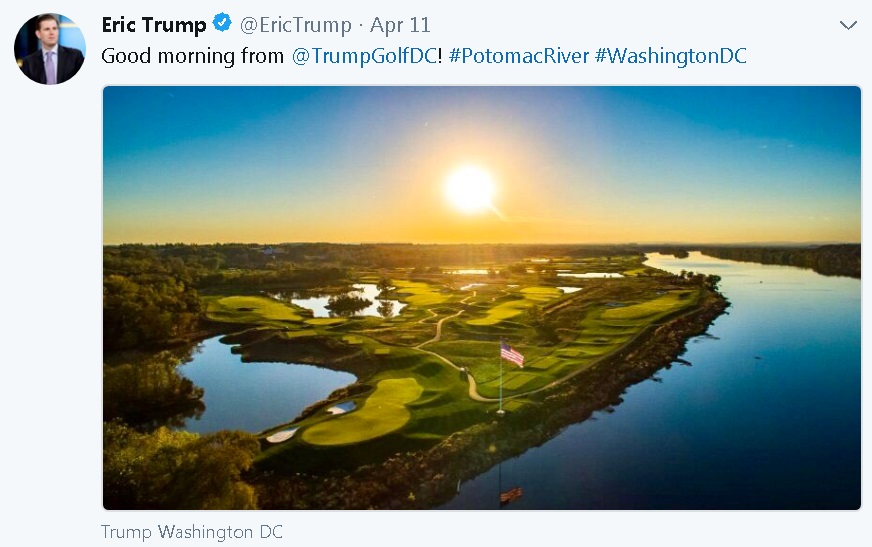 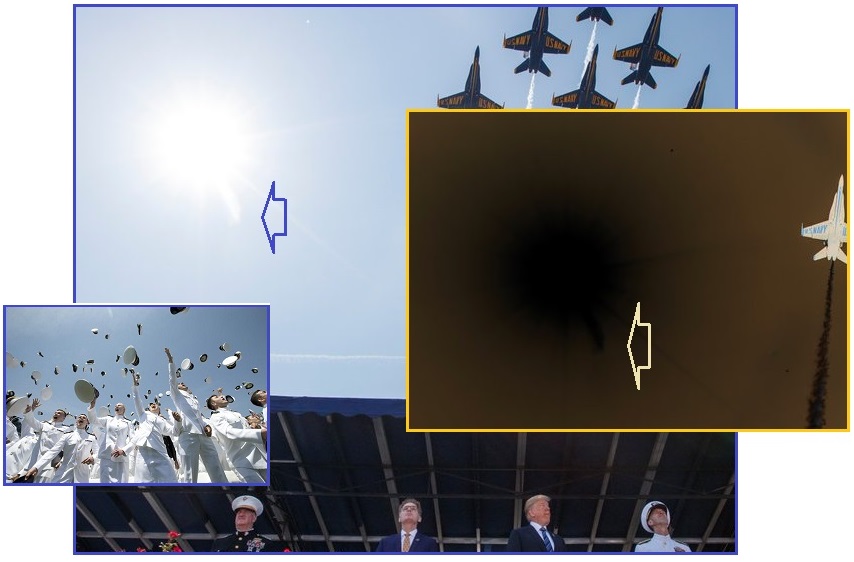 The public is capturing Nibiru on film regularly these days, as the blog on the Pole Shift ning dedicated to these photos shows. Reddit reports two Sun’s rising over Cincinnati on October 1. And Alberto, using various filters to enhance light in the red spectrum, is capturing a huge dust shrouded Nibiru complex these days. 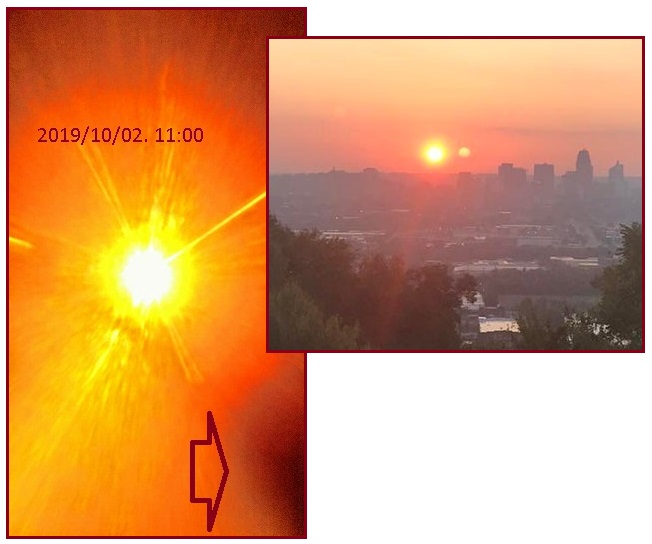