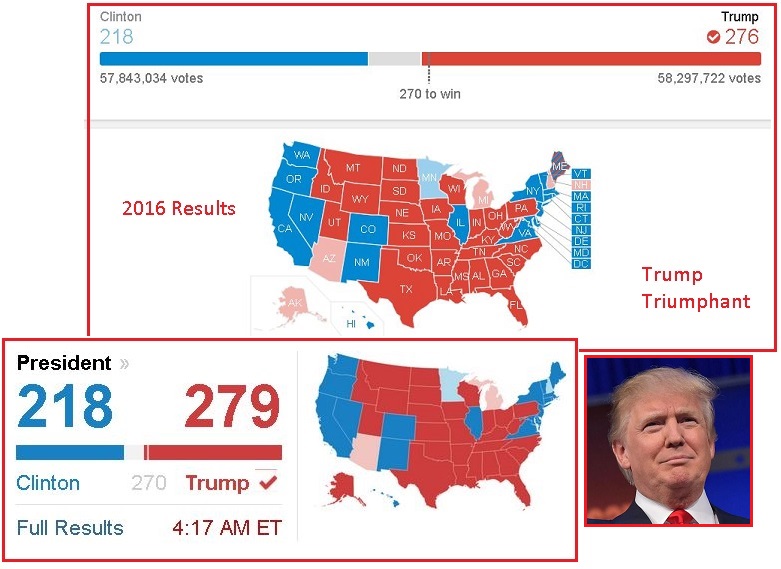 Draft newsletter for Sunday November 13, 2016. Newsletters can be found in the archives by Friday. http://www.zetatalk.com/newsletr/index.htm

In a stunning counter to all the pundit and pollster predictions that Hillary would win, The Donald pulled it off, topping 279 electoral votes when Hillary was still struggling at 218. Later Michigan and Arizona joined his win, raising this electoral count, and Hillary was still short though finally winning New Hampshire and Minnesota. Shortly after midnight on November 9, the day after election, Trump declared victory. Per the Zetas, a team composed of human and aliens, the forces for good, countered the election fraud that had been set in place.

Trump Triumphs over Clinton in Stunning White House Upset
November 9, 2016
http://www.unionleader.com/voters-first/obama-clinton-call-on-natio...
At 70, Trump will be the oldest first-term U.S.  president.

ZetaTalk Explanation 11/12/2016:
http://www.zetatalk.com/ning/12oc2016.htm
Nancy has been assailed with queries from those anxious about the 2016 election, but she was deliberately kept out of the loop to retain the element of surprise. The GEMS vote collection machines had been shown to be able to be programed to alter the election results in the states where GEMS is used. Democratic election workers in Florida were caught filling out absentee ballots for Hillary. Electronic voting machines refused to register a vote for Trump. The polls were skewed for Hillary by mixing in too many Democrats, so the public would not be shocked when Hillary stole the election. And major media outlets like CNN and NBC were declaring that Hillary would win by 315 electoral votes.

Where we warned, several months ago, that the Council of Worlds would give Dunford cover so he could cancel the 2016 elections, creating any number of violent Earth changes that would make it impossible for the US public to go to the polls, this did not prove necessary. No severe wobble,
http://www.zetatalk.com/newsletr/issue518.htm
although a minor wobble in August
http://zetatalk.com/ning/10sp2016.htm
showed what was possible. No New Madrid rupture, though the N American continent is over ripe
http://www.zetatalk.com/newsletr/issue520.htm
for this to start. No electro-magnetic pulse or blackouts, though NASA was warning that a CME might arrive
http://www.thebigwobble.org/2016/11/coronal-mass-ejection-cme-to-hi...
on Earth on election day, causing havoc.

Where the Bush crowd stole the election for Bush in 2000 and 2004 via election fraud, using the Diebold paperless voting machines, this was countered in 2006 and 2008 by the forces for good. We promised to describe the techniques
http://www.zetatalk.com/index/zeta337.htm
after the 2006 election and the techniques were extensive. Of course they included human and alien hands, working as a team. In2016, we, the Zetas, teleport a human into a control room, freeze all others in the room, and reset the GEMS program set to steal votes for Hillary. We, the Zetas, inform human teammates on where wifi vote swapping was to occur and if the perpetrators were not stopped, wifi static was used. This is a partial overview of the techniques used in 2016.

Voter fraud was intended, just as had occurred for Bush in 2000 and 2004. The polls were rigged to include too many Democrats, selecting the mix until they were reporting that Hillary was ahead. This was to prepare the public for the election results. Well, it’s what the polls predicted! Even the famous Nat Silver of the 538 website was taken in by the fraudulent polls, predicting that Hillary would win. 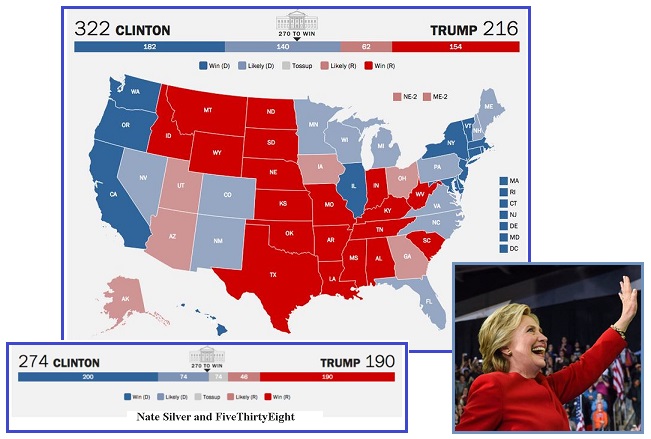 Meanwhile, there were lots of signs that vote rigging was in place. Pennsylvania voting machines refused to allow a Trump vote,
http://www.infowars.com/video-machine-refuses-to-allow-vote-for-tru...
Bev Harris of BlackBoxVoting showed how the GEMS software used by many states to collect and count the votes could set percentages
http://www.anonymousconservative.com/blog/trump-may-be-right-the-el...
for the win, in Broward County Florida election officials were caught changing absentee ballots http://insider.foxnews.com/2016/11/02/broward-county-voter-fraud-fl...
for Hillary. All election fraud was done by the Democrats, for Hillary, though in 2002 and 2004 it was the Republicans who were the fraudsters. So certain where the fraudsters that they would win, Newsweek even had a Commemorative Edition prepared. Biggest Election Fraud in History Discovered in the United States
November 1, 2016
http://www.infowars.com/biggest-election-fraud-in-history-discovere...
Bev Harris, at blackboxvoting.org, is exploring a specific “cheat sheet” that has vast implications. This tampering is not visible to election observers, even if they are standing in the room and watching the computer. Use of the decimalized vote feature is unlikely to be detected by auditing or canvass procedures, and can be applied across large jurisdictions in less than 60 seconds. GEMS vote-counting systems are and have been operated under five trade names: Global Election Systems, Diebold Election Systems, Premier Election Systems, Dominion Voting Systems, and Election Systems & Software, in addition to a number of private regional subcontractors. Each state government appoints a “consultant” to manage GEMS on election night. That person would be capable of rigging the vote.

FL GOP Accuses Election Officials of Opening Mail-In Ballots
November 2, 2015
http://insider.foxnews.com/2016/11/02/broward-county-voter-fraud-fl...
The state GOP alleges that officials in Broward County, which includes Fort Lauderdale, have been opening tens of thousands of vote-by-mail ballots prior to them being cleared for counting. While denying she has any health issues, Hillary apparently sustained a broken cheekbone. Did someone smack her around? Did she get drunk and smash into a wall? None of the above, per the Zetas. They say during her 6 day drug holiday just ahead of the 3rd debate, while put into a coma so she could be taken off Parkinson drugs and MS steroids and have the water from heart failure squeezed out of her, she awakened just enough to thrash around. 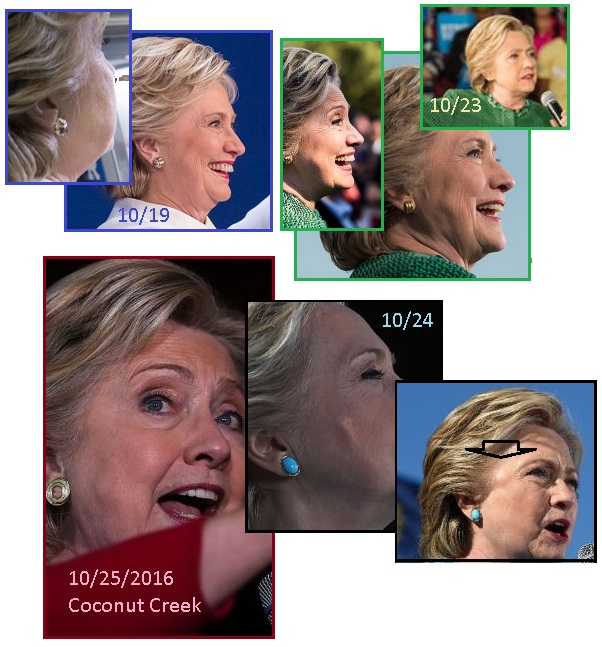 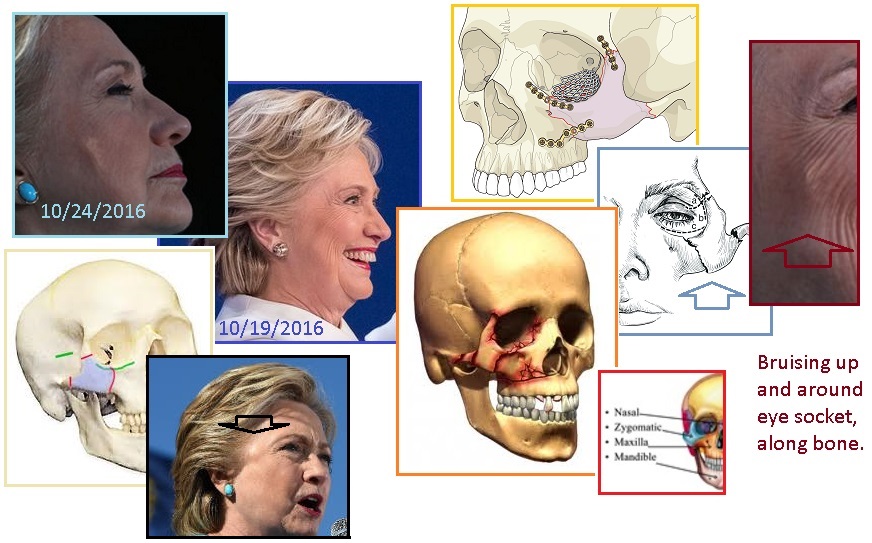 ZetaTalk Confirmation 10/29/2016:
http://www.zetatalk.com/ning/29oc2016.htm
Hillary incurred a broken cheekbone, the Zygomatic, during her 6 day drug holiday prior to the 3rd debate. During these days when she is removed from the MS and Parkinson drugs, so they can be fully effective when she returns to them, she is literally in a coma. Should she awaken in a daze and move about, her MS would have returned as well as her Parkinson’s. Unsteady on her feet, and prone to seizures at these moments, she thrashed about and bumped her face. The bruising mended during her 6 day absence, so this was not noticeable except for a Zygomatic bone protrusion during the debate. It stuck out just above the jawbone.

Fearing the shattered cheekbone would drift further and be questioned by the public, the campaign had microsurgery performed just prior to her campaign appearances on October 24th. This surgery does not leave an incision, as it is done through the scalp, under the skin, and involves attaching a titanium chain to both the cheekbone and the jawbone. That the cheekbone is being pushed up can be seen in photos on October 24th, with the top part of the bone now bulging out at her temple. In that Drudge brought so much attention to this surgery with a front page photo and article, the campaign removed the titanium chain, and Hillary went back to having a bulge just above her jawbone.

The Podesta email dump reveals bizarre occult practices such as Podesta being invited to a Spirit Cooking
http://www.infowars.com/hillary-tied-to-bizarre-occult-spirit-cooki...
ritual that often includes menstrual blood and milk of semen, alleged Clinton Voodoo
http://www.infowars.com/insider-clintons-caught-conducting-voodoo/
practices in Haiti, pictures of nude teenagers in suburban settings hung throughout Podesta’s home, a picture depicting cannibalism hung behind Podesta in his office, and reports that Hillary attended a witch’s church in LA during Bill’s presidency. 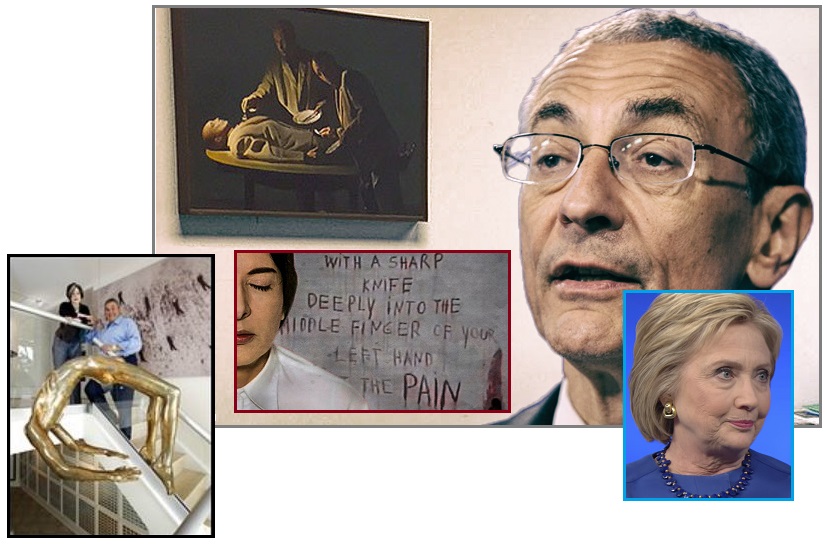 Married, with Art
September 22, 2004
http://www.washingtonpost.com/wp-dyn/articles/A43480-2004Sep22_3.html
Folks attending a house tour in the Lake Barcroft neighborhood in Falls Church earlier this year got an eyeful when they walked into a bedroom at the Podesta residence hung with multiple color pictures by Katy Grannan, a photographer known for documentary-style pictures of naked teenagers in their parents' suburban homes.

Flashback: Hillary Labeled ‘High Priest,’ ‘Goddess of Occult’ in Guccifer Letter
November 4, 2016
http://www.infowars.com/flashback-hillary-labeled-high-priest-godde...
Democrat presidential candidate Hillary Clinton was dubbed a “high priest” and a “goddess of the occult” in a letter recently sent from Romanian hacker Guccifer to Fox News. The letter is receiving renewed scrutiny following revelations Friday that Clinton campaign chairman John Podesta attends bizarre occult rituals involving a mixture of breast milk, blood and semen in what is being termed the most disturbing email exposed by Wikileaks.

Art Depicting Cannibalism Hangs in Podesta’s Campaign Office
November 4, 2016
http://www.infowars.com/art-depicting-cannibalism-hangs-in-podestas...
On the wall in his office at Hillary Clinton’s Brooklyn headquarters, campaign chairman John Podesta has an oil painting on loan from his lobbyist brother, who is an avid art collector. The image shows two men hunched over a dining room table, bearing knives and forks. On the table lays a man in a suit, who looks vaguely like Podesta.

There are also several emails
https://wikileaks.org/podesta-emails/emailid/39999
with an attachment showing Podesta holding his hands up so that 14 and a fish are shown in his palms. The symbolism is obscure,
http://www.godlikeproductions.com/forum1/message3347218/pg1
but might relate to the Egyptian Osiris mythology, wherein Osiris rival Set chops him up into 14 pieces, but Osiris is later reassembled except for his penis which had been eaten by a fish.  The emails are also sent by a special assistant to Hillary named “Fisher”. 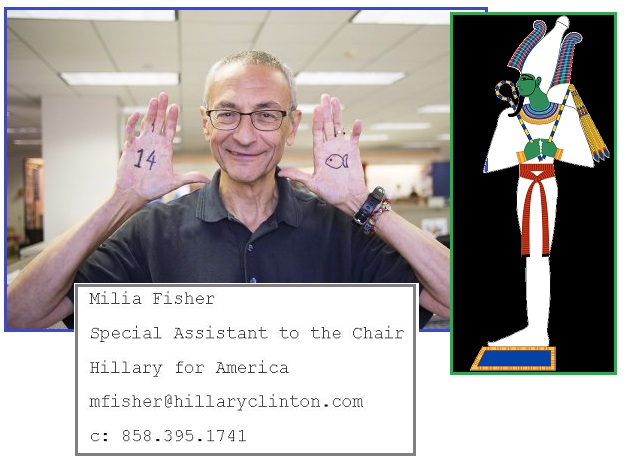 Osiris
https://en.wikipedia.org/wiki/Osiris
Osiris was an Egyptian god, usually identified as the god of the afterlife, the underworld, and the dead, but more appropriately as the god of transition, resurrection, and regeneration. The part of the myth recounting the chopping up of the body into 14 pieces by Set is attested to be a part of the rituals by a version of the Papyrus Jumilhac, in which it took Isis 12 days to reassemble the pieces, coinciding with the festival of ploughing.

Per the Zetas, such rituals and satanic practices do not deliver the goods. But those who seek to harm others do deliver their souls, and on Judgement Day off they go to a prison planet to live with others of their kind.

ZetaTalk Insight 7/15/1995:
http://www.zetatalk.com/call/c19.htm
Invoking the dark forces through magical incantations has been part of man's history from the start, for as long as entities incarnated into human form have been giving The Call to the Service-to-Self. The desire for revenge, to eliminate a rival, to steal from another, to increase personal power at the expense of others - all these desires are such a call. The magical incantation or rituals such as pentagrams on the floor have nothing to do with The Call being given or answered, but practices that set the mood do. The humans are indeed giving their souls away as they are joining the Service-to-Self orientation, where control and captivity are an everyday reality. Can the demons invoked deliver? No. All actions on Earth are due to humans, so rewards can only come from humans.

What would the skies look like if chemtrailing were not fogging them up? This was the question raised recently when a UFO was filmed disbursing a chemtrail.
https://youtu.be/fIMy5Q0BXEE
Poof. Gone. 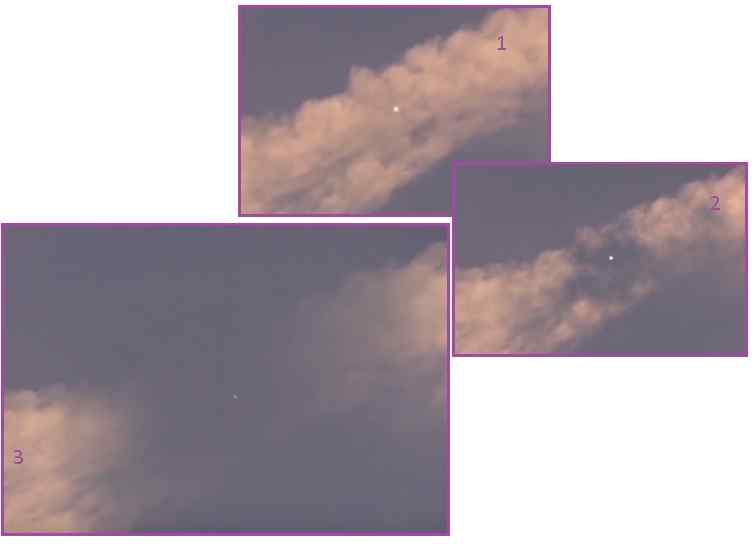 ZetaTalk Comment 10/29/2016:
http://www.zetatalk.com/ning/29oc2015.htm
This is a valid video, and indeed a UFO disbursing chemtrails. This demonstration was done for several reasons. One was to register support for the public who had been furious about having their view of Nibiru blocked, lo these many years. The second was to show the public that the chemtrail haze could be disbursed in an instant by UFO’s. The Council of Worlds wants the public to be aware of the presence of Nibiru, and the pending passage, so they can make their spiritual choices, take action, prior to potentially dying in the Pole Shift. What would worldwide visibility of Nibiru bring, if suddenly made possible?

Visibility is steadily increasing, naked eye without filters. This can be seen in a photo snapped at Horricon Marsh, Wisconsin on October 9, 2016. The photographer reports that no special filters or special camera were used, just the iPhone. No chemtrails were in sight. 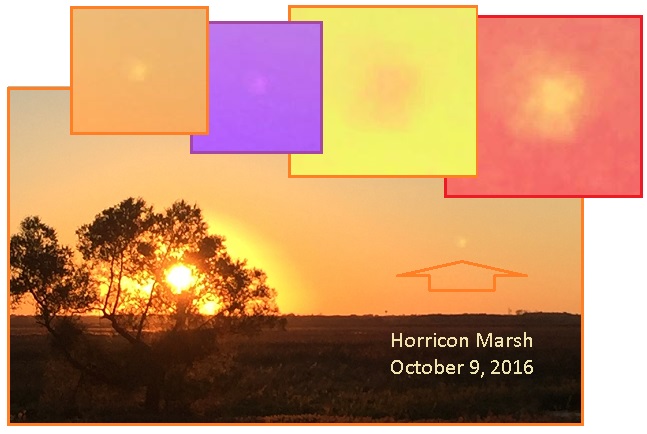 When filters are used, one can see that Nibiru has drawn closer,
http://poleshift.ning.com/profiles/blogs/2016-11-06-16-24
pointing its trashy tail directly at us in a blast of debris. Nibiru can be determined to be closer, because it is LARGER than when seen in prior photos from past years, and it is discernable even when shrouded by its close hugging dust cloud.