Why is the cover-up loosening? - Cover-up; from ZetaTalk 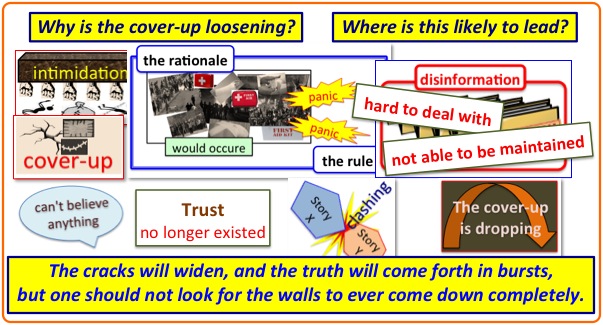 For my understanding I made a chart from "ZetaTalk: Cover-Up" shown below. 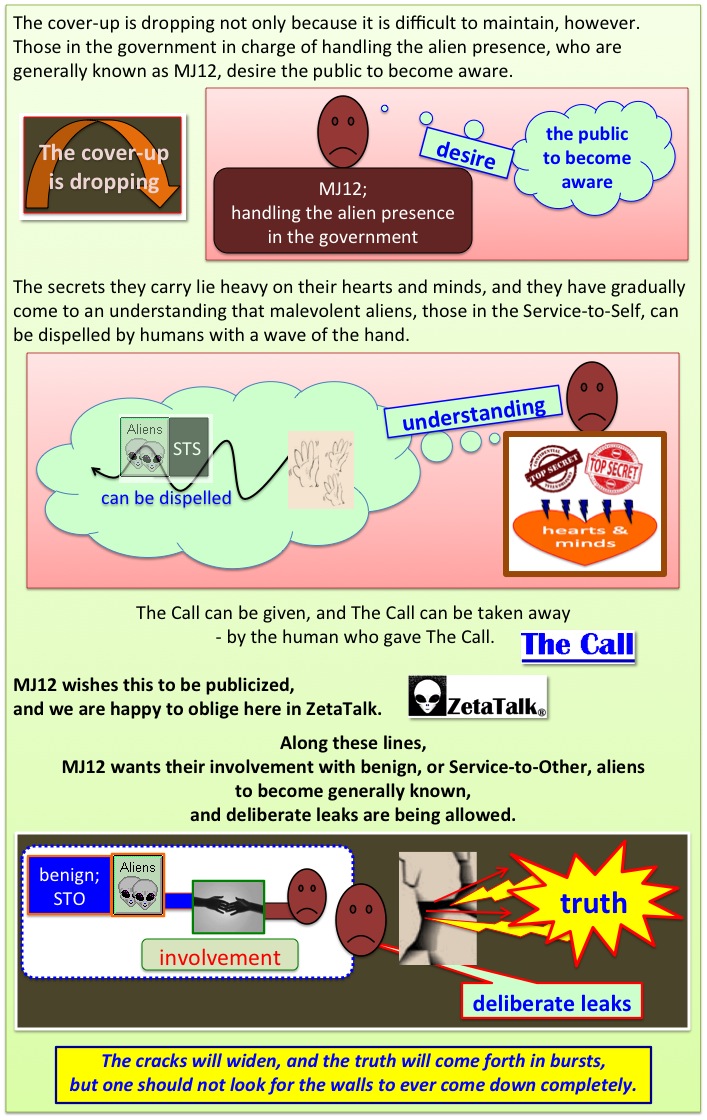 The story of the government cover-up, how it came to be due to fear of frightening the masses and losing stature in the eyes of the electorate, and how it has been slipping of late, loosening, and deliberately so, is so well known that we will not bother to repeat all the details here. Rather, we will discuss why the cover-up is loosening, and where this is likely to lead.

Cracks began to appear in the cover-up early on, but were mended by intimidation. This took the form not only of threats and beratement, but physical harm, to person and property, and even death. The rationale was that so much more injury and devastation would occur, were the populace to panic, that this was justified. For decades this was the rule, with active disinformation to smooth the edges. Over time, the amount of disinformation increased, until the whole situation became awkward and, quite frankly, untenable. Disinformation is a tool designed to deal with short term or delimited affairs. With the alien presence, which has been dragging on and most certainly will not go away, the disinformation spread about began to be more of a problem than the rumors of the alien presence. Why was the government doing this? What did they have to hide? Can we trust them at all? Trust went out the window, and the public has become too cynical to believe anything that comes from government spokespersons. Added to that is the dilemma that the cover-up crowd is increasingly facing, that being that their stories are beginning to meet each other, and clashing. Oops. Now what?

The cover-up is dropping not only because it is difficult to maintain, however. Those in the government in charge of handling the alien presence, who are generally known as MJ12, desire the public to become aware. The secrets they carry lie heavy on their hearts and minds, and they have gradually come to an understanding that malevolent aliens, those in the Service-to-Self, can be dispelled by humans with a wave of the hand. The Call can be given, and The Call can be taken away - by the human who gave The Call. MJ12 wishes this to be publicized, and we are happy to oblige here in ZetaTalk. Along these lines, MJ12 wants their involvement with benign, or Service-to-Other, aliens to become generally known, and deliberate leaks are being allowed. The cracks will widen, and the truth will come forth in bursts, but one should not look for the walls to ever come down completely.