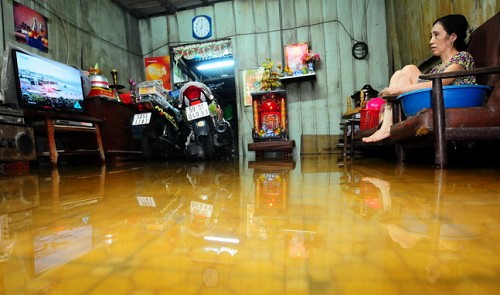 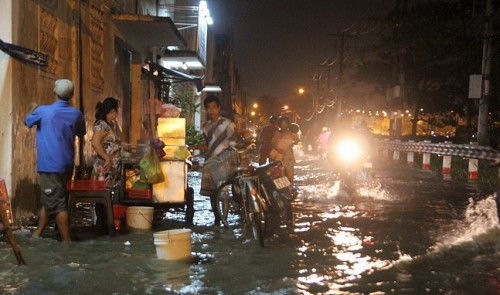 After reaching 1.64 meters on Sunday, the height of the Saigon River continued to increase to 1.68 meters on Monday, continuing to flood many areas in Ho Chi Minh City, the Southern Hydro-meteorological Station reported.

Yesterday’s water level is abnormal and is a record high for the past 61 years. Concerned agencies are trying to explain the phenomenon, said Nguyen Minh Giam, deputy director of the Station.

On the evening of October 21, floodwater on Huynh Tan Phat Street in District 2 rose to half of the wheel of a motorbike, causing many vehicles to break down and blocking traffic in the area.

Many residents living near the An Phu Dong, District 12, had to use bags of sand to prevent water from entering their house from the flooded streets outside.

By yesterday afternoon, numerous houses in Ward 5, Go Vap District, along the Vam Thuat River, a small branch of the Saigon River, had to use tools to remove water from their submerged houses.

The same inundation was seen in many low-lying areas in the city, despite the embankments that have been built in many of these areas, causing much disturbance to locals.

Flood waters have overflowed many embankment systems in the Binh Trieu area in Thu Duc District and other areas in District 2, said Do Tan Long, head of the city’s Anti-Flooding Program Operating Center.

The current embankments can prevent flooding if the water level is less than 1.6 meters high, he added.