The derailment was near Highway 29 and Prairie Road, south of Carlos. More than 10 cars were involved. There were no injuries and no public safety issues, according to Andy Cummings, CP manager of media relations.

There were two crewpersons on board the train when it derailed. Cummings said the train was carrying grain and potash and that CP immediately dispatched teams to the site. The cause of the derailment is not known at this time and is under investigation, said Cummings.

Deputies from the Douglas County Sheriff's Office were on scene, helping with traffic control. Roads around the derailment were closed.

No further information was available at this time. The Ohio State Highway Patrol said the train derailed around 4:50 p.m. near Fairground Road along U.S. 23 just north of Lucasville.

Norfolk Southern Corporation said the train was traveling east to Linwood, North Carolina. when it derailed near Waverly. An estimated 13 cars derailed with three or four on their sides. Some cars that derailed were transporting grain and had some material spill alongside the tracks.

"Norfolk Southern has personnel on the scene to begin recovery efforts. Norfolk Southern personnel are working closely with local first responders to secure the scene, and the safety of our employees, emergency responders, and the community is our top priority," the company said in a statement.

U.S. 23 was closed in the area of the scene as a precaution but has since reopened.

There are no reported injuries. 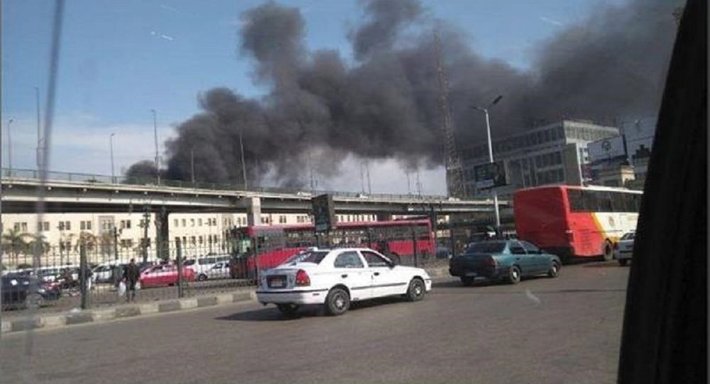 The train went off the rails and caught fire near the Ramses station in the Egypt capital, according to the portal Masravi.

According to preliminary information, the train left the depot and was travelling at a high speed when it slammed into a covered platform. The collision caused a fiery explosion; the inferno spread to one of the buildings at Ramses Station.

28 people were killed and more than 50 injured in a Cairo train fire, according to a source in Egypt's Health Ministry. The state TV reported that 20 people have been killed and 40 others wounded. The death toll could be much higher. According to other sources the death toll may be less.

Preliminary data suggests that the engineer of the train that caught fire at the central Ramses Station in Cairo might have lost control of the machine, resulting in it colliding with some kind of barrier, and killing and injuring dozens, a source in the Egyptian Transport Ministry told Sputnik on Wednesday.

"As a result [of the collision], a fire started in the train, which immediately spread to the first wagon with a fuel pod and then to the passenger cars," the source said.

People reportedly suffered carbon monoxide poisoning as they couldn't leave the platform and the station during the panic.

Security officials have partially closed the entrances of the train station, according to Ahram Online news portal.

Ambulances and firefighters are at the scene.

The central train station in Cairo has been evacuated, the rail services near the station have been temporarily suspended. 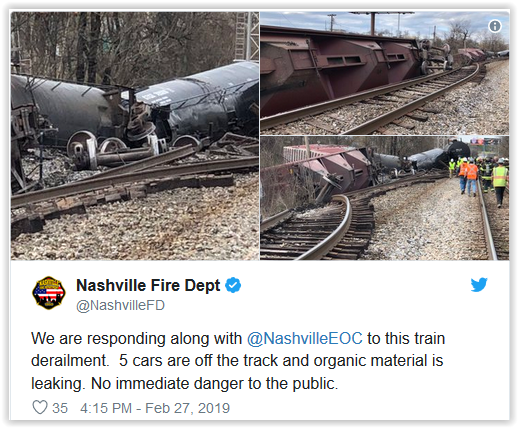 NASHVILLE, Tenn. — A train has derailed in Nashville, prompting evacuations of nearby buildings and businesses.

At least five trucks derailed, some completely overturned off the tracks and two of which spilled their contents of soybean oil and barley. The crash presented no danger to community, but crossings are blocked.

A Nashville Fire Department official said they are working to keep the oil from continuing to spill. The cause of the crash is unknown and is under investigation.

Berry Hill Police Department officials said even though the train was not carrying flammable materials, they evacuated surrounding buildings including a Goodwill and the Berry Hill Post Office.

A total about about 50 people were forced out of the area.

Berry Road is shut down and crossings will be blocked until CSX deems it safe to pass.

Train derails in Berry Hill, six cars off the track Six train cars left the track on Wednesday afternoon in Berry Hill, according to CSX.

Video captured by Sadie Gerbe captured a wheel jumping up and dust flying from a train as it went by the railroad crossing.

Gerbe saw it happen as she waited on Craighead Street.

What really alarmed her was watching the video back and seeing sparks underneath one of the train cars.

"I was glad I was safe. That was crazy. I'm glad it didn't happen right there where I was," Gerbe said.

Surveillance video from a nearby business gave a better look at the train went off the tracks. You could see workers walking over to where it stopped derailing six train cars.

CSX told News4 the train was on its way to Waycross, Georgia, which is almost 500 miles from Nashville

"I always remembered going into the little post office right here and it's right on the railroad tracks. The train would go by and I thought 'wow, if one ever did derail right here, this would all be wiped out,'" Linda Pettibone who used to work nearby said.

Pettibone wanted to see it for herself.

Video from Drone4 captured the soybean oil and barley spilled on the ground and ripped up railroad tracks.

As for Gerbe, a drive to work will never be the same when she's stopped at a crossing.

"A lot of times there's nice art on the trains. So, I take pictures or take a video of it. I didn't think I'd take a video like that," Gerbe said.

The cause of the derailment is under investigation. There was serious damage to the tracks and it is unknown when it will reopen. 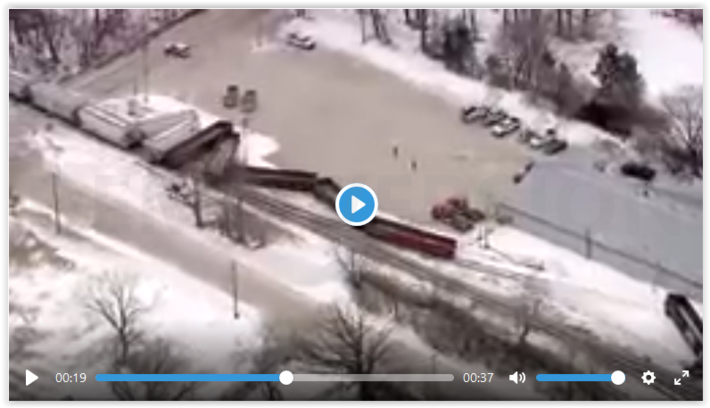 No injuries have been reported . Spring Grove police said 13 empty cars derailed.
LIVE TRAFFIC: Check out the latest conditions on the ABC7 Traffic Map
The derailment has led to Blivin Street to be blocked between Main Street and U.S. 12 because of the derailment. Blivin is expected to be closed for most of the day. WESSINGTON, S.D. - A train derailed on Thursday in Wessington in central South Dakota.

KELOLAND News has reached out to authorities for more information but haven't received any details.

A viewer sent drone footage of the damage.

There are no injuries reported and no leaks detected, according to KFD Capt. DJ Corcoran
2:51 PM EST February 20, 2019 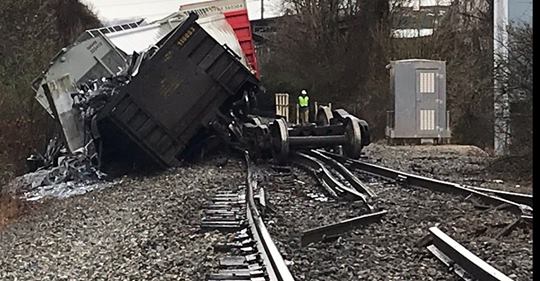 There were no injuries reported and no leaks detected, according to KFD Capt. DJ Corcoran.

"With no leaks and no injuries, the incident and scene were returned to Norfolk Southern Railway at 3:08 p.m.," Corcoran said.

While there were no leaks, the chemicals in the train cars could be hazardous to humans. Both liquids are hazardous to ingest, inhale, and can be highly corrosive to the skin. 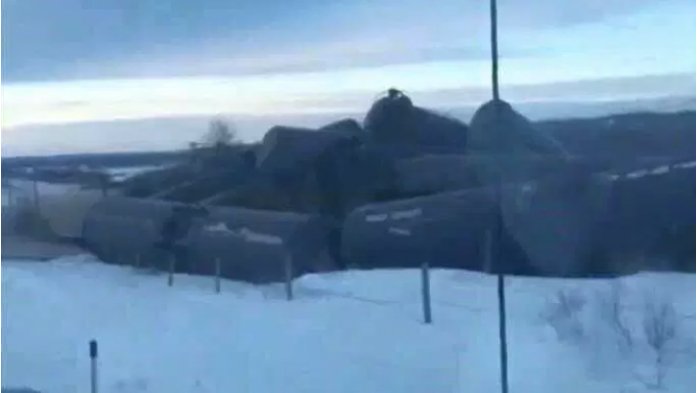 Reports suggest that CN crews are responding to the derailment near St. Lazare, which is located near the Manitoba-Saskatchewan border.

There are reports that the cars went off the tracks at about 3:30AM and some of the cars were carrying crude oil. It has been reported that some of the oil cars are leaking near St. Lazare.

CN is telling media that they are assessing the situation to determine how much product has spilled and to confirm how many cars derailed.

At this point, there were no reports of fires or any injuries.

Written by The Sofia Globe staff on February 16, 2019 in Bulgaria - Comments Off on Locomotive that pulled Hitrino disaster train derails at Bulgaria’s Plovdiv railway station

A locomotive that pulled the train that exploded in the Bulgarian village of Hitrino in December 2016 derailed in Plovdiv railway station on February 16 2019, disrupting rail traffic.

No one was injured and there was no danger from the train, which was transporting more than 2000 tons of LPG gas from Serbia to a distributor point in Plovdiv.

BDZ said that an investigative commission had been appointed to establish the cause of the derailment.

Plovdiv district prosecutor Roumen Popov said that the locomotive was the same as that involved in the Hitrino disaster. On December 10 2016, a gas tank transport train owned by the Bulmarket company exploded, leaving seven people dead, many seriously injured and causing extensive property damage in the village.

Commenting on the Plovdiv railway station incident, Bulmarket said that the train had been travelling at low speed. The company’s manager, Petar Ganev, said that the initial theory about the cause of the accident was a cracked rail.

The train had been travelling at 35km/h, below the 40km/h speed limit on that stretch of rail.

A National Investigation Service team is assisting in the investigation. Popov said that pre-trial proceedings had been initiated

Train derails near St-Lazare; 37 cars sent off the tracks

An early morning train derailment in southwest Manitoba has crews working overtime to inspect the damage and assess any environmental impact.

At around 3:30 a.m. Saturday morning, a train derailed near St-Lazare, Man.. Canadian National (CN) Railways is responding to the derailment and believes 37 cars carrying crude oil derailed and are causing “a partial leak.”

“Our environmental team is responding to start clean up, remediate the site and protect the environment,” an email statement from CN to 650 CKOM said. “A perimeter has been set up around the area to facilitate site access.”

CN is reporting no injuries or fires from the derailment and say a full site assessment is underway to determine how much material spilled and exactly how many cars were involved.

St-Lazare is about 60 km northeast of Moosomin, Sask. where hundreds are meeting for a pro-pipeline rally Saturday.

A Train Fell From A 60-Meter High Bridge In Canada

Posted on February 5, 2019
A freight train went off the track and fell from a 60 meters high bridge. The accident occurred on February, 4 in the Rocky Mountains on the border of the provinces of British Columbia and Alberta. As a result of the disaster, three people died, all of them are crew members. This is reported by company “Canadian Pacific Railways”, which owns part of the area where the accident occurred. The exact cause of the accident is not yet known but preliminary data indicate a possible violation of the speed mode.

It is advised that from 30 to 40 railcars filled with grain fell from the bridge. In total, the train had more than a hundred railcars and three locomotives. There is no information whether the fuel and other toxic substances have been released into the air.

Seemanchal Express derailment: The nine derailed coaches include three sleeper coaches - S8, S9, S10, one general coach and one AC coach B3. The mishap occurred in Vaishali at 3:52 am today. 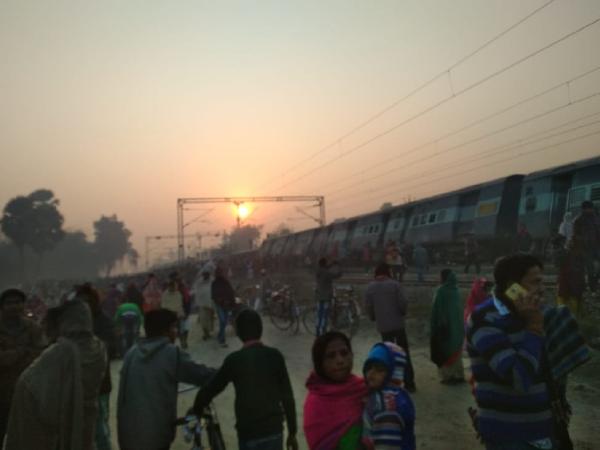 Patna: At six people were killed and several others injured after nine coaches of Delhi-bound Jogbani-Anand Vihar Terminal Seemanchal Express derailed in Vaishali in Bihar in the wee hours of Sunday morning. The accident took place at around 3:52 am, news agency ANI reported.