Like a comet, Sun seem to escape. Ciao Alberto 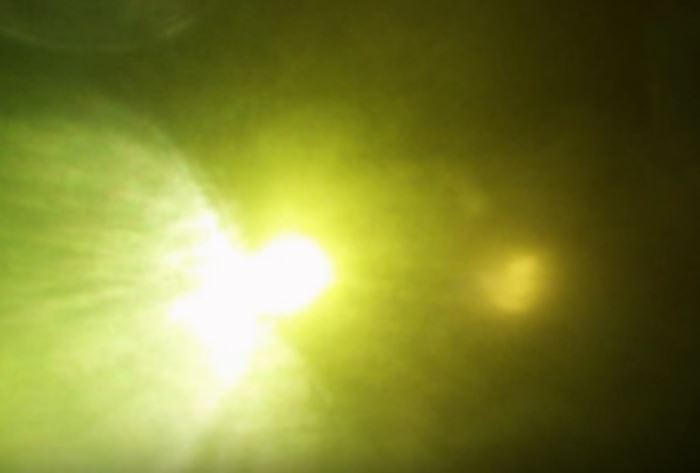 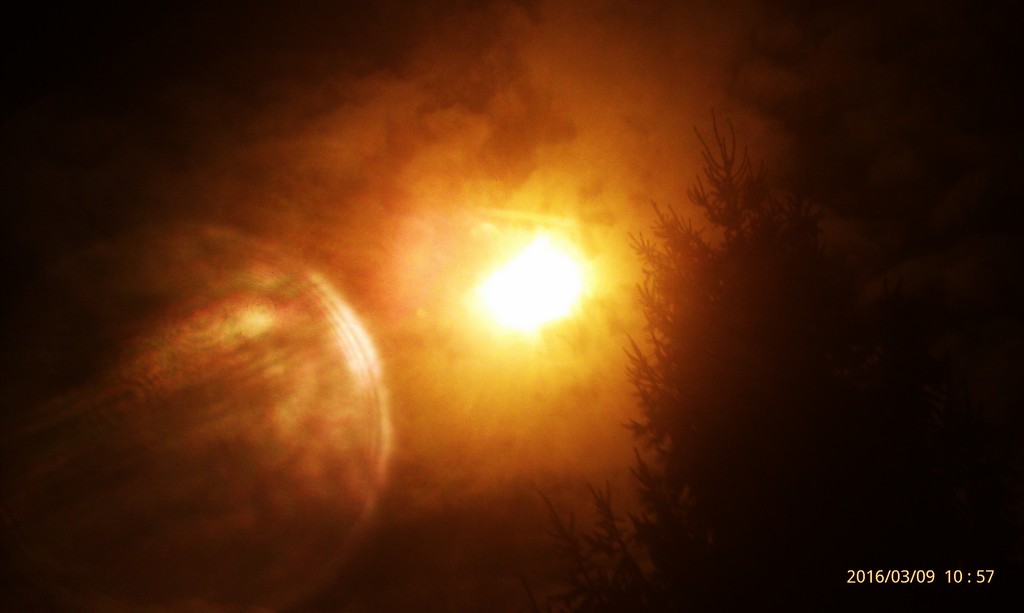 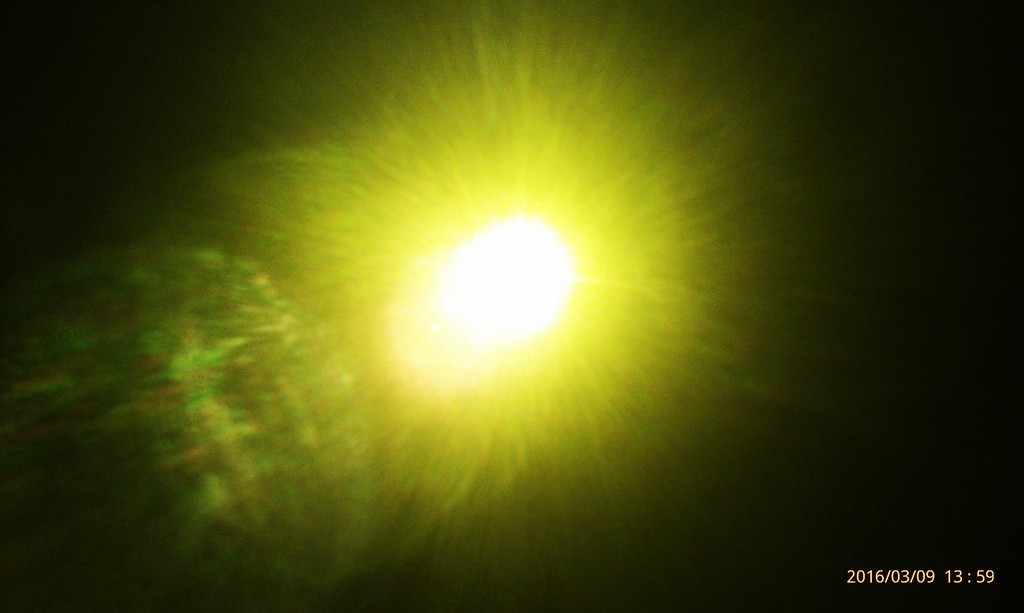 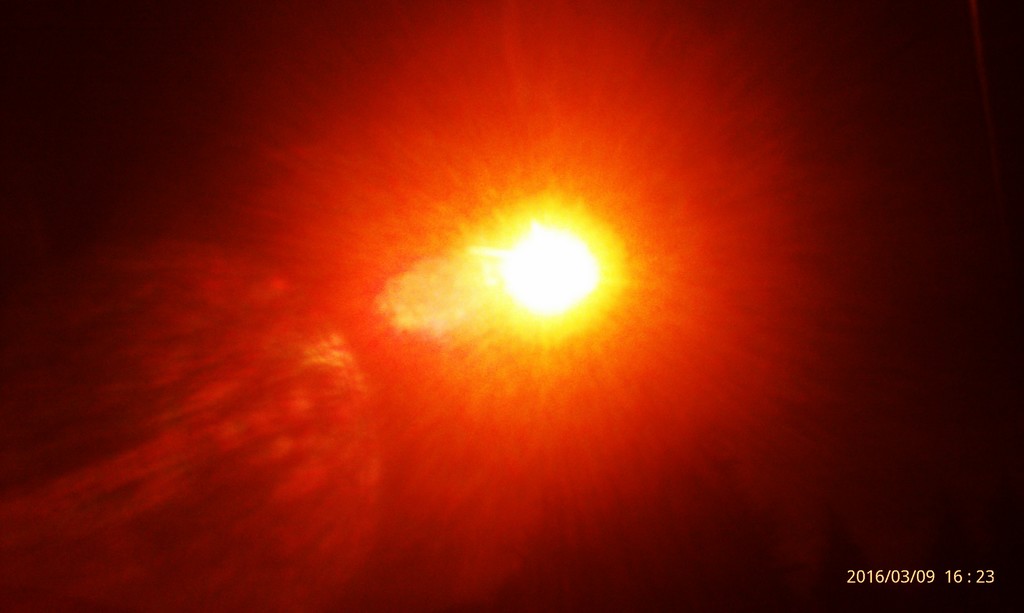 Here is ZetaTalk about light particles and their behaviour

In the recent past, humans considered the world around them to be composed of either mass or energy, energy being anything they could not put their hands around. Only within the past century has the notion that both mass and energy are solid particles become widely accepted. Energy is just really small stuff, moving fast. Increasingly, the really small stuff is identified, at least in theory as it is too small to be observed directly. The clues, for humans struggling to understand the world around them, lies in the behavior of small particles under different circumstances. Light is not composed of a singular particle, but dozens of particles, thereby accounting for much of what humans call the strange behavior of light.

ZetaTalk: Light Particle Bonds
written Apr 22, 2004 during godlikeproduction.com message board debates on why light bends toward a gravity sink

In trying to understand the behavior of light particles, which are many and not a single particle, humans boggle. They ascribe the various colors to speed of vibration, the wave pattern high or low, long or short. The breaking of a ray of sunlight going through a prism into a rainbow of colors is thus ascribed to a change in speed or a modified wave pattern, as though a sub-atomic particle is forced to compact and squeeze in some invisible tunnel. Does glass have invisible tunnels they force light rays into, or the ability to hold light particles back so they compress? They speak of reflection or refraction of light as though it were an object bouncing, which sub-atomic particles do not do unless a direct repulsion occurs. Are light particles repulsed by the sub-atomic qualities of a silver backed mirror, such that they bounce? They ascribe the Auroras to an attraction by light particles to electro magnetic particle, such that they dance, apparently, only at the poles, but balk at giving this attractive quality to gravity. The orange light that floods the sky at sunrise and sunset is ascribed to dust, of all things, with no explanation of why this spectrum is so affected but the other spectrums not. The huge size of a light emitting object such as the Sun coming over the horizon, in conflict with established human explanations, is rejected. If it conflicts with the current establishment line, it did not occur, and they call anyone saying otherwise deluded.

Why does light reflect from some surfaces, absorb into others, or change color when emerging from a prism? And what does this have to do with the obvious bending of orange/red light over the surface of the globe, as seen at sunrise or sunset? Is there a relationship? There is indeed. Some sub-atomic particles, a ready example being the many particles in the electro-magnetic arena, flow together, are attracted to each other, and are incited to move with each other by that attachment. Man thinks of electrons as being one sub-atomic particle and has barely considered magnetism to be a particle flow, yet these particles number in the hundreds, and are not all the same in their behavior. Light particles, thus, are immense in their numbers, and the various wave forms with resulting color signature recognized by a retina only one example of the many. Do these light particles like to flow with one another, being attracted to one another in a similar manner to the electro-magnetic particles? Obviously.

And as we have described, they flow not in a straight line, not in a wave form, but in a twisted cable form. Like the Moons of Planet X, they swirl about each other in a double helix pattern, neither escaping or bonding, in perpetual motion. These helix strands likewise coil around other strands, often in a criss-cross pattern depending upon how much distance the strands need from each other. Like electrons that chase but do not catch each other, and magnetons that are likewise always in motion and cannot stand crowding but likewise desire to clump, this is a dance that never ends, perhaps by God’s design. Where electrons can be caught and reside around the nucleus of an atom, and magnetons are normally humming about the nucleus of an atom, the flow of light particles is an aberration of their normal abode, within and around a nucleus. They emerge when this nucleus is flooded with particles and are pushed out due to crowding, due to pressure which crowds them or the application of heat which is in and of itself a particle flow, or the introduction of some bonded atoms that act as a catalyst for change. Light can be produced by friction, heat, emerges during fire, or by chemical mix, as man knows.

When the twisted coil is on the move it, as a group, moves in the direction that they particles were flung in by the explosion of particle crowding they were escaping. The direction of the light ray. When many particles are involved, this is considered by man to be white light, all color spectrums included, as the colors emerge when this white light is separated into its parts. The helix coils have another direction, other than the overall direction, which is straight ahead. They are moving away from, and back toward, the pairing particle in their coil. Depending upon the particle, this coil is tight or loose, with a wide wave length or short, and involves many other coils tightly attracted to it or few. When encountering other matter, these particle pairs find themselves in a marital crisis. One of the pair wants to have an affair with the other matter encountered, lingering, while the other partner cannot because the pair would then be too close, too crowded. Thus, the particle lingering forces the partner to exit the coil, suddenly, in the manner of their original expulsion from some comfortable atom into a light ray direction. The exiting particle of the pair leaves, likewise, in a direction that creates the least crowding for it with the other helix coils they are entwined with.

Thus, white light entering a prism of glass finds that the most vulnerable particle to an attraction affair lingers and expels its partner first. These particles having peeled off, the next most vulnerable particle is exposed to the adulterous attraction of some quality of glass, and lingers and expels its partner. This process proceeds until there is only the helix coils of those light particles that are resistant to attraction, by being so tightly bound to the coils, and resist the flirtations of nearby particles inherent in the glass. Some material simply absorbs the light rays by preventing them from leaving, an affair that has become a new marriage of sorts. Some material is so attractive that the lingering partner and expulsion proceeds at an almost violent pace, considered a complete reflection surface by man. When light coils pass over a gravity giant such as a planet, it is not the long distance call of a lover they are listening to when they curve toward that giant, it is the flow of gravity particles flowing back toward the planet. These are encountered on the way, slow the flow of those parts of the coil that are most attracted to the gravity particles, causing them to separate from the other parts of the larger intermeshed coil. This separation is not violent or sudden, as adjustments are made during the bumping process so the coils of those particles wanting to pull along with the flow of gravity eventually find themselves outside of the larger coil, and free to move in independent helix coils. Thus where white light, or light in color spectrums not susceptible to gravity particle attraction, move forward in their straight line path, the red spectrum lightsusceptible to gravity pulls toward the gravity particles drifting back to their gravity sink, and are bent thus, toward the gravity giant.

Alberto has provided this information. He is reporting that the range of color from red to yellow to green and then back to red is due to intensity of light from the Sun!

Important info. 7 images have all the mylar + orange filter.
The color change is due only to the sun that has different intensities.
I do not know why, but I think is important. Ciao Alberto