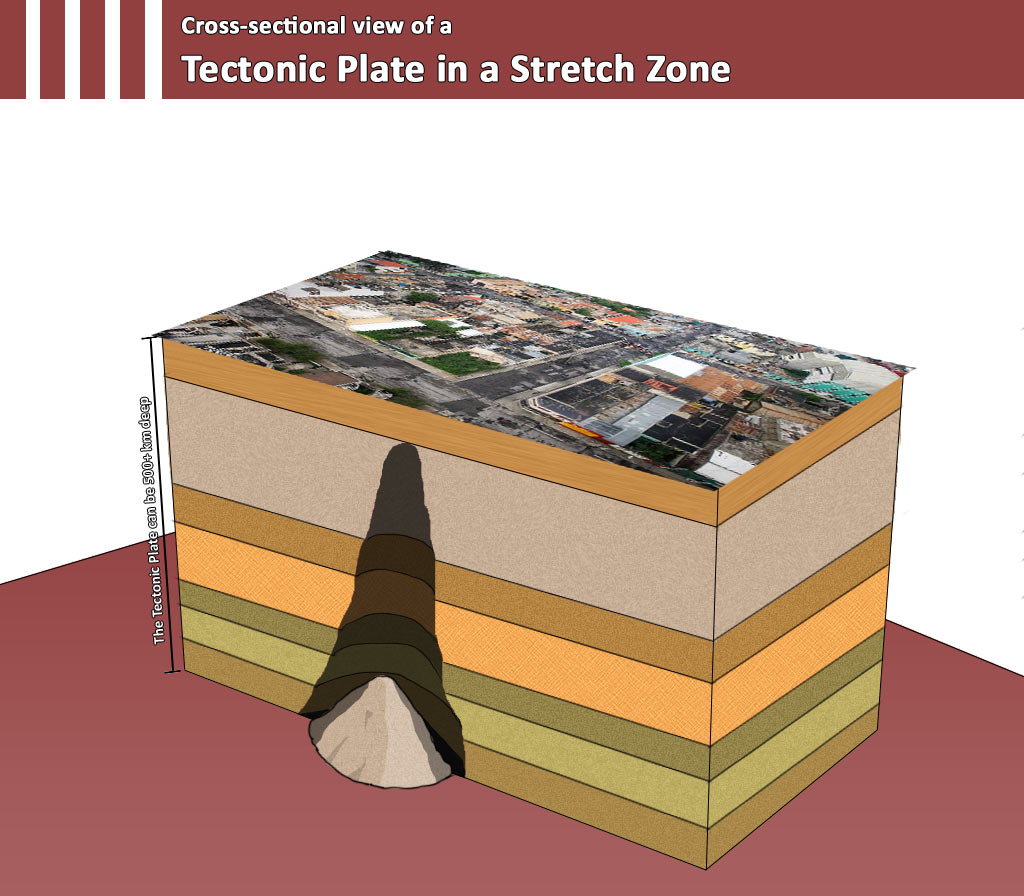 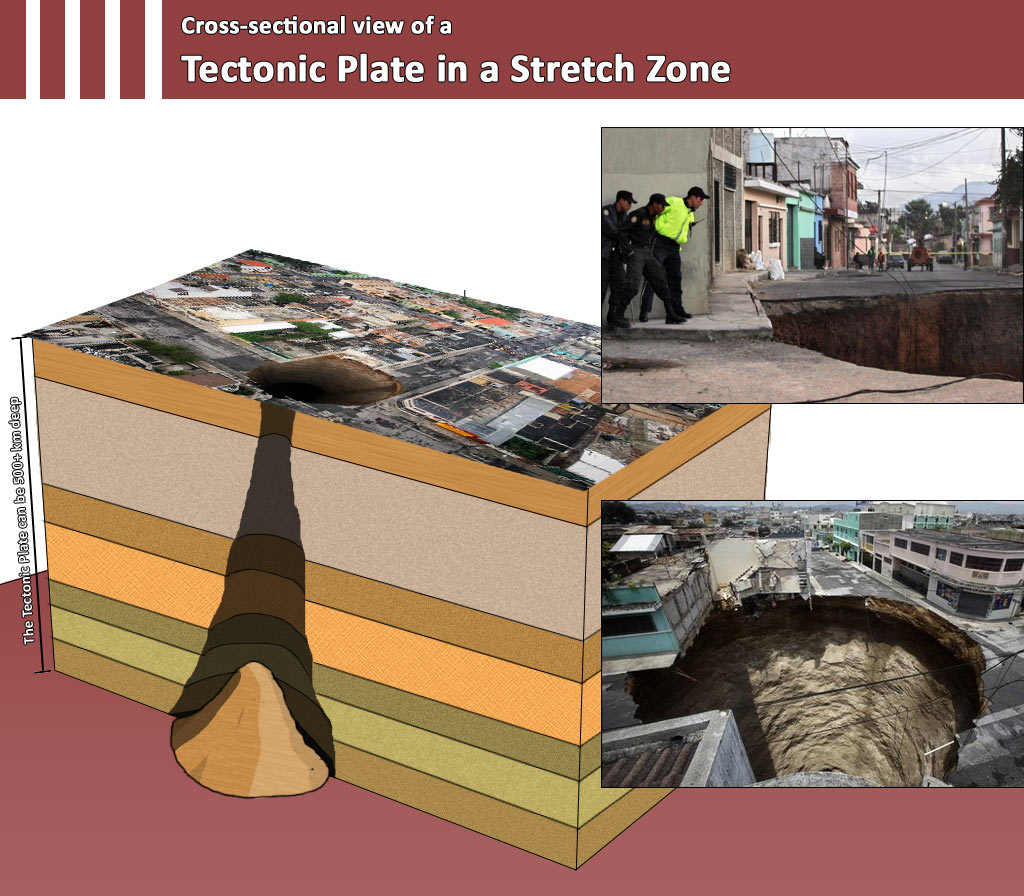 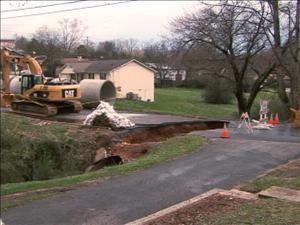 All Shrewsbury Drive resident Dora Gafencu can do is look across her street Thursday night, and see all the damage caused by the recent rainfall.

"Car is making a big 'boom boom' and I'm coming back from the church and the big hole was other there," she explained.

Earlier this week, a massive pipe broke through the road across from her house, causing Shrewsbury to close. Steve King of Knoxville Public Works said the heavy rainfall was a factor to this problem.

"We have a old pipe that historically rusts out and we don't use that kind of pipe anymore," he said.

Public Works is also focusing their cleanup efforts on Timothy Avenue, near the Knoxville Zoo. The stormwater caused several sinkholes to pop up. Crews said until the dry weather comes, they cannot do much to alleviate the problem.

"Detour people around and I understand that we have the new concrete pipe delivered and we hope to get a crane here soon to set it in the trench,"" King added.

Knoxville is more than 1" above the average rainfall as of March 10.

In Blount County, crews had a number of power outages to deal with. Alcoa Electric said about 500 outages were reported Wednesday into Thursday; many of those were in the Townsend area.

Meanwhile, while the power is back on, all people can do is wait for crews to start working on the roads, and bring life back to normal. 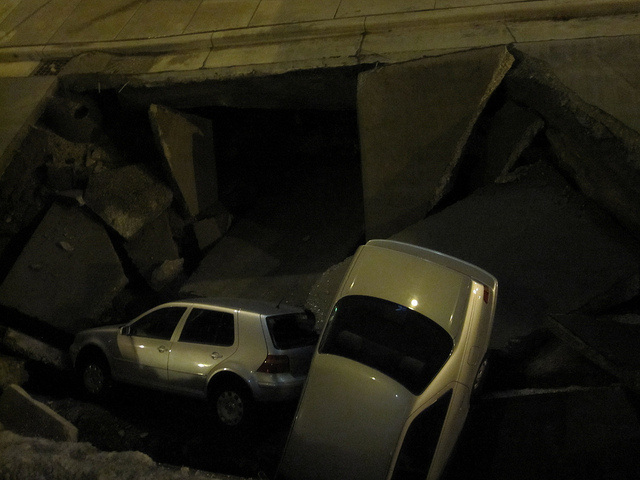 City crews are working to ensure that a sinkhole near the Humboldt Bridge does not widen, Milwaukee Department of Public Works spokeswoman Cecilia Gilbert said Sunday.

Gilbert said traffic is back to normal in the area around the paved ramp that connects the bridge to Riverboat Road, adjacent to Stubby's Pub & Grub restaurant, 2060 N. Humboldt Ave.

The two cars remain in the hole. The city is making arrangements to get a crane to extract them, Gilbert said.

Milwaukee Police reported that the water main break caused several other breaks and flooding throughout the north side of the city. The break occurred around 8 p.m., when residents reported low water pressure.

Gilbert said the main was 42 inches, a large size.  Source

The westbound lane of 14th Street between F and G Street NW has been closed to traffic due to a sinkhole.

DC Department of Transportation spokesperson John Lisle says the collapse of the road happened around 10:30 AM and that it appears to have been caused by a broken 6"water main.

DC Water says crews are currently repairing the water main and that some customers may experience a disruption in water service until repairs are complete.

DC Water officials estimate repairs to be completed and the street reopened by midnight.

A sinkhole caused by a broken water line will force the closure today of Stony Point Road in East Knox County.

Jim Snowden, with the Knox County department of engineering and public works, said his crews determined the sinkhole near the road was caused by a Knoxville Utilities Board water line.

The Knox County E-911 Center was alerted about 7:30 a.m. of the sinkhole at 1980 Stoney Point Road near Stoney Point Baptist Church. That's near the intersection with Thorn Grove Pike.

Snowden said the hole wasn't in the road, but was weakening one lane that has been closed.

Both lanes will be closed throughout the day, Snowden said, to allow KUB crews to excavate the pipe and repair the roadway. He estimated the road will be reopen by late this afternoon.

The City of Gig Harbor continues to investigate the cause of the sinkhole at the intersection of Judson Street and Pioneer Way.

According to Public Works Superintendent Marco Malich, his crew responded to the site after a citizen member notified the city around noon on Wednesday.

He credited the public for reporting the problem before the asphalt fell through completely.

"It could have caved in," he said "It was good that we got on it as quick as we did."

The sinkhole temporarily shut down Judson Street in front of Key Bank and one of the lanes on Pioneer Way.
During the investigation, the crew drilled a 10-by-8 hole and almost 10 feet into the ground to determine the cause.

Although the exact (cause) is still unknown, Malich said sinkholes typically occur when utility pipes are installed, and there isn't enough soil compaction under the road. He also said a punctured storm line could cause the land to depress.

Once the water flow in the basin decreases on Thursday, Malich said they will go down a nearby manhole to inspect further damage.

"From looking at the structure from the above, it does appear that we could have some watering issues that we're going to be taking care of."

In the meantime, he said the road is sealed, and it is safe for drivers to travel down Pioneer Way.

Bob Monaghan wakened to a loud boom on Monday morning – then saw an oil truck stuck in a sinkhole on Conant Drive.

The truck had been on its way to Monaghan’s raised ranch to fill the oil tank, but it never made it as its wheels got stuck in thick mud oozing from underneath the pavement.

The 8:15 a.m. incident led police, fire, DPW crews and two large cranes to the cul-de-sac on the city’s West Side to remove the truck from the deep rut.

“The most amazing thing was they put a big yellow strap around the truck and literally picked it up like a big baby,” said Monaghan, 58, from the living room of his home on Monday.

Mark Willis, the truck driver, said he had a sinking feeling – after his truck couldn’t go any further.

At first, Willis thought all the tires on the passenger side went flat. Then, the asphalt started shooting out from underneath the truck, he said.

After the truck sank, crews pumped out about 17,000 pounds of fuel into another truck to lighten the load so that cranes could lift the vehicle out of the hole.

“We’ve certainly on driveways had some issues, but I don’t recall ever having had a vehicle fall into a road, ever,” said Jim Bicknell, owner of the Weymouth-based Alvin Hollis & Co.

He said the vehicle checked out “completely fine” for its weight limit.

“It could be water underneath the pavement. The pavement just gave way,” Thoreson said.

Last year, the city saw a couple of similar incidents, where water ran underneath the asphalt top and “kind of erodes the bottom,” he said.

“Another issue could be a private subdivision where the road wasn’t built to specification ... over the years that breaks down,” he said.

City crews are assessing damages on Conant Drive, he said.

It was unclear on Monday when the street would be fixed, since Conant Drive is a private road and is not eligible for state or federal funding, Thoreson said.

“We’ll figure out what it looks like to fix, see what we got in the budget and see if we can get it fixed,” he said.

Large Sinkholes Cause Street Closures in Glendale and Phoenix (Arizona)

There were already restrictions in the area because of the construction on Camelback Road. That construction has been going on for some time, but now the huge sinkhole, probably caused by recent rain, is making the situation worse.

The sinkhole is about 12 feet wide and several feet deep. It’s right in the middle of the intersection.

According to the Glendale Fire Department, calls about the hole started coming in Sunday afternoon.

Drivers were able to avoid the hole so no injuries were reported. As a safety precaution, crews checked the area for gas leaks. There were no problems with that.

There’s no word when the hole will be fixed and the street reopened.

Drivers were being advised to use 59th or 75th avenues as alternates. While Camelback Road is open, drivers looking to avoid the situation completely might want to consider Indian School or Bethany Home roads.

A second sinkhole was reported on Seventh Street at Peoria Avenue in Phoenix. That hole is reportedly up to 15 feet deep and was caused by a water-main break. Seventh Street is restricted in the area; one lane is getting by in each direction. Cave Creek Road is the alternate route for that one.