The red lights in this display strongly resemble the formation of the Great Dipper, with one exception - the blinking bright white light within the dipper. So the question might be - what shall this display carry as message and to whom? [and from another] http://www.weather.com/news/news/san-diego-california-strange-flash...  The lights appeared southwest of Coronado Bridge, the Sun Times reported. The lights looked like a strobe light and shone in red, blue and green colors. If it was a plane, it would have moved. [and from another]UFO San Diego 2015 - One of the Best Ever 01.05.2015. http://www.youtube.com/watch?v=wuw2xpFfJwc#t=1198  The color/contrast/spectral changes made in this video illustrate that it is impossible for these to be faked with editing software. There is no hanky-panky being played here with the image. [and from another] http://www.youtube.com/watch?v=wyeWB_79ckE  Published on May 2, 2015. One of the best UFO sightings I have ever seen occurred in San Diego, CA just a few days ago. The video was filmed by the NBC7 news crew in San Diego, based off of a tip from a local viewer who sent in a number of striking photographs of aerial phenomena. [and from another]http://en.wikipedia.org/wiki/Big_Dipper  The Big Dipper (US) or Plough (UK) is an asterism (not a constellation) of seven stars recognized as a distinct grouping in many cultures.[and from another] http://en.wikipedia.org/wiki/Pleiades  The Babylonian star catalogues name the Pleiades MUL.MUL or "star of stars", and they head the list of stars along the ecliptic, reflecting the fact that they were close to the point of vernal equinox around the 23rd century BC. The earliest known depiction of the Pleiades is likely a bronze age artifact known as the Nebra sky disk, dated to approximately 1600 BC. [and from another] http://en.wikipedia.org/wiki/Equinox  An equinox occurs twice a year, around 20 March and 22 September. The word itself has several related definitions. The oldest meaning is the day when daytime and night are of approximately equal duration. 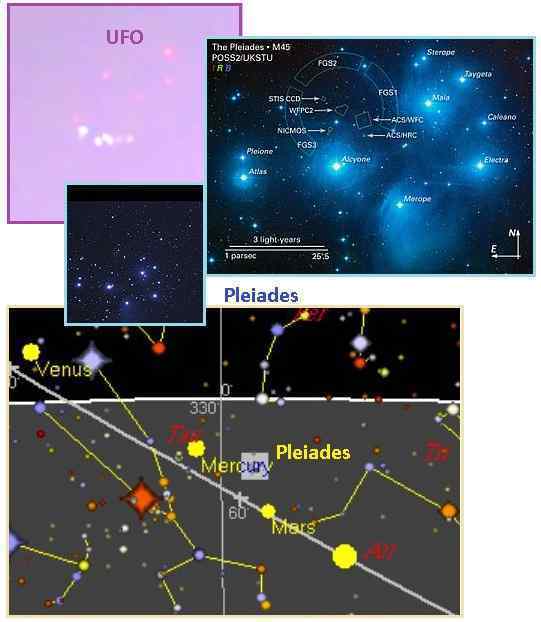 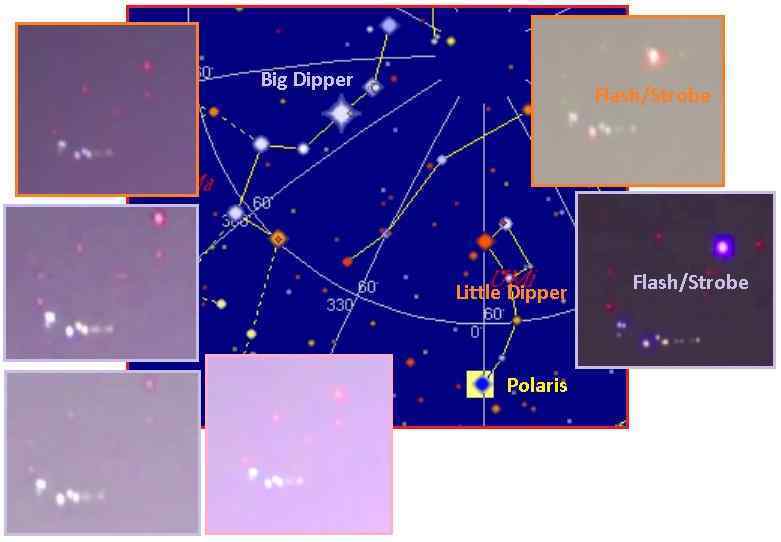 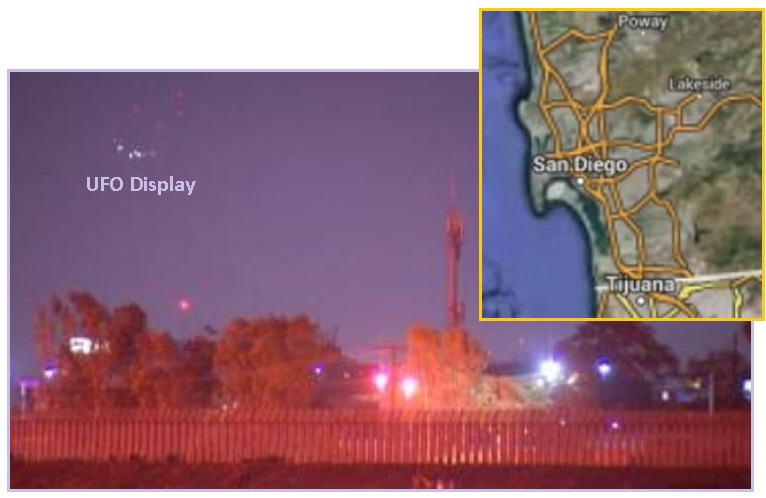 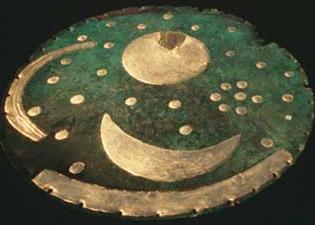 This genuine UFO display over San Diego was recognized as a constellation design. Speculation included the Pleiades star cluster or Ursa Major (Big Dipper). It is clearly the latter as the handle of the Big Dipper is present. The display has complexity, from a strobe UFO light in the center of the dipper to a cluster of bright white lights at the end of the handle. The outline of the dipper is also upside down, a full 180° turn  from what is expected of the Big Dipper at this time of night. What is the intent of the display? What message is being delivered to the populace below?

The Earth wobble has placed Polaris, the North Star, out of position for much of the world, so that it is too high in the dome or thrown to one side or the other. The rotation of the Big Dipper, normal during the 24 hour Earth day, is also affected by the Earth’s stalled orbit. Astute observers have noted this, but as the establishment denies the presence of Nibiru and the Earth wobble, this is not openly discussed in the media. In private conversations, the astute observer is most often ridiculed, as denial comforts those frightened by the implications.  The UFO display, by emphasizing the Big Dipper, a widely recognized constellation, is calling attention to these aberrations.

The purpose of the strobe UFO was simply to call attention to the display, which indeed got noticed, reported in the news, and as it remained in place for more than a day, viewed by many. Where Polaris, the North Star, is the last star in the handle of the Little Dipper, by bringing the Big Dipper up for discussion Polaris will invariably become a focus. Constellations are more notable in the night sky than single stars, such as Polaris. Why the scatter of bright lights in the handle of the Big Dipper? Here again, it is to create curiosity and discussion – Big Dipper, single strobe light, single star, handle cluster, handle, ah Polaris at the end of the handle of the Little Dipper.

The Nebra Disc also came up for discussion during analysis of this San Diego UFO display. The Nebra Disc includes a representation of the Big Dipper and the Pleiades, and is dated to approximately 1,600 BC. In addition to this reference to the time of the last passage, it shows the night sky in March for Germany, where the disc was located. As we have explained, the Spring, Passover time, was when the last passage occurred. Once again, the Nebra Disc is under discussion as a result of the UFO display. Why was San Diego chosen as the site? As we have mentioned, San Diego is the center of the N American continent bow. When the bow stress is relaxed by adjustments in the New Madrid fault line, San Diego will have an immediate and forceful jerk to the West.  By telepathic communication during the UFO display, the city of San Diego was being warned.

Via email, more analysis and evidence:

it looks as if this light display appeared between the mountain and the observers as these mountains are quite distant from the city itself. Via email. Superimpose the UFO display over the towers, and it does not fit.

in regard of the debunking video one might say the following:
using this video and the nbc video, both of relatively poor photographic quality and resolution
i made a superimposition (using a photoshop compatible software).
resultit seems that there are some masts up on the mountain like some sort of a radio/radar station
- some lights are therefore superimposable, but some are not
- the number of red lights (eg air warning lights) does not correspond with all positiions of masts visible
(either there should me a lot more present or less)
- the white stroboscope does not superimpose with masts visible
. the white lights on the bottom to the left seem to be lights from the buildings up there

Another sign that this sighting was highly significant by the authors and not just hilltop lightpole lights,  is that it was on May 5th,  Cinco De Mayo!  San Diego being close to Mexico,  the celebration brings many folks outdoors, dancing in the streets to witness the unusual event.  They would look up and notice and tell everyone to look up too!

@ Nancy, similar to this UFO display being debunked, the strange sounds captured in British Columbia & posted by Howard here have been met by debunking.

the City of Terrace posted a note on their Facebook page saying they were responsible for the noise...

So anywhere I see this strange sound from British Columbia on the internet, I add the Kiev trumpets & other such howls as a reply, so that the coverup's narrative is put in doubt.

"In 2013, the City of Terrace claimed responsibility for the sound, claiming it was the result of a grader blade.

Example of grader in action:

"According to city officials, Tuesday's sound is the result of the same thing.

"Looks like the mystery has been solved unless you're one of the hundreds online who aren't buying the city's story."

One of the video authors is now claiming that the whole UFO sighting, which hit the Weather channel and NBC7 news (who made their own video) has been debunked, as a mountain with towers is in the background.

But none of the features of this mountain top seem to match the UFO display. Nor were any of the local residents who filmed the UFO familiar with such lights, which presumably would have been blinking away or up there every night. Nor do we have a shot of what this mountain top looks like at NIGHT. This is either a case of someone getting to him OR a clever use by the UFO makers to take advantage of the local terrain so that the Element of Doubt could be maintained. Here's the shot of the mountain top provided. Didn't NBC7 ask the locals who looked in that direction every night if this was new to them? Surely they vetted the display to that extent. Ah, I fear the cover-up is with his still, alive and well.