There is news about Myanmar conflict. It starts from Muslim insurgents. And now Jakarta and Russia was touched. Now we have a lot refugees. Russian's article on RT about Myanmar incident mentioned Soros footprint. May be Zetas can explain? [and from another] https://www.rt.com/news/400816-myanmar-attack-army-police-rohingya/ Five policemen and seven Rohingya Muslim militants are preliminarily reported to have been killed in a large series of attacks on 24 police posts and an army base in the troubled northwest Myanmar state of Rakhine. The militants mounted 24 coordinated assaults on police posts throughout the western state and tried to break into an army base, according to reports cited by Reuters. [and from another] http://www.channelnewsasia.com/news/asiapacific/molotov-cocktail-th...  A Molotov cocktail was thrown at the Myanmar embassy in central Jakarta. [and from another] https://www.rt.com/news/401966-grozny-rally-myanmar-muslims/  Police say a million people have turned out for a protest rally in Grozny, the capital of Russia’s Chechen republic, to protest the violence in Myanmar, where government security troops are conducting a large-scale crackdown on the Muslim Rohingya minority. [and from another] http://www.theaustralian.com.au/news/latest-news/myanmar-urges-rohi...  Nearly 90,000 Rohingya have fled to Bangladesh since violence erupted in Myanmar in August, pressuring scarce resources of aid agencies and communities already helping hundreds of thousands of refugees. Myanmar officials blamed Rohingya militants for the burning of homes and civilian deaths but rights monitors and Rohingya fleeing to neighbouring Bangladesh say the Myanmar army is trying to force Rohingya out with a campaign of arson and killings. [and from another] https://russian.rt.com/world/article/425981-rohindzha-musulmane-myanma What is really happening in this Indochinese country, where does George Soros and how events in Myanmar will affect the world Islamic ummah - RT explained. According to the Burmese Nationality Law (formerly Myanmar) of 1983, Rohinj is not recognized as a citizen of the country, and therefore deprived of all civil rights, including the possibility of receiving medical care and education. A considerable part of them is forcibly kept in special reserves - centers for displaced persons. The exact number of Rohinj is unknown - presumably, there are about 1 million people.  Previous crises related to the persecution of Rohinj, led to a mass exodus of refugees. In 2015, almost 25 thousand Rohingja were forced to leave the country. Called in the world press "boat people", they rushed to Bangladesh, Thailand, Indonesia and Malaysia. [and from another]http://www.cnn.com/2017/09/01/asia/bangladesh-south-asia-floods/ind... And still the rains keep coming. In Bangladesh alone, floods have so far claimed the lives of 142 people, and impacted over 8.5 million. Bangladesh is no stranger to flood related disasters. Much of the country is built on low-lying and flood-prone areas, making it particularly vulnerable to seasonal monsoon rains. In 2007 more than half of Bangladesh was seriously affected by deadly monsoon flooding 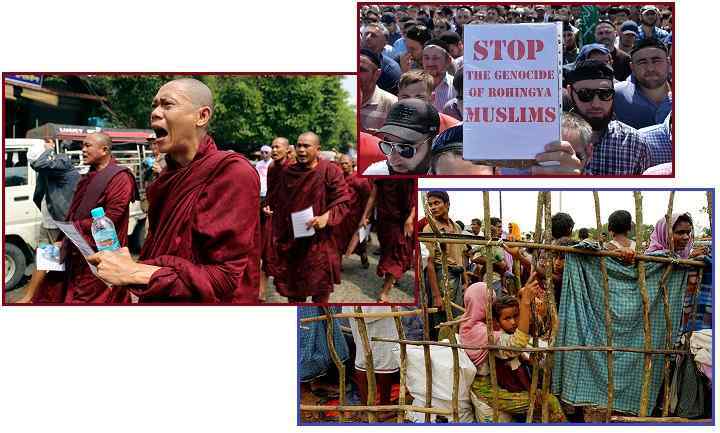 We have long predicted that migration issues will dominate during the 8 of 10 phase, particularly from sinking countries such as India and Bangladesh. Combine the sinking of the Indo-Australian Plate with the sinking in Indonesia, and this region shows the face of the future. For the Rohingya the issue is complicated by religion. History is laced with examples of the cruelty of religions when encountering those holding a different faith, from the Christian Crusades to Muslim Jihad to Hitler’s holocaust. The Buddhists in Myanmar are now murdering Muslims, strictly for religious reasons.

This is not a new issue for the Rohingya, as the issue hit the press in 2012. We predicted then that the Rohingya would learn to live on boats, on houseboats, and that this will become the mode of survival by many as migration pressures emerge from sinking lands. China, which has over a billion people to care for during the coming Pole Shift, is blocking migration from India and Asia. Australia will simply murder those trying to climb onto their shores. Russia will have flooding in its industrialized regions, and likewise will not tolerate migration. Africa is under populated and under developed. But learning to harvest seaweed and fish while forming houseboat communities is the best solution.