Humanity is on the verge of discovering alien life, high-ranking NASA scientists say.

"We know where to look. We know how to look," Stofan added during the event, which was webcast live. "In most cases we have the technology, and we're on a path to implementing it. And so I think we're definitely on the road." [5 Bold Claims of Alien Life]

Former astronaut John Grunsfeld, associate administrator for NASA's Science Mission Directorate, shared Stofan's optimism, predicting that signs of life will be found relatively soon both in our own solar system and beyond.

"I think we're one generation away in our solar system, whether it's on an icy moon or on Mars, and one generation [away] on a planet around a nearby star," Grunsfeld said during Tuesday's event.

Recent discoveries suggest that the solar system and broader Milky Way galaxy teem with environments that could support life as we know it, Grunsfeld said.

For example, oceans of liquid water slosh beneath the icy shells of the Jupiter moons Europa and Ganymede, as well as that of the Saturn satellite Enceladus. Oceans covered much of Mars in the ancient past, and seasonal dark streaks observed on the Red Planet's surface today may be caused by salty flowing water.

Farther afield, observations by NASA's Kepler space telescope suggest that nearly every star in the sky hosts planets — and many of these worlds may be habitable. Indeed, Kepler's work has shown that rocky worlds like Earth and Mars are probably more common throughout the galaxy than gas giants such as Saturn and Jupiter.

The moon's got two tails – and its friends might too http://www.newscientist.com/article/dn27275-the-moons-got-two-tails...

(The moon has always had a small tail blowing away from the sun. But now, it turns out the moon has 2 tails. Is this second tail there because of Planet X?)

Has the orientation of the Moon shifted in the past? According to the d

istribution of ice on the lunar poles, that seems to be the case.

When the team created the map [of trace amounts of ice on the moon], they found that the ice on both poles was lopsided....

If that’s the case, there would need to be some mechanism for the shift, which is too big to be due to some kind of impact event.

Are orphan planets more common than we thought? Drifting worlds may be common thanks to 'mother' clouds of dust and gas

Planets wandering through space, unattached to any star or solar system, may be much more common that previously thought, according to an expert.

The planets are hard to find because, without orbiting a star, they reflect very little light.

But 50 have now been found in the past 15 years, leading some to suggest they may be abundant in the universe. Ashley Yeager for Science News has explained that solo planets (artist's impression shown) could be common. This is thanks to more regions of dust and gas than we thought. Planets become 'rogue' when they are ejected or form on their own and about 50 have been found in the last 15 years

Rogue planets, or interstellar planets, are planetary objects that were either formed by themselves or were ejected from a system.

WHAT IS A BROWN DWARF?

A brown dwarf is commonly regarded as the ‘missing link’ between stars and planets.

They are too large to be classed as true planets, but too small to have ignited nuclear fusion at their cores and be classed as stars.

When a celestial body first forms, its size will determine what sort of object it becomes.

As a star forms from a cloud of gas, its core becomes so large that hydrogen fuses into helium. Conversely, a planet forms into a smaller sphere that is not large enough to have nuclear fusion at its core.

Brown dwarfs fall somewhere in between. They are the size between a gas giant like Jupiter and a small star.

Their mass, meanwhile, can be anything from 15 to 75 times the mass of Jupiter.

This is not enough to sustain fusion but, owing to their size, this has led astronomers to coin brown dwarfs ‘failed stars’.

As they don't emit much light it’s thought there may be many rogue brown dwarfs drifting through the galaxy waiting to be discovered.

How abundant they are in the universe, though, has been the cause of some debate.

But Ms Yeager explained so-called globulettes - regions of dust and gas that can form planets - could make them more common than thought.

The number of possible planets in one such region is not known, and this depends on what the boundary between cloud density and planet formation is.

‘Even if only a small fraction can be made to collapse, they could make a significant contribution to the population of free-floating planets.’

Rogue planets are of particular interest to astronomers because they represent objects that have likely failed to form into a star.

Brown dwarfs, for example, are substellar objects that are not massive enough to sustain fusion, but are still more than 13 times the mass of Jupiter.

The exact boundary between a giant planet and a low-mass brown dwarf is still being debated, but finding more rogue planets could shed light on this mystery.

And this could indicate that there are more rogue planets than we know of in the cosmos.

Mysterious "white spots" on the dwarf planet Ceres extend over the crater wall.

As the team reported to Andreas Nathues from the Max Planck Institute Solar System Research to date on the Lunar and Planetary Science Conference, the angle of reflection of this highly reflective structures changed with the rotation of the dwarf planet and the white spots remain visible, even If They already crater rim from shoulderstand be covered and the crater interior is already in the shade (s. fig.). This circumstance Suggesting did whatever the sunlight reflecting here, must rise Relatively high above the another of the surface of Ceres. 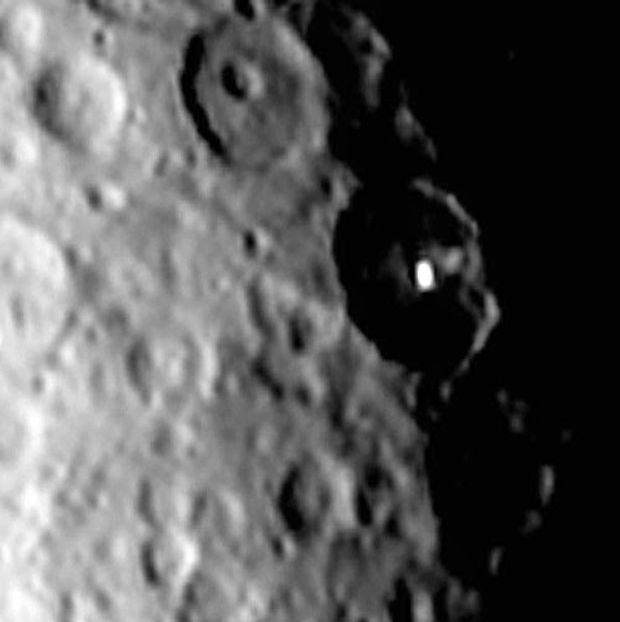 Obama jokes about "plausible deniability" re: Aliens with Jimmy Kimmel

Planets in the habitable zone around most stars, calculate researchers

The calculations show that billions of the stars in the Milky Way will have one to three planets in the habitable zone, where there is the potential for liquid water and where life could exist

Elite who want to escape poleshift are running their "Mars" campaign. https://www.youtube.com/watch?v=WH8kHncLZwM

(Doesn't everybody gain, if we get more from this campaign by the elite?)

All major US banks pass economic "stress test." Hmm, I wonder could cause such a situation...