I just want to make a comment about the reported 5.6 earthquake in Oklahoma.  I am vacationing in Minneapolis and this morning I was awakened by what I felt like an earthquake causing my hotel at Mall of America to sway.  I had to look outside the building to see if everything was alright.  I dismissed the incident because I have never felt an earthquake before but later this afternoon I heard about the news that the quake was felt all the way to North Dakota and Houston.  I'm sure this is much bigger than the reported 5.6 but I'm surprise that it traveled so far.  Is there any explanation for this?  [and from another] http://strangesounds.org/2016/09/m5-6-earthquake-in-oklahoma-felt-a... M5.6 earthquake in Oklahoma felt across the entire midwest, from North Dakota through Houston. At 7:02:44 am local time, a major, M5.6 earthquake hit 14km northwest of Pawnee, Oklahoma. It rattled a swath of the Great Plains, from Kansas City, Missouri, to central Oklahoma. It was the strongest quake to hit Oklahoma in years. [and from another]http://bigstory.ap.org/article/34f0e22aa7f94ca187d02886167f1903/ear... People in Kansas City and St. Louis, Missouri; Chicago; Gilbert, Arizona; Fayetteville and Little Rock, Arkansas; Des Moines, Iowa; Memphis, Tennessee; and Big Lake in the southwest part of Texas, all reported feeling the earthquake. Dallas TV station WFAA tweeted that the quake shook its studios. [and from another] http://www.news9.com/story/33008574/big-earthquake-rocks-central-no...  [and from another] http://earthquake.usgs.gov/regional/nca/virtualtour/earthquake.php The Northern California Earthquake, April 18, 1906. The earthquake was felt from southern Oregon to south of Los Angeles and inland as far as central Nevada, an area of approximately 200,000 square miles, nearly 8 times greater than that of the 1989 Loma Prieta earthquake (magnitude 6.9). The intensity of shaking that an area experiences during an earthquake depends on the magnitude of the earthquake, its distance from the fault, and the type of ground materials. Soft, water saturated sands and sediments amplify the shaking even at great distances from an earthquake, while bedrock shakes to a much lesser extent. 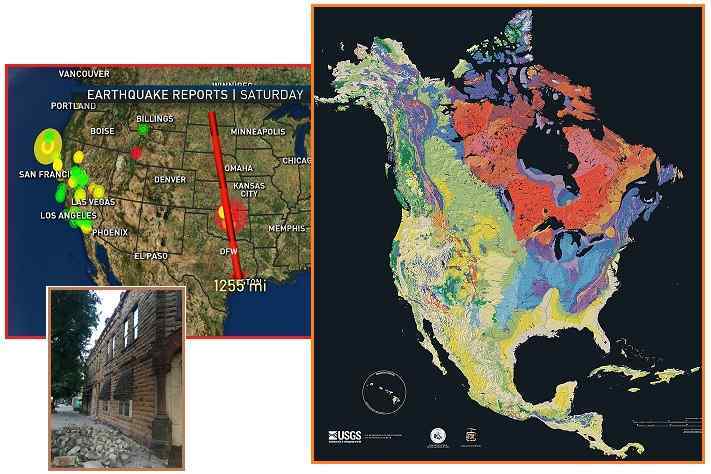 Clearly this Oklahoma quake was not a magnitude 5.6, when swaying was felt over a 1,255 mile swath. Compare this to the swath of motion recorded during the 1906 quake in San Francisco, which was only felt as far away as Nevada, a neighboring state. It is known that quakes that result from adjustments close to the surface result in the most damage to mankind’s structures. Deep quakes are absorbed by the surrounding rock, thus little shaking arrives at the surface. This Oklahoma quake was deep, and should have been recorded as a 9.5.

Clearly this deep quake was in preparation for adjustments along the New Madrid Fault Line, which will result in immense structural damage to mankind’s infrastructure. The Oklahoma quake adjustment was along rock strata that is more rigid than the soft rock that ripped, taking the path of least resistance by pulling apart soft rock throughout the midsection of the N American continent. Essentially, the upper Midwest moved somewhat further East, while the Southwest moved with Mexico to the West. This is the diagonal pull that the N American continent endures, which ultimately results in the New Madrid adjustment.

We have long been on record stating that the big New Madrid quake will start with relatively minor quakes of a magnitude 6-7. Of course, due to the downgrading that the USGS does, these quakes along the New Madrid Fault Line will be called a magnitude 4-5. But structural damage will result in the cities along the Mississippi, and to bridges that cross the Mississippi.  Then the big New Madrid adjustment will hit. The deep rock adjustment during the Oklahoma quake should not be considered to be included in our prediction, though it is obviously heralding the start of the New Madrid process.