Obama seems to be hinting at something here. I know the Zetas stated they would not pick Obama’s mind, not honor questions that ask about his thinking, but here Obama has provided info openly. Is he trying to get people ready for an Executive Order of some sort? [and from another] http://www.dailymail.co.uk/news/article-3177580/President-Obama-sum... The host of The Daily Show, who will finish his 17-year run on the show next week, held talks behind closed doors with the President in 2011 and 2014 after being summoned by his aides. Obama made his seventh and final appearance on the show, and told Stewart: 'I can't believe you're leaving before me. 'In fact, I'm issuing a new executive order that Jon Stewart cannot leave the show.' The president continued to kid his host and added the order is 'being challenged in the courts'. July 28, 2015 [and from another] http://www.politico.com/agenda/story/2015/07/jon-stewarts-secret-wh... Obama White House officials enjoyed it when Stewart was singing from the same hymnal. But they also were quick to pay attention when he turned against them. Obama ultimately appeared seven times on Stewart’s show. [and from another] http://thedailyshow.cc.com/full-episodes/skawjk/july-21--2015---bar... [and from another] http://freebeacon.com/politics/obama-im-a-pretty-good-president-and... Obama: ‘I’m a pretty good president’ and if I ran for a Third Term, I could win. July 28, 2015 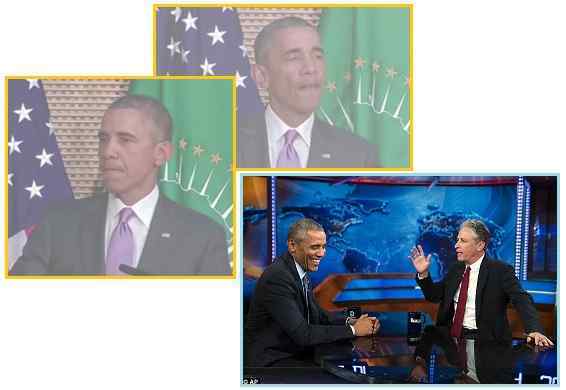 What is Obama hinting at? Obama made a statement during a speech to the African Union on July 27 that alluded to a third term. This was in the context of discussing African presidents who refused to step aside when their terms had completed, but he was clearly hinting. Might Obama delay or cancel the 2016 elections and continue, under some kind of Executive Order, into what would be called a third term? Then there was the Executive Order joke on Jon Stewart’s show on July 21, implying he could reach outside of normal government actions via his Executive Orders, requiring Jon to continue his show and not retire. Put all this together and it is a pretty strong hint of what is to come!