Noticeable Weather Wobble in Europe on May 2013 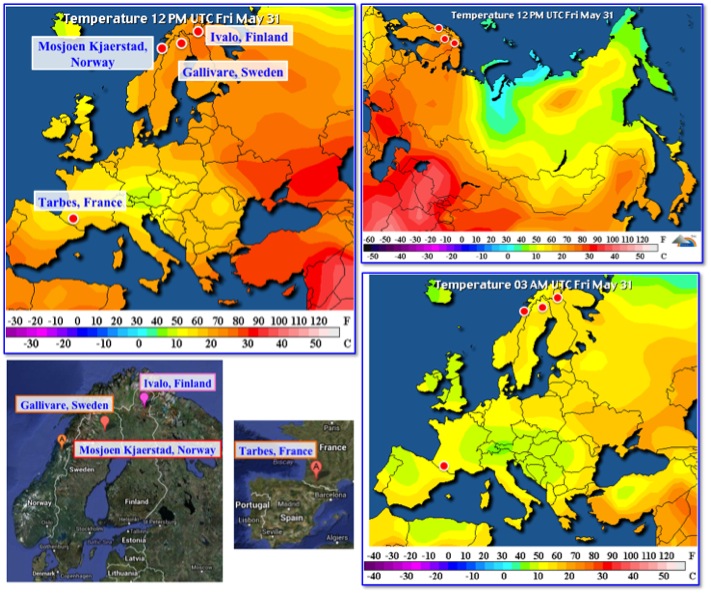 3) The coldest spring in over 40 years (Germany)

4) Incredible on the Piccolo San Bernardo, Italy: 10 feet of snow in late May!

9) Snow and winds of 65mph hit Devon and Cornwall

11) Italian News - Tornado near Modena! Thunderstorms over the Alps, Apennines and Sardinia.

12) Switzerland devastated by bad weather, 500mm of rain in the last week! Landslides and flooding, photos

17) Blending of the seasons, a definite YES; Yesterday in the south of France we were sweating it was HOT, 29C. Today however, sweater and jacket were needed as it was only 11C, which comes to a difference of 18C within 24 hours! Unseasonably heavy rains brought serious flooding to Germany, Austria, and the Czech Republic in early June 2013. In some areas of eastern and southern Germany, the flooding was described as the worst since 2002. At least 16 people have died and thousands have been displaced. Further downstream along the Elbe, Vltava, and Danube Rivers, residents prepared for the rising water.

The Moderate Resolution Imaging Spectroradiometer (MODIS) on NASA’s Terra satellite observed flooding in central and eastern Germany on June 6, 2013 (top). For comparison, the lower image shows the same area on May 5, 2013. These false-color images use a combination of visible and infrared light to make it easier to distinguish between water and land. River water appears navy blue to black and vegetation is bright green. Clouds are pale blue-green and cast shadows.

On June 6, the Associated Press reported that floodwaters were cresting in Dresden, Germany, swamping much of the city but sparing the historic center. The Elbe River reached 8.76 meters (28.75 feet) that day in the area; the norm is 2 meters (about 6.5 feet).

Flooding had already peaked and left severe damage in the Czech Republic, northwestern Austria, and southern Germany, including Deggenfdorf, Passau, and Prague. However, satellite images of those areas have not been available due to persistent cloud cover. Visit NASA’s EOSDIS Worldview page and turn on the flood tool (under “my layers”) to observe false-color views of Germany and the rest of the world. Outlook for Next Week

Later next week the jet stream will take another long southerly detour from the mid Atlantic to northern Spain and back north to Scandinavia. Much cooler weather for NW Europe again in a run of Arctic winds with showers and bands of rain moving south. Becoming quite unsettled too over central Europe, Italy and the Alps with rain and thunderstorms. The highest temperatures down in the far south of Spain and across eastern Europe from Greece and Turkey north to the Ukraine. This weather pattern is expected to be the dominant circulation through the summer with cooler weather often spreading to western Europe and high temperatures and dry weather in the east. Damp, March-like chill will span much of western Europe this week, spreading over much of England, France and western Germany.

Daytime temperatures will top out 5 to as many as 10 degrees C (10-18 F) below normal in an area from London and Amsterdam to Paris, Frankfurt and Zurich. Persistent clouds with outbreaks of rain will only accentuate the chill.

Travelers to the region may need to pack some cold-weather clothes.

Thursday and Friday will have some of the coldest, rainiest daytime weather, having high temperatures little above 10 degrees C (50 F) in many parts of England, the Low Countries, France, Switzerland and western Germany. Normal highs this time of year are about 16 degrees C (16 F) in Amsterdam, 17 degrees C (63 F) in London and near 20 degrees C (68 F) from Paris to Frankfurt.

The rain-snow level will be unusually low, low enough at times for snow to fall in hilly areas from Great Britain to western Germany and the Alpine foothills of Switzerland and France.

Cool, unsettled weather may hang over western Europe well into next week as well.

Meanwhile, anyone looking for summerlike warmth need not look any further than eastern Europe, western Russia and even Scandinavia. The month of May thus far has been unusually warm over a wide area, and it is forecast to remain so into at least next week. Flooding in Central Europe a threat to reinsurers [ARTEMIS; 3 June 2013]

Flooding across Central Europe is reaching record levels in many towns and cities after torrential rainfall struck the region in recent days. The waters are still rising in some areas of Austria, Germany and the Czech Republic and it’s possible that a meaningful insurance industry loss from this flood event could also hit reinsurers in the region.

There are emergency operations underway in many towns and cities across the region. One of the most threatened cities is Prague, the capital of the Czech Republic where there are concerns that flood defences built after a catastrophic flooding event in 2002 may not be high enough.

European flooding in the same region in 2002 caused nearly $4 billion of insured losses, with much of that being passed on to the largest European reinsurance firms. This episode, which still has some time to play out and needs the waters to recede before the extent of damages can be understood, has the potential to create losses in the billions for insurers. It must be stressed however, that with rainfall continuing and rivers still rising it is not possible to forecast how high losses may or may not rise.

The meteorological service in Austria said that the region had experienced almost two months of rainfall in just two days, creating conditions where rivers are now swollen to bursting their banks as well as localised flooding from rainfall. Two of Europe’s largest rivers bisect this region, the Danube and the Rhine, causing states of emergency to be declared in towns and cities close to the rivers paths.

More rainfall is expected, according to the German Bavarian flood forecasting service, and it expects the river levels in the Danube will rise further possibly reaching record levels. However flood defences have been much improved in the region since the 2002 flood event.

Stocks of leading European reinsurers have dropped this morning, Munich Re fell 3.9%, Hannover Re 2.9% and Allianz 1.5% according to Bloomberg, while Reuters reported that Swiss Re dropped 2.1% and the STOXX Europe 600 insurance index dropped 1.6% in early trading. That index has bounced back a little now but remains down today.

Europe as a whole is exposed to major flood risks and the potential for losses in the region is extremely high. Many major towns and cities are situated next to large rivers and often the defences are not adequate for the 1-in-100 year type flood events.

Currently there are no outstanding catastrophe bonds with exposure to European flooding. That is something that initiatives such as PERILS AG’s inclusion of UK flood loss data hope to rectify in the future. European flooding is a peak peril that has the potential to cause insured losses of over $10 billion for a really serious event. As risk models and provision of loss data improves and becomes more widespread throughout the region it is surely only a matter of time before a European flood catastrophe bond comes to market.

The provision of industry loss data for flooding in Europe by PERILS will also allow instruments such as industry loss warranties to be transacted and private reinsurance contracts using industry loss triggers. In Central Europe particularly, as insured property values increase the need for better ways to transfer that risk is growing.

This current flood event in Central Europe should serve as a reminder to the reinsurance market that this is a peak peril and one which may become more damaging and prevalent as climate patterns change.

We’ll update you should the flood event become more serious in the coming days and once there is any visibility of potential insured losses from the event.