FEMA is preparing for a major event. Are these rumors true? Is this related to the New Madrid? [and from another] Is Something BIG Coming? Report: FEMA Just Quietly Activated Civilian Corps. June 10, 2016 http://newzsentinel.com/is-something-big-coming-report-fema-just-qu... We received reports last week of various employees, citizens and etc. heading down to Atlanta Georgia to either the CDC (Center for Disease Control) and the Center for Community Preparedness (FEMA). Federal Emergency Management Agency is actually activating its Civilian Corps. This is primarily a group of current and former government and military people, many with various training backgrounds to broad to cover here. While this group is unarmed, they are generally drafted from the fighting branches of the US Military, medical and communications. We were informed that several companies in Minnesota responded large numbers of their own veterans heading south. [and from another]2018 FEMA Project Deadline Moved up to June 30th, 2016 - Why? June 16, 2016 http://allnewspipeline.com/June_30_Deadline_Moved_Up_To_2016.php It appears that FEMA is activating their highly secretive 'civilian corps' in the Atlanta, Georgia area. We should expect electricity, gas and water could be shut down. Food supplies will be hard to get. What this exactly is, we don't know but we know that things are happening very, very quickly in the United States. [and from another]https://www.fema.gov/region-iv-al-fl-ga-ky-ms-nc-sc-tn Region IV covers Alabama, Florida, Georgia, Kentucky, Mississippi, North Carolina, South Carolina, and Tennessee. 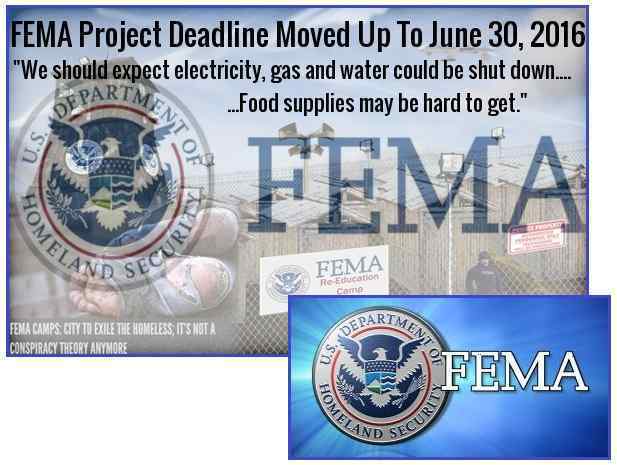 What would cause Homeland Security to move the planned re-education of their civilian corps from June of 2018 to this month, June of 2016? This is less than a month’s notice for these retired individuals, and bespeaks a sense of urgency. It would not be the hurricane season, which has been modest and is a known entity. It is not terrorism threats, which would be handled by the local police or National Guard or the US Military. It is not a pandemic, as even the Ebola crisis a couple years ago did not involve FEMA. It is obviously a pending New Madrid crisis of an immense magnitude.

Centered in the Southeast between the course of the Mississippi River and the East Coast, training in FEMA’s Region 4 is positioned between the fault lines expected to rupture when the New Madrid goes. The New Madrid fault line runs up the Mississippi all the way to Chicago, and the East Coast Fault Line runs from Alabama through upper Florida and thence up the East Coast to Boston. Has Homeland Security received information that the New Madrid is ready to rupture? The bow stress in the N American continent is palpable, and there is ample geological evidence available to federal agencies.

As we have stated, the stress on the N American continent will be relieved by the New Madrid rip, not by any other adjustment. The N American continent does not have numerous internal fault lines that can relieve the stress, nor can the continent roll due to its flat top. What other emergency that FEMA might be called to address would paint the scenario that “electricity, gas and water could be shut down. Food supplies will be hard to get.” This sudden re-education of the civilian corp may or may not get into the major news outlets, or may be deemed too alarming and suppressed to avoid sparking panic in the public. Alternatively, the US government may choose to share the evidence they have been collecting, showing for instance an extreme uptick in EMP activity, particularly in the Southeast US.

Received via email and herein shared.

This incident happened this past Sunday, June 12 and 5 days later is still niggling my brain. Even though I have no empirical evidence, I feel compelled to share this info with you after reading the FEMA readiness post on the ning.

I was walking my dogs at 5:45 p.m. when I heard a noise from the earth. I am 54 and I have never been witness to the likes of this sound and I would not have heard it this time had I been indoors. You know how a pot-lid will reverberate and spin like a top when placed rim-down on a table? That is what the noise sounded like but on a gigantic scale with snapping sounds thrown in the mix too.

All three times were in the same general area but different precise locations--it kinda jumped around the neighborhood. Each incident lasted for at least 15 seconds and the sound filled the atmosphere like the trumpeting sounds except these sounds did not come from the skies.Two other friends heard a different sound about 20 minutes before the snap and crackle I heard. They both said it sounded like a transformer but not the humming, vibrating, electrical transformer sound.  They couldn't describe exactly how it was different--just that it wasn't the usual electric hum.

The power went during the course of this so my neighbor reports the outage
through the internet on his phone. Reliant/Centerpoint indicates that power will not return until 8 p.m. They also give no reason or speculation or explanation of the cause.  The map of the outage area was a "significant" portion of Harris county. When power came back on a little after 7 p.m. I was unable to locate ANY info on the WWW. The outage map is supposedly in real-time so it had already been wiped clean. It is possible I have not entered the correct combination of words during multiple internet searches, but I still get no hits when I google.  Local nightly news did NOT cover the outage either. This is strange because I live in the extreme southern portion of the county--25 miles SE of Houston proper. I chatted with a lady on Tuesday and she said her brother lost power too. They were both puzzled by the absence of media attention. I don't know the distance from my house to his house as the crow flies, but via interstate he lives at least 30 miles north and west of me. An outage in only 10% of Harris county would affect at least half a million people! From what my neighbor said about the map, the outage covered more than 10% of the county. Sounds newsworthy to me.

I am not posing a question for the Zetas because I know what is happening--New Madrid activity is increasing in frequency, intensity and square mileage. If you and the Zetas feel I am wrong or if they want to elaborate, I leave it to your good judgement.