After the 8.4 on South of Mexico there are 20 Buoys in event mode! [and from another The buoys show this was a N American Plate quake, all the way. Will this expedite the New Madrid? [and from another M 8.0 - OFFSHORE CHIAPAS, MEXICO - 2017-09-08 04:49:14 UTC http://https://www.emsc-csem.org/Earthquake/earthquake.php?id=616600 [and from another 8.0 earthquake strikes coast of Mexico http://abc7.com/80-earthquake-strikes-coast-of-mexico/2390046/ An 8.0-magnitude earthquake struck off the coast of Mexico Thursday evening, causing people in the capital city to flee from buildings. While the strong quake hit near the coast of Chiapas, Mexico, the National Weather Service tsunami alerts tweeted that a tsunami was not expected to hit the coastal areas. [and from another http://news.trust.org/item/20170908053353-zsjng The quake was apparently stronger than a devastating 1985 tremor that flattened swathes of Mexico City and killed thousands, but this time damage to the city was limited. The epicenter of the quake was in the Pacific, 54 miles southwest of the town of Pijijiapan in the poor southern state of Chiapas, 43 miles deep. The quake triggered waves as high as 2.3 ft in Mexico. [and from another http://www.dailymail.co.uk/news/article-4864392/Massive-8-0-magnitu... Earthquake was felt across Mexico and as far as Austin, Texas more than 1,300 miles from the epicenter. The quake hit offshore in the Pacific, the US Geological Survey said, putting the magnitude at 8.1. Mexico's seismologic service gave a magnitude of 8.4, which if confirmed would be the most powerful ever recorded in this quake-prone country. [and from another https://www.facebook.com/pueblaenlineacom/photos/a.587579341322191.... The sea is retreating in Chiapas MX. [and from another https://www.rt.com/news/402432-earthquake-lights-mexico-city/ [and from another http://idahostatejournal.com/news/local/earthquake-swarm-won-t-stop... There have now been 141 earthquakes since Saturday night 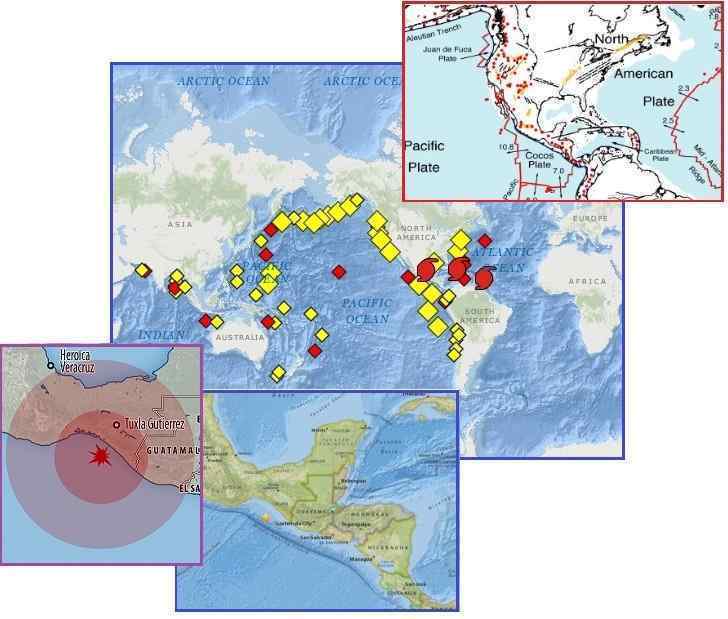 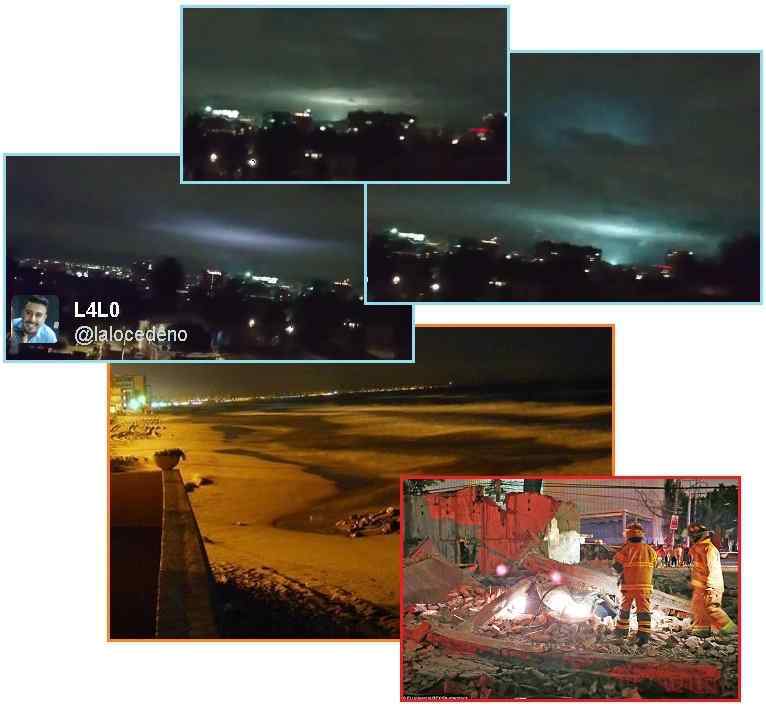 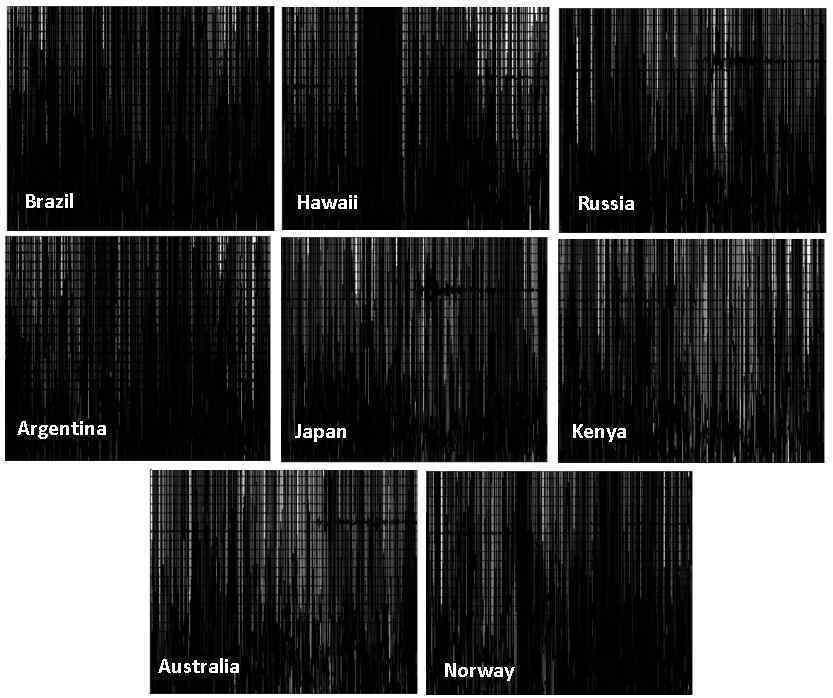 The quake on September 8, on the border between the N American and Cocos Plates, was hardly a magnitude 8.4 as it was felt in Austin, TX. Magnitude includes jolt as well as distance, and buoys went into alert mode up the West Coast of the N American Plate, across the Aleutian Islands and down into Japan – all on the N American Plate. In truth, this was likely a magnitude 12 or larger. Of course the USGS lied about the magnitude. This quake was indirectly due to the S American Roll.

We have repeatedly described the N American Plate bow, wherein the Aleutian Islands are pulled toward the tip of Mexico.  There are two geological factors involved. One is that the N American Plate cannot roll, as it is a flat top where its border runs through the Arctic. S America and Africa can roll, because their plates have rounded edges, but N America is stuck in place, forced into a bow. The second factor is the S American Roll, wherein Mexico is shoved to the West as the Caribbean Plate is shoved to the West. The repercussions of this large adjustment on the border of the Cocos and N American Plate are many.

The bow has tightened. More inland quake swarms will occur, and are already being recorded. The New Madrid Fault Line of course has been put under increased stress from the diagonal pull. We predicted that the 7 of 10 for the N American Plate would start with moderate quakes of magnitude 7 or so, which in today’s climate of USGS lies would be under declared to be under a magnitude 5. These early quakes would tend to proceed up the Mississippi and increase in magnitude until the big rip occurs. 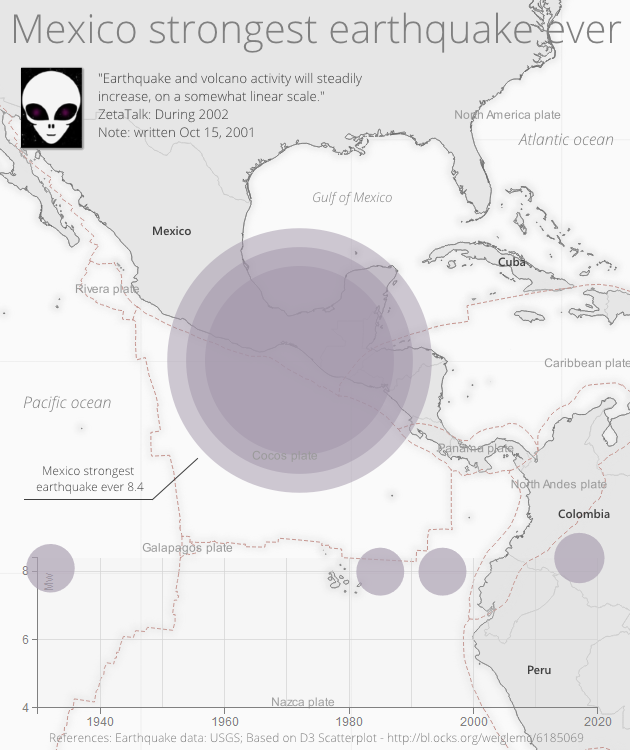 8 September, 2017. "An earthquake of magnitude 8.1 struck off the southern coast of Mexico late on Thursday, according to the US Geological Survey. A number of buildings suffered severe damage in parts of southern Mexico. Some of the worst initial reports came from Juchitan in Oaxaca state, where sections of the town hall, a hotel, a bar and other buildings were reduced to rubble.

Rescue workers laboured through the night in badly-affected areas to check for people trapped in collapsed buildings. President Enrique Pena Nieto told reporters the earthquake is the biggest in Mexico’s history."