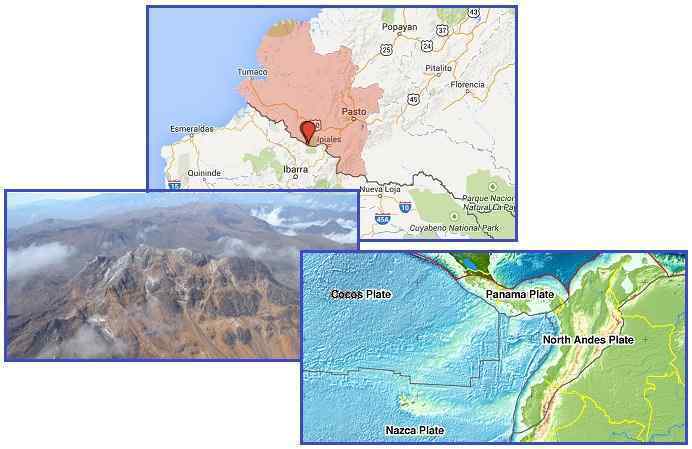 Here is the newest volcano readout in case you might need it. This explains how a 160K year old volcano is about to erupt in Chili. Can the Zeta's explain how that is happening since it is my understanding that the volcanoes we should be expecting to see erupting are 10,000 years old or younger? Maybe the announcer does not know his stuff on the ages of these volcanoes. [and from another] http://colombiareports.co/colombia-border-volcano-can-erupt-couple-...  Colombia-Ecuador border earthquake sparks concern of possible imminent volcano eruption. October 21, 2014. Colombia’s Geological Service have changed the alert level of two volcanoes from yellow to orange. The two volcanoes are Cerro Negro and Chiles, both active on Colombia’s southern border with Ecuador. The orange alert level is defined by the Geological Service as “probable eruption in term of days to weeks.” Neither one of the volcanoes have erupted in the past 160,000 years.

We have stated that the forthcoming Pole Shift will be devastating, the level of devastation not seen for the past 50,000 years, not in over a dozen passages. The anticipated devastation is one reason the Council of Worlds has scheduled the Earth’s Transformation into a world for those in the Service-to-Other, as the death rate will sculpt the Earth’s population, created an anticipated death rate of 90% worldwide. This of course speeds the Transformation, at the hand of nature. Why is this passage different?

Each passage differs as when Planet X does not encounter planets in its path, it can zip through the solar system quickly. This time around, the Earth and her sisters – Venus and the Dark Twin – arrived promptly to slow that process. The Earth is now trapped in front of Planet X, and all of this creating a violent daily wobble for the Earth and planetary battering. Every Pole Shift moves the crust to some degree, and during these moves the plates are positioned for the next passage. At present, the ongoing S American roll will progress further than in the past, due to the Indo-Australian Plate able to tilt and sink India further than in the past.

@ Andre the Zetas have explained that these earthquake swarms in north western Nevada are being caused by water sloshing underground as a result of the North American plate bowing, not magma movement

Do these quake swarms mean magma is moving around? http://www.ktvn.com/story/27297355/ongoing-earthquake-swarm-in-nort... A swarm of earthquakes in a sparsely populated area of far northwest Nevada that began on July 12, 2014, has increased in intensity over the past several days. This activity is located about 40 miles southeast of Lakeview, Ore., and 40 miles northeast of Cedarville, Calif. During the past three months the Nevada Seismological Laboratory, in collaboration with the U.S. Geological Survey and seismic networks in Washington and Oregon, has recorded 42 earthquakes larger than Magnitude 3, and about 550 earthquakes larger than Magnitude 2. Three Magnitude 4+ events have occurred since Oct. 30, with the largest event of the sequence, Magnitude 4.6, at 11:23 p.m., Nov. 4, 2014 (PST). [and from another] http://en.wikipedia.org/wiki/Great_Basin The Great Basin is the largest area of contiguous endorheic watersheds in North America. The Great Basin Divide separates the Great Basin from the watersheds draining to the Pacific Ocean. Most Great Basin precipitation is snow, and the precipitation that neither evaporates nor is extracted for human use will sink into groundwater aquifers, while evaporation of collected water occurs from geographic sinks. Most of the basin experiences a semi-arid or arid climate with warm summers and cold winters. 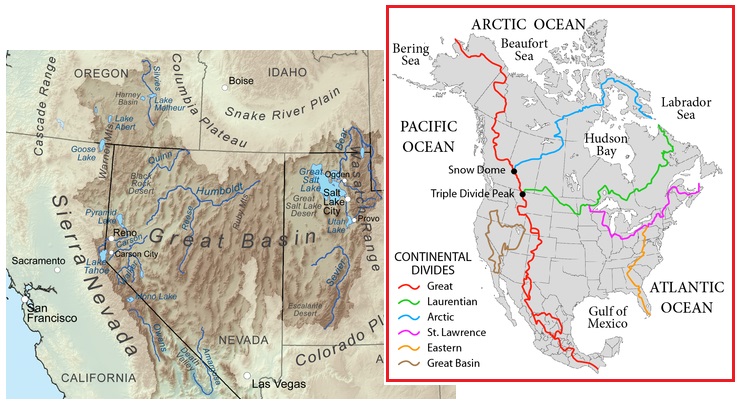 The Great Basin holds underground water, which does not drain to the Pacific but seeps underground. It is subject to mountain building, being on the western slope of the Continental Divide. Quake swarms occur most often in regions where there is underground water, which gets trapped and then later released as the rock layers slide during either stretch activity or mountain building activity. The water is essentially sloshing around underground, each time causing a minor quake. At times such activity will cause new lakes to form suddenly on the surface, or drain an existing lake. This is a factor of the N American bow, and the mountain building ongoing in the area, not magma movement.