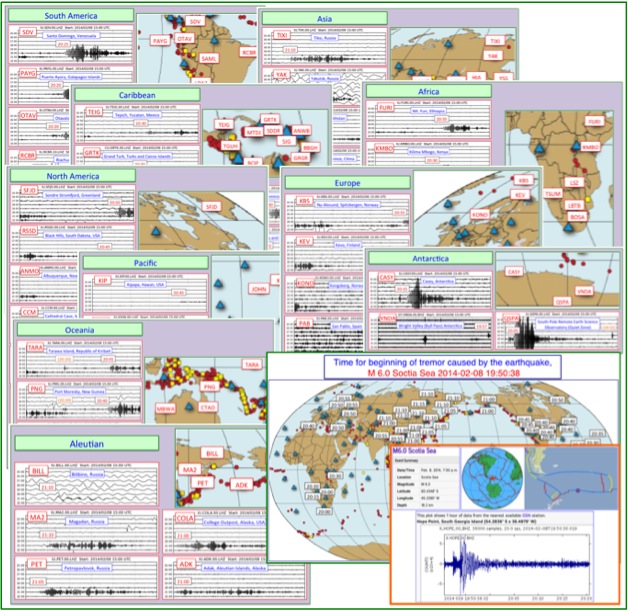 The Scotia Sea earthquake of 2014-02-08 was M 6.0, not huge, but the distinct tremor was recorded at almost all GSN stations of the world. It seemed unusual. Per Zetas, the Scotia platelet is in the heavy traffic lane.

I show each GSN heliplot of 84 stations over the world - South America, Antarctica, Caribbean, North America, Pacific, Oceania, Africa, Europe, Asia and Aleutian - with the time for beginning of the tremor.

And I show relevant information about Scotia Plate from ZetaTalk or Nancy's Newsletter.

Besides, I noticed that JOLT, not tremor, was recorded at some stations in Antarctica, Africa and South America some days after the earthquake and I am going to post it as a new blog. 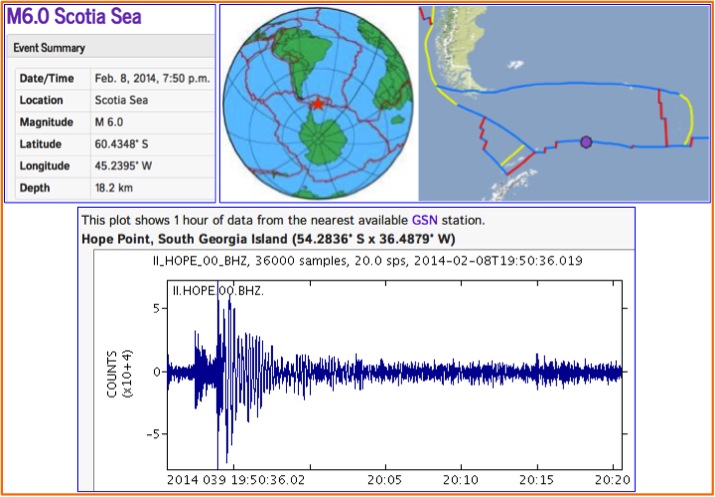 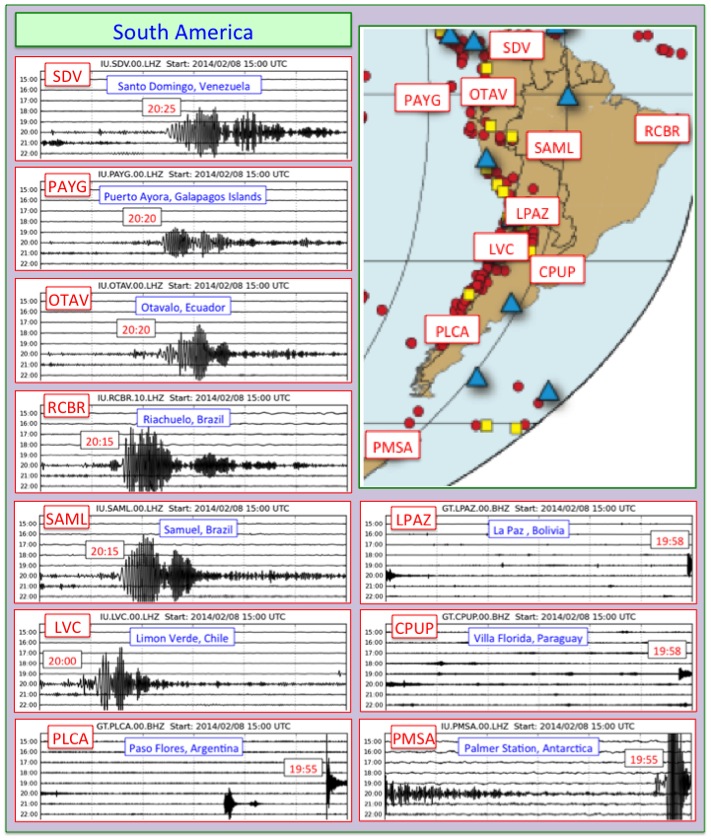 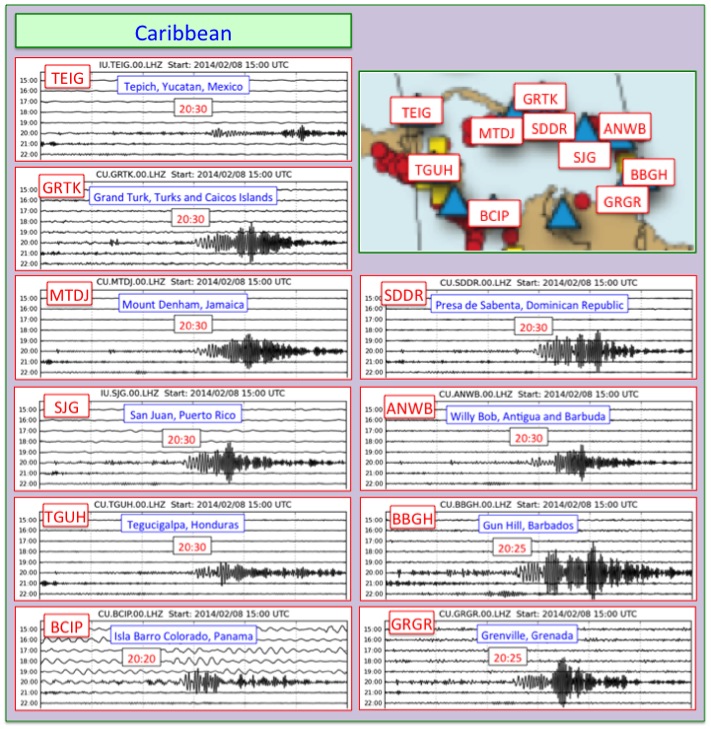 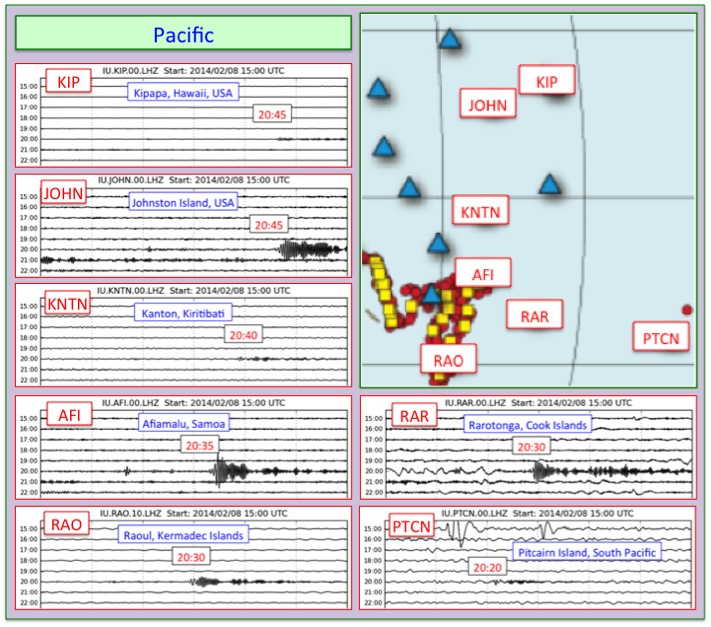 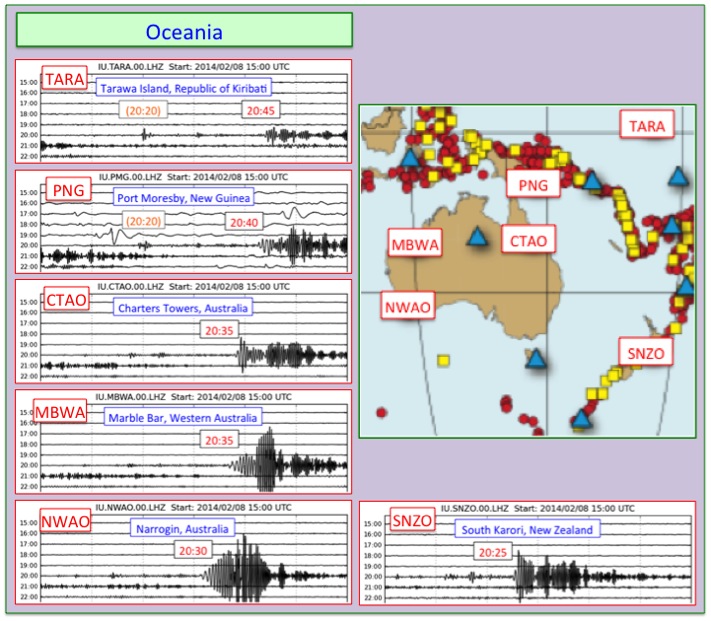 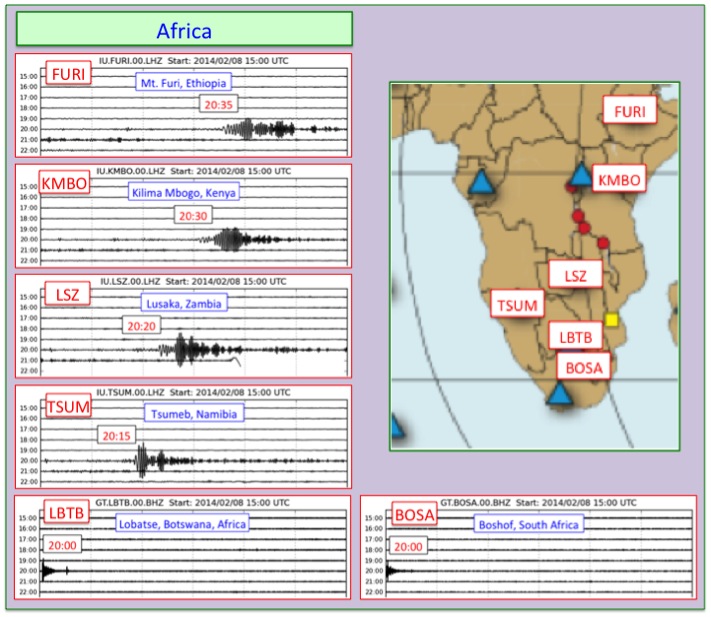 The Earth is composed of land masses called plates. Most quakes occur along the borders of these plates, where the plates touch one another, or on internal fault lines within the plate. For instance, the New Madrid Fault line is internal to the N American Plate. The 14 plates of the world are as follows: The S American Plate, the Scotia Plate to the south, the Nazca Plate just to the west of Ecuador, the N American Plate, the Juan de Fuca Plate just to the west off the coast of Oregon, the Cocos Plate to the west of Mexico, the Caribbean Plate, the great Pacific Plate, the great Eurasian Plate, the Philippine Plate, the Indo-Australia Plate pushing under the Himalayas, the Arabian Plate, the African Plate, and the Antarctica Plate.
On November 23, 2008 quakes in the range of 5 - 7 magnitude occurred within or on fault lines touching 10 of the 14 earth plates, as shown on this IRIS map. … What is remarkable about this new quake pattern is how all parts of the globe seem to be affected. An adjustment in one place almost immediately creates adjustments elsewhere, within the same day. The Zetas warned that the plates were getting slippery, with the rock fingers that normally create resistance along fault lines now worn off.

ZetaTalk Warning 7/19/2008: We have mentioned that the Earth plates have loosened up, so that they can slide against each other more readily and slide further than before since the rock fingers that caused the fault lines to cling to each other have been broken off. We have also mentioned that quakes have started to increase in magnitude and frequency almost exponentially.

Since December 15, 2006 the Zetas have warned that the Earth's plates had become slippery, the many fingers along fault lines holding the plates in a fixed position having been broken off during the jerking motion that the daily wobble had imposed on the Earth. They stated that earthquakes would not only become more frequent, and stronger, they would also cause the Earth's plates to move further during each major quake.
ZetaTalk Prediction 12/15/2006: The effect on the Earth's plates is to increase continental drift, or rip as we prefer to call it. And after months and years of this type of tugging, the edges of the plates have worn smooth, rock fingers breaking off, so rapid and dramatic movements of the plates are now possible. What will happen to the Earth, wobbling in an increasingly forceful figure 8 and being jerked back by a twice daily tug on the Atlantic Rift and body slammed by the other planets in the cup when they come too close, invoking the gravity repulsion force? Certainly her plates will move, and where this occurs in subduction zones, jolting quakes and volcanic activity will follow. And where this occurs in stretch zones, the sinking and thinning ground will create chaos for cities or infrastructure above and will also allow magma to bubble up to the surface. The quakes are quickening.
Dramatic evidence of this appeared on the IRIS charts on March 12, 2009. The South American plate had quakes dotted all around its edges - to the west, along the Andes, the border with the Nazca Plate; to the north, in Columbia, along the border with the Caribbean Plate; to the east, in the central Atlantic, along the border with the African Plate; and to the south, along the border with the Scotia Plate. The South American plate, as a whole, rolled! 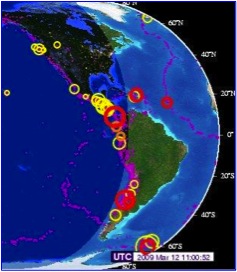 We have predicted new land to emerge when the Antarctic Plate tips up between the tip of S America and S Africa, due to pressure from the compressing Pacific plates. This of course would have consequences for the Scotia Plate, nearby. The Scotia Plate is rising at the Sandwich Islands, being pushed down on the other side of the plate. This trend will continue, and thus that tiny strip of land at the tip of S America that rides on the Scotia Plate will lose elevation and sink below the waves during the hour of the pole shift.

… We mentioned during the 8 of 10 discussions that there would be some shifting of plates during the 8 of 10 such that the alignment of continents to each other would change. The Antarctic Plate is one that is relatively free to move, not being locked on any side.
Due to the S American roll, which is caused by the spreading Atlantic, there is a natural tendency of the Antarctic Plate to roll clockwise, pushing the tip of S America toward Africa. We have mentioned that the compression in the Pacific Plates tips the Antarctic Plate also, which ultimately results in new land emerging between the tips of S America and Africa. As this roll of the Antarctic Plate begins, it will also tend to push under the Indo-Australian Plate, which is in any case lifting on its eastern edge and thus providing an opening for the Antarctic roll. If such a nudge up occurs, the water atop the Indo-Australian Plate will slosh, and this is what occurred on August 19 near Tasmania.

We predicted from the start of the ZetaTalk saga that new land would emerge between the tip of S America and S Africa during the Pole Shift. We stated that the Antarctic Plate would shift and tip, reacting to pressure from the compressing Pacific and taking advantage of an opening during the spreading of the Atlantic. This drama starts early, like all the Scripted Dramas of the plate movements. The Antarctic Plate has begun to turn, pushing the tip of S America to the East, pushing under the rising eastern edge of the Indo-Australian Plate. Thus where Antarctica is positioned today is not its final destination. The Scotia platelet is in the heavy traffic lane.
Why would the NOAA buoys all wink out when these Scotia quakes occurred? The establishment is very nervous about tsunami panic during plate movements, and wants to be sure that tsunami is indeed a threat before sounding the alarm. The quakes were on the underwater Scotia platelet, at the frozen tip of S America, and until a threat to populated coastlines was confirmed undue panic was to be suppressed. The buoy site was deliberately taken down after the large magnitude 7.8 quake on November 17 as indeed the buoys up and down the Atlantic were signaling activity. First the Atlantic buoys were taken offline, and then the entire NOAA site taken down as questions were being raised.
What caused the Atlantic buoys to register water depth changes, if not a tsunami? A tsunami wave is a large amount of displaced water on the move, as a plate has dropped or risen permanently so the water must move to equalize. But after a large quake, a significant plate movement, there is a type of bobbling in the plates affected, which does not indicate a permanent change in water depth but only a temporary bobbling reaction to being bumped. The S American and African plates are now a tad further apart, the Atlantic Rift wider, the Scotia platelet broken free from its attachment to the Antarctic Plate, and the Antarctic Plate now increasingly free to continue its roll and eventual tilt.

On November 15, 2013 the Scotia Sea had a magnitude 4.4 quake followed by a magnitude 6.8 on November 16, 2013. Then in short order 10 quakes in the magnitude 4-5 range occurred, followed by a magnitude 7.8 on November 17, 2013. Then for the next two days 32 aftershocks in the magnitude 4-5 range occurred.  What was most peculiar was the shutdown of the NOAA buoy system right after the magnitude 7.8 quake. First the Atlantic buoys went out, although the Pacific was still working. Then the site went down for more than a day. There was no technical explanation for any of this, and since the data is picked up by satellite, that the entire Atlantic failed while the Pacific and the rest of the world did not was even more peculiar. Per the Zetas, the outage was deliberate on the part of the establishment, to avoid tsunami panic.

Why the quake swarm on the Scotia platelet? Per the Zetas this relates to the turning in place that the Antarctic Plate is doing, as it reacts to the compressing Pacific and the spreading Atlantic. The Antarctic Plate is on the move. This issue first emerged in Issue 366 of this newsletter in September, when high waves in Tasmania were explained. From the start of the ZetaTalk saga, the Zetas have predicted new land would rise between the tip of S America and S Africa. This process is gradual, though it primarily occurs at the hour of the Pole Shift.

Why were the buoys signaling water depth changes if tsunami waves were not being generated during the Scotia platelet quakes? Per the Zetas, the nearby plates were reacting by bobbling in place, which did not involve a permanent displacement of water. Thus when the quakes stopped, the NOAA site came back online, complete with its Atlantic buoys. 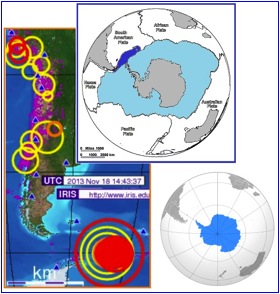 ZetaTalk Insight 11/23/2013: What caused the Atlantic buoys to register water depth changes, if not a tsunami? A tsunami wave is a large amount of displaced water on the move, as a plate has dropped or risen permanently so the water must move to equalize. But after a large quake, a significant plate movement, there is a type of bobbling in the plates affected, which does not indicate a permanent change in water depth but only a temporary bobbling reaction to being bumped. The S American and African plates are now a tad further apart, the Atlantic Rift wider, the Scotia platelet broken free from its attachment to the Antarctic Plate, and the Antarctic Plate now increasingly free to continue its roll and eventual tilt.