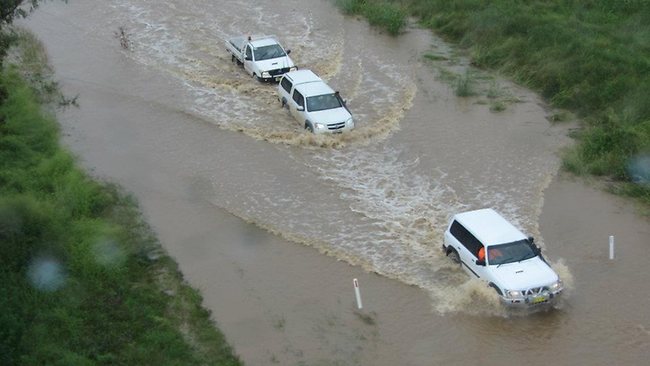 AN evacuation order has been issued for residents of Walgett, as more than 5000 people remain isolated by floodwaters across northern New South Wales.

Power has been lost at Namoi Village at Walgett, sparking the NSW State Emergency Service (SES) to tell residents of the village to evacuate their homes by 7pm (AEDT) today.

"You can choose to go to friends or relatives," the SES said in a statement today.

"Alternatively, temporary accommodation can be arranged for you and other assistance provided."

Across Walgett, where 322 people were isolated, the river continued to rise and was predicted to peak at 13.5 metres tomorrow, the SES said.

"It is expected that over the next 48 hours, floodwater from the Namoi River will reach the Castlereagh Highway."

The towns of Grawin, Cumborah, Lightning Ridge and Collarenebri remained isolated from Walgett and moderate flooding continued further north of Walgett at Mungindi.

River waters were starting to fall slowly at the Barwon River at Collarenebri, after peaking at 8.33m yesterday morning, causing moderate flooding, the SES said.

The Gwydir Highway remained closed in both directions, with access to Moree and Walgett cut off.

The SES was conducting flood operations in other parts of the state, particularly Moree, Namoi, Bourke and surrounding areas.

SES spokesman Dave Owens said floodwaters continued to be monitored as they rush downstream from Queensland.

"It really is a moving environment," he said today.

"As the water moves south those townships that have been isolated will be accessible again.

"But those townships further downstream are likely to become isolated.

7 of 10 TILTING; MUCH of north-western NSW is underwater!!! Austral...

7 of 10 SINKING and TILTING; Australia: Flooding across south-east ...

And where do they evac them TO? Half the country is flooded, or so it seems. Good to watch closely as in time Australia will have a challenging evac situation on their hands, during the Pole Shift. What will they do during the Last Weeks, I wonder? Very much in the hands of man, that.