Extreme weather link 'can no longer be ignored'

The Independent today reports that climate scientists are increasing taking a harder line as the facts no longer line up with previous assertions that extreme weather events are within the norm of statistical anomalies.

“There is strong evidence if you look across the world that we are seeing an increase in heatwaves and floods and droughts and extreme rainfall and extreme temperatures,” Dr Stott said. 110 degree high temp and no water in Shawnee, Oklahoma, due to yet another water main break.

Check it out.  Extreme weather is mentioned in the below article, but I cannot be the only ning member who thinks such a huge, concrete house in the Ozarks is all about the pole shift and the 8 of 10 events and not much more.  How often do Americans build a concrete mansion, especially those who can afford any construction materials they desire?  Almost never, that I know of. 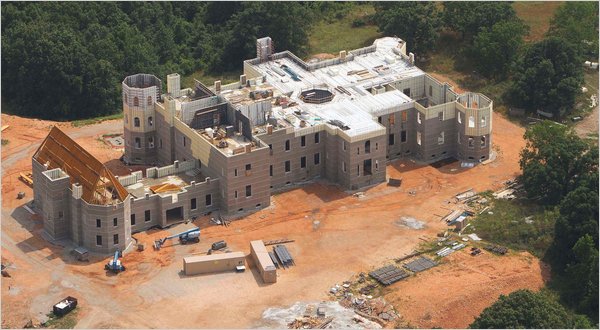 When construction is complete, Pensmore will have 72,000 square feet of living space.

KANSAS CITY, Mo. — There are some who insist the giant concrete structure a few hours south of here is actually a military bunker. Others speculate it is a secret facility designed to house extraterrestrial visitors. And still others suspect, more or less plausibly, a low-profile getaway for local boy Brad Pitt and Angelina Jolie.

Neighbors and local officials have heard them all. But implicit in all these rumors about the outlandishly grand building emerging from the rural hills of the Ozarks is this nagging question: Why there?

The building, called Pensmore, promises to be one of the largest residential homes in the country when construction is completed — 72,000 square feet of living space that includes 13 bedrooms, 14 bathrooms and enough amenities to entertain a small city.

But instead of appearing in New York or Florida, where lavish living requires no explanation, the mansion was built in a thickly wooded plot of land in Christian County, halfway between Springfield and Branson. The nearest major landmark is a cathedral that bills itself as the smallest in world.

“It’s really strange, and we’re thinking something’s up,” said Michele Grider, who lives just down the road. “If there was a nuclear thing they could hide a bunch of important people there.”

The owner, Steven T. Huff, 60, has heard all the “goofy speculation,” as he calls it. His background — he sold the company he founded that makes software for military and intelligence agencies to Textron several years ago — has encouraged the rumors. But he said that his current work prompted him to build such a large second home....

The house — officially a single-family residence — has been under construction for nearly two years, and a recently posted Web site shows its progress. There are probably another two years to go before it is completed, which has irritated some neighbors who say the work has disrupted the serenity of the area and has cut off what used to be prime hunting grounds. Mr. Huff would not reveal the cost. (Though the purchase price of the land is not public, Christian County records show the more than 500 acres, historically used for logging and grazing cattle, was appraised at just over $50,000.)

Mr. Huff, a longtime resident of Virginia, chose the site on Woods Fork Road because it is just hours from his boyhood home. Also, he said building in that part of the country would help him show how the technology handles both hot and cold weather and even tornadoes.... http://www.nytimes.com/2011/07/19/us/19ozarks.html?hpw

And this in South America, effecting 5 countries:

"Five of South America’s major fruit-producing countries have witnessed an historic cold snap over the last week, including a snowstorm in the Argentine citrus region of Tucumán. Low temperatures were registered in Brazil, Uruguay, Argentina, Chile, Peru and Bolivia. The blizzard hit Tucumán on Friday in conditions not seen since 1920, while the Brazilian state of Santa Caterina recorded a wind chill of -25°C (-13°F). It will take time before the full consequences for crops can be seen across the continent, but Brazilian press reported Santa Caterina’s agriculture and livestock were seriously affected and 80 people have died."