Is this just a scientific study of known data, or is this another part of the announcement-of-sorts.  The article mentions possible increase in earthquakes starting next year, and a hint of rotation slowdown.  Will Zetas comment? [and from another] Is the establishment expecting the 7 out of 10 events to unfold in 2018? Can the Zetas comment on this article? [and from another] This article mentions a pole shift and the Earth wobble. I noticed a pattern. They don’t cite ZetaTalk, but concepts such as polar shift, axis tilt, and Earth wobble are being mentioned more often! Due to slowing rotation? [and from another] https://www.livescience.com/60989-slow-earth-rotation-triggers-eart... A tiny slowdown in Earth's rotation next year could trigger more earthquakes than usual. Past periods of slow rotation over the last 100 years have coincided with more earthquakes than average, according to research presented last month at the annual meeting of the Geological Society of America. The basic idea is that as the Earth's spin slows slightly, the equator shrinks. However, tectonic plates don't shrink as easily, meaning the edges of the plates get squeezed. Although this amount of squeezing isn't huge, it does put added stress on plate boundaries that are already under stress, where earthquakes are more likely. [and from another] https://www.yahoo.com/news/world-turns-more-slowly-face-051509504.html More powerful earthquakes could rock the globe in 2018 because of infinitesimal changes in the speed of the Earth’s rotation. A minuscule slowing of the Earth’s rotation over years, which can extend the length of a day by a millisecond or more, appears to be linked to an increase in major quakes. Historical data since 1900 clearly reveal a “strong” link between major global earthquake activity and a slight slowing of the Earth’s rotation for five or six years. [and from another] https://www.theguardian.com/world/2017/nov/18/2018-set-to-be-year-o... Scientists have warned there could be a big increase in numbers of devastating earthquakes around the world next year. They believe variations in the speed of Earth’s rotation could trigger intense seismic activity, particularly in heavily populated tropical regions. [and from another] https://qz.com/1133304/as-earths-rotation-slows-2018-could-see-a-sp... The Earth’s rotation is known to go through regular decades-long periods in which it slows down and speeds up. Even seasonal changes, like a strong El Niño, can affect the planet’s rotation. [and from another] http://www.dailymail.co.uk/sciencetech/article-5103611/Mysterious-b... Residents in Alabama were left baffled last week when a loud boom resounded across much of the state. This year alone, similar noises have been reported 64 times this year, in locations including Michigan, Lapland, St Ives, Swansea and Yorkshire. [and from another] https://www.rt.com/news/410354-2018-earthquake-surge-risk The theory goes that the slowdown creates a shift in the shape of the Earth's solid iron and nickel "inner core" which, in turn, impacts the liquid outer core on which the tectonic plates that form the Earth's crust rest. Their study looked at all earthquakes registering 7 and up on the Richter scale since the turn of the 20th century. In this timeframe, the researchers discovered five periods of significantly greater seismic activity occurring approximately every 32 years. The last slowdown began four years ago. [and from another] https://en.wikipedia.org/wiki/Leap_second Between 1972 and 2012, a leap second has been inserted about every 18 months, on average. However, the spacing is quite irregular and apparently increasing: there were no leap seconds in the seven-year interval between January 1, 1999 and December 31, 2005, but there were nine leap seconds in the eight years 1972–1979. [and from another] https://earthquake.usgs.gov/earthquakes/browse/stats.php 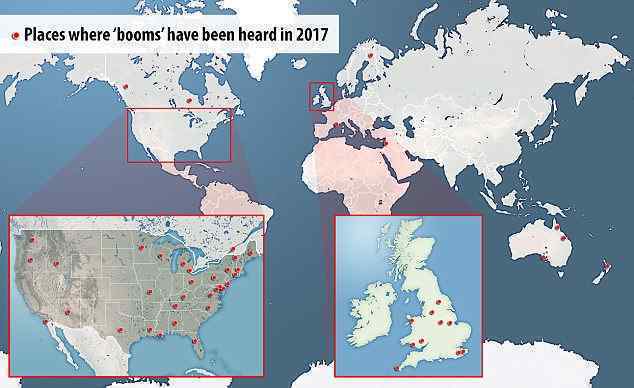 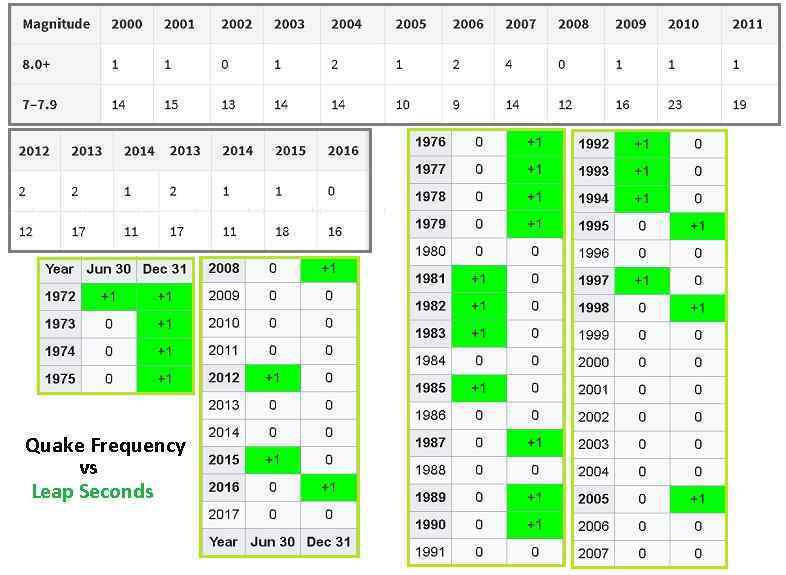 Once again we have current Earth changes such as plate movements and earthquakes ascribed to “anything but Nibiru”, as Nancy likes to say. Now the increase in earthquakes is supposed to be caused by a slight global slowdown, based on statistics from the past. How nebulous is this? Researchers can ascribe earthquakes happening anywhere in the world, in any Richter scale, with any frequency over a period of 4-5 years and decide this is due to a miniscule slowdown of a millisecond in rotation. Never mind that the numbers don’t line up.

Leap seconds have been regularly added to the world’s clock, less frequently in recent years, yet now we are to believe that 2018 will be a year of increased earthquakes due to such a slight slowdown. This is known in science as searching for facts to line up with a theory, and discarding any facts or logic that does not fit the theory. Meanwhile, odd booms are heard from snapping rock in the stressed North American Plate and where the UK is being pulled down into the Atlantic – all this caused by the 7 of 10 plate movements drive by Nibiru’s approach.

Only the admission that Nibiru is indeed here and steadily approaching will connect the dots, but the media and the terrified establishment in control of the media will always have some excuse for the Earth changes. To date we have had the earthquake increase due to fracking or more sensitive seismographs, the Earth wobble due to the Arctic being more ice free than the Antarctic so the globe spins like a top out of balance, red dust in the skies due to NASA sending up such dust clouds into the ionosphere to measure the jet stream, and anything not covered by those lies due to claims about the Sun or Global Warming. Anything but Nibiru.