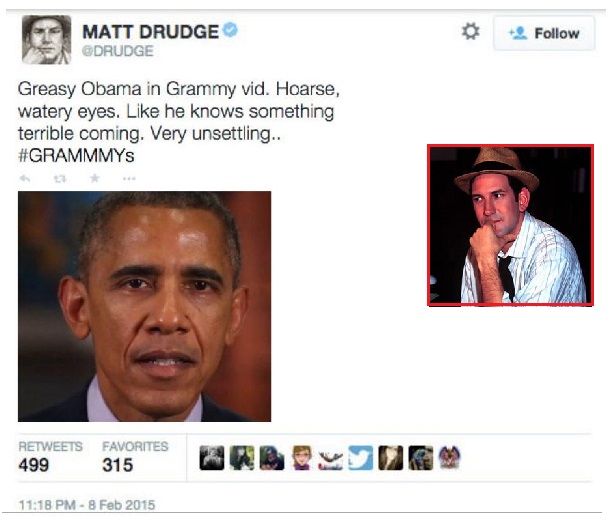 Drudge has the reputation of being the first to know. Is the announcement about to be allowed? Drudge is doing more than commenting on Obama's appearance. He is cluing his friends in that the jig is up! He did this once before with a tweet, "Have an Exit Plan" which the Zetas said was telling his ultra-right buddies that they could not stop the announcement. All efforts had failed. [and from another] http://www.shtfplan.com/headline-news/ominous-tweet-from-matt-drudg...  Arguably one of the most influential people in global media, Matt Drudge is known for his breaking stories and connections to Washington politicos. It is said that he often drives the news cycle with over 1 billion monthly readers, many of whom work in politics and media. When Drudge says something people listen, because if there’s anyone who might get the heads up about events before they become public it’s him.

What is Drudge signaling in this tweet? He outright states that Obama “knows something terrible coming” and uses the word “unsettling”. This type of cryptic coded warning had been used before by Drudge a year ago, when he stated without explanation that his readers should “have an exit plan”. We stated at that time that all attempts by the cover-up crowd to defray the announcement had failed, and this was the substance of the Drudge warning. The announcement, scheduled for October 20, 2014, appeared to be on schedule. Although this date was missed, once again blocked by those controlling the media, the Council of Worlds has now gone to war with the cover-up crowd.

Though the public is not privy to what goes on behind closed doors or in the halls of power and can only watch the carnage when key banks or media outlets suffer setbacks, the Council of Worlds will certainly win. From the Swiss Franc unpegging from the Euro to HSBC prosecution to Netanyahu blunders to the Sonny hack to Redstone seemingly resigning from CBS and Viacom to the influential Brian Williams losing his position at NBC to a former IMF chief caught in a prostitution scandal to Prince Andrew caught in a pedophilia scandal to Blair’s double dealing the elite blocking the cover-up are being damaged. The only question is when.

We described what the Council of Worlds is doing to the elite as akin to Chinese water torture. It is incessant, and will not stop until the goal is met. The elite know this and have started turning against each other, and as most are solidly Service-to-Self this can get vicious. There is no loyalty, no partnership that stands, no certainty, and anger and fear become prevalent. Those blocking the announcement have begun to see the announcement as the lesser of evils, and the holdouts are under aggressive insider attacks. Drudge is aware of this, the face of Obama being used to represent the pain among the elite. Brace yourself, the announcement is imminent, is his message.