M6.4 earthquake hit Kumamoto where locate in south island of Japan. Is this earthquake the start of what the Zetas' prediction "For the 7 of 10 events, Japan must experience a series of quakes, starting on the South Island and then proceeding to the North Island. " The epicenter of this earthquake is on the active fault line that go through the center of Japan. Could the Zetas tell us about this? [and from another]
What about this latest earthquake uptick. This week has been very active. It has been one quake after the other, especially in the last 2 days. It seems the brakes have come off.  Almost like we entered a new phase. Could the Zetas say something about this? [and from another] http://www.infowars.com/5-major-earthquakes-in-48-hours-as-a-seismo... Why is the crust of the Earth shaking so violently all of a sudden? Over the past 48 hours, there have been five major earthquakes globally, and one prominent seismologist has declared that “catastrophic mega earthquakes” could be on the way.  In fact, seismologist Roger Bilham of the University of Colorado has made headlines all over the world by warning that “current conditions might trigger at least four earthquakes greater than 8.0 in magnitude”.  [and from another] http://www.thebigwobble.org/2016/04/a-magnitude-70-1km-wsw-of-kumam... A magnitude 7.3 earthquake struck southern Japan early yesterday. Residents near a dam were told to leave because of fears it might crumble. The Japan Meteorological Agency initially said the Saturday quake was 7.1 magnitude but later revised it up to 7.3. The quake was 22 times more powerful, in terms of energy released, than Thursday's shock, according to the USGS website's "Magnitude Difference Calculator." The region's transport network suffered considerable damage with one tunnel caved in, a highway bridge damaged, roads blocked by landslips and train services halted. [and from another] http://www.thebigwobble.org/2016/04/a-mag-62-guatemala-is-fourth-ma... A mag 6.2 - 95km SSW of Champerico, Guatemala is the fourth major quake to hit our planet in two days, no tsunami warning has been issued. [and from another]http://www.thebigwobble.org/2016/04/three-major-quakes-this-afterno... An afternoon of madness as three major quakes are reported, the first was a magnitude 6.0 - 86km NW of Port-Olry, Vanuatu. [and from another] http://strangesounds.org/2016/04/10-strong-earthquakes-japan-april-...Series of 10 strong earthquakes strike Japan in 24 hours – killer M7.0 and M6.2 quake hit Japan. [and from another]http://www.theguardian.com/world/2016/apr/15/japan-earthquake-thous... Tens of thousands of people have been evacuated from earthquake-hit southern Japan as dozens of aftershocks struck and officials monitored nearby volcanoes for signs of activity. A total of 44,000 people were evacuated. The Japan Meteorological Agency (JMA) has warned there are likely to be strong aftershocks for the next week and advised people to stay away from any buildings that look unstable.  [and from another] http://www.theguardian.com/world/2016/apr/16/japan-hit-by-second-po... A second major earthquake in less than two days has shaken Japan’s southern island of Kyushu. The 7.3 magnitude earthquake struck at about 1.30am on Saturday. On Thursday a weaker magnitude 6.5 earthquake in the same region of Kumamoto brought down buildings. 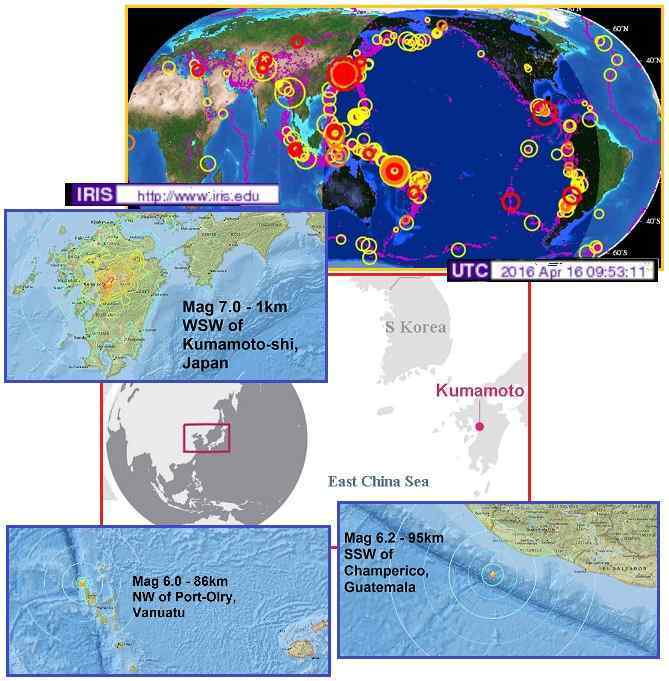 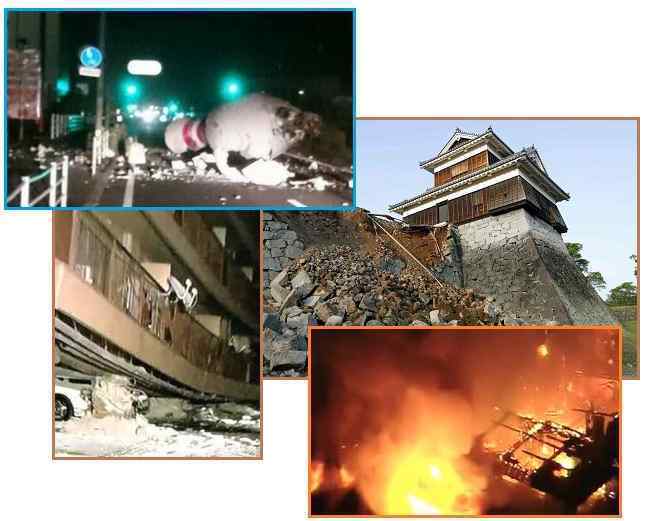 What is surprising and unusual in this latest spate of earthquakes around the Pacific Rim is not their magnitude, not their location, but their synergy. They all seem to be related, the domino effect we have long described and predicted in 1999. Nancy was able to document the domino effect in 2002. The increased magnitude of quakes has forced this into the news. In keeping with giving the faint hearted among the populace an excuse for the Earth changes, other than the approach of Nibiru, seismologists are excusing the uptick in quakes by claiming that these domino quakes are NORMAL, the result of plates being destabilized so they must adjust.

Desperate attempts by the establishment to explain the Earth changes, such as an Earth wobble caused by melting ice in the Arctic, will fail to convince those among the populace who have eyes to see, as the Nibiru complex has also become increasingly visible in the skies. Of course aftershock emerge after a major quake, but aftershocks do not result in quakes along plates half way around the world! This is the 7 of 10, after being softened and delayed by the Council of Worlds, re-emerging. The Sunda Plate completes its sinking, the Philippine Plate completes its tilting, and the S American Roll picks up the pace.