150+ world leaders are attending the UN Climate talks that has begun in Paris on 30th of November and it will last for two weeks. The real question is: While they are all together in one place, have Obama, Putin and Xi put aside their worries and differences and finally press ahead with the announcement? For the announcement to have any impacts, it has to happen now and the world cannot wait for another year and zetas agreed on that. [and from another] http://www.theguardian.com/environment/cop-21-un-climate-change-con...  Latest news and comment on the COP21 UN climate change conference in Paris, France.  [and from another] Congressman Lamar Smith of Texas, often described as “climate change denier” is challenging the accuracy of some specific climate data released by federal agencies. ZetaTalk has for a long time asserted that many government leaders (both U.S. and foreign) follow ZetaTalk, and are well aware of the approach of Planet X and the effects it has been having on the earth. Are these “climate change deniers” aware of ZetaTalk predictions? (Or some of them anyway?) Also, of course, many of them have their own personal or economic reasons for their positions (Texas is an oil producing state), as the Zetas have long reported. Also, can you say how informed about ZetaTalk are many “main stream” reporters, such as Lisa Rein of the Washington Post, who wrote the story referred to above?  If so, they must have feelings about being “muzzled” by their editors and publishers. Comments by Zetas? [and from another] http://www.theguardian.com/cities/2015/dec/01/dhaka-city-climate-re...  Every day, some 2,000 people settle in the Bangladeshi capital. It’s nothing new – for generations the city has been a magnet for men and women escaping rural poverty. But now there’s another driver that experts say has accelerated the race to the capital: the Earth’s changing climate, which has already made life extremely difficult in stretches of this pancake-flat country threaded with rivers. In the coming decades, millions more “climate refugees” around the world are expected to make similar journeys. [and from another] http://www.politico.eu/article/paris-climate-deal-is-meaningless-co...  Conventional wisdom holds that negotiators are hashing out a fair allocation of the deep emissions cuts all countries would need to make to limit warming. That image bears little resemblance to reality. The developing world, projected to account for four-fifths of all carbon-dioxide emissions this century, will earn applause for what amounts to a promise to stay on their pre-existing trajectory of emissions-intensive growth. A group of developing countries led by China and India has rejected “any obligatory review mechanism for increasing individual efforts of developing countries.” The final submissions are not enforceable, and carry no consequences beyond “shame” for noncompliance — a fact bizarrely taken for granted by all involved. Climate finance is the term for wealth transferred from developed to developing nations based on a vague and shifting set of rationales including repayment of the “ecological debt” created by past emissions, “reparations” for natural disasters, and funding of renewable energy initiatives. Developing countries are expecting more than $100 billion in annual funds from this agreement or they will walk away. [and from another] http://www.reuters.com/article/2015/11/30/us-climatechange-summit-p...  The U.N. climate conference in Paris is most likely humanity's last chance to thwart global environmental disaster, Pope Francis said, warning the world was "at the limits of suicide". The pope was asked if the U.N. climate summit in Paris would mark a turnaround in the fight against global warming. "I am not sure, but I can say to you 'now or never'," he said. "Every year the problems are getting worse. We are at the limits. If I may use a strong word I would say that we are at the limits of suicide." He spoke of retreating glaciers in Greenland and low-lying countries at risk from rising sea levels. "I am sure that the (Paris delegates) have goodwill to do something. I hope it turns out this way and I am praying that it will," he said. 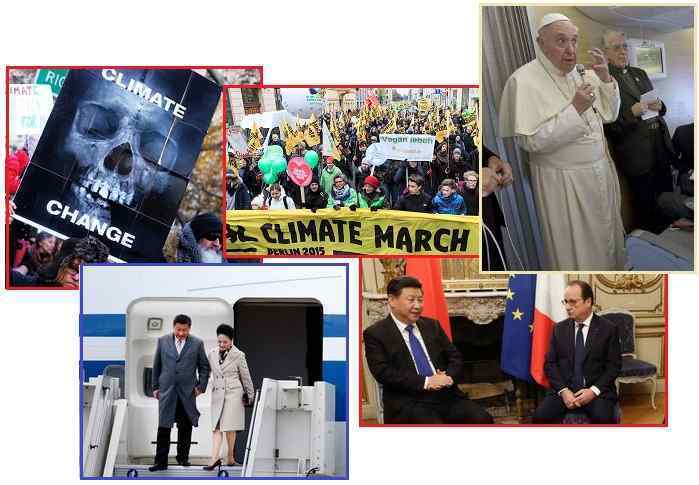 The Pope’s comments on the Climate Conference give a clue to the real agenda in Paris, as more than 150 Heads of State meet to discuss the future. The Pope did not say “man-made” Global Warming. He stressed that the problem is getting worse, that glaciers are melting in Greenland, and the seas are rising. He did NOT cite the cause, which of course is the pending passage of Nibiru, the increasingly violent daily Earth wobble, the 7 of 10 plate movements, and the increase in CO2 from exploding volcanoes.

These Heads of State know that Nibiru is causing these problems. They also know there is a pending contested announcement admitting this to the public. In their minds, the issues to be resolved are what to say to their public in the event the announcement proceeds, and what to say to their public if the announcement continues to be repressed. Thus, proclamations straddle the fence, and allow for movement in any direction. These Heads of State are also acutely aware of the ZetaTalk prediction accuracy, and the grim prognosis for many countries of the world.

India, in particular, is trying to broker immigration for its educated citizens in exchange for cooperation in the big lie that rising seas are due somehow to man-made emissions. China, with over a billion citizens to relocate, is guarding its border with India and Asia, using its funds to bribe other countries, in Africa and S America, to open their borders instead. Obama, as we have mentioned, has the ability to broker immigration via the TPP agreement, which cannot be challenged by Congress.  Of course, an update on the status of the announcement is being sought by all, but these proceedings are highly secret. As we so often stated, curiosity is not the most important thing. Getting the announcement to happen is the priority.