Chualar CC and the 2003 Wisconsin CC in the Media! (NEW ZetaTalk) Providing this early due to the number of questions I and the Zetas receive on this issue.

I am adding a Q that I have gotten repeatedly, via email. Needs to be addressed as it is in the media too, web sites such as CNN, Yahoo, HuffPost, local news, and of course Crop Circle Connector. There were no field reports, thus no reports of grain nodes bent and still growing. The design was promptly plowed under by the owner.  Then Earth Files gives us the Morse Code and Braille readings. Have we ever had such coverage for a legitimate circle design? First time ever they give such coverage and it is for an obvious fraud. Good Glory!
http://www.cnn.com/2014/01/01/us/california-crop-circle-gone/index....
http://news.yahoo.com/blogs/trending-now/mystery-of-california-crop...
http://www.huffingtonpost.com/2014/01/01/salinas-crop-circle_n_4527...
http://www.mercurynews.com/bay-area-news/ci_24816446/salinas-crop-c...
http://www.earthfiles.com/news.php?ID=2158&category=Environment
[and from another]
http://www.cropcircleconnector.com/2013/chualar/chualar2013a.html
Jim Gillott, of Chualar, said he saw extension ladders and a crew of 30 people in the field last week. "Every time I drove by I saw them walking around," Chualar resident Jake Gavin said. "It looked like they had little GPS's or something."
[and from another]
http://www.huffingtonpost.com/2014/01/01/salinas-crop-circle_n_4527...
Others, like Jeffrey Wilson of the Independent Crop Circle Researchers Association, insist the Salinas crop circle is a hoax. Wilson said the circle is similar to the work of Circlemakers.org, a professional crop circle-making group that has done work for the BBC, Nike, History Channel and others.
[and from another]
http://www.huffingtonpost.com/2014/01/01/salinas-crop-circle_n_4527...
[1] This is a photograph of a complex geometric crop circle forming in the early morning hours, which was eye-witnessed by Art Rantalla on July 4, 2003. He reported seeing this crop circle swirl and form during the passage of a severe weather front passed through Dodge County, Wisc. The formation was evaluated by members of the ICCRA and found to have elongated growth nodes, expulsion cavities in the growth nodes, and other non-hoaxable effects. The next image shows another crop formation. [2] This is a photo of another complex geometric crop circle that was discovered Aug. 8, 2003, in the same county as the previous image, also investigated by members of the ICCRA. It tested positive for growth node elongation and had expulsion cavities in the growth nodes (both unhoaxable effects). [3] This is a close-up of an explusion cavity (a hole blown from the inside-out) resulting from the Dodge County, Wisc., crop formations of July 4 and Aug. 8, 2003.  [4] This is a close-up of anomalous twisted seed heads resulting from the Dodge County, Wisc., crop formations of July 4 and Aug. 8, 2003. (All courtesy of Jeffrey Wilson.) 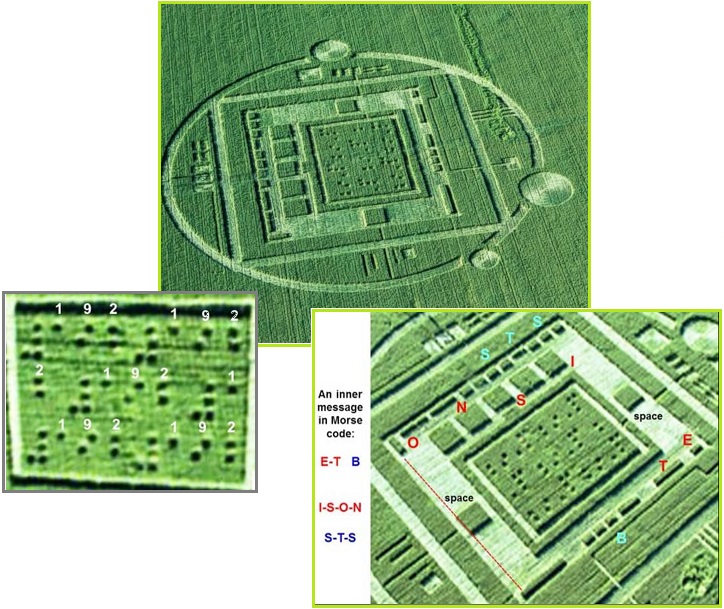 SOZT
As circle expert Jeffrey Wilson has noted, the Chualar design is a fraud, done by man. The real area of interest here is why major media sites chose to feature this fraud so heavily. CNN, Yahoo, and HuffPost all featured it on their websites as a front page item. A decade ago all crop circles were either ignored or announced by the media as hoaxes. Men claiming they created the designs with boards
http://www.zetatalk.com/awaken/a101.htm
would be interviewed by the media, who would ignore evidence
http://www.zetatalk.com/ning/09ju2012.htm
such as grain bent at the nodes, growing faster after the designs were laid than unaffected grain, and radiation readings from the site. Why the change now, and why was the significant design laid in Wisconsin in 2003 near Nancy’s home featured so obviously on HuffPost?

This is clearly related to the pending announcement admitting the near presence of Planet X, aka Nibiru. As we have mentioned repeatedly, there are TWO cover-ups expected to drop during the announcement – the cover-up over the pending passage of Nibiru, and the cover-up over the reality of the alien presence. The US has been pressed for years to disclose what they know about aliens, as they were the site of Roswell and are known to have alien bodies and crashed ships. The same group of former CIA/DIA members and wealthy individuals who were inducted into MJ12 at the time of Roswell are resisting this, just as they are resisting admissions about Nibiru.

In that NASA found it necessary to mention Nancy’s name
http://www.zetatalk.com/newsletr/issue271.htm
in the past, warning the public not to listen to her, and did so repeatedly in 2009 and through to their Fall 2012 Hangout
http://www.youtube.com/watch?v=KHXW9bZtgpc
on the Mayan Calendar issues, she is expected to get media attention after the announcement proving that she had been correct all along. But it is more than this that will rocket Nancy into the spotlight. ZetaTalk correctly predicted the path Nibiru would take into the solar system in the years prior to 2003, and much of this will be included in the announcement. Where did this astonishing information come from, if not from we, the Zetas, as Nancy claims?

Major media editors have been told in the past to exclude any information that indicates the Sun or Moon out of place, a Second Sun rising or setting. They have also been told to exclude details about crop circle formation,
http://www.zetatalk.com/index/blog1228.htm
to give the impression that they have been man-made.  Now these editors are being coached on what to expect, told the National Security Directive by Reagan making these subjects forbidden had been lifted, and even requested to ease the shock the public is expected to experience when two, not one cover-ups come crashing down.  Thus Jeffrey Wilson, a long standing and well respected expert on circle origins, is quoted in the HuffPost article not only declaring the Chualar formation a fraud, but declaring in the slides that the 2003 Wisconsin formation was legitimate.

Who laid the Chualar formation, and what was their intent? There are several clues that this was intended to be a pre-announcement nudge to get the issue of the alien presence into the media. The land was privately owned, and the crop intended to be plowed under as mulch eventually. How convenient. The land sloped such that it could not be seen except on over-flight. How handy. Workmen with GPS units and ladders were even seen in the area days before the design was discovered. Legitimate circle makers do not use Earth languages or work in rectangles,
http://www.zetatalk.com/index/zeta304.htm
yet the Chualar design includes Morse Code and Braille. The message “ET B 192 ISON STS” is clear – the hype about ISON was a Service-to-Self scheme to detract from the real presence near the Sun, Nibiru.
EOZT

Now that it was man-made is admitted.

An elaborate crop circle that appeared last week in a grain field in California was a stunt by chip-maker Nvidia. The chip, which packs 192 cores -- individual processing engines that handle complex mathematical calculations needed for 3-D modeling, simulations and computer gaming. Crop circles have been appearing in fields for decades. Their origin is usually a mystery and while many assume them to be man-made, some believe they might represent calling cards by by extra-terrestrial visitors.