Looks like we're going to have to start being careful and healthy! [and from another] Dangers of a Deadly Fungus: The Candida auris ‘Superbug’ June 11, 2017 https://draxe.com/candida-auris/ While infections have been diagnosed in patients of all ages, from preterm infants to seniors, healthy people don’t get C. auris infections. [and from another] A Mysterious Infection, Spanning the Globe in a Climate of Secrecy April 6, 2019 https://www.nytimes.com/2019/04/06/health/drug-resistant-candida-au... Over the last five years, it has hit a neonatal unit in Venezuela, swept through a hospital in Spain, forced a prestigious British medical center to shut down its intensive care unit, and taken root in India, Pakistan and South Africa. Recently C. auris reached New York, New Jersey and Illinois.  Antibiotics are also used widely to prevent disease in farm animals, and antifungals are also applied to prevent agricultural plants from rotting. Some scientists cite evidence that rampant use of fungicides on crops is contributing to the surge in drug-resistant fungi infecting humans. [and from another] Deadly germs, Lost cures: A Mysterious Infection, Spanning the Globe in a Climate of Secrecy April 6, 2017 https://www.msn.com/en-us/news/world/deadly-germs-lost-cures-a-myst...  A 2013 paper in Plos Pathogens said that it appeared to be no coincidence that drug-resistant Aspergillus was showing up in the environment where the azole fungicides were used.  The same thing is happening with C. auris, which is also found in the soil. Azoles are used widely on crops - potatoes, beans, wheat, anything you can think of, tomatoes, onions. We are driving this with the use of antifungicides on crops. [and from another] https://www.cdc.gov/fungal/candida-auris/candida-auris-qanda.htmlThe earliest known strain of C. auris dates to 1996 in South Korea. C. auris infections have been reported from over 20 countries. 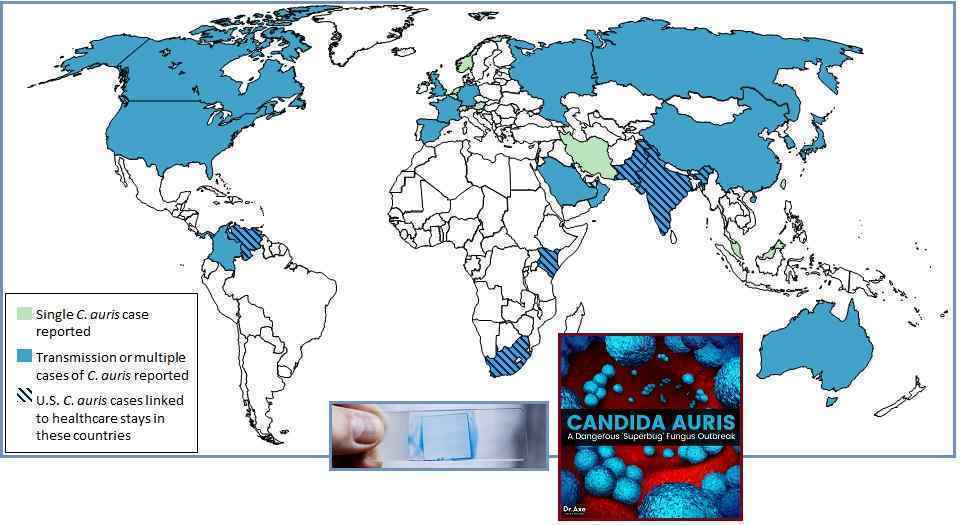 At the start of the ZetaTalk saga we predicted that mankind and the creatures on Earth would increasingly take sick, from opportunistic germs spreading around the world due to climate change, debilitating emanations from the roiling core of the Earth, magnetic blasts, debilitation from starvation, and general depression.  C. auris is more than an opportunistic germ as it has arisen, almost simultaneously, around the globe. Opportunistic germs creep along a coastline or across a land as the climate changes. If caused by the over use of fungicides, why has it emerged in countries where these fungicides are not used?

What has life on Earth increasingly dealt with, over the past decade when C. auris emerged? Greasy elements in the tail of Nibiru are causing explosions on the edge of the Earth’s atmosphere – the Lomonosov explosions. These greasy elements of course drift down to the lower atmosphere, causing neon clouds and Moon and Sun halos. But they also make the air less clean, and land on ponds and oceans alike. Then there is the magnetic sickness, which can create afflictions as extreme as the sleeping sickness affecting the residents of Sleepy Hollow. The creatures of Earth expect a Schumann Resonance of 7.83 Hz, not multiples of that on a regular basis.

But as statistics have shown, it is not the onslaught of debilitating elements that have caused the C. auris population explosion, as only those who are already struggling are affected. Healthy people don’t get C. auris infections. There is always a battle for supremacy among germs, as among all species. They look for a niche. This one lives in the gut and is considered a friendly germ, a pro-biotic. This one eats oil and can clean an oil tanker. C. auris has flourished because its competitors are dying off. Simple as that.