My mother (she is a long time contactee) and I were discussing what specific preparation we STO persons are encouraged to organize after the shift (we are already preparing for it and communicating to hundreds and more about the shift) as a community to facilitate smooth preparation of the Service to Other helpers. This would be before the full transition to 4th density. Our question is: Will we be guided via telepathy to organize healing sectors, education sectors, technology sectors (with help), farming food sectors etc. All within one STO community or linked to separate communities of one needed activity? It would seem the hybrids will come to areas that are ready and willing to work and have shown their aptitude to do so.

There is much confusion about how communities are organized in Service-to-Other groups compared with how communities are organized in mankind's current 3rd density existence. There is almost not crossover. For instance, in communities that are fully Service-to-Other, everyone volunteers. Work is done based on the needs that are ascertained or felt, not based on making a profit or whether someone is licensed to do this or that or whether the work that needs to be done is dirty and disgusting. In fact, contrary to how human society currently works, the more dirty and disgusting a job is, the more volunteers are likely to arrive! Where your desire to facilitate Service-to-Other communities is admirable, you are making a major mistake in assuming that everyone involved will be Service-to-Other. They won't be, and more than likely will be predominantly undecided with a strong streak of Service-to-Self due to your making it easy for those who are Service-to-Self to take advantage of others. Those "sectors" that you talk about where the work is easy and one can coast would be heavily populated by the lazy. No need to organize, frankly, as survivors will barter with each other, and each will rely upon their profession or trade skills in so doing. It will all sort out. The hybrids, and others operating in the Service-to-Other, would not come to a community simply because it was, in human terms, "organized". They come because the predominant spiritual orientation is Service-to-Other, the leadership Service-to-Other, and there would be no chance of any assistance given being taken over by those who are Service-to-Self. 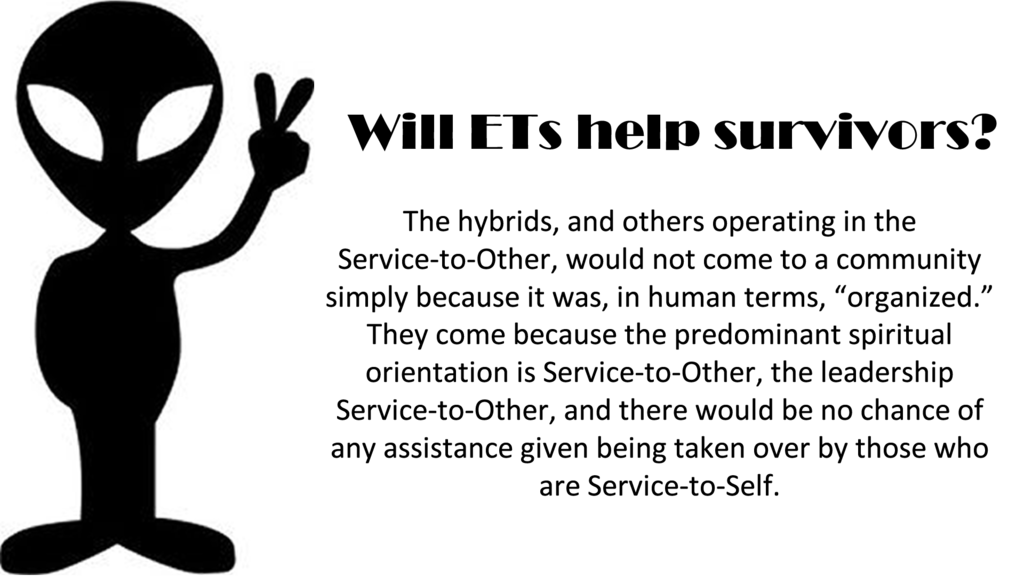