Would you or the Zetas say whether these white rings spotted on March 10 above the mountain Eiger in the Alps in Switzerland are caused by UFOs, fancy flying military aircraft or a natural weather effect? The rings don't have the same look as most hole punch clouds. The various articles below and their comments don't all agree on the explanation. [and from another] That’s not Natural! Mysterious Cloud Circles Appear over Swiss Alps March 13, 2021 https://strangesounds.org/2021/03/mysterious-cloud-circles-appear-o... The eerie sky formation hovered over the Eiger, a 3,967-metre (13,015 ft) mountain of the Bernese Alps. [and from another] Why does the Trail from the Plane sometimes Last for Hours and what does the "Chemistry" have to Do with It? March 15, 2021 https://vokrugsveta.ua/science/pochemu-sled-ot-samoleta-inogda-derz... Experts from the MeteoNews center report that these forms are clearly of artificial origin and, most likely, are condensation traces from the passage of military aircraft. The condensation trail consists of condensed water particles or tiny ice crystals. It's simply steam. Moisture condenses behind aircraft engines as a result of several major factors. First, there is a certain amount of water vapor in the exhaust gases and this is added to the moisture in the air. And soot particles serve as condensation centers. [and from another] http://poleshift.ning.com/profiles/blogs/hole-clouds 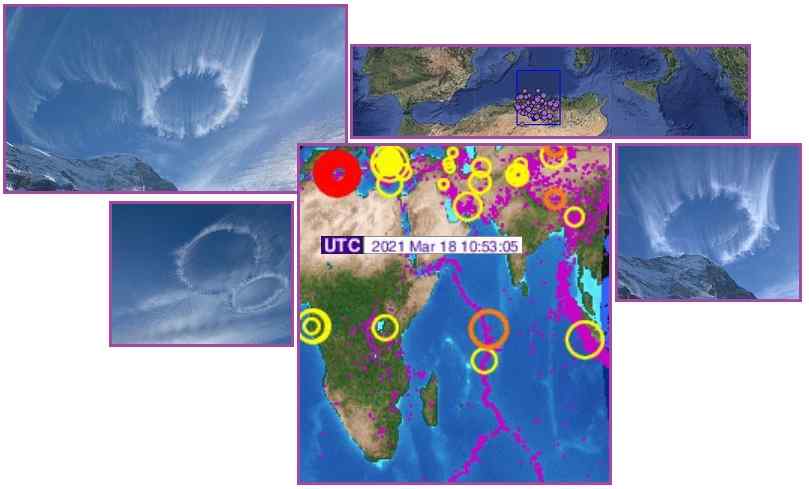 The Eurasian Plate is clearly being stretched above the Mediterranean, with the top part of the African Plate being pushed against Greece and now the border to the East of Gibraltar being pushed to rip. The African Plate must drop for it to have room to roll, and this drop will commence shortly. Meanwhile, pressure points cause what are called earthquake clouds, striated lines in the sky that reflect puffing emissions from the rock below. The prevailing westerly winds and the Jet Stream push these emissions and the striated clouds up over the Alps.

Cloud Holes are being formed lately because the atmosphere is in turmoil due to the Daily Earth Wobble. We have called them incomplete tornados. One can see from the photos of the recent Swiss Cloud Holes that they are repeatedly punched, in step with the striation in the clouds. The populace along the Mediterranean should expect many unusual phenomena as the African Roll progresses. Recently we have had earthquake assaults in Greece and now Algeria, and a sudden sinkhole plague in Croatia.