I don't know if the Zeta's would answer this as obviously the stock market will crash to zero or be shut down at some point along with all currencies becoming worthless and the barter system becoming the dominant system of exchange as the earth changes progress. That said, the Dow had it's biggest one day drop in history today of over 1175, (down 1600 at one point), continuing it's big drop of 666 on Friday which was the day the FISA memo was released. Is this related to the recent train wreck attacks by the deep state et al on GOP members of congress five days ago and the Amtrak train wreck yesterday as it lashes out in retaliation against the Dunsford/Trump junta et al? It seems the timing is very coincidental but then again this could just be a regular market correction. [and from another] https://www.cnbc.com/2018/02/04/us-stocks-interest-rates-futures.html The Dow fell 665.75 points on Friday — or 2.5 percent — notching its biggest one-day sell-off since June 2016.  [and from another] https://www.mansionglobal.com/articles/87753-rothschild-family-sell... The Rothschilds have sold an Austrian hunting estate almost the size of Manhattan that the storied European banking family has owned for 143 years. Rothschild heirs Nancy Clarice Tilghman and Geoffrey R. Hoguet, who live in the United States, sold Langau—which includes two power plants and a grand Tyrolean-style lodge—to the owners of a paper manufacturing firm, Prinzhorn Holding, in what is being heralded as a historic European land sale.  [and from another] https://seekingalpha.com/article/4113006-apache-corp-stock-tumbling Apache Corp. (APA) reported strong levels of cash flows last year, but the company has recently confirmed that it will face a large cash flow deficit of more than $1 billion in 2017. The update has fueled a sell-off in Apache stock. 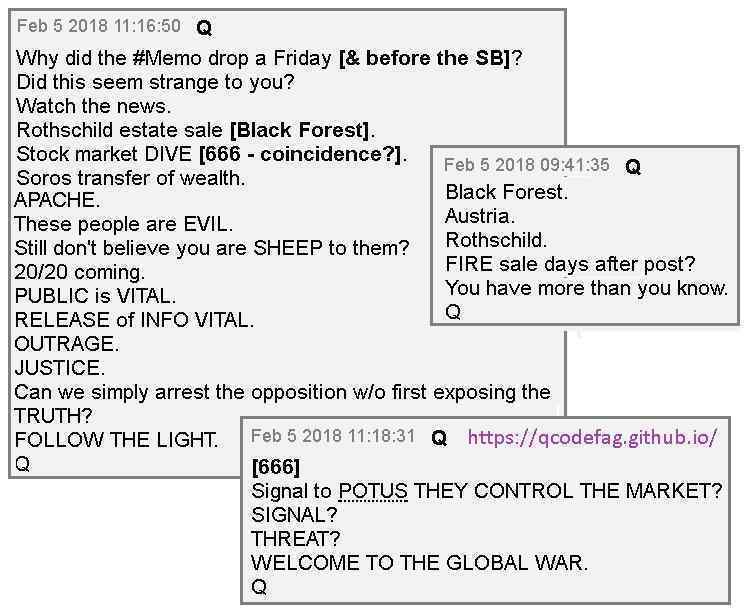 The DOW drop of -666 points on the day the FISA memo was released was not an accident nor a coincidence. It was deliberate, as hinted by the enigmatic Q who openly pointed to the recent sale of a Black Forest estate and the dropping stock value of the Apache corporation. If the Greenbrier Amtrak train crash was manipulated, intending to kill a number of Republicans in Congress on the day after the well-received State of the Union address, the S Carolina derailment of another Amtrak train a day later was also manipulated, intending  to send a message to Trey Gowdy.

The battle between the White Hats and the Black Hats is convulsing in the last stages, so it has become public at long last. We have regularly been reporting on the steps and stages, from the failure of Obama to announce the presence of Nibiru by October 20, 2015 (due to the wealthy elite resisting and insisting the cover-up continue) with Trump and the Transition Team of White Hats now shoveling out the Deep State swamp. The Black Hats - composed of the Bush/Clinton/Soros criminal cabal and the IMF and Jewish bankers imposing debt slavery on the world – are fighting for their lives.

In the past, intimidation and bribery were considered sufficient. Blackmail in the form of pedophilia evidence, almost always a deliberate entrapment, was used extensively. If all of this did not suffice, then individuals would be assassinated. This would be reported as a suicide unless a message was to be sent, as was the case with Seth Rich. Money laundering, as with the Clinton Foundation cash slush, flourished. Using dirty nukes to murder millions as a threat has also been part of the arsenal, ergo the recent missile threat against Hawaii. None of these maneuvers have worked to stop the White Hats, so now a new maneuver is being tried.

The Black Hats are in essence going public with their threats. If the Republicans controlling Congress insist on pursuing Deep State draining, exposing those in the FBI and DOJ and State Department who have committed treason, then the Black Hats will murder their families, including the children that were on the Greenbrier train. If Gowdy continues his pursuit, then his home state of S Carolina will be maimed. And if Trump insists on freeing the American people from the debt slavery the Black Hats had imposed, then the cabal will use their wealth hoards to embarrass him. The DOW crash was deliberate, and -666 was not an accident.