Archaeologists have discovered sophisticated prehistoric stone walls deep beneath the surface of Lake Huron that give the clearest portrait yet of the mysterious people who lived in the Great Lakes region at the end of the Ice Age.

"It's just way more complex than anything we've seen before," said John O'Shea, a University of Michigan archeologist who published his findings Monday in the Proceedings of the National Academy of Science.

Since 2008, O'Shea and his colleagues have been investigating an underwater ridge in Lake Huron that runs roughly between Alpena, Mich., and Point Clark, Ont. As the glaciers were beating their final retreat about 9,000 years ago, water in the lake was about 100 metres below today's level and the Alpena-Amberley Ridge was exposed.

In 37 metres of water, just over 50 kilometres from shore, O'Shea was looking at two stone lines forming a lane about 30 metres long and eight metres wide which ended in a corral-type structure. It had hunting blinds built into the sides as well as other lanes and structures.

This definitely is yet another 'primer' for the people to expect an announcement....more proof of massive and sudden changes to peoples far more advanced then we thought at the time!!!

Descriptive of features of Planet X

Astronomers Have Discovered A Star That's As Cold As Ice

"Because they are so much smaller and cooler than stars, brown dwarfs appear red and faint. But astronomer Kevin Luhman noticed that WISE J085510.83-071442.5 was very red and very faint...partly because it is small...


"It may well be that instead of being a brown dwarf, this object may in reality be one of the half dozen or so mysterious rogue planets..., "

Comment by sourabh kale on April 26, 2014 at 11:52am
University of Washington launches effort to prepare Northwest region for 9.0 magnitude quake - 314 years since the last one
April 25, 2014
SEATTLE -- Scientists fully expect that the coast of Washington, Oregon, British Columbia and part of northern California to see a magnitude nine subduction zone earthquake again.It's been 314 years since the last one in January of the year 1700. Scientists know of this quake because of written reports from Japan that recorded a tsunami. The reports of a giant wave also correlate with rings in old trees killed when marsh land along the Washington coast dropped several feet, allowing sea water to envelope their roots.This week, scientists with the University of Washington gathered 55 experts from around the region. Their goal: to step up efforts to prepare for the next magnitude nine earthquake in the Northwest and the ensuing recovery."That's the critical part. To be prepared and then to bounce back." said John Vidale,Washington state's seismologist and head of the Pacific Northwest Seismic Network. Vidale moderated the event.MORE:Quake off Vancouver Island a wake-up call for the NorthwestThe project is called M9, as in magnitude 9.But the lessons learned from it could be applied to any major natural disaster in Washington, a state that's currently recovering from the landslide near Oso on March 22 that killed at least 41 people.In addition to earthquake scientists, M9 participants included structural engineers, transportation experts, representatives from the insurance industry, social scientists, oceanographers, tsunami specialists and emergency managers.The plan is to update the science to better prepare everything from skyscrapers to bridges to people in their own homes for when a mega-quake hits."People may not be preparing themselves adequately for the kind of disaster that's going to happen," said Ann Bostrom with the U.W. Evans School of Public Affairs. Butshe added that the big quake is just one scenario that threatens people and homeowners."I do think about insurance, about the preparations people can do. I think about the mental preparations people have to doin order to plan for all kinds of hazards, and what we can do in our risk communications projects to help people do that," Bostrom said.Interdisciplinary efforts have happened before, at meetings and conferences. But this time it's a bigger commitment to work together: a three year, $4 million project financed by a grant from the National Science Foundation.The risk from violent shaking and a tsunami is not just confined to coastal communities. The Seattle area is also considered at an elevated risk. The city andsome of the surrounding area sits on a basin of softer soil and rock surrounded byharder materials. That could trap earthquake waves and cause them to resonate for a longer period of time, creating more damage.An area of further study is how those earthquake waves, particularly ones of certain frequencies will effect tall downtown buildings.
http://www.krem.com/news/northwest-news/256793561.html

Apocalypse HOW?  Could  you survive after the end of civilisation?

No mention of Niburu of course, but could be part of the pre - announcement.

And some useful tips for survival.

Barack Obama's Twitter account sent this link today, a show on Showtime showcasing climate change, and not blaming humans (apparently). Produced by James Cameron, who according to the Zetas has personally seen proof of their words, when he dove into the Marianas Trench.

Here's a surprise for you….."microlensing used to look at massive p...

It never ceases to surprise me that the Daily Mail keeps the dripping tap technique to embed the concepts in the mind of the readers. Readers of the blog should note that the usual Daily Mail coverage is usually concerned with celebs ( A list to Z list with anything in between), fashion, opinion, right wing perspectives on immigration, education, policy and politics…. and surprising for such a paper, the latest in space exploration from NASA!!!

7 Sunken Cities Around The World

The historical precedent is clear, for those who have eyes to see and ears to hear! http://wallstcheatsheet.com/life/7-sunken-cities-around-the-world.h...

Interesting body language of Bill Clinton when asked point blank if he would tell us if he knew there were aliens! He says he would tell, but is looking down, so you can't see his eyes when he says it.

Bill Clinton talks about not being surprised if Aliens visited 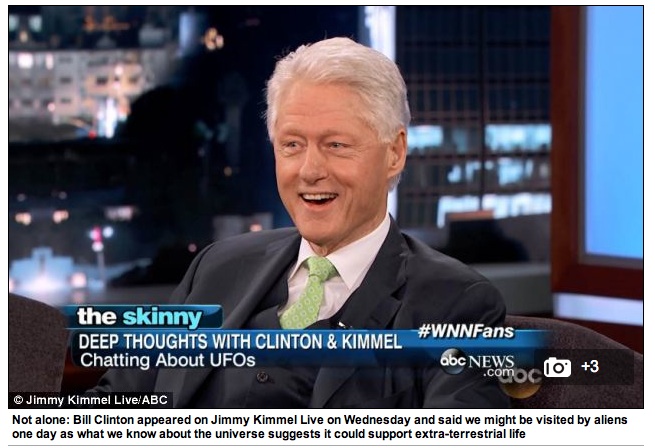 perhaps another example of pre-announcement nudge via MSM?

The other matter that was mentioned was an Independence Day like event - perhaps a hint at a false flag op?