Nasa chief scientist: 'We’re close to finding and announcing alien life on Mars....but is the world ready?'
The world is not prepared for the discovery of life on another planet even though it may only be a couple of years away, Nasa’s Chief Scientist has warned.

Next summer, two rovers from Nasa and the European Space Agency (ESA), will travel to Mars to drill horizontally into rocks and deep into the surface, in the hope of finding evidence of living organisms.

The missions are the best chance humanity has ever had of answering the question: ‘Are we alone in the universe?’
https://www.telegraph.co.uk/science/2019/09/28/nasa-chief-scientist... 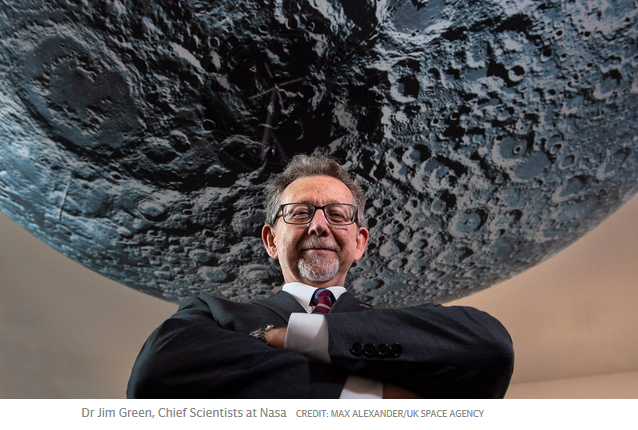 Exceedingly Rare:  Three Supermassive Black Holes Are About to Collide.

A team of NASA scientists have caught three supermassive black holes in the act of merging together, a billion light-years away from Earth.

“Dual and triple black holes are exceedingly rare,” said researcher Shobita Satyapal, from George Mason University, in a statement. “But such systems are actually a natural consequence of galaxy mergers, which we think is how galaxies grow and evolve.”

It’s an exceedingly rare sight that is unusually hard to spot thanks to giant shrouds of gas and dust surrounding the black holes. But by combining data from the two space telescopes and the Arizona-based telescope back on Earth, the scientists were able to make the discovery.

The team published its findings in the latest issue of The Astrophysical Journal. They used optical light data from the three telescopes.

“Optical spectra contain a wealth of information about a galaxy,” said co-author Christina Manzano-King from the University of California in the statement. “They are commonly used to identify actively accreting supermassive black holes and can reflect the impact they have on the galaxies they inhabit.” 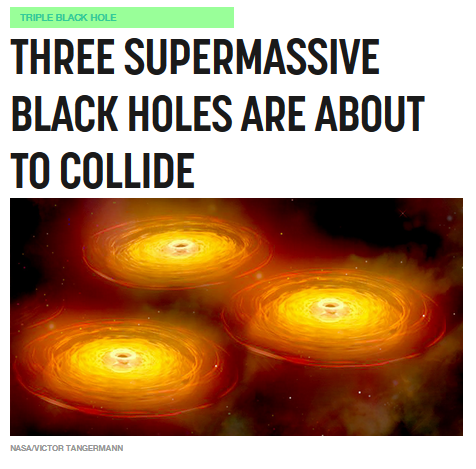 With all these NEW advances and discoveries, the probabilities are high that some day soon, NASA will finally find the elusive #Nibiru, aka #Planet_X.

The star that spawned major hype about possible ‘alien megastructures’ in recent years may, in fact, have company. A new study has found 21 stars with similar dipping properties which may unravel the mystery of ‘Tabby’s star.’

The lack of satisfactory explanations as to why the star was dimming pushed astrophysicist and researcher Edward Schmidt to look for more examples of similar ‘dipping’ stars whose behavior could also be analyzed to more quickly and accurately determine the cause.

The fluctuations were erratic and yet too substantial to be explained away by planets or dust crossing in front of the star, fueling speculation that the phenomenon may have been caused by the remnants of a so-called Dyson Sphere, a megastructure built to harness the power of a star for use by a highly advanced civilization.

Schmidt was careful to note that the Northern Sky Variable Survey did not contain Boyajian’s star, so he may only have scratched the surface of potential ‘dippers’ that could help unlock the mystery of this cosmic phenomenon.

“We’re obviously missing some of these stars because of the catalogs we have,” Schmidt said. “By looking at more catalogs, we may get a better picture of what’s going on, even though it won’t be a complete picture.” A space object that was discovered by Russian scientist Gennady Borisov in August 2019 and preliminarily designated as a comet by scientists might in reality turn out to be an alien spacecraft, one Californian researcher suggests.

A mysterious object heading through our Solar System could be an interstellar probe piloted by hyper-intelligent beings, a senior astronomer at the Search for Extra Terrestrial Intelligence (SETI) Institute in California, Dr Seth Shostak, told the Sun. 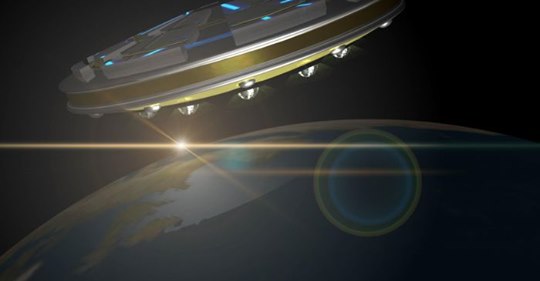 These structures came directly from the Lunar Orbiter then to NASA and then some how made its way to the International Astronomical Union (IAU) Working Group for Planetary System Normenclature (WGPSN). 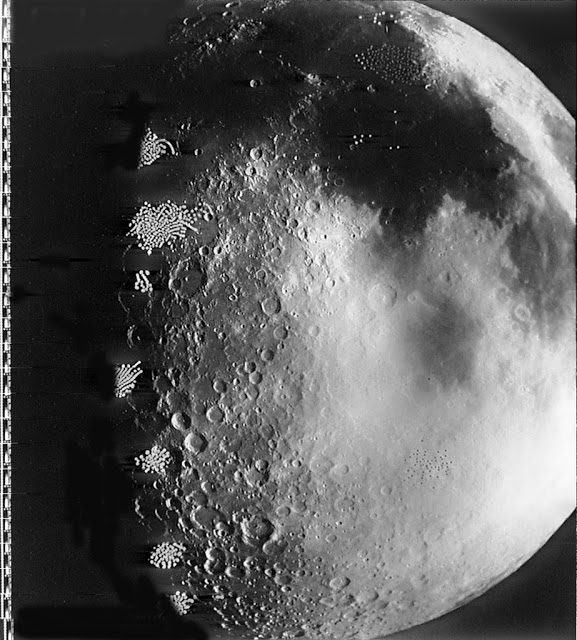 The reference to the fictional sea remained on NATO’s website for more than 12 hours, before the alliance quietly changed it to “Sea of Azov,” a real-life body of water encircled by Russia and eastern Ukraine.

NATO’s military superiority to Russia is “eroding,” according to Chairman of the US Joint Chiefs of Staff Gen. Joseph Dunford. China’s capabilities are creeping up quickly as well, he told reporters on Tuesday following a meeting of the alliance’s military committee. But who needs military superiority when you have access to science fiction worlds? For the first time, the U.S. Navy has acknowledged that the three UFO videos that were released by former Blink-182 singer Tom DeLonge and published by The New York Times are of real "unidentified" objects.

Gradisher added that “the ‘Unidentified Aerial Phenomena’ terminology is used because it provides the basic descriptor for the sightings/observations of unauthorized/unidentified aircraft/objects that have been observed entering/operating in the airspace of various military-controlled training ranges.”

The statement has been corroborated with other media outlets. Fox News has reached out to the Navy for additional comment for this story.

The videos in question, known as "FLIR1,” “Gimbal” and “GoFast,” were originally released to the New York Times and to The Stars Academy of Arts & Science (TTSA). In December 2017, Fox News reported that the Pentagon had secretly set up a program to investigate UFOs at the request of former Sen. Harry Reid, D-Nev.

In June 2019, Reid, now retired, expressed his desire for lawmakers to hold public hearings into what the military knows. "They would be surprised how the American public would accept it," he said during a wide-ranging interview with a Nevada radio station. "People from their individual states would accept it."

John Greenewald, Jr., who publishes The Black Vault, told Motherboard he was surprised at the language the Navy used in its official statement.

“I very much expected that when the U.S. military addressed the videos, they would coincide with language we see on official documents that have now been released, and they would label them as ‘drones’ or ‘balloons,’” Greenwald told the news outlet. “However, they did not. They went on the record stating the ‘phenomena’ depicted in those videos, is ‘unidentified.’ That really made me surprised, intrigued, excited and motivated to push harder for the truth.” 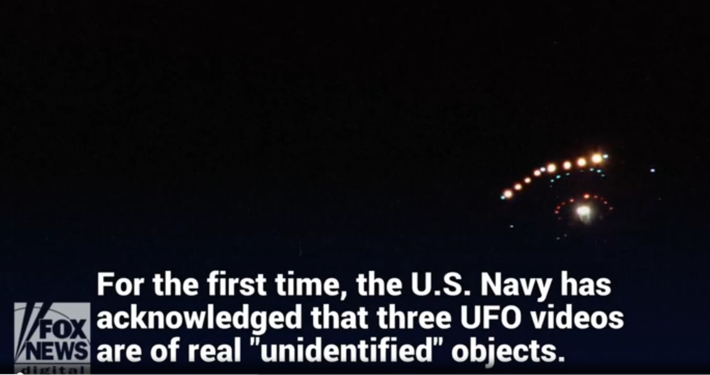 Wed September 11, 2019
(CNN)For the first time, astronomers have peered into the atmosphere of an exoplanet -- a planet outside our solar system -- and discovered both water vapor and temperatures that could potentially support life, according to a new study.
The exoplanet, known as K2-18b, is eight times the mass of Earth and known as a super-Earth, or exoplanets between the mass of Earth and Neptune. It orbits a red dwarf star 110 light-years away from Earth in the Leo constellation. The planet was first discovered in 2015 by NASA's Kepler spacecraft.
The researchers published their findings in the journal Nature Astronomy on Wednesday.
"Finding water in a potentially habitable world other than Earth is incredibly exciting," said Angelos Tsiaras, study author and research associate at the University College London's Centre for Space Exochemistry Data. "K2-18b is not 'Earth 2.0' as it is significantly heavier and has a different atmospheric composition. However, it brings us closer to answering the fundamental question: Is the Earth unique?" 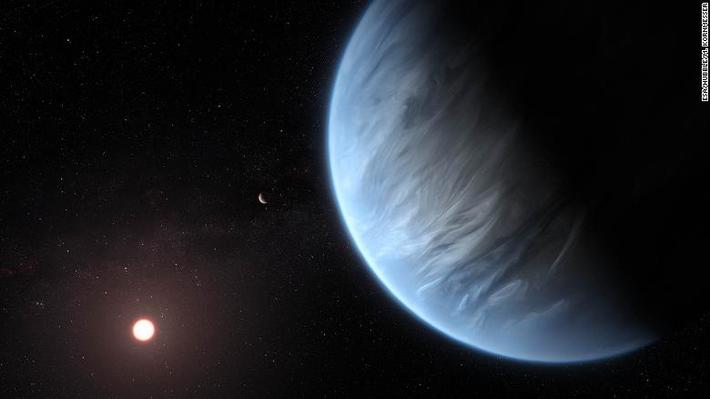 Comment by Juan F Martinez on September 2, 2019 at 9:07pm
Going MAINSTREAM folks, fasten your seat belts. It's no coincidence that this picture of Nibiru by the Sun is making the rounds. Q said, 'Watch the water."   9-2-2019 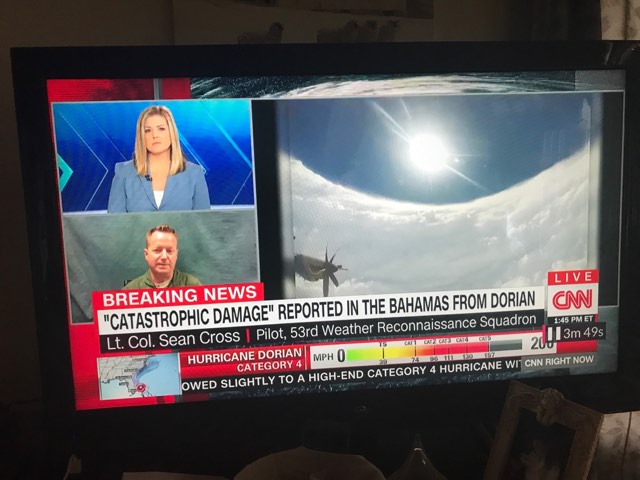 A newly discovered planet with three suns is exciting scientists for its close proximity to Earth and its potential for future observation, including possible signs of extraterrestrial life.
LTT 1445Ab is just 22.5 light-years away and was found using data gathered by NASA’s Transiting Exoplanet Survey Satellite (TESS), which searches for exoplanets.
The planet orbits just one of its three red dwarf stars, circling it every five days. It’s thought to be a third bigger than Earth, but has about eight times the mass of our planet and a temperature of about 320 degrees Fahrenheit.

“If you’re standing on the surface of that planet, there are three suns in the sky, but two of them are pretty far away and small-looking,” research co-author Jennifer Winters told New Scientist. “They’re like two red, ominous eyes in the sky.”