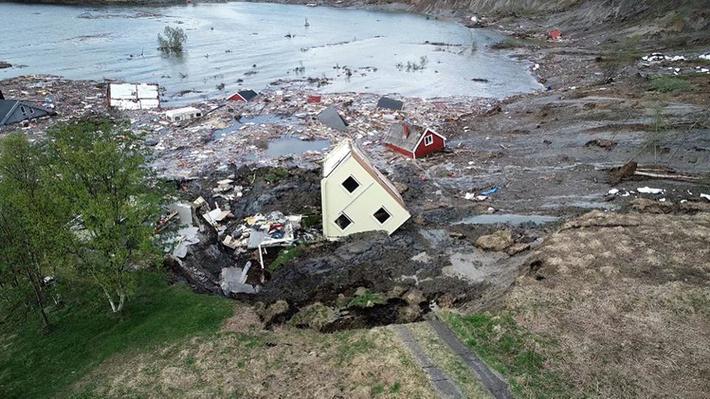 Eight houses were swept into the sea by the powerful landslide in northern Norway ANDERS BJORDAL/NVE
A powerful landslide of more than 2,000 feet in width has taken eight houses into the sea in northern Norway. The instability continued for several hours and one person was evacuated from a nearby property, but there have been no reports of injuries.
Incredibly powerful landslide caught on camera
The landslide of more than 2,000 feet wide and 500 feet high occurred on the western side of Kråkneset in Alta municipality on Wednesday afternoon. The police were notified of the incident at 3.45pm and a rescue operation was immediately launched by air and sea.
A local managed to capture some of the event on camera. The video, featured in Altaposten, shows the sheer power of the land movement. One local described how he heard a bang in the loft of his cabin and assumed someone was in the building. “I ran for my life,” he said, once the situation became clear.

Rescue operation over
Although police were unable to enter the area by land due to ongoing instability, the rescue operation was called off at 7pm with everyone accounted for. Police are now verifying the information received to confirm that no-one is left in the area.

Many of the buildings are holiday homes, which would have likely been fully occupied during the public holiday just 48 hours beforehand.

On-duty commander Sten-Rune Nikolaisen from the Main Rescue Centre reported to NRK that the Sea King helicopter returned to base just before 7pm. “They have searched visually and using camera equipment. No discoveries have been made,” said Nikolaisen. 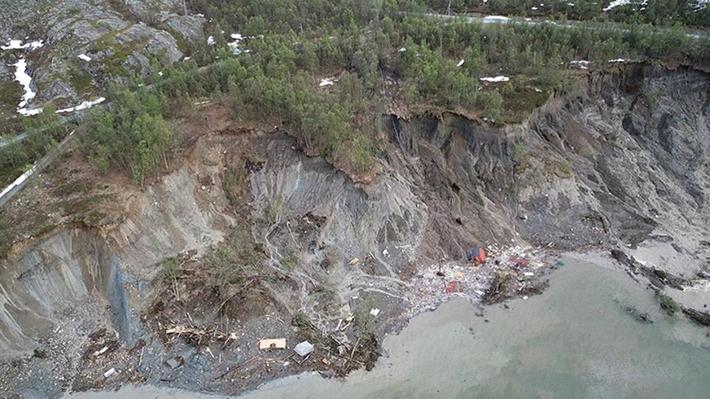 Land remains highly unstable
According to local media reports, several smaller landslides occurred in the hours following the main incident. The Norwegian Water Resources and Energy Directorate (NVE) is monitoring the situation, in particular the risk of more landslides.
NVE district engineer Anders Bjordal warned that there is likely to be ongoing movement for a couple of days. Twenty homes were forced to evacuate overnight after a cliff collapsed onto the beach below.
Kent Fire and Rescue Service arrived to a "significant cliff collapse" at Eastchurch on the Isle of Sheppey just before 10pm on Friday.
Residents of Surf Crescent said they heard “groaning” before a “great big lump” of the road disappeared from sight.
According to a local resident, the authorities were first warned in 2015 that action was needed to prevent further coastal erosion.
"This should have been dealt with a long time ago," Malcolm Newell said. "It's not right to have people's home, their livelihoods, falling into the sea." 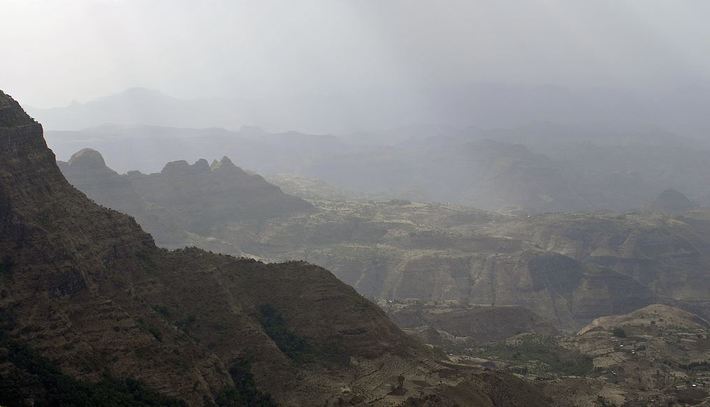 At least 12 people have been killed in central Ethiopia after floods wreaked havoc in the region, with five others still missing.
State-affiliated FANA Broadcasting Corporation reports that a subsequent landslide engulfed six homes, forcing families to flee the area.
Recovery effort are continuing to find the missing persons believed to be trapped beneath the rubble.
Officials are worried the region’s sloppy topography my prove to be a challenge in the recovery efforts.
An administrator from the Alu special Worda administrator however said the efforts will be intensified in order to locate the missing persons.
Currently, the regional government is working to relocate and shelter the displaced persons. 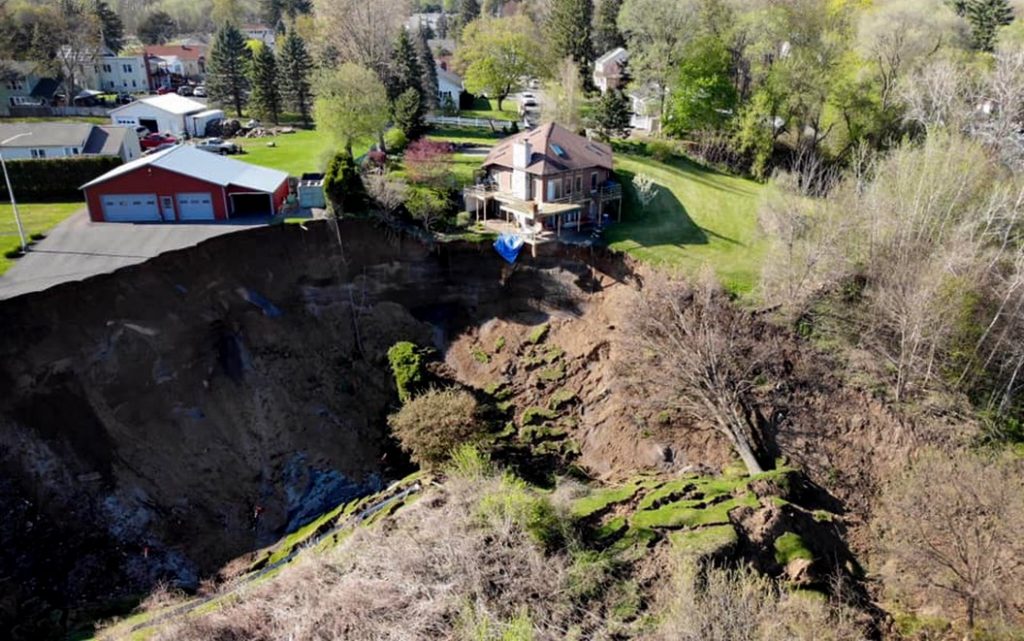 Photos of the slide in the town of Waterford, 12 miles north of Albany, show a massive crater that swallowed trees and left houses hanging precariously on the edge.

Part of a driveway on Middletown Road collapsed down a ridge about 80 feet into a canal below.

First responders arrived and quickly started evacuating homes near the 150 feet of land that had broken away.

The Saratoga Office of Emergency Services said several homes had to be evacuated, and three homes were affected. Four houses are still evacuated. That’s 12 people who were displaced.

However, no injuries were reported and no structures were totally destroyed.

Ecuador's two crude export pipelines were knocked out of service by mudslides.
The 450,000 b/d OCP heavy crude pipeline ruptured following the overflow of the Coca river, causing the suspension of operations yesterday at 6:30pm ET.
The 485km (301-mile) pipeline, controlled by foreign oil companies, runs from the Amazon oil district to the Pacific coast port of Balao in Esmeraldas.
In a separate incident at 8:15pm ET yesterday, a mudslide reduced pressure on state-owned PetroEcuador's 360,000 b/d Sote crude pipeline, prompting the company to suspend operations.
The 503km Sote pipeline also runs from the Amazon district to Esmeraldas.
The pipeline outages come amid a devastating local blow from the Covid-19 pandemic, particularly in the Pacific city of Guayaquil. The country has almost 4,000 declared cases and more than 200 deaths. 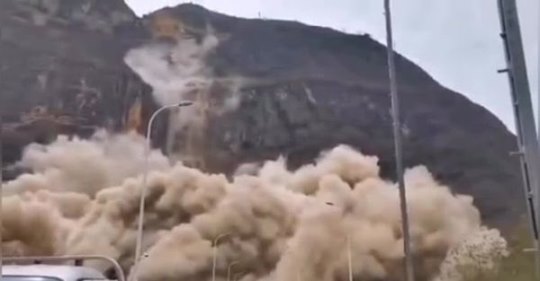 Captured today on April 7 in Sichuan province, the video shows a car almost got buried when a landslide occurred, stirring up tons of smoke and dust.

No casualties were reported and the local police issued a temporary traffic control notice. This video was provided by a local TV station.

SAVANNAH, TN (WSMV) - A third home along the Tennessee River is in jeopardy of sliding into the river after another landslide.

The home on Chalk Bluff is close to falling into the river after another landslide on Sunday.
The Hardin County Fire Department said in a post on Facebook that the owners of the home have moved everything out of it.
The home is near where two homes slid into the river in February after a landslide because of the recent rainfall. 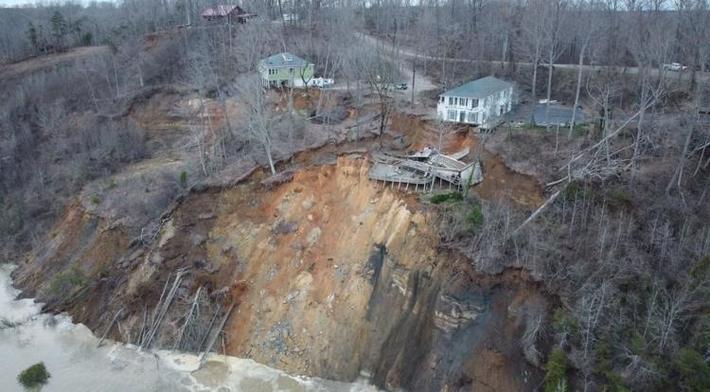 Home in jeopardy of falling into Tennessee River in Hardin Co. 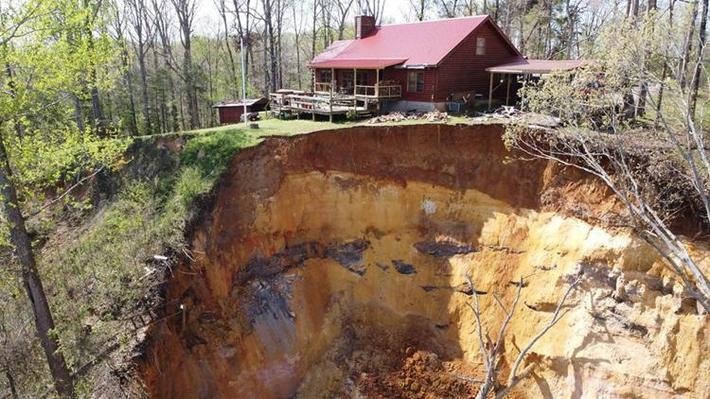 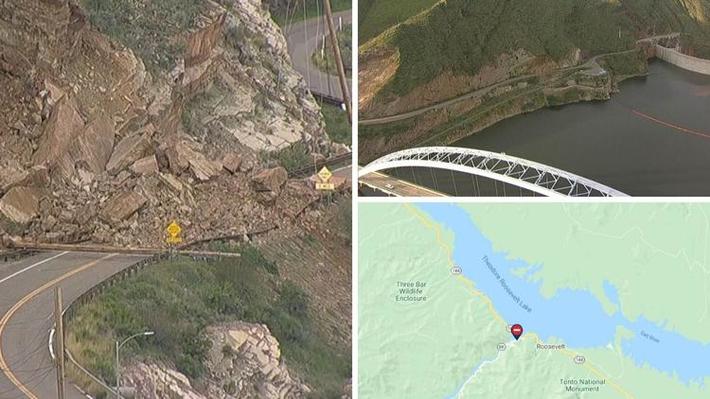 PHOENIX, AZ (3TV/CBS5) - A portion of SR 88, the Apache Trail, is closed near Lake Roosevelt today after a landslide dumped tons of rock on the roadway.
Officia

There were no injuries reported. There is no estimated reopening time; however, this is expected to be an extended closure while crews remove earth and rocks.

In addition, an unpaved section of SR 88 remains closed indefinitely between the Fish Hill Creek overlook at milepost 229 and the Apache Lake Marina turnoff near milepost 222 due to extensive damage that occurred last year from flooding out of the Woodbury Fire burn scar. Heavy rains caused several landslides compromising the historic roadway.

ls with the Arizona Department of Transportation reported the incident around 5:30 a.m. with a tweet. The National Disaster Management Office (NDMO) in Solomon Islands says the death toll from a landslide in west Guadalcanal is four but three people remain unaccounted for.

The slide in Lambi occurred on Thursday on the remote west coast.
Office director Loti Yates said it came as a severe low hit the region, causing heavy downpours and extensive flooding.
Bridges, roads and villages had been washed away.
"There are communities that have lost homes and properties and the NDMO has been working with the Red Cross and other NGOs to access non-food items, such as shelter kits, garden, kitchen and hygiene kits to be delivered," Mr Yates said.
Meanwhile, the Solomon Islands Meteorological Service has cancelled a heavy rain warning for the country.
The warning, previously in place for all provinces and conveyed thruogh the National Emergency Operations Centre, was this morning lifted. 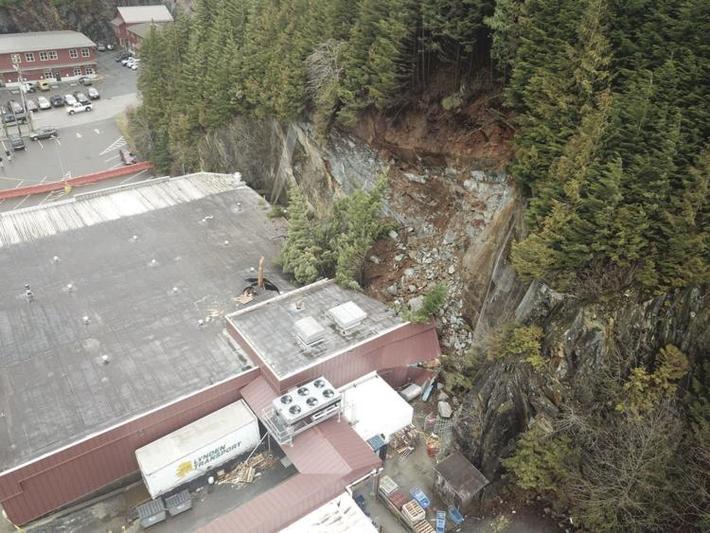 This aerial image shows the area from which rocks, dirt and trees slid from the hillside and into the northeast corner of the Tatsuda's IGA building early Thursday morning. Photo courtesy of Craig Thomas
Fallout from a rockslide that demolished the backside of a local grocery store Thursday might put the owners out of business after more than a century.