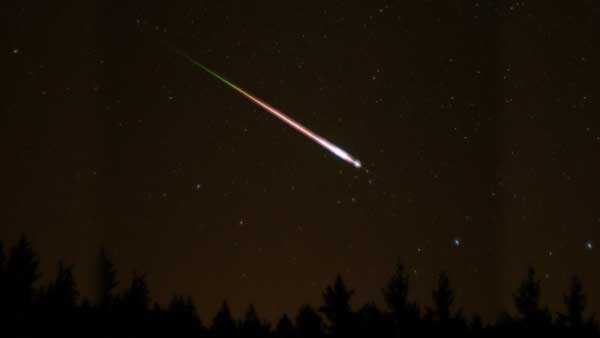 Did you see a fireball Saturday evening?

People reported seeing the fiery ball around 7:10-7:12 p.m. Only a few clouds were in the sky around that time.

According to the American Meteor Society, the same fireball was seen in Indiana, Kentucky, Pennsylvania and West Virginia.

NASA describes a fireball as an exceptionally bright meteor. They are visible over a very wide area.

If you saw a fireball streak across the sky on Saturday evening you’re not alone.10TV received several reports from people in central Ohio who saw a bright meteor with a long trail across the sky.

The American Meteor Society says it received more than 130 reports about the fireball, seen over Indiana, Kentucky, Ohio, Pennsylvania and West Virginia.

It was likely a product of the South Taurid meteor shower.

The shower is caused by leftover debris from Comet Encke. It’s not very active, you’re lucky to see five to seven meteors an hour at its peak, but it is known to produce fireballs.

Those are very bright meteors and they’ve been known to leave long streaks across the sky with this shower. 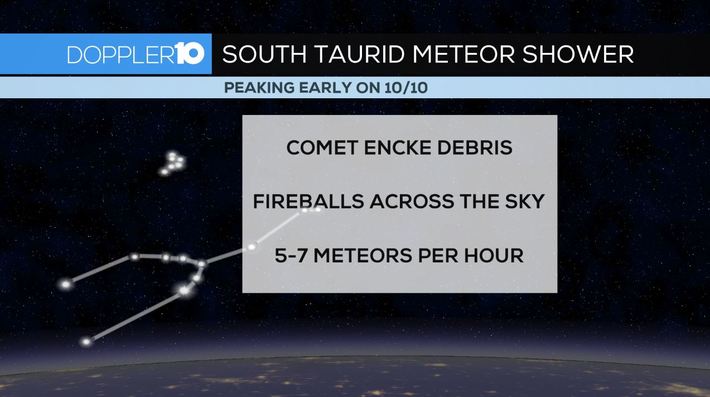 The shower itself peaks later this week - Wednesday night into Thursday morning - but has a large window of activity. It’s typically active from September 10th to November 20th.

This year’s peak coincides with a waxing gibbous moon which will wash out all but the brightest meteors. However, because it’s active for so long we’ll still have a shot at seeing fireballs through the month and into next month.

IRISH STARGAZERS were treated to an incredible sight on Friday night as a massive fireball lit up the skies across the country.

Reports from areas up and down the country told of a 'fireball' shooting across the sky between 7.30pm and 9pm on Friday, October 4th.

Primarily spotted in Limerick, Kildare, and Galway, it was also seen elsewhere in Ireland as well as Wales and Scotland in the UK, and some quick thinkers were able to grab videos of the space object flying overhead with a fiery orange tail trailing behind it.

The below video captured the 'massive' fireball as it travelled over the Claddagh area of Galway city.

Early reports suggested that the fireball was a meteor flying close to the Earth, but The Limerick Astronomy Club revealed that the impressive sight was the result of a Chinese navigation satellite which was launched into orbit in 2016 along with some debris.

The fireball is actually some of that debris re-entering the atmosphere.

In 2011, another massive fireball which was seen across Ireland launched a hunt for fragments of a meteor, which was suspected to have landed somewhere in the North-West of the country-- but nothing was ever found.

In 1999 however, fragments of another fallen meteor were found in a countryside lane in County Carlow and sold for a price 50 times greater than gold. 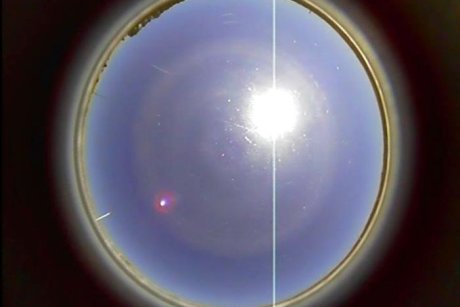 PHOTO A "sky cam" in Mareeba captured the fireball at 1:30pm yesterday.

Hundreds of residents in Far North Queensland have described how the ground shook after what is believed to be a meteor streaked across the sky in broad daylight.

It happened about 1:40pm yesterday and was seen and heard across an area spanning hundreds of kilometres away from Cairns.

Witnesses described seeing a "very bright flash of light," a "shooting star" and hearing an "explosion" and "sonic boom".

Astronomer David Reneke said it was most likely a "daytime fireball" — a type of meteor.

"Seeing one in the daytime is a special event, that's for sure," Mr Reneke said.

"They are slow-moving meteors that burn and melt and are generally associated with a lot of noise because they explode overhead.

"To actually witness one of these, you have to be in the right place at the right time — it's a very special event for anyone who has ever seen one because you'll never, ever forget it."

Cairns northern beaches resident Chris Slapp said she thought there "was an earthquake".

"The table was vibrating and I could feel it … through the ground," Ms Slapp said.

Another witness, Stephen How Kee, wrote on social media that it "looked like a shooting star" and when it stopped, it "left a cloud of smoke".

Mossman resident Alan Carle said he and a group of tourists also witnessed the phenomenon.

"There was a very bright trail of light that went through and it just exploded," Mr Carle said.

"Of course you couldn't hear anything because it was so far away, but a couple of minutes later we were standing there talking about it and we just hear this thunder, but there's not a cloud in the sky, so there's certainly no thunder around."

Geoscience Australia said it was looking into the incident.

A meteor described as a "massive fireball" was seen shooting through dense rain clouds in London.

Footage posted by the UK Meteor Observation Network showed it passing over East Barnet at about 19:55 BST on Tuesday.

The organisation's network of cameras monitor the night sky and record any meteor activity.

People described seeing the meteor on social media and said it turned blue, yellow and green as it passed through the sky. 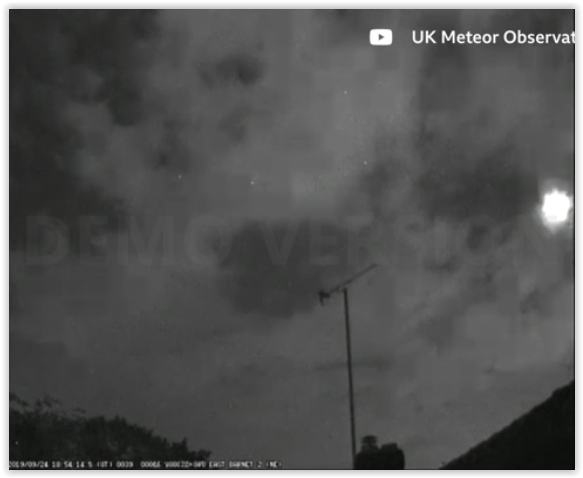 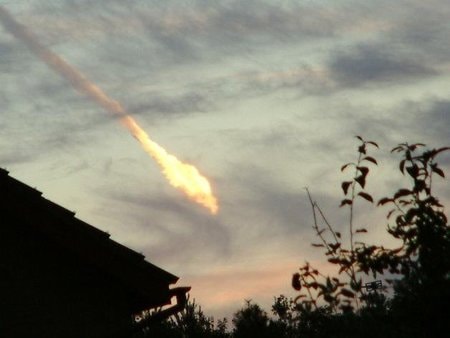 Report the Fall of a Meteorite in a Rural Area in Chiloe - Chile, the same meteorite caused a focus of fire in the sector. 09/25/2019. (From September 20, 2019) A fireball was seen around 8:25pm local time by people across the two states of Victoria and Tasmania in Australia. The sound produced by the meteor was compared to thunder by witnesses.
This video of the fireball was recorded by dashcam in Tasmania, Australia:

(From September 12, 2019) A fireball bright enough to be clearly visible during the daytime was seen around 2:50pm local time from multiple countries in Europe including Germany, Denmark, the Netherlands and Belgium. Over 500 reports were collected by American Meteor Society.
This video by kite surfer Dorian Cieloch shows the fireball as seen from the ocean off Wremen, Germany. The video is cued to play as the fireball appears to the kite surfer's left from about 1:12 to 1:15 of the video: London meteor SHOCK: Locals report huge fireball lighting up London sky
LONDON has illuminated by a meteor tonight, with many lucky locals taking to Twitter to discuss the appearance of the surprise space rock over the capital.

Fireball spotted over the Outer Banks

A fireball was spotted just off the Outer Banks Thursday night.

According to a NASA spokesman, observers along the Virginia and North Carolina coasts, as well as the North Carolina Triangle, saw it in the sky just after 8 p.m.

Initial calculation of the fireball's trajectory from 48 reports estimates that it entered the atmosphere off the coast of Morehead City and traveled northeast before breaking up east of Ocracoke.


Mystery ‘explosion’ heard over New York may have been ‘fireball falling from space’, meteor experts reveal 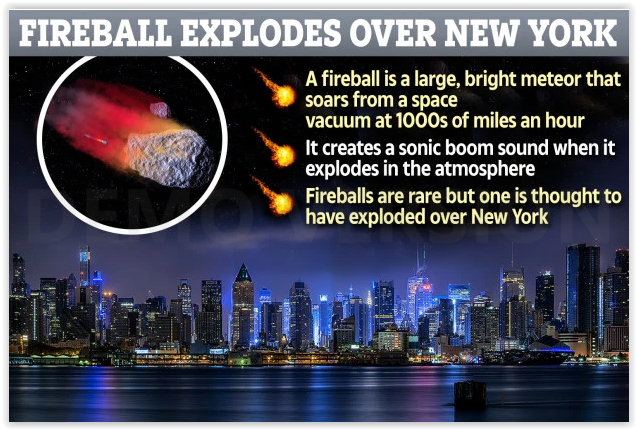 A FIREBALL is thought to have exploded over New York earlier this week as people reported hearing a loud boom and their houses shaking.

When it first happened people had no idea what was going on but now the American Meteor Society (AMS) may have the answer.

The AMS has said that witness reports of a "boom" and a bright streak of light in the sky was likely to have been a large fireball entering the Earth's atmosphere on Monday night.

One witness told The American Meteor Society: "It was so loud, my house shook, I felt it in my chest and had me stand still for a moment in panic.

"I got ready to load my children up with our emergency bags because I thought the power plant 12 miles away from me blew up."

The society received lots of reports about the incident.

Mike Hankey, operations manager of the non-profit meteor astronomy organisation, told CNN: "What they were seeing was the light produced by the object colliding with the atmosphere."

A fireball is a bright and large meteor that soars from a vacuum in space at 1000s of miles an hour.

It can explode when it collides with the Earth’s atmosphere creating light streaks and a sonic boom sound.

Witnessing fireballs is a rare event and they can be difficult to confirm as they happen so quickly.

Nasa actually has 17 cameras devoted to capturing images of fireballs over the US but the cameras are turned off in daylight to protect them from the Sun so they were not able to capture the recent event.

Most accounts from the New York event state that the light streak and noise lasted from between 1.5 to 3.5 seconds.

So far there have been no reports of any damage caused by the fireball.