Officials say a freight train traveling on a bridge that spans a lake in a Phoenix suburb has derailed, setting the bridge ablaze and partially collapsing the structure 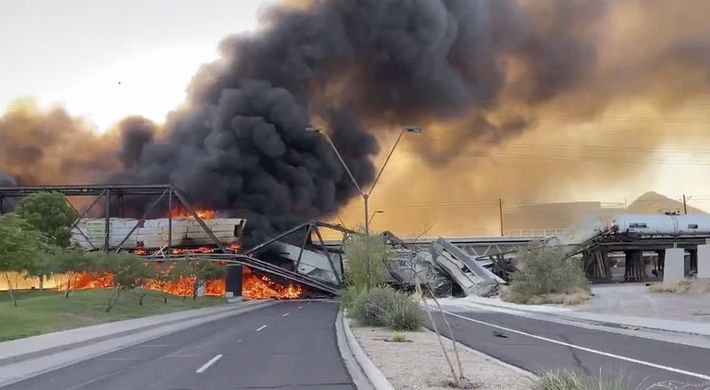 PHOENIX (AP) — A freight train traveling on a bridge that spans a lake in a Phoenix suburb derailed Wednesday, setting the bridge ablaze and partially collapsing the structure, officials said.

Video images showed huge flames and thick black smoke rising into the air and three train cars in a park next to Tempe Town Lake.

None of the train's crew members were hurt but there was a report of someone suffering from smoke inhalation, said Tim McMahan, a spokesman for Union Pacific Railroad. He said he did not know how many crew members were aboard when the train derailed.

Fire officials in the suburb of Tempe said the derailment happened at about 6 a.m. and that about 90 firefighters were at the scene.

Between eight and 10 of the train's cars caught fire, McMahan said. Several carried lumber and the three that fell to the ground beneath the bridge were tank cars.

Two were carrying cyclohexanone, a pale and oily liquid that is toxic and flammable. McMahan said a third tank car was carrying a “rubber material" but did not provide further details.

McMahan said the tank cars were not involved in the ensuing blaze and it appeared none of them had any leaks.

Investigators with the Federal Railroad Administration were dispatched to start a preliminary investigation, the agency said in a statement.

The bridge had its annual inspection earlier this month, McMahan said.

Fire witness Camille Kimball told AZFamily.com she was riding her bike in the park below the bridge minutes before the derailment.

“I turned around to look and got the fright of my life,” Kimball said. “Now there’s fire pouring into the lake from the middle of the bridge. ... It looks like a scene from hell, truly.”

The 2.5-mile (4-kilometer) Tempe Town Lake is is a popular recreation spot for jogging, cycling and boating and close to Arizona State University. 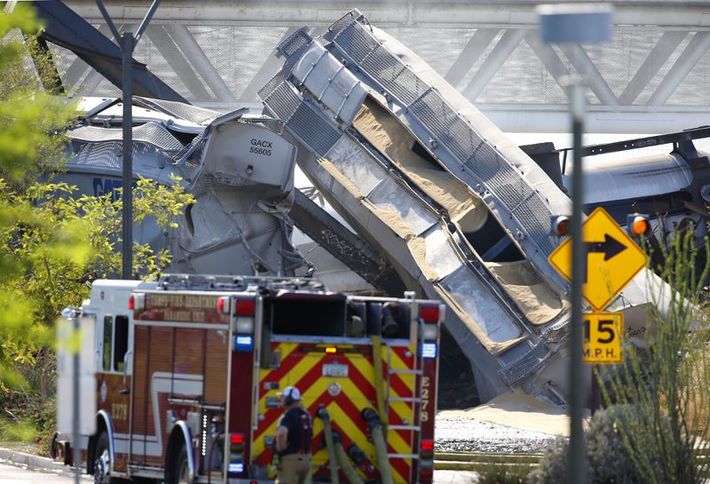 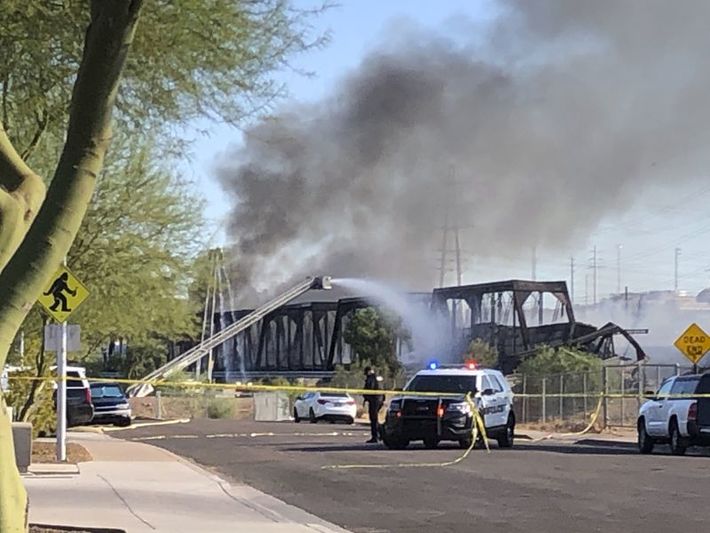 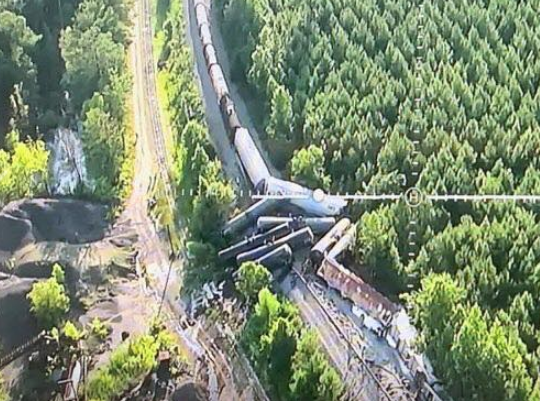 Officials are still trying to figure out how a Norfolk Southern train derailed outside of Tuscaloosa, Ala., late Saturday afternoon.

A total of 17 rail cars derailed, with one spilling vegetable oil at the scene. Tuscaloosa Fire Rescue, Tuscaloosa EMA and NorthStar EMS were among the first responders at the accident. The freight train was traveling east from New Orleans to Birmingham, Ala., when the cars fell off the tracks. No injuries were reported.

Norfolk Southern’s hazardous materials teams and contractors have been at the site cleaning up, but no word that those efforts have been completed. 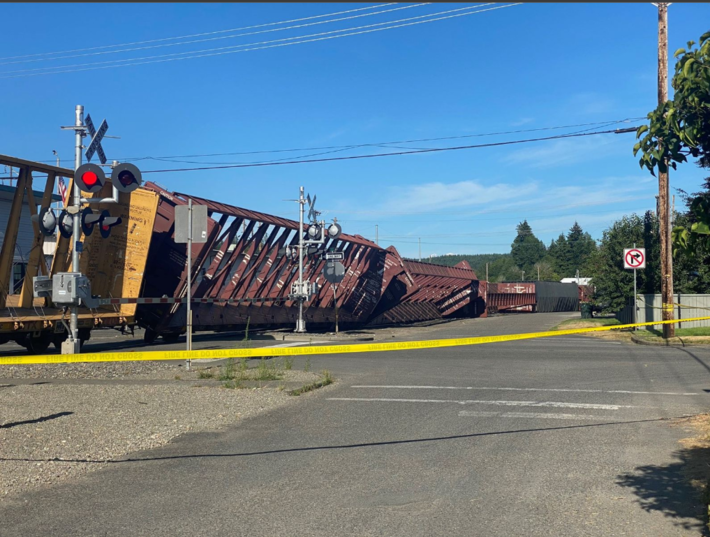 CENTRALIA, Wash. -- A train derailed in Centralia Sunday afternoon, leaving some streets in the area blocked.

No one was injured and no hazardous materials were involved, according to Sgt. Patricia Finch with Centralia Police.

Finch says Tower Avenue and B Street could remain blocked for up to three days for the cleanup.

There is no word yet what caused the train to derail According to the Crittenden County Sheriff’s Department, seven train cars left the track around 1 a.m. at Second Street near Highway 64.

No one was injured and no hazardous materials were involved, authorities said. 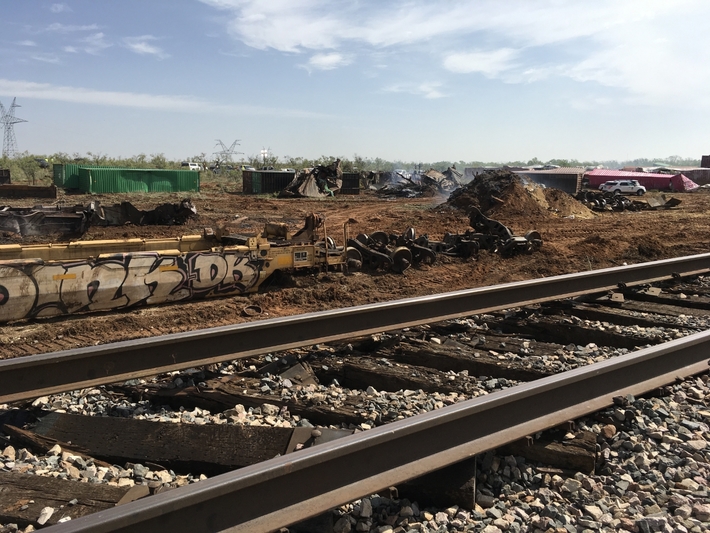 A mile-long swath of 80+ mph wind was likely the cause of a train derailment of 86 cars in Texas on Tuesday. The National Weather Service (NWS) office in Midland, TX confirmed the information Wednesday afternoon. The train was carrying cargo at the time.

The meteorologists’ report goes on to say that all of the damage was oriented in the same direction. That statement indicates the storm damage was likely due to straight-line wind, rather than a tornado. This swath of wind damage was estimated to be a little more than one mile in length with wind between 80 and 100 mph!

The train derailment damage occurred in northeastern Mitchell County, TX. A separate storm about nine miles southeast of Colorado City, TX caused damage in a cotton field. The storm “toppled a center pivot irrigation system, about 750 feet long” according to the NWS Midland office. The peak estimated wind with that storm is believed to be 65-70 mph.

This goes to show that severe thunderstorms are very powerful and can do similar damage compared to a tornado. In the short video below, WeatherNation Meteorologist Meredith Garofalo explains what straight line wind is and why it is so dangerous. Five fire tenders — two from Ongole and one each from Nellore, Kandukur and Kondepi — fought the flames for over three hours and brought it under control, Prakasam District Fire Officer S. Srinivasa Rao told The Hindu. “We were able to prevent the fire from spreading to other wagons,” he said after completing the fire fighting operation in time.
As the train derailed, two wagons fell into the dry riverbed with a loud sound, while another was left hanging. The fourth one was close to the railway track. However, 45 other wagons did not suffer any damage and proceeded towards Chennai later. Railway officials rushed to the spot to ascertain the cause of the mishap.

Train derails in Livingston Parish due to tree on tracks, knocks out power lines
June 25, 2020 7:11 AM WALKER- A train carrying non-toxic chemicals derailed at Walker's Corbin Avenue and Florida Boulevard/Highway 190 on Thursday morning.
The train derailed shortly before 6 a.m. due to a tree on the tracks. The cars also knocked down power lines as they left the tracks, causing outages in the area and creating a potential Hazmat situation.
Officials acted swiftly, closing Highway 190 and Corbin Avenue (both eastbound and westbound lanes) to address the situation

Walker Mayor Jimmy Watson elaborated on the situation, telling WBRZ that one of the four derailed train cars was carrying carbon dioxide, and the other three were, at one point, carrying ammonia, but the ammonia was removed prior to the derailment.
Officials say the main concern is that a live power line was pulled down during the incident. As a precaution, one person was evacuated from the area.
Louisiana State Police, Entergy, and the Department of Environmental Quality are on the scene, with State Police leading the response to the incident.
As Entergy deals with the live wire and power outage, DEQ is monitoring the air quality and reporting that the air quality appears to be clear at this time.
DEQ officials say, "Preliminary readings are non-detect for any airborne substances of concern. One refrigerated car is leaking non-toxic carbon dioxide which should dissipate quickly. We are still assessing the situation." A CN Rail employee says it happened around 8 p.m. – behind Mediterannean Restaurant on Rothesay Avenue (South of Rockwood Avenue).
Nearby businesses were closed for the evening as a precaution but reopened Sunday.
No injuries were reported.
Eight cars derailed — one an empty tanker previously filled with sulphur, the rest filled with potash and woodchips. 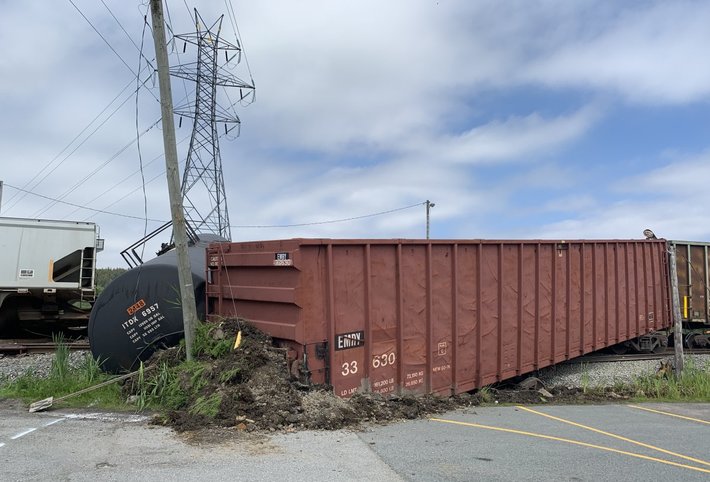 The cause of the derailment is still under investigation.. 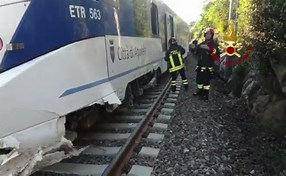 A regional train on the line between Venezia and Trieste was derailed at around 6 pm on June 22 by a landslide, Italian firefighters and local media said.
The train, servicing the area around Aquileia, was traveling near Bivio di Aurisina when it was derailed, with 20 passengers on board.
No one was injured, Italy’s national fire service, the Vigili del Fuoco, said. 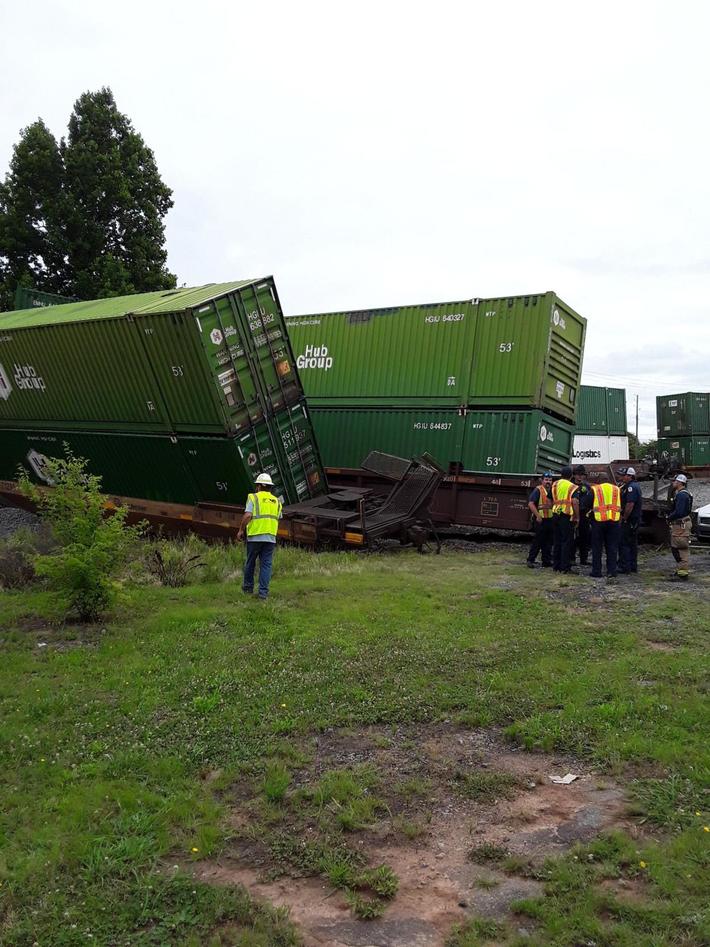 The equipment train experienced a slow speed derailment before 6 a.m. The Gladstone Branch is suspended in both directions between Murray Hill and Summit. 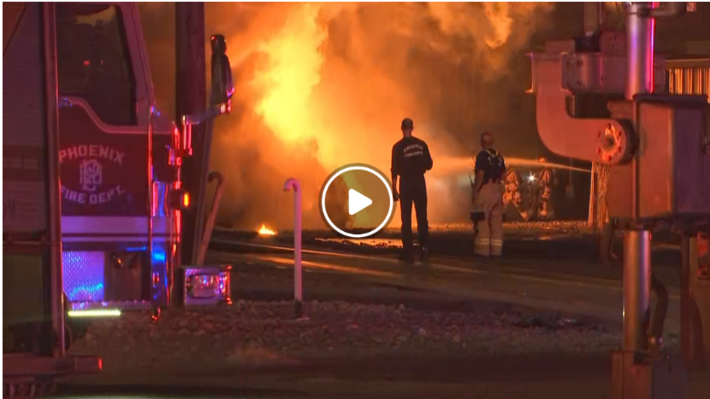 PHOENIX (3TV/CBS 5) - Investigators are trying to figure out what led up to a train derailment and fire on Friday evening in downtown Phoenix.
The big plume of black smoke could be seen through the downtown area. Flames were shooting out of the cars for more than an hour.

Fire crews were called out around 7:30 p.m. to the area of Ninth Avenue and Buchanan Street, which is south of Jefferson Street. When they got there, they saw at least two train cars on fire. However, there wasn't much they could do to save the train.
"They are generators on wheels, so spraying water directly on the car is a bad idea. It's not what we do," said Capt. Todd Keller with the Phoenix Fire Department.

Fire crews believe an engine caught fire after five of the train cars derailed, causing a diesel leak. They also got information that 11 cars back of the fire, there was ethanol in some of the cars so crews didn't want the fire to spread there. So, firefighters had to stay back and let the fire burn itself out. They protected nearby buildings by making sure the flames didn't jump.
"It's imperative we take our time with this," said Keller.
A Union Pacific spokesman said four box cars carrying plywood derailed while leaving a nearby rail yard. The locomotive caught fire. It's unclear why the train derailed.

Emergency responders took over about a square mile so they're asking everyone to avoid the area. Approximately 60 firefighters worked to extinguish the flames while even more crew members are managing the hazardous materials. The fire was put out around 9 p.m. No injuries have been reported and no buildings have been damaged. 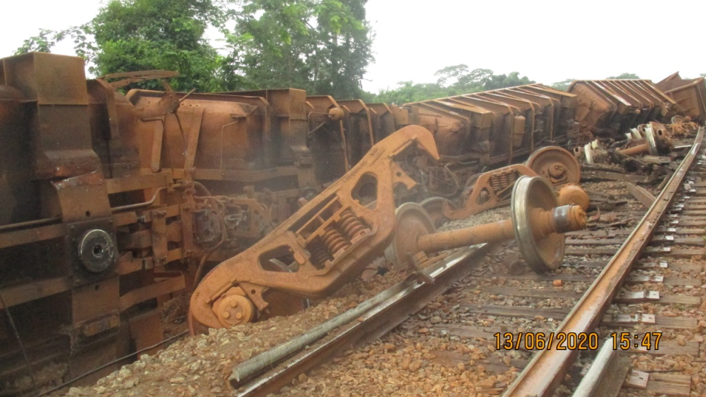 The locomotive of 90 coaches was transporting iron ore from the mine in Yekepa, Nimba County to the Port of Buchanan in Grand Bassa County for export when it derailed in District 2, Nimba County. No casualty has been recorded.

Zuluyee Town, Nimba County – One of ArcelorMittal locomotives transporting iron ore from Yekepa to Buchanan Port on early Saturday morning derailed, leaving about 30 coaches (buckets) of iron ore pouring to the ground and part of the rail damaged.

The accident occurred between the towns of Zuluyee and Tondin at about 4 a.m. in District 2, Nimba County.
The cause of the accident is yet to be established. It is, however, believed that there a mechanical fault developed between Sanniquellie and Ganta region.
There is no death or injury reported in the accident

Buckets the train was carrying were about 90 in number. The rest that left were carried to Buchanan.
Ms. Amanda Hill, Corporate Communications Manager of ArcelorMittal Liberia, told reporters that the company will come out with a statement and could therefore not comment further.
The damage of the railroad will cause the transporting of iron ore to be suspended.

This is the first accident to have occurred along the railway since ArcelorMital began operations. However, trains belonging to Mittal had in recent times killed two persons in separate locations that the causes of their encounter with the heavy machinery are yet to be established.
It can be recalled that a 40-year-old Guinean was killed by the train about two months ago while on his way from hunting for frog in the Zuluyee area.

In the Bunadin area in Loa Clan where the railroad passes, the body of another man was discovered there recently and it was established that he was killed by a train. These incidents occurred during the night.

Kitchner said approximately 50 cars derailed in the crash, which happened Saturday afternoon near milepost 107 on Interstate 80.

Three explosions were reported with one sending flames 100 feet in the air, officials said. 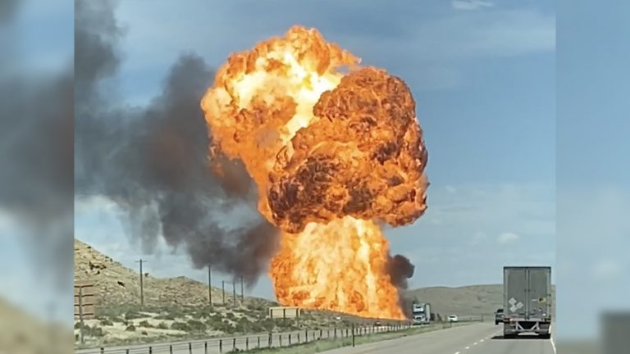 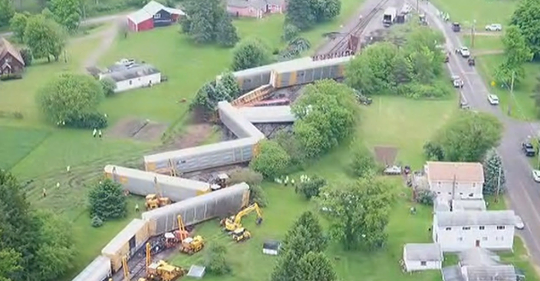 Portage, N.Y. - There are no reports of injuries following a train derailment early Wednesday morning in Livingston County.
A representative for Norfolk Southern tells 13WHAM a train carrying 13 cars derailed in southwestern Livingston County, near the hamlet of Hunt, around 4 a.m. No one was hurt, and no hazardous materials were released.
The train was said to be en route to Binghamton from Elkhart, Indiana. The cause of the incident is not yet known.

Norfolk Southern says its personnel are on scene to help clean up.