We'll be seeing an uptick in unusual home and business gas explosions and I'm trying to locate specific ZT on the matter.  Below is a refresher for the many gas related news articles.

Fault lines, when adjusting, do not just rip apart one day during a dramatic earthquake. They most often creep. Laying gas lines along or across a fault line is asking for an accident of this sort. Fault lines are also seldom so clearly delineated that one can go a mile in this or that direction and avoid their action. Where a slip-slide fault such as the San Andreas will often leave a clear line on the surface, this is only the surface action, not what occurs in the rock layers on either side which can fracture for a long way to either side during any movement. The gas company, or the age of the pipes, will be faulted but in truth the finger should be pointed in many directions. The public, who insist on living at such a scenic spot, is to blame. Officials, who zoned for housing are to blame. The public utility company, for allowing gas lines in the area, is to blame. But this will change nothing, while man continues to live on the San Andreas, even as it awakens. EOZT

The danger from radon gas will not be increased as a result of the pole shift. Radon gas is emitted by rock containing uranium, which is degrading. In normal circumstances, where air can circulate, it is disbursed rapidly as is any methane created by decay of organic material. The danger from these gasses comes from confinement - being trapped in a mine, a basement, or beneath the permafrost. The dangers are well known. For methane, it is explosions. An accumulation of methane gas can be identified by the smell of rotten eggs, or as some have described it, dirty socks or cabbage soup. For radon gas the danger is lung cancer, from the continual exposure to the radioactive air. Radon gas is odorless, and cannot be detected except by specialized equipment not in the hands of the average person.

In that the pole shift, or the Earth changes preceding the pole shift, can fracture rock and release pockets of either gas, survivors should be cautious about huddling in bunkers. You are safer out in the open air, or in a trench you have dug that will allow the pole shift winds to pass over you, but nothing to fall on and crush you. The fact that both methane gas and radon gas can accumulate in the bunkers of the elite is one of the reasons we have stated that they have dug their own graves. EOZT

Anyone watching the news, for instance the news on the San Bruno explosion in a distribution line close to the San Andreas Fault line, knows that gas in any form is a danger. Oil and gas refineries explode when rigid piping cracks. Oil or gas wells explode when the ground around them moves. And the gas distribution lines running under cities are no exception. They likewise will explode. Gas lines, whether along the street or within a home, are rigid. In some cases automatic shutoff valves can limit the amount of gas available for an explosion by sensing a drop in pressure, but this is always after the fact. The explosion has already occurred. Utilizing gas on a planet prone to earthquakes was a mistake to begin with, but man never thinks of the consequences when striving for modern conveniences. We have advised turning off the gas at the street, though when the street explodes and your neighbor's homes are on fire you are not likely to escape the holocaust. A better alternative is to live in an area where gas is not available, as in your rural safe location where you will be doing a form of camping while gardening. A campfire at night, for cooking and washing and a bit of friendly light before bed. Nothing explosive. EOZT

SOZT Answer: It is no accident that the New Madrid fault lies under the Mississippi River near Memphis, as rivers form in lowlands created when land pulls apart, separating the rock fingers and weakening support for the land. Thus, the Ohio River bed also is an indication of where rock fingers will pull apart. Two adjustments in Kentucky, a day apart, are not an accident, but an indication of the speed at which the stretch zone is starting to adjust. Rail lines are frequently an early harbinger of such adjustments, as they run long distances, whereas structures within cities, such as tall buildings, take up relatively little space and have a small footprint. Our warning that imploding cities will be experienced, before the hour of the shift, are in this regard. Be warmed, it will not just be your rail lines and gas and water mains that will shatter and be pulled apart during the stretch. The foundations of your tall buildings will likewise be vulnerable.EOZT

"They were trying to control it and found a source of ignition," according to Smith, who said four PGW employees and a firefighter were among the injured. He said some of the gas workers' injuries were serious. Row Home Explosion Sparks Fire That Spreads to 9 Other Homes

Authorities say an early morning house explosion in the eastern Pennsylvania city of Allentown blew off the front of the row home and led to a fire that spread to nine other homes, but no serious injuries were immediately reported. Row Home Explosion Sparks Fire That Spreads to 9 Other Homes

ALLENTOWN, Pa. (AP) — Authorities say an early morning house explosion in the eastern Pennsylvania city of Allentown blew off the front of the row home and led to a fire that spread to nine other homes, but no serious injuries were immediately reported.

Allentown fire officials said the blast was reported at 3 a.m. Sunday. One person initially unaccounted for was later found safe. One person was taken to a hospital for a minor injury and a firefighter was treated for a shoulder injury. Officials said more than two dozen people were displaced by the blaze.

Capt. John Christopher said crews were putting out hot spots but there was no longer an active fire. The cause of the blaze is under investigation. Christopher said arriving crews didn't detect any odor of natural gas. 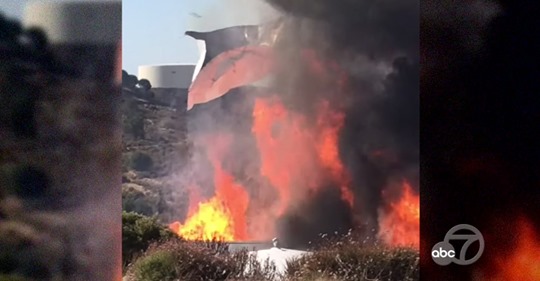 CROCKETT, Calif. -- As a fire raged at NuStar energy facility in Crockett, California, on Tuesday afternoon, an explosion that sent the top of a tank flying was caught on camera.

A witness shared a clip that shows a massive fireball created by the explosive chemicals. The roof of that container was sent flying in the air and floating back to the earth.

The fire prompted a hazardous materials emergency that led authorities to order about 12,000 people in two communities to stay inside with all windows and doors closed.
Emergency sirens blared and thick plumes of black smoke and flames filled the skyline around the facility in Contra Costa County.
"This is a very dynamic, rapidly evolving situation,'' Capt. George Laing of the Contra Costa Fire Department said. He said authorities received numerous reports of explosions before the fire and that the flaming tanks "are releasing chemicals that are still burning." 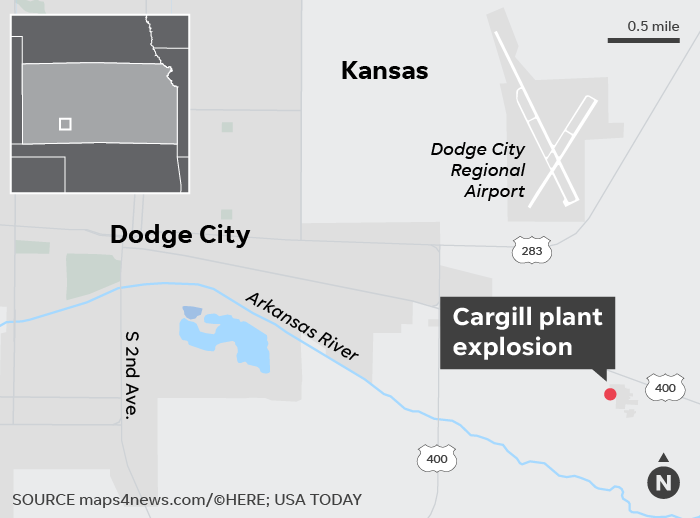 DODGE CITY, Kan. (AP) -- Two Cargill employees are being treated for burns after an explosion at a Cargill plant in Dodge City.

Cargill spokesman Daniel Sullivan says the explosion occurred early Thursday in a stand-alone building away from the main plant.

The two employees were the only people in the building. Their conditions were not immediately available.

Sullivan said the cause of the explosion is under investigation.

The plant stopped production for the day Thursday while the explosion is investigated. Sullivan said Cargill expected the plant to resume operations soon and said it will meet its commitments to customers.

By The Associated Press, AP

CCTV reported that 10 others who were injured are in stable condition. Over 200 rescue workers have been dispatched to the scene.

An overpass collapsed last week in the same city, killing three people inside a car.

Jiangsu was the site of a massive chemical blast in March, when nearly 80 people died in one of China's worst industrial accidents in recent years.

Two people were also seriously injured in the explosion in Dubai's Al Mankhool and have been hospitalised
Sun 29 Sep 2019 02:13 PM Two people were killed and another two injured following an explosion inside a building in Dubai’s Al Mankhool area, according to local media reports.

Sources quoted by Gulf News said the deadly incident was caused by a cooking gas explosion.

The two deaths were confirmed on Sunday.

The newspaper added that one of the dead was a gas technician, while the other was a resident who was playing near the flat with his daughter when the explosion took place.

The two injured were a female resident and a second gas technician, both of whom were admitted to Rashid Hospital with severe burns. It remains unclear what their condition is.

“There was some problem in the gas pipeline as it wouldn’t work. So my sister had lodged a complaint,” the injured female’s brother was quoted as saying by the newspaper.

“The two technicians came in the evening and as soon as they began checking the pipeline, the explosion occurred,” he added. “One technician and a resident who was playing with his daughter in the corridor died instantly. My sister and the other technician received 70 percent burns and are on the ventilator at Rashid Hospital.”

Dubai Police and other authorities have cordoned the building off and are investigating.

SEOUL/OSLO (Reuters) - A fire that spread across two oil tankers in a South Korean port injured 10 people on Saturday, coastguard and fire officials said, adding the blaze had largely been put out.
There were 25 sailors aboard, including Russians and Filipinos. Images of the strong explosions after a gigantic fire at the Lubrizol de Rouen chemical plant, Sept. 26.

Smoke rises from a fire at a factory of Lubrizol in Rouen, France, September 26, 2019, in this still image from video obtained via social media. © REUTERS / Blas Garcia Photography

A massive blaze at a chemical factory in Rouen, France has prompted officials to close schools and direct nearby residents to stay indoors, amid reports that the fire could have a dangerous impact on the environment.

Around 200 firefighters were called to the scene after the plant, operated by US multinational Lubrizol and owned by billionaire American investor Warren Buffett, caught fire in the early hours of Thursday. 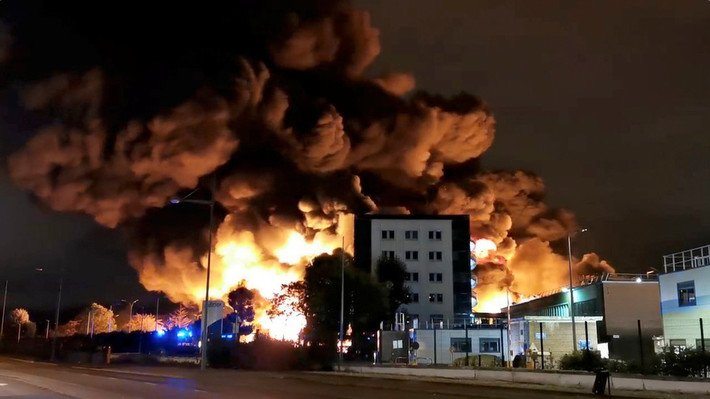 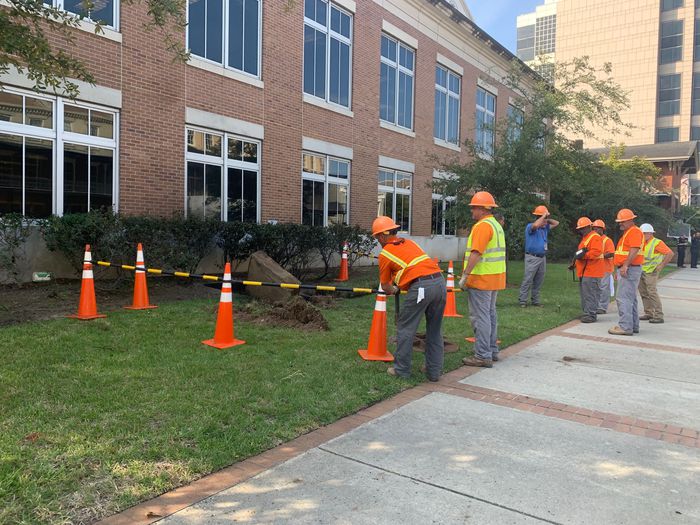 The source of the explosion is believed to be an underground transformer, although it’s not yet known what caused the incident. Eyewitnesses at the scene say a manhole cover outside of the Probate Court was sent flying. It landed a couple feet away and rolled back into the hole it covered.

None of the eyewitnesses said they witnessed the explosion, but many in downtown Mobile felt it. The explosion “shook downtown,” according to multiple sources at the scene. The power returned at about 9 a.m., according to Alabama Power. No injuries were reported and the buildings closest to the explosion evacuated.

The cause of the explosion is unknown at the moment.

Explosion at Chemical Factory in CHINA    September20, 2019
The force of the explosion caused glass panes to implode on people dwelling about 1 mile away. It resembled the power of a nuclear explosion, which occurred in a chemical factory.